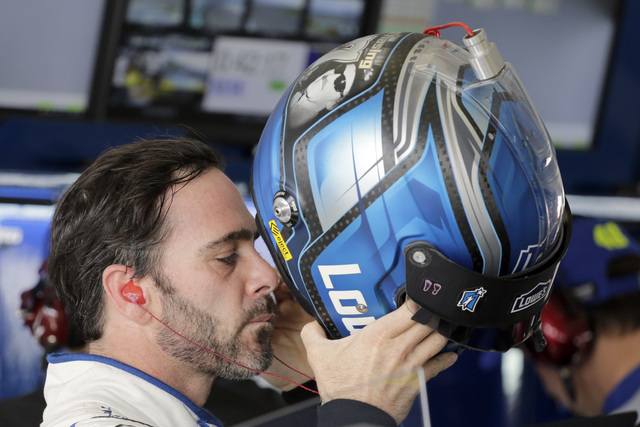 Jimmie Johnson comes into Sunday’s season finale at Homestead-Miami Speedway as the favorite to win his record-tying seventh Sprint Cup championship, and he showed during Saturday’s final practices that he’s worthy of the status. But Johnson is in the unusual position of having to likely win at Homestead to win the title, one of four tracks he’s never won at over his career.

He has 79 career victories, but is 0-for-15 at Homestead, a 1.5-mile, high-banked track that should ideally fit his style. His previous six titles were all celebrated at Homestead, but in each of those situations it was under old Chase rules where he had a cushy points lead with a mindset of staying out of trouble and simply finishing the race. This time, there are no points among the Championship 4 contenders where the best finisher wins the title. The past two seasons saw the eventual champion have to win the race.

During Saturday’s early practice session, Johnson posted the fastest lap (174.345 mph), which continues a trend on 1.5-mile tracks since the Chase started that he’s equipped to be the best. Since an August test session at Chicago, Johnson has averaged a sixth-place finish on the four 1.5s run during the Chase, including a Charlotte win where he led a race-high 155 laps.

Should Johnson finish ahead of Carl Edwards (3-to-1 odds to win the title), Las Vegan Kyle Busch (13-5) and Joey Logano (3-1), his seven championships would tie NASCAR legends Richard Petty and Dale Earnhardt Sr. for the most in series history.

While I’d love to see Busch go back-to-back just because he’s got the local flavor, and Edwards and Logano are certainly deserving of their first title, everything points to Johnson making history.

The past two Homestead winners were eligible to win the Sprint Cup, but while the Championship 4 do their thing, there are 36 other drivers trying to win to close out their season with a bang. Here’s a look at a few of the top candidates:

* Kevin Harvick (6-1) has a series-best 7.2 average finish in 11 Homestead starts and starts from the pole. He was runner-up last season and won for the first time there in 2014. He’ll be using a chassis that sat on the pole in October’s Charlotte race and it had the best 10-consecutive lap average during happy hour.

* Chase Elliott (12-1) has had an incredible rookie season and makes his Cup debut at Homestead. He had the second-fastest lap (173.332) during Saturday’s early session and was fifth fastest (172.408) during happy hour.

* Denny Hamlin (20-1) has won twice at Homestead when being out of contention for a title, the last time in 2013, and showed during final practices that he’s a contender to win with the second-best 10-consecutive-lap average during Saturday’s early session.

Johnson and Logano may have some track history going against them just because of starting outside the top 10. In 17 Homestead races, 12 (70.5 percent) have been won from start positions inside the top 10. The last three winners started from within the top five. The deepest a winner has ever started was 38th by Hamlin in 2009.

Ryan Newman’s last win came in 2013, and 123 races have passed since then which is why he was offered at 100-to-1 odds to win this week. The team he drives for, Richard Childress Racing, also hasn’t won a race since 2013, the last year Harvick drove for it. But Newman becomes a worthwhile investment to do something that hasn’t happened in four seasons just because he had his best practice weekend of the season. He laid down the fastest lap (175.387 mph) during Friday’s first session, then qualified third. On Saturday, he had the ninth-fastest lap (172.150) in the early session and was third fastest (172.723) during happy hour. With those type of speeds and desperately starving for a win, he still offers value even if getting only 60-to-1 odds.