Before he would finish seventh after starting 39th in his final drive at the Daytona 500, Brendan Gaughan spoke about his frightening flip at Talladega Superspeedway last year that almost foreshadowed what was to come in NASCAR’s ill-fated season opener.

The part-time Cup Series driver, who plans to retire after October’s race at Talladega, recalled joking about it afterward with fellow Las Vegan Kyle Busch. Busch, the eventual 2019 NASCAR champion, also was involved in the spectacular crash that occurred a moment after Gaughan had taken the lead.

“We all know I have issues upstairs,” Gaughan said.

But when Ryan Newman flipped at the end of Monday’s rain-delayed Daytona 500, there was no frivolity. Unlike Gaughan, whose car landed on its wheels at Talladega, Newman suffered serious injuries after his car flipped, rolled and was struck broadside by another car.

The harrowing crash has the NASCAR garage on edge heading into Sunday’s Pennzoil 400 at Las Vegas Motor Speedway.

Here are three things to look for as the Cup Series begins its annual West Coast swing:

Scary moment in the final laps of the #1000Bulbs500 at @TalladegaSuperS as the 62 car of Brendan Gaughan crashes and does a complete flip. pic.twitter.com/Tri28lX6rw

Las Vegas Motor Speedway has an outstanding safety record when it comes to NASCAR racing. There has been only a handful of injuries since the track opened in 1996, the most serious probably being Austin Theriault’s broken back in 2015 after he clouted the Turn 4 wall in a Truck Series race.

The only driver to get upside down was Randy LaJoie, whose car rolled onto its side and then onto its roof during an Xfinity Series race in 1998.

Keselowski has finished no worse than seventh in his past nine Las Vegas starts. Should he win for the fourth time Sunday, it would tie him with seven-time Cup Series champion Jimmie Johnson for the most LVMS victories.

Ryan Blaney, who rounds out the three-car Penske stable, also has run well at LVMS with three top fives in seven starts.

Four Las Vegas drivers will be making left-hand turns during the weekend, which is a lot for a city not exactly known for its auto racing past.

Reigning Cup Series champion Kyle Busch and older brother Kurt, the 2004 NASCAR champion, will drive in Sunday’s Pennzoil 400. Kyle Busch also is entered in Friday’s Truck Series Strat 200 and will compete in a late model race at the LVMS Bullring on Thursday night.

Youngsters Noah Gragson, coming off his first Xfinity Series victory at Daytona last week in a car owned by Dale Earnhardt Jr., and Riley Herbst will get the green flag in Saturday’s Boyd Gaming 300. 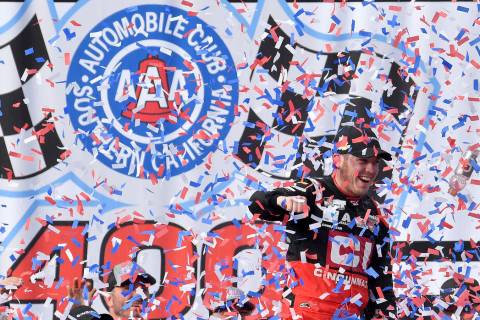