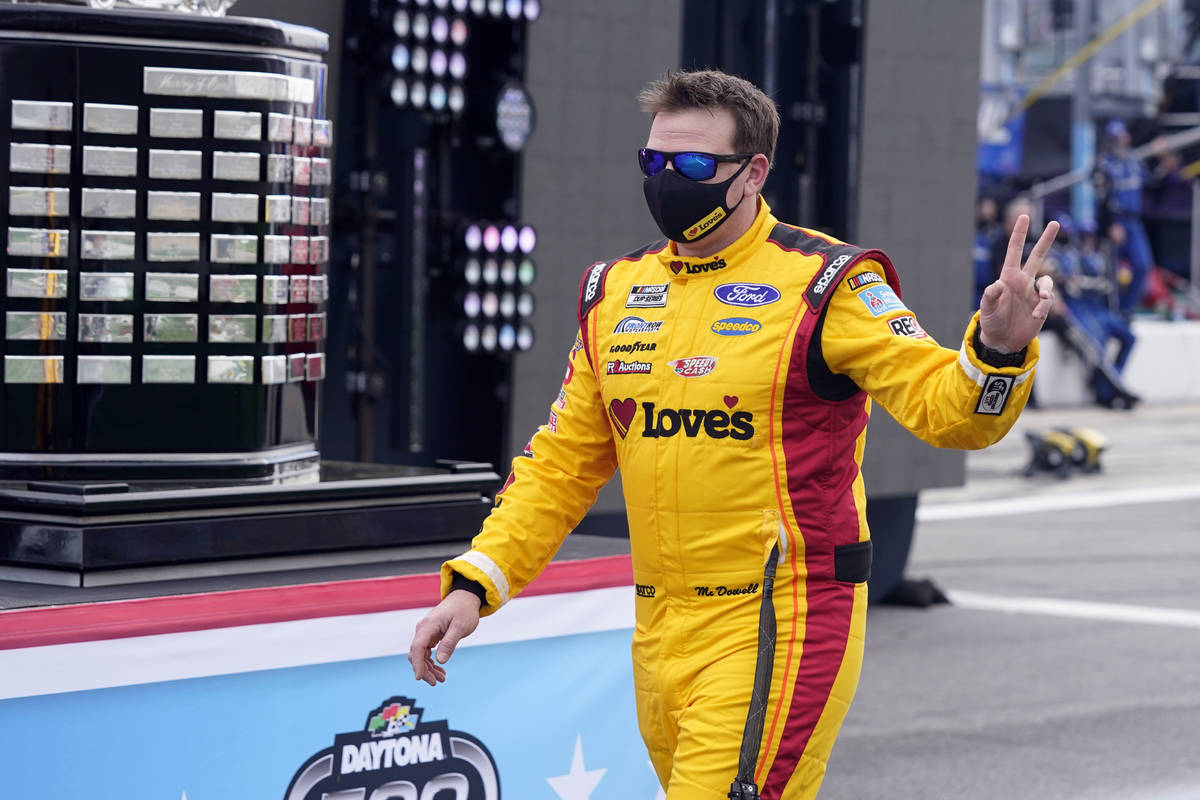 Michael McDowell walks by the championship trophy before the NASCAR Daytona 500 auto race at Daytona International Speedway, Sunday, Feb. 14, 2021, in Daytona Beach, Fla. Michael McDowell followed his Daytona 500 victory with a pair of top-10 finishes. That's three in three races, one shy of his total from all of 2020. Perhaps his Front Row Motorsports team really has turned the corner. (AP Photo/John Raoux)

It used to be the three words most often used in conjunction with NASCAR were “rubbin’ is racin’, a folksy reference to the bumping and grinding that is so much a part of the sport.

But after the first three rounds of the 2021 season, the mantra has become “expect the unexpected.”

McDowell won the season-opening Daytona 500 crap shoot before Bell took the checkered flag on the Daytona road course. It was the first career victory for both. Byron earned his second trip to victory circle by winning last week at Homestead, Florida.

“I don’t know anybody who would have seen such a thing coming,” McReynolds said of the topsy-turvy results heading into Sunday’s Pennzoil 400 presented by Jiffy Lube at Las Vegas Motor Speedway.

But the NASCAR cream usually rises to the top at the 1.5-mile LVMS oval, one of several intermediate-sized tracks upon which playoff berths and championships often are decided.

While the regular threats are expected to return to form Sunday, that also was the case last week when Bryon won on the mile-and-a-half track at Homestead. He called the victory a confidence builder and a huge step toward stringing together wins and improving his standing within the Rick Hendrick Motorsports stable.

“That was our goal, to be in that top six to eight guys that can win every week,” Byron said. “It’s a good start. We’re ahead of schedule.”

Added McReynolds: “I know William Byron had won a race, he’s at Hendrick. But if you would have asked me Saturday night to give you 12 drivers to watch on Sunday at Homestead, William Byron wouldn’t have been on that list.”

Byron’s previous best finish at Homestead was ninth. Kurt Busch, who broke an 0-for-21 winless streak on his hometown track by winning last fall’s LVMS playoff race, used a Kentucky Derby analogy to describe the early season jockeying for position.

“You have all those horses that have a shot at it — one leads, one drops back and then by the end of those two minutes you see those front runners. And we’ll get there,” the Las Vegas veteran said of the long haul to the championship.