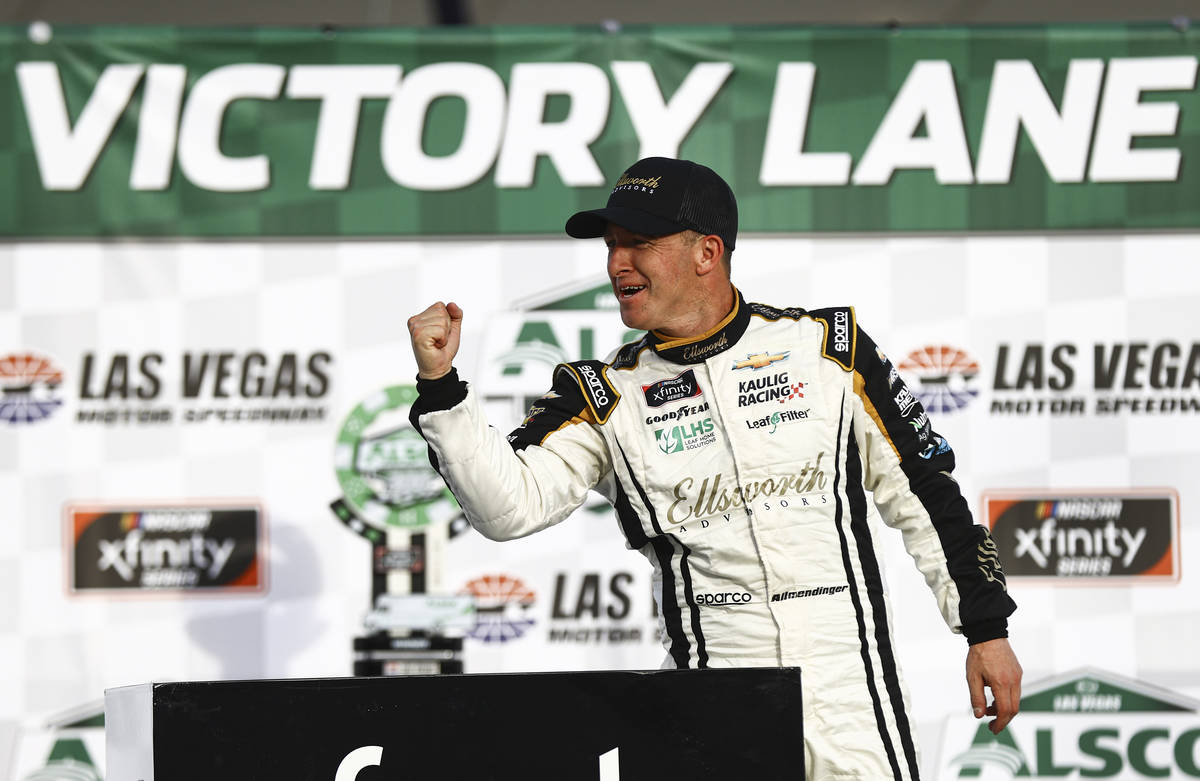 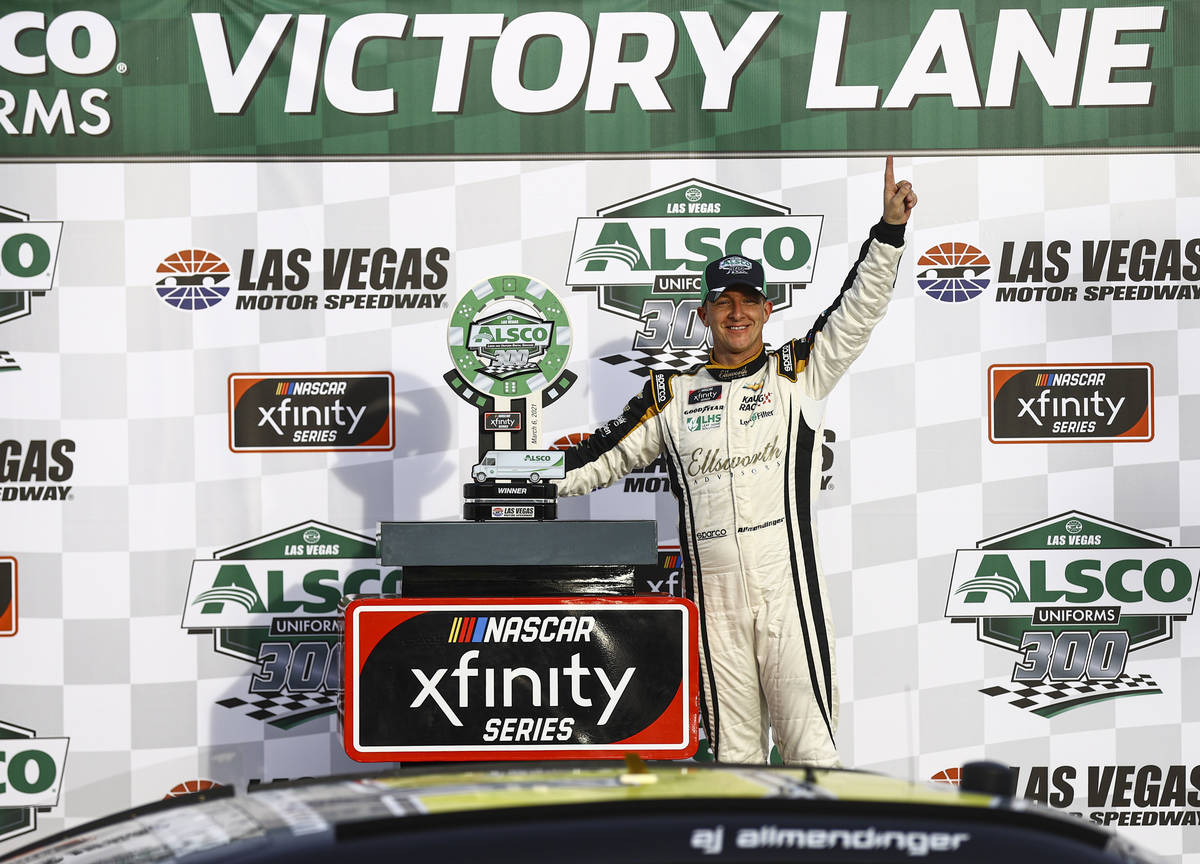 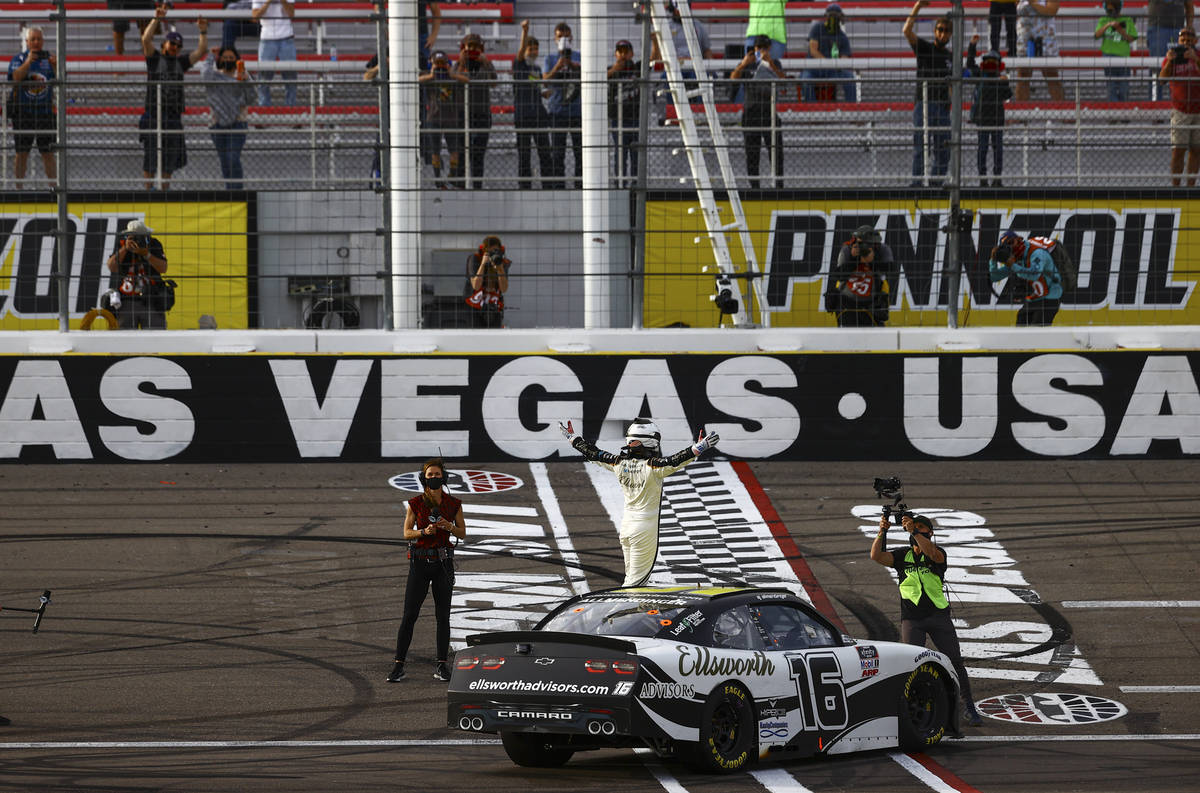 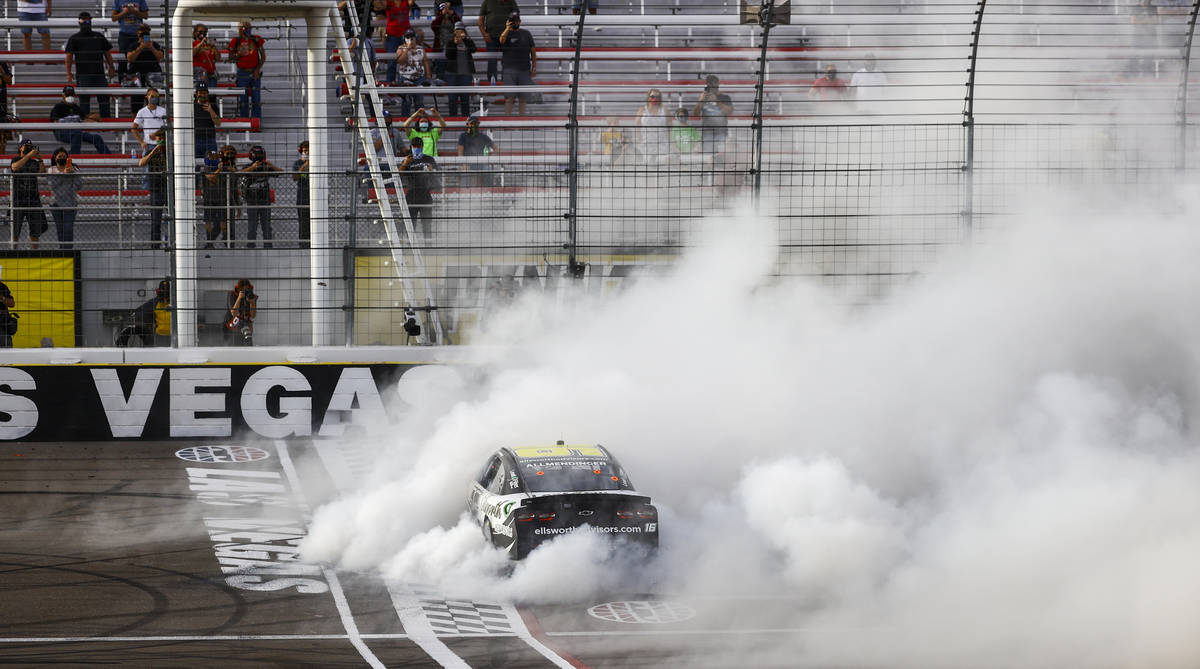 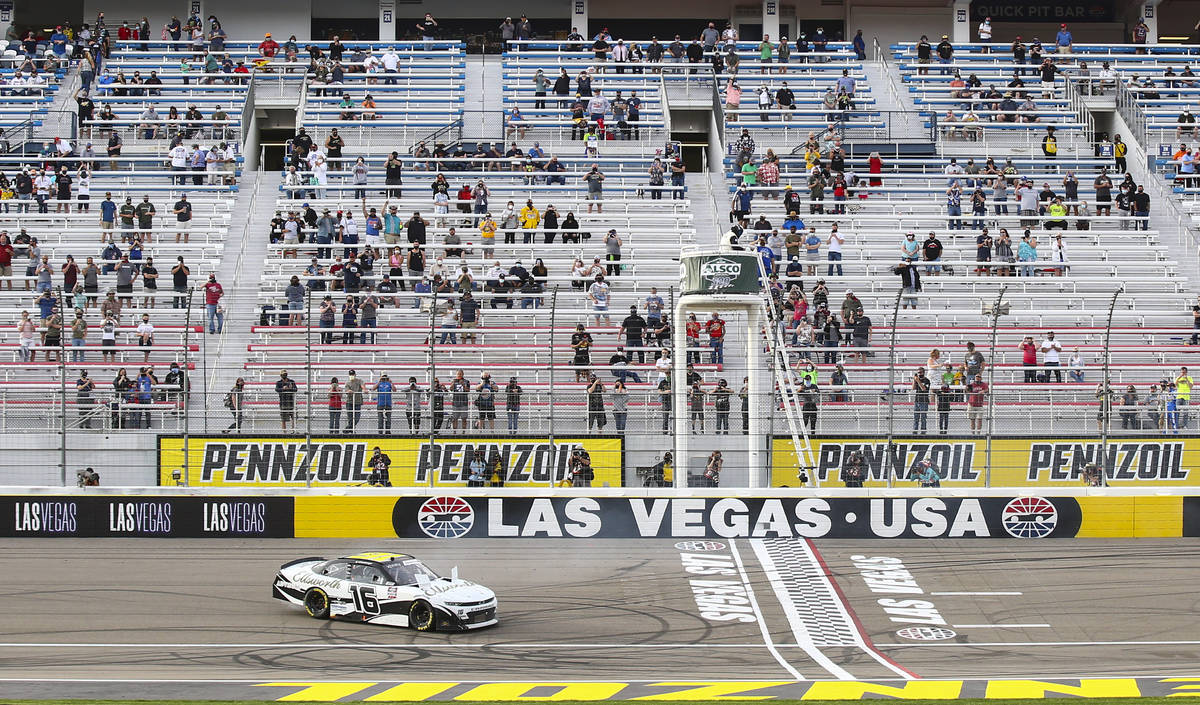 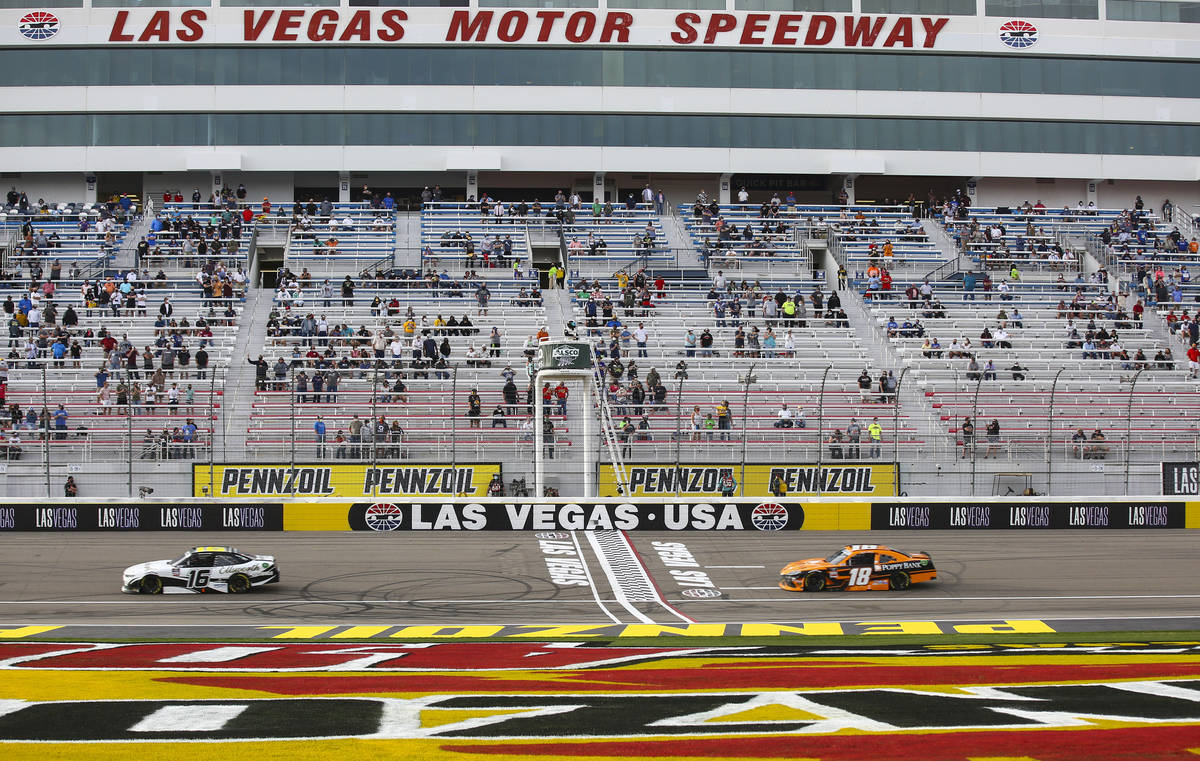 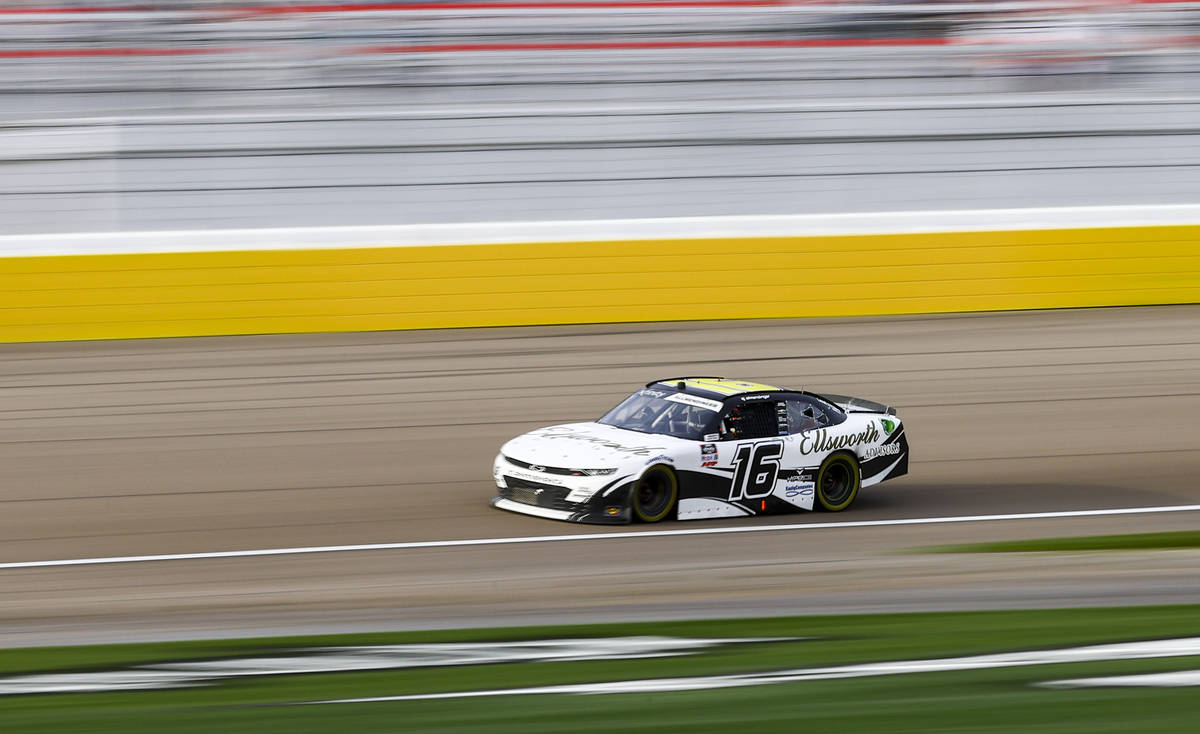 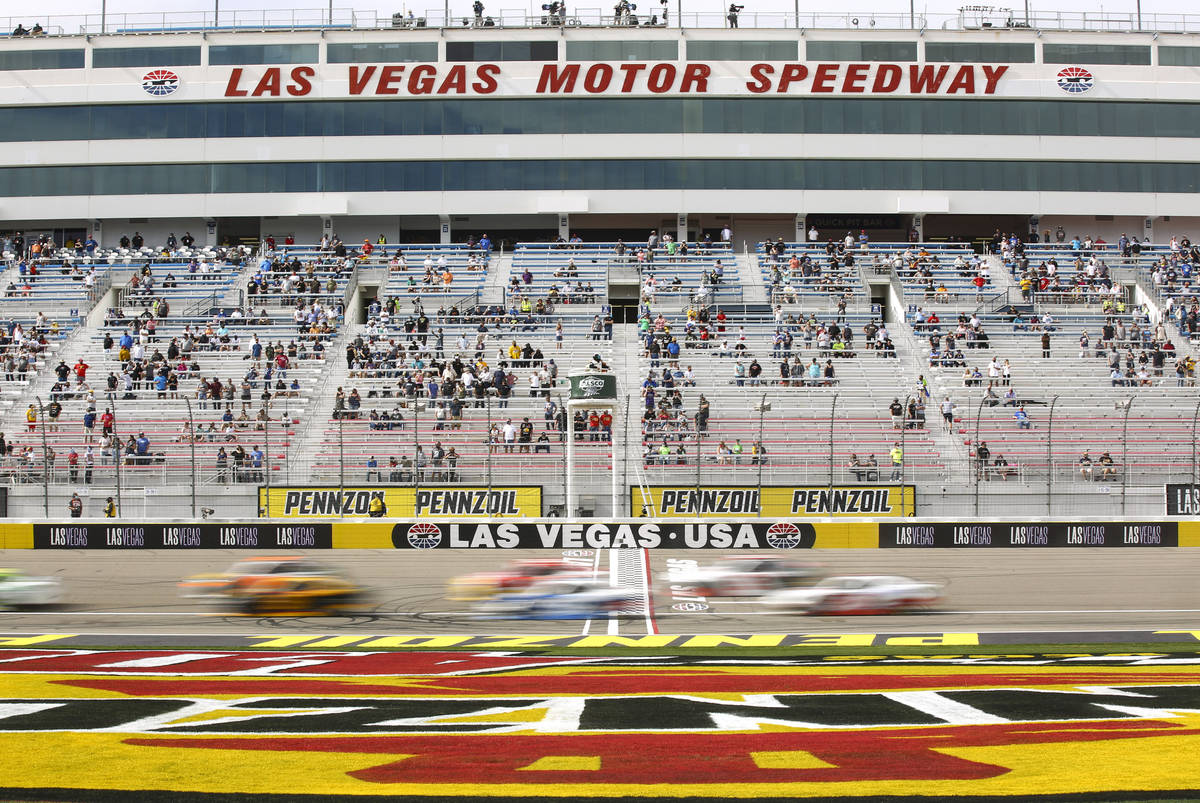 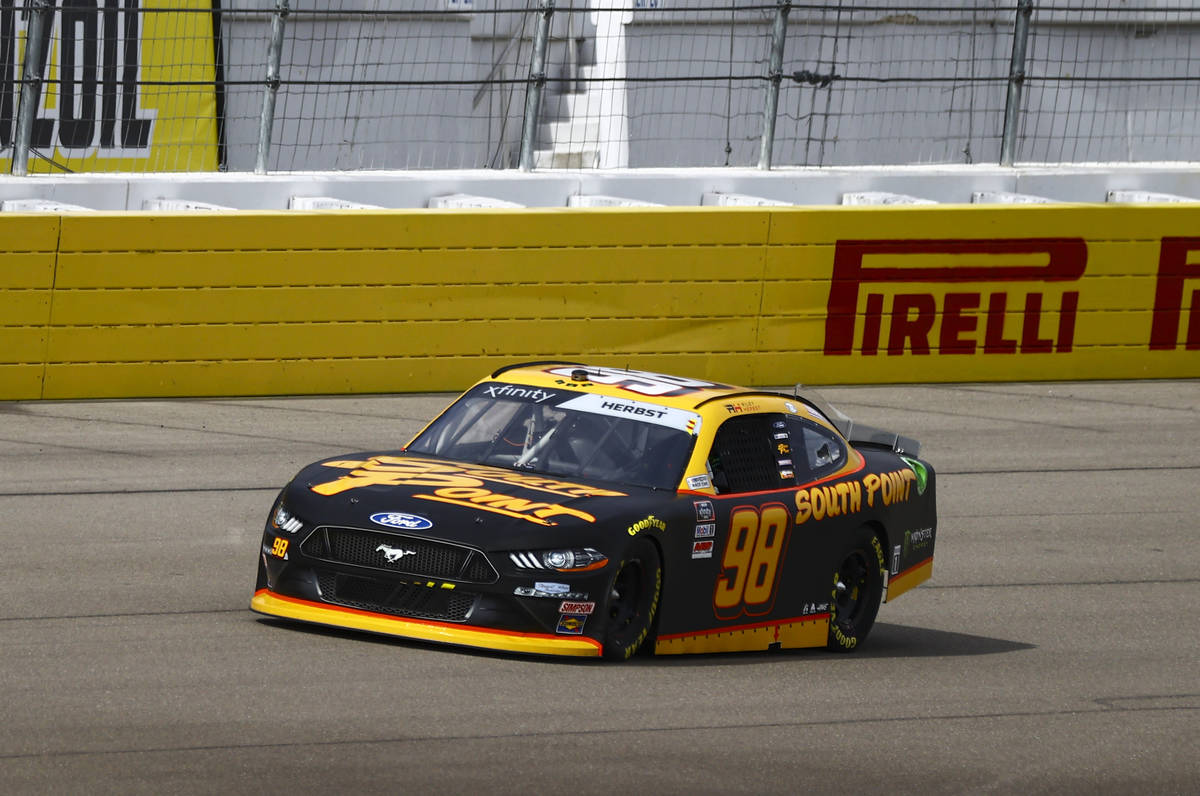 Riley Herbst drives before making contact with another car which forced him out of the race due to damage in a NASCAR Xfinity Series auto race at the Las Vegas Motor Speedway on Saturday, March 6, 2021. (Chase Stevens/Las Vegas Review-Journal) @csstevensphoto 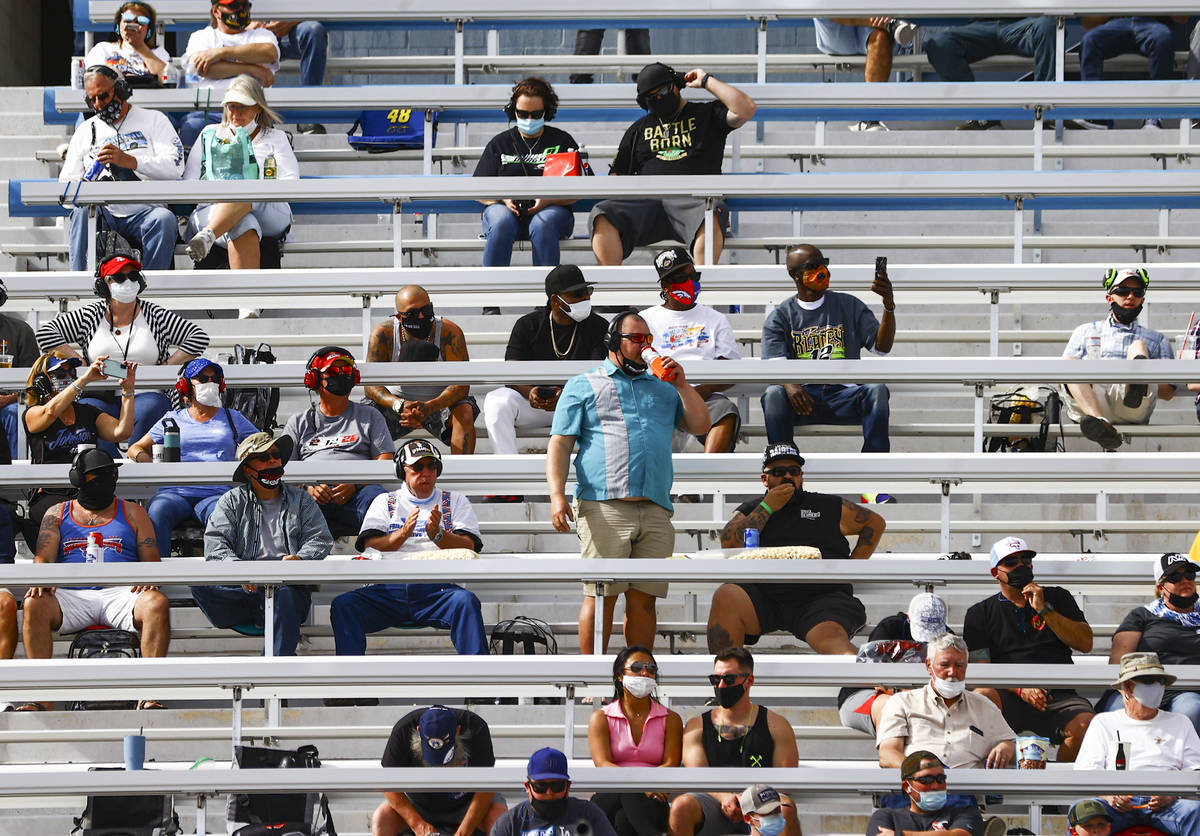 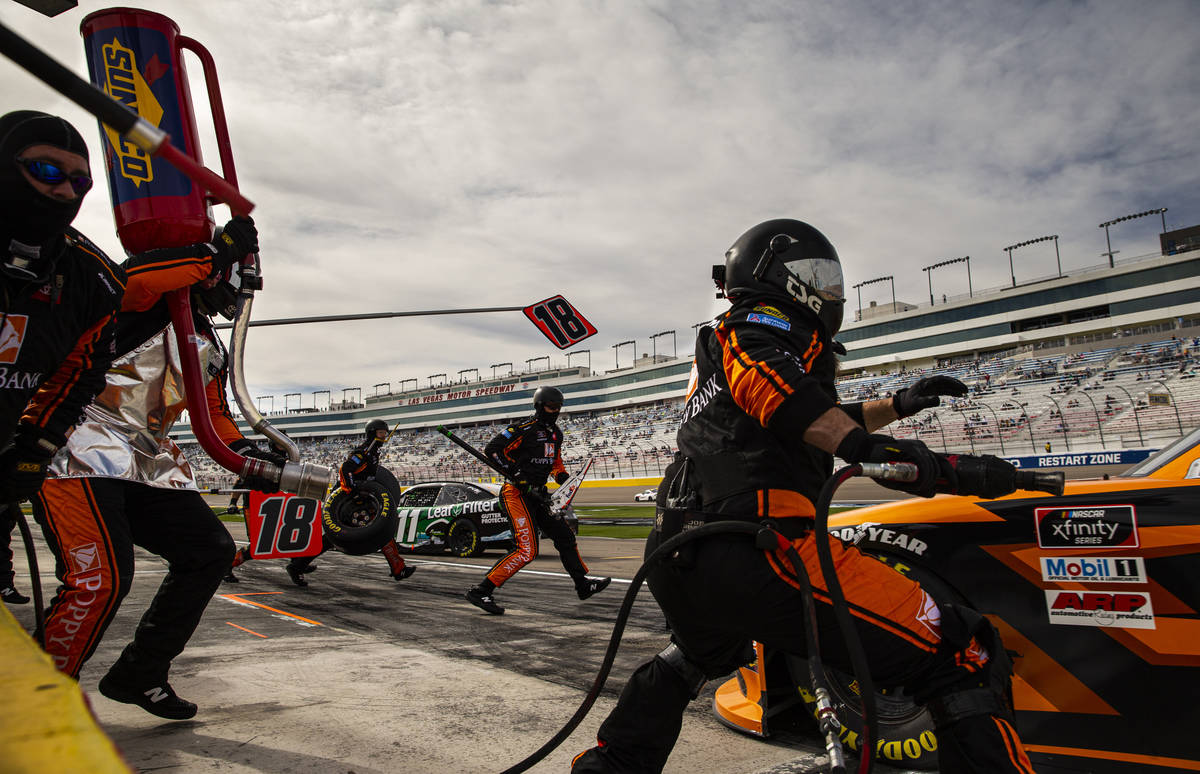 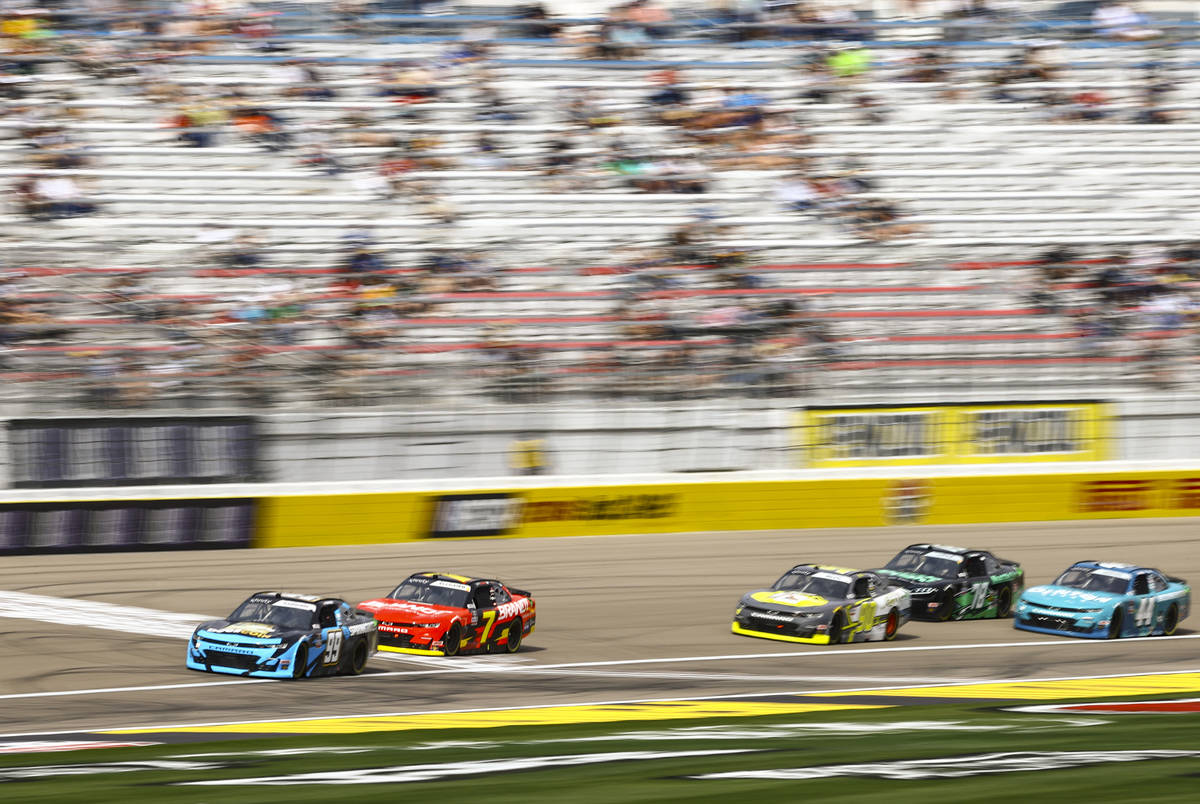 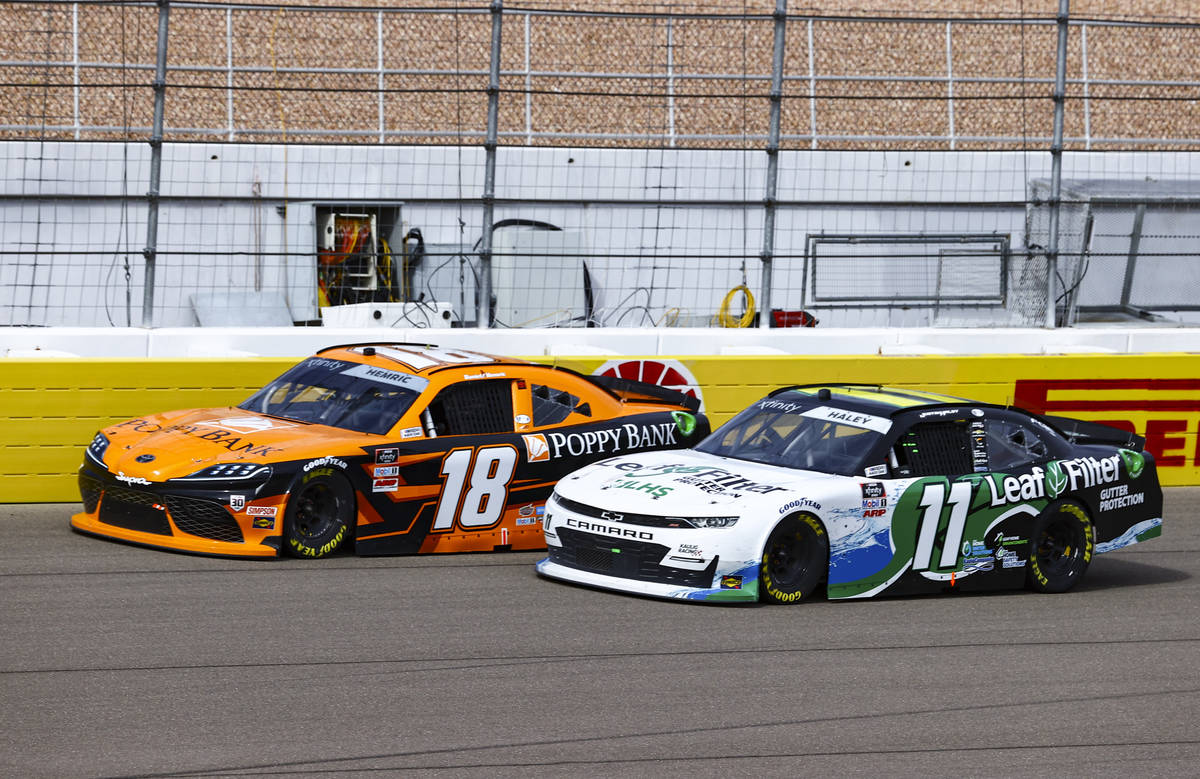 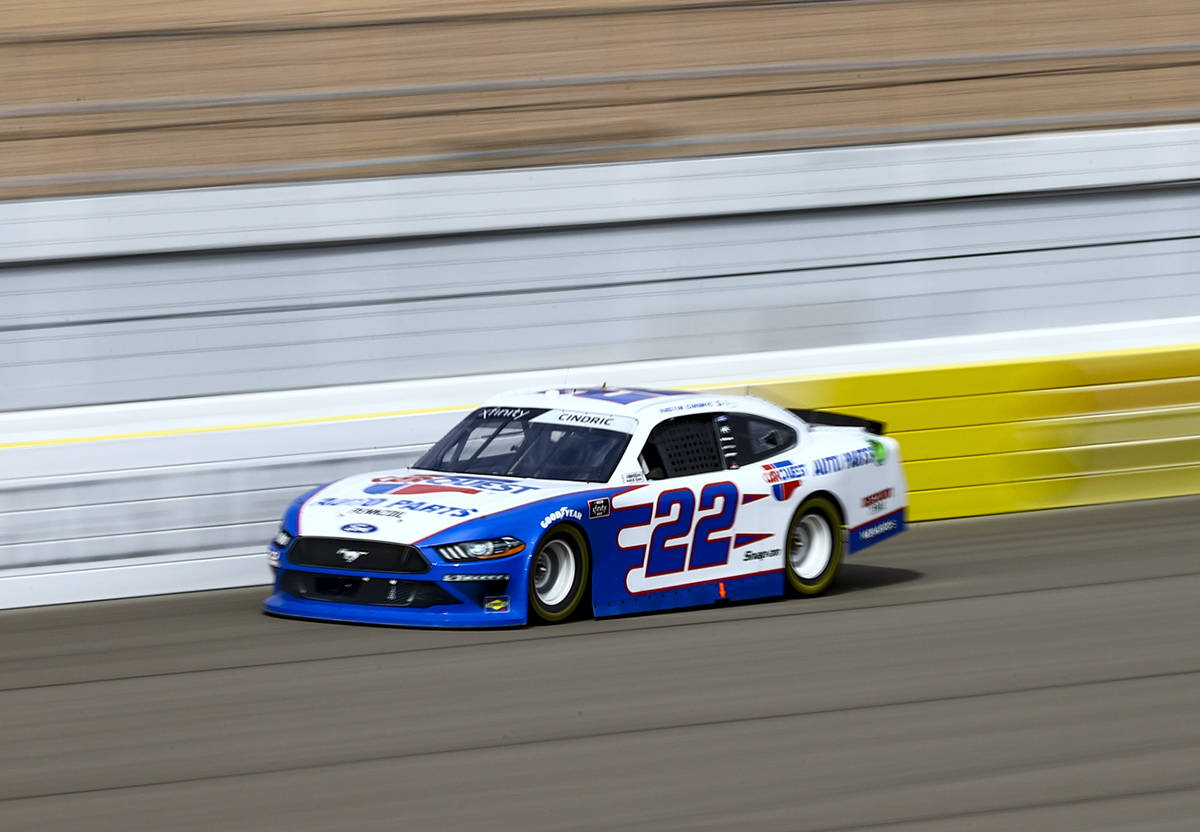 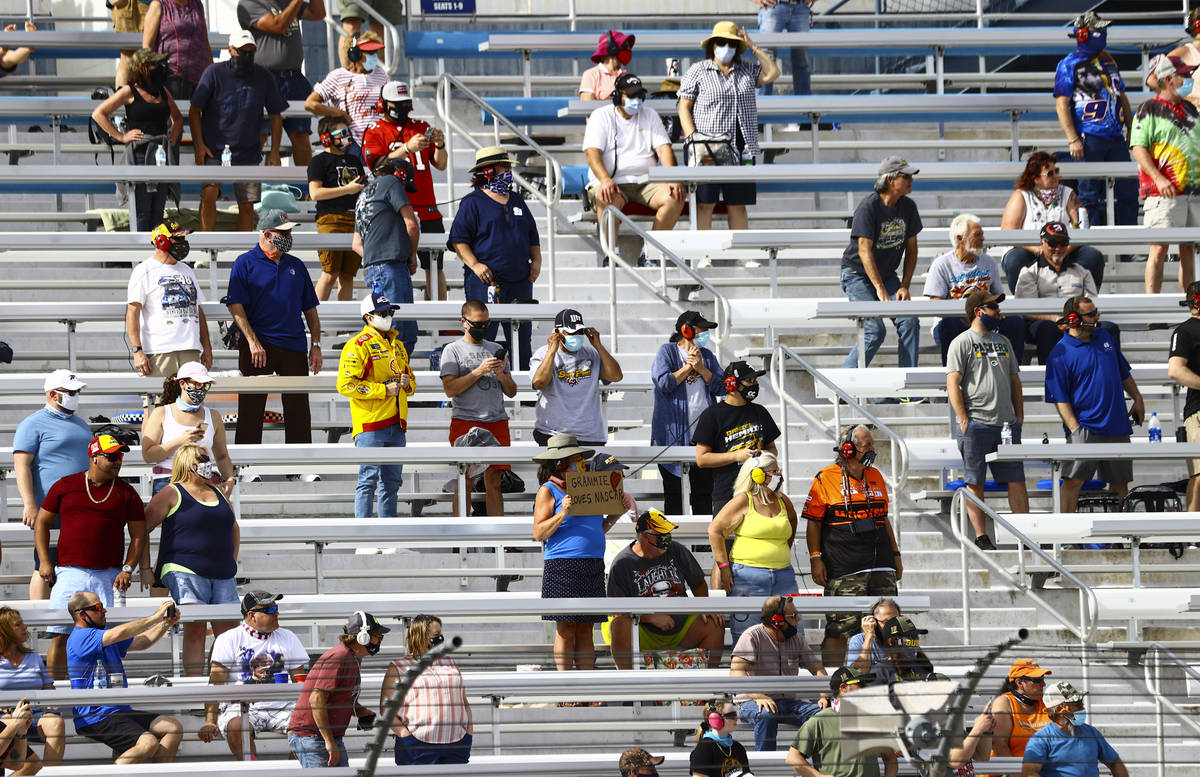 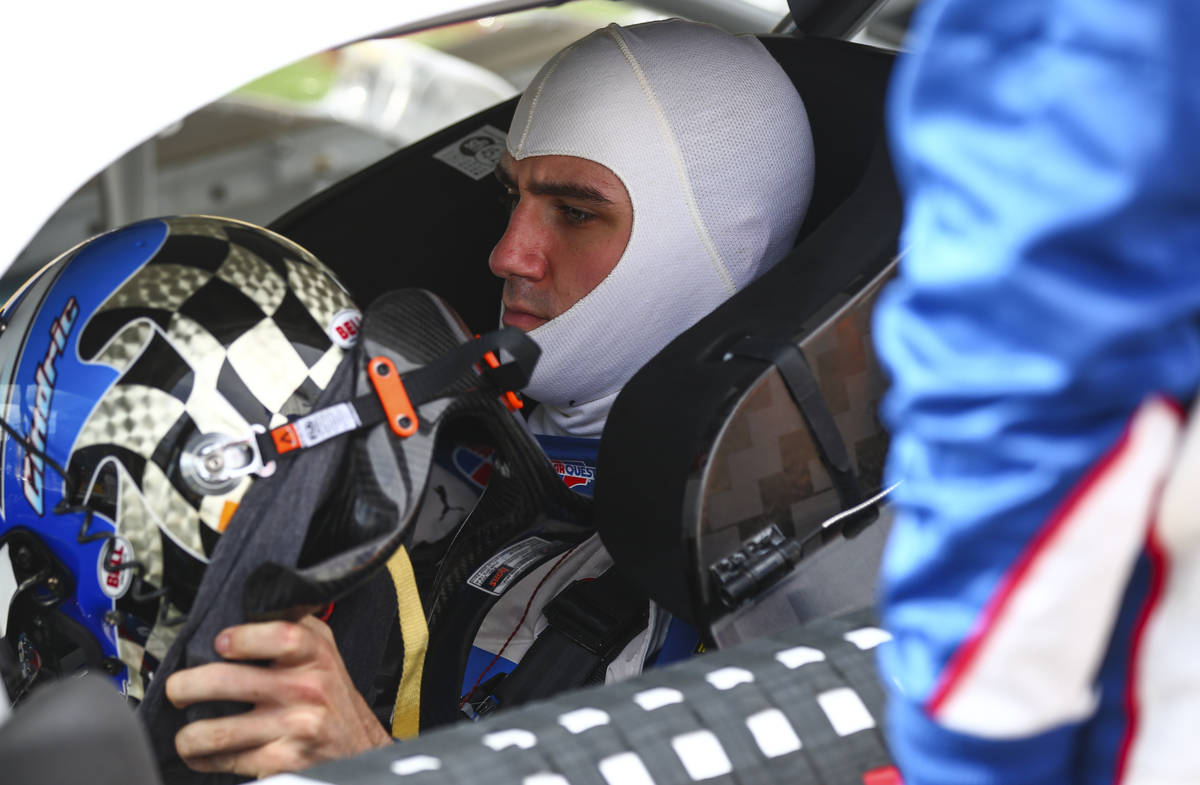 Austin Cindric gets ready to put on his helmet before a NASCAR Xfinity Series auto race at the Las Vegas Motor Speedway on Saturday, March 6, 2021. (Chase Stevens/Las Vegas Review-Journal) @csstevensphoto 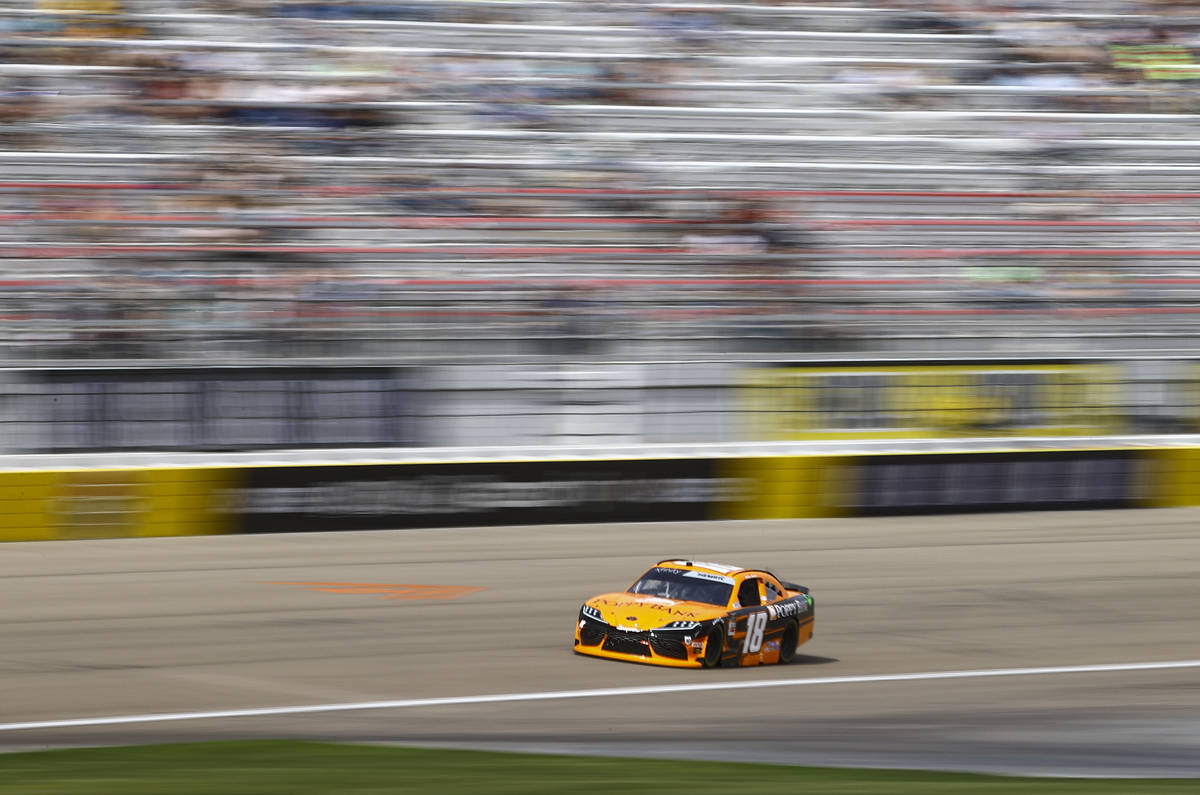 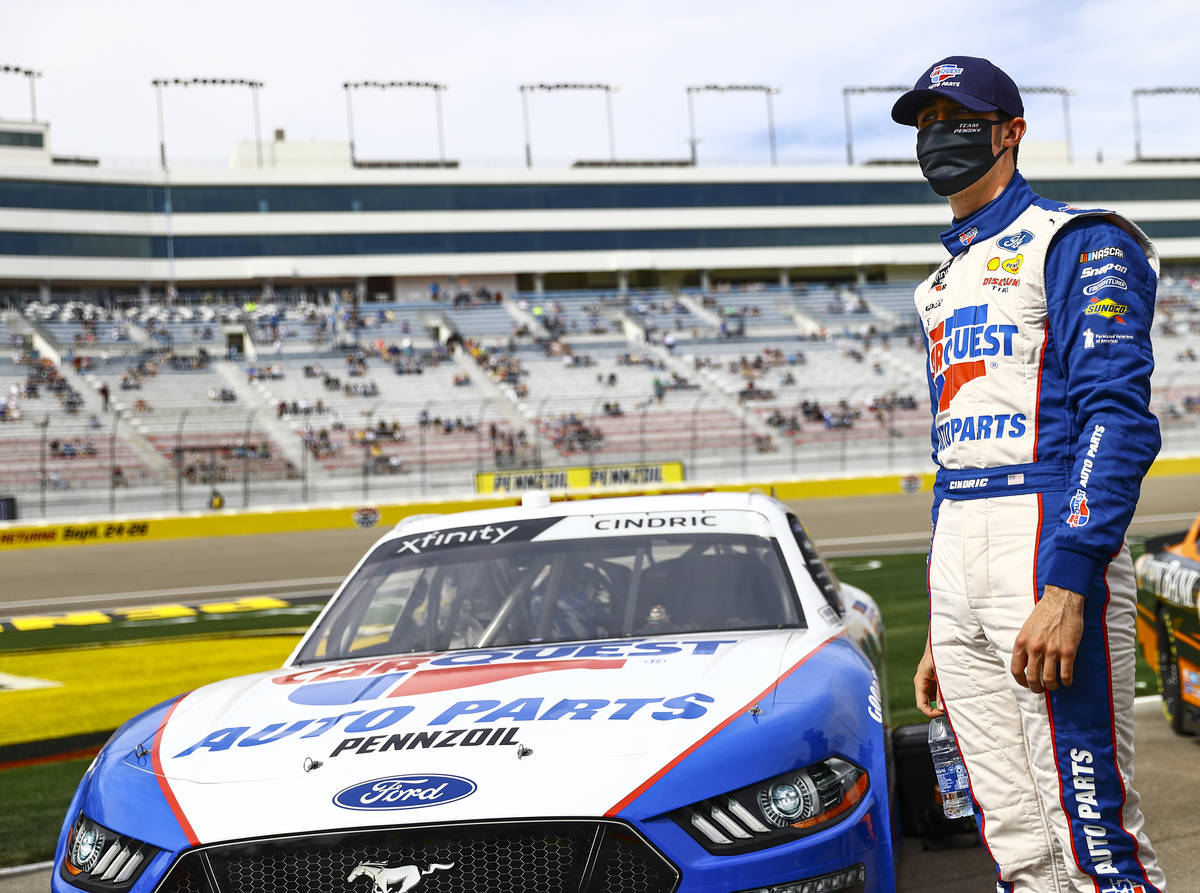 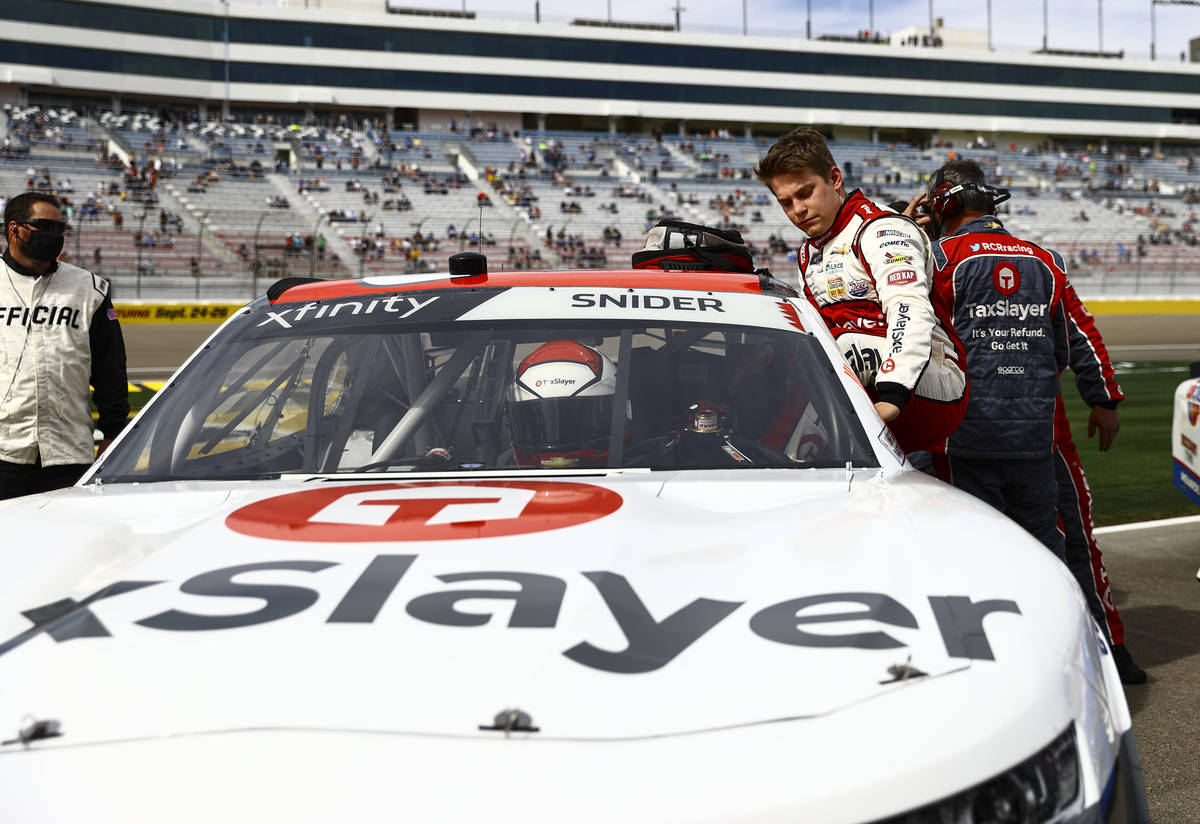 Myatt Snider gets into his car before competing in a NASCAR Xfinity Series auto race at the Las Vegas Motor Speedway on Saturday, March 6, 2021. (Chase Stevens/Las Vegas Review-Journal) @csstevensphoto 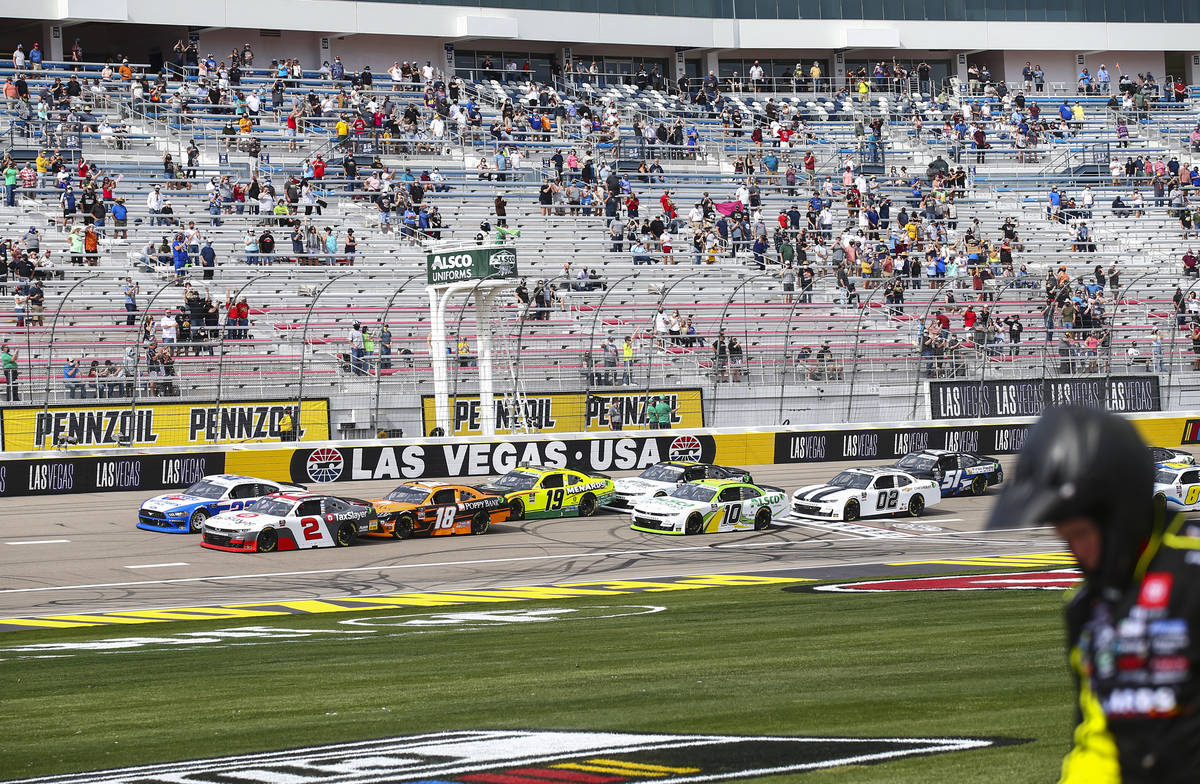 The green flag is waved at the start of a NASCAR Xfinity Series auto race at the Las Vegas Motor Speedway on Saturday, March 6, 2021. (Chase Stevens/Las Vegas Review-Journal) @csstevensphoto

It didn’t take long for AJ Allmendinger to figure out how to go ‘round in circles on a NASCAR oval.

The former Roger Penske Indy-Car driver previously known as a road course specialist on Saturday won his second race in as many seasons on an oval track. Allmendinger assumed control of the Alsco Uniforms 300 Xfinity Series race on the last restart with 13 laps to go and pulled away from second-place finisher Daniel Hemric en route to a satisfying win at Las Vegas Motor Speedway.

“It’s emotional because you never know when you’re going to get to do this again,” said the former IndyCar and sports car veteran who at age 39 has signed for a full-time Xfinity ride with car owner Matt Kaulig. “I want to win so bad for Matt every week. In a different way, but it’s the same theory as wanting to win for Roger Penske.”

Hemric, who led a race-high 74 laps, was a sitting duck coming to the line for the last restart after choosing the outside lane. He crossed the finish line almost a full second behind Allmendinger in a race that was slowed by eight yellow flags.

Las Vegas’ Noah Gragson started 34th, cracked the top 10 within 15 laps and pretty much stayed there until inching his way to fifth place at the finish behind Brandon Jones and Austin Cindric, who ran third and fourth.

The other Las Vegan in Saturday’s race was running 11th early in stage two when Ty Dillon lost control in turns 1 and 2 and spun, collecting Herbst. The No. 98 South Point Ford had to be towed back to the garage area with significant damage, ending Herbst’s day.

“I just wanted to have a good race … and it’s a shame,” said the 22-year-old who has shown bursts of speed in the first four races of 2021 but has yet to post a top 1o with finishes of 26th, 39th, 11th and 40th (last place) on Saturday. “I just can’t get through a race without someone wrecking in front of me.”

While it remains to be seen who will drive into victory circle at the conclusion of Sunday’s Pennzoil 400, the odds are he will be a former Cup Series champion — or go on to become one.

Of the past 15 race LVMS winners, only one — Carl Edwards — has not been a Cup champion. Edwards finished second twice, in 2008 and 2011, the same year he won in Las Vegas.