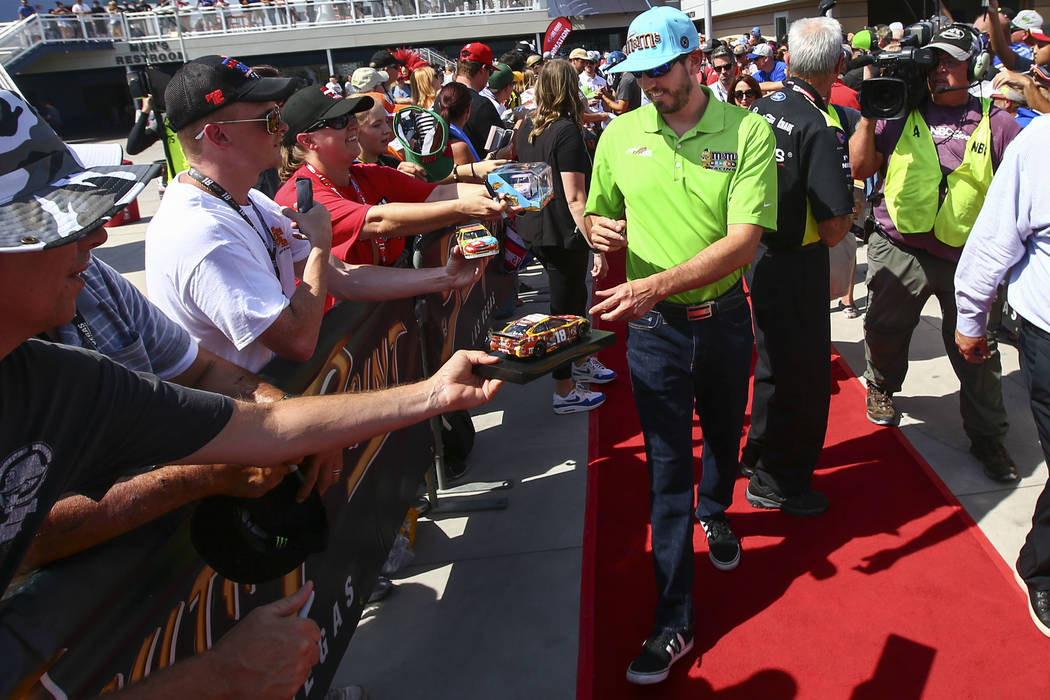 Kyle Busch was hoping he wouldn’t have to use the bonus points he carried over into the NASCAR playoffs after dominating the regular season until a much later date, if at all. An insurance policy, he called them during media day before the South Point 400.

But just 11 laps into the postseason opener on his hometown track, it appeared the championship favorite from Las Vegas might need to call the good hands people right away. He brushed the wall on the backstretch and finished a lap down in 19th place after getting together with a lapped car late in the race that left him in an ornery mood.

During a terse interview he gave one-word answers and quoted ex-NFL star Marshawn Lynch, with whom he spent time before the race.

“Just here so I don’t get fined,” Busch said before asking a NASCAR official “How long do I have to answer these dumb (expletive) questions.”

Brother Kurt also smacked the wall after a restart scrum during the third race stage while running in the top 10 and was the first car behind the wall. Having only modest bonus on which to fall back, the flat tire and crash leaves him little room for error during the next two races before the playoff field is trimmed from 16 to 12.

“We were trying to go four-wide and got a fender rub and now we’re done,” said the older Busch, who saw his winless streak at LVMS stretch to 20 races.

"It's pathetic to have to lean on insurance. My premiums are going to go up." — @KyleBusch#NASCARPlayoffs pic.twitter.com/d3EAfJbV13

Former All-Pro running back and honorary South Point 400 pace car driver Marshawn Lynch may have reinvented “Beast Mode” when he strolled into the media center on a 100-degree day wearing all black and long sleeves and a combination black balaclava/hoodie thing.

He did not exchange witty banter and repartee with the NASCAR media, but he did make his way to where the race car haulers were and traded helmets with Las Vegas leadfoot Kyle Busch.

One Beast to another — Marshawn Lynch asks @KyleBusch about his #SouthPoint400 setup @LVMotorSpeedway. #NASCARPlayoffs pic.twitter.com/ijaJktFU9R

South Point 400 grand marshal Cole Hauser, who plays Rip Wheeler in the popular Paramount cable TV series “Yellowstone” was more engaging. Given his character’s name would make the perfect moniker for a NASCAR driver, he was asked about a role in a “Days of Thunder” sequel should it ever get the green light.

“Only if (Robert) Duvall is in it,” Hauser said of the iconic actor who played crew chief Harry Hogge in the original starring Tom Cruise.

Cole Hauser, who plays Rip Wheeler — is that a great #NASCAR name or what? — on TV show "Yellowstone" chats with Emily Ouimette of the @LVMotorSpeedway media team before the #southpoint400. Hauser will give command to start engines. Let 'er Rip! #NASCARPlayoffs pic.twitter.com/zivCKQI0JT

“Total respect for what these guys do,” Stone said about what it was like when Burton accelerated like a young Sergei Federov in open ice. “Can’t imagine going 400 miles like that.”