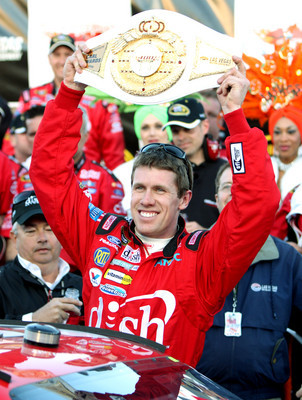 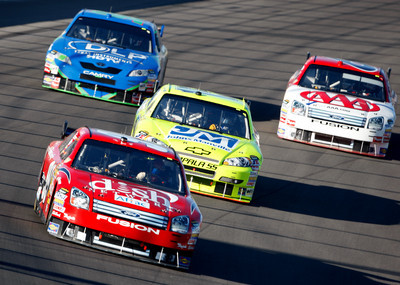 Jack Roush is showing there’s no better way to make up for lost time than winning.

He admittedly was slow to begin testing the new model NASCAR Sprint Cup car when it was introduced last year with a partial schedule and made its debut Sunday at Las Vegas Motor Speedway.

But four drivers — especially Carl Edwards — are showing they’ve raced their way through the learning curve.

Edwards gave Roush Fenway Racing its second consecutive Cup victory in a week when he held off Dale Earnhardt Jr. in a two-lap shootout to win the UAW-Dodge 400 and $425,675 for his team before an estimated crowd of 150,000.

"It’s really cool to come off Turn 4 and see all those fans standing up and know you’ve got the best drivers in the world behind you," said Edwards, who led a race-best 86 laps, including the last 30. "When it’s on the line with two laps to go, I like it."

But he must not have liked having his No. 99 Ford pushed into a NASCAR transporter after post-race inspection.

Officials determined the cover for the oil tank located behind his seat wasn’t attached. The car was confiscated for further evaluation at the NASCAR research and development center near Charlotte, N.C.

NASCAR never takes a win away from a team, so this makes two straight for Edwards, including his victory last Monday in the rain-delayed event in Fontana, Calif.

Edwards and the team could be fined or docked points early this week by NASCAR after the investigation is completed. A Ford spokesman said crew chief Bob Osborne will not comment until NASCAR reveals its findings.

Edwards didn’t need more drama. He had enough in the race.

He had to overcome a pit-road penalty after 50 laps when a tired rolled away and he dropped from fifth to 23rd. Then on lap 215, another tire rolled away. His team avoided another penalty when officials reviewed an instant replay and determined a cameraman impeded a crewman from getting to the tire.

Edwards held a 2.8-second lead over Earnhardt when Kurt Busch crashed on lap 258 while running 15th. Busch became the fourth victim of a blown right-front tire.

When racing resumed, it didn’t take long for Edwards to get another seemingly safe lead after Earnhardt spun his tires as the green flag waved to restart the race.

But with four laps left, an event-record 11th caution came out after a crash demolished Jeff Gordon’s car on the backstretch.

When Earnhardt lost traction, Gordon went to his left, and Matt Kenseth went to the right. They raced three abreast through the first and second turns before Earnhardt fell to fourth and moments before Gordon nipped the left-rear of Kenseth’s car.

Kenseth spun, and Gordon ran head-on into an abutment at an opening along the inside guardwall. The impact sent his radiator flying onto the track.

"It was a little bit my fault," said Gordon, who was sore but uninjured. "I didn’t want to be on the inside there. My car was really too tight (hard to turn). I drifted up into Matt and hated that that happened."

That brought out a red-flag stoppage for 17 minutes, 57 seconds.

"Yeah, I was real worried," Edwards said of the restarts, especially the last one.

Earnhardt, driving the No. 88 Chevrolet for his new Hendrick Motorsports team, knew he had made a mistake but acknowledged that only an error by the faster Edwards would give him a chance to win.

"I’ve been out of the game so long," he joked of not being able to challenge for wins driving less competitive cars the past few years for Dale Earnhardt Inc., where his finished 16th in points last year. "I ain’t had a whole lot of practice out there. I looked like a tool out there."

Edwards wasn’t counting on him making another mistake.

"If it wasn’t enough, (Osborne) and Jason Hedlesky, my spotter, reminded me how good (Earnhardt) was on restarts all day. So that didn’t help," said Edwards, who took the season points lead away from Las Vegas native Kyle Busch.

Busch, who was replaced at Hendrick by Earnhardt, was trying to become the first pole winner at the track to win. He finished 11th.

Earnhardt provided the only bright spot for Hendrick, which saw its three-year win streak by Jimmie Johnson end as he struggled to finish two laps down in 29th place.

Roush’s Greg Biffle, who finished third, said it was "uncharacteristic of Jeff to overdrive or make a mistake like that."

"The red flag just really killed us," said Earnhardt, who hasn’t won in his last 64 points races. "We were terrible on cold tires. It’s real frustrating."

"Winning these races is the greatest part of this whole thing," he said.