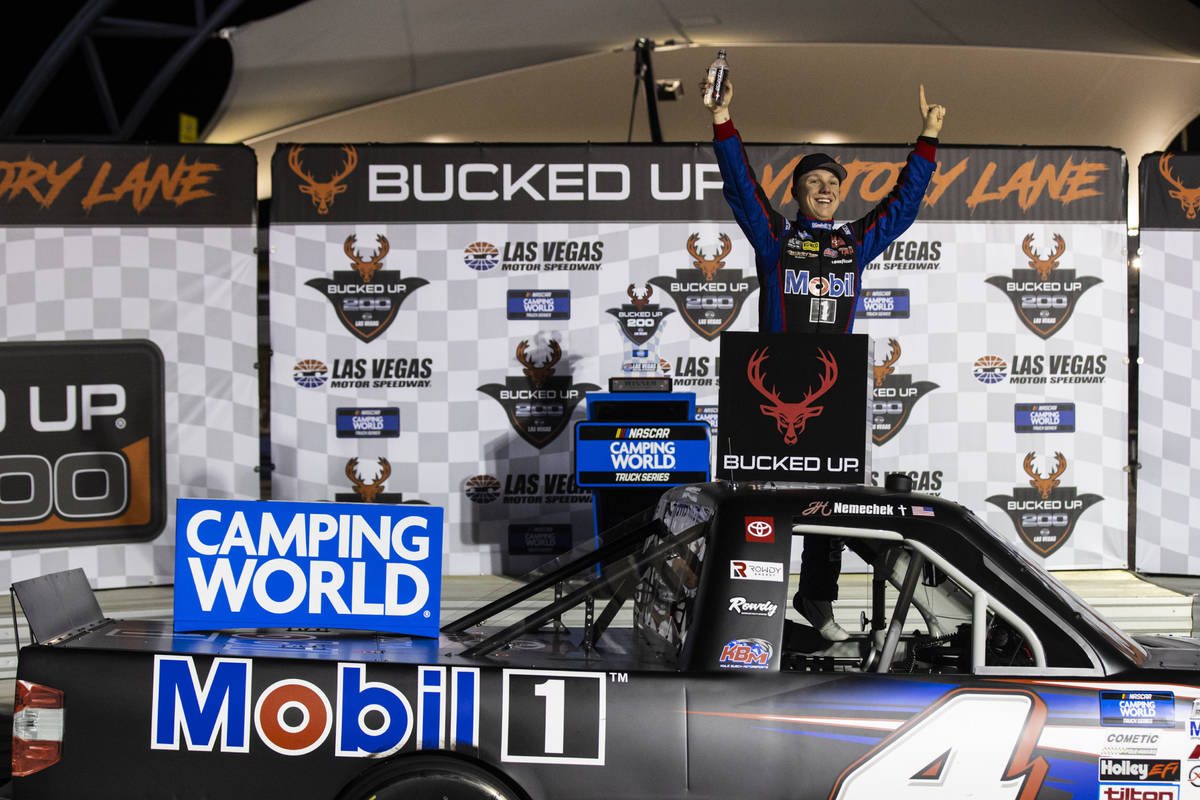 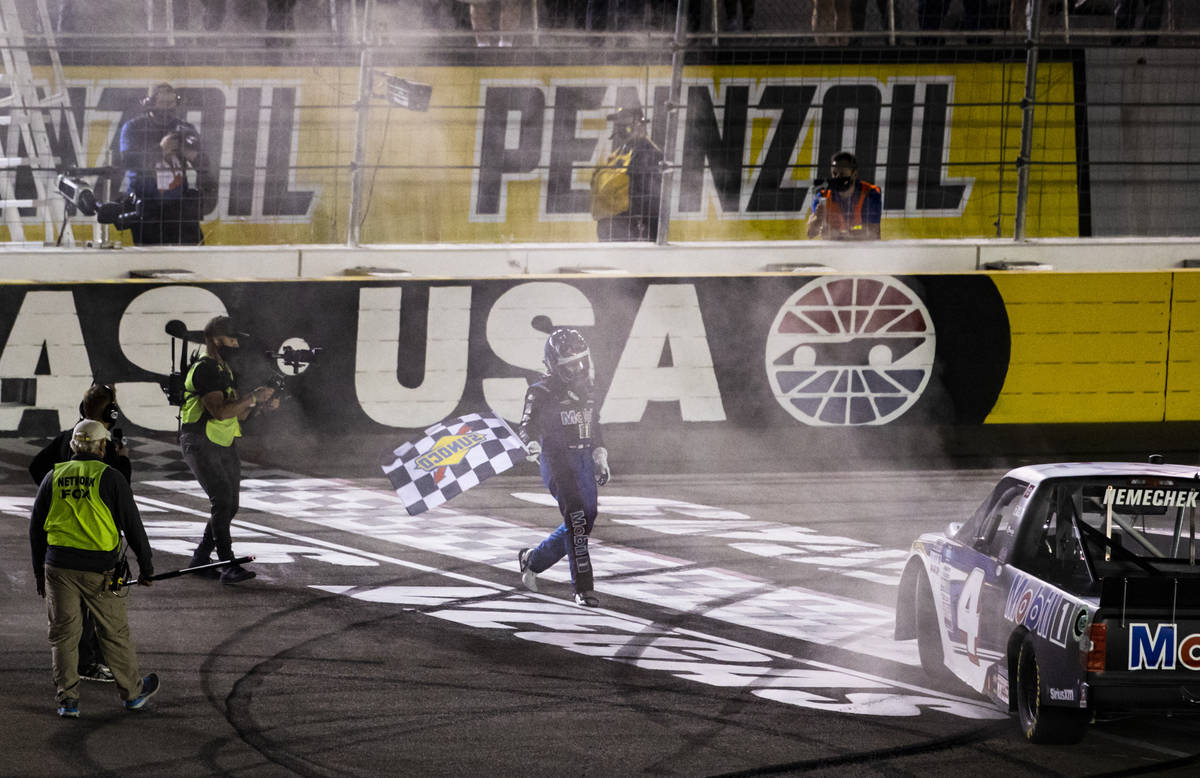 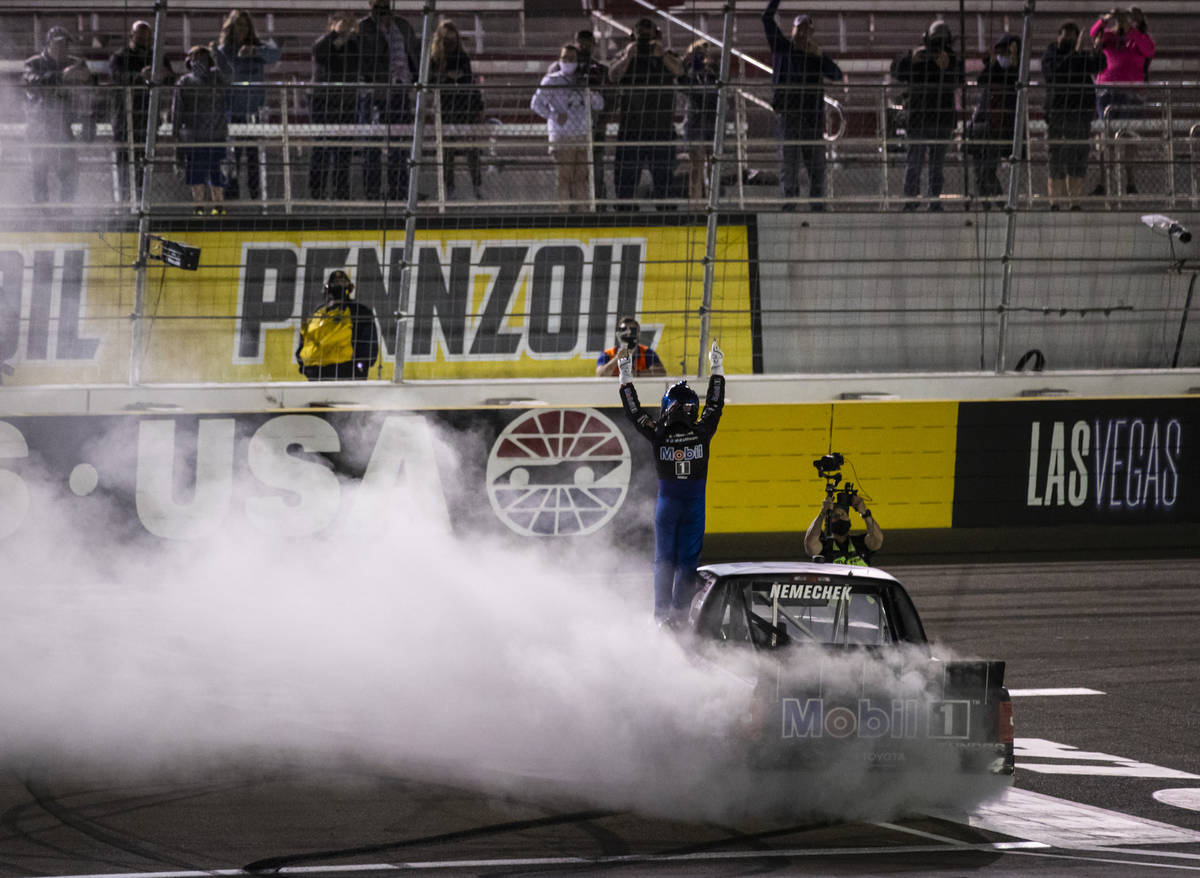 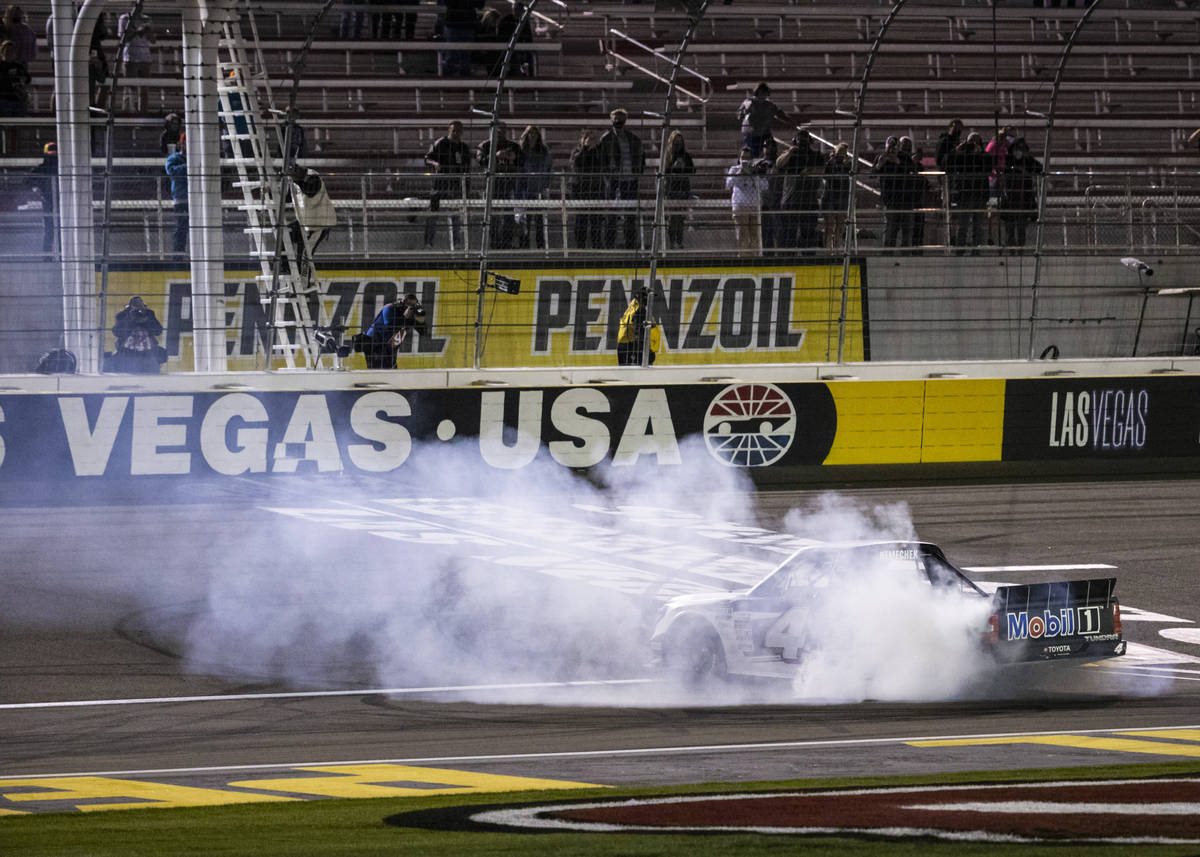 He’s still the boss of the NASCAR Truck Series team he owns. But for one night, Kyle Busch seemed willing to bestow the title of honorary leader on a youthful protege.

John Hunter Nemechek flashed across the finish line .686 seconds ahead of his team owner to win the Bucked Up 200 in front of a crowd estimated at 12,500 Friday as NASCAR fans returned to Las Vegas Motor Speedway for the first time since the advent of the pandemic.

“It’s perfect. It’s cool to see the 4 truck in victory lane. It’s cool to see John Hunter have a shot to get back to victory lane,” Busch said after the 23-year-old became part of the first father-son tandem to become NASCAR winners at LVMS. His father, Joe, won the 2003 Xfinity Series race at the 1.5-mile oval.

It was Busch who gently tapped Nemechek forward following a late restart that enabled the latter to drive away. It also ended a furious charge by the Las Vegas native who won the second race stage before falling to 30th place and a lap down after cutting a tire and spinning with 44 laps remaining.

“We came into this year with the hashtag ‘we’re here for wins,’ so I definitely think the experience paid off tonight,” said Nemechek, who drove in the Cup Series last year and lead a race-high 94 laps Friday.

The third race stage was marred by several crashes, including a serious-appearing one involving Conor Daly, a regular in the IndyCar series who was making his second start in the trucks, both at LVMS. Daly was running in a pack when his truck got loose in traffic, slammed the wall in Turn 1 and burst into flames. He got out of the truck with an assist from the track safety crew.

The starting grid for the Truck Series race was like a superhero movie where there are multiple Supermen, Batmen or Spidermen, and it’s hard to tell them apart.

There were no fewer than 10 trucks sporting variations of the Camping World livery after Marcus Lemonis, CEO of the series’ title sponsor, offered $15,000 sponsorships to any truck willing to fly the company’s blue and yellow colors. As an added incentive, Lemonis agreed to pay an additional $25,000 for any Camping World truck finishing in the top 10 and $50,000 for a victory.

While the gesture was much appreciated, it also called attention to a flagging bottom line as the Truck Series struggles to remain solvent amid the pandemic.

There’s a charming Instagram video making the rounds that shows Kyle Busch and his 5-year-old son, Brexton, discussing a photo in which dad’s car appears to be careening out of control during the 2012 Clash at Daytona.

“Do you think I’m crashing ?” Pops asks his little guy. “I saved it. And then guess what happened — I won.”

“How did you save it?” Brexton asks in wonderment.

“Because I’m a bad-ass,” Dad says, elicting a hearty chuckle from his little boy.