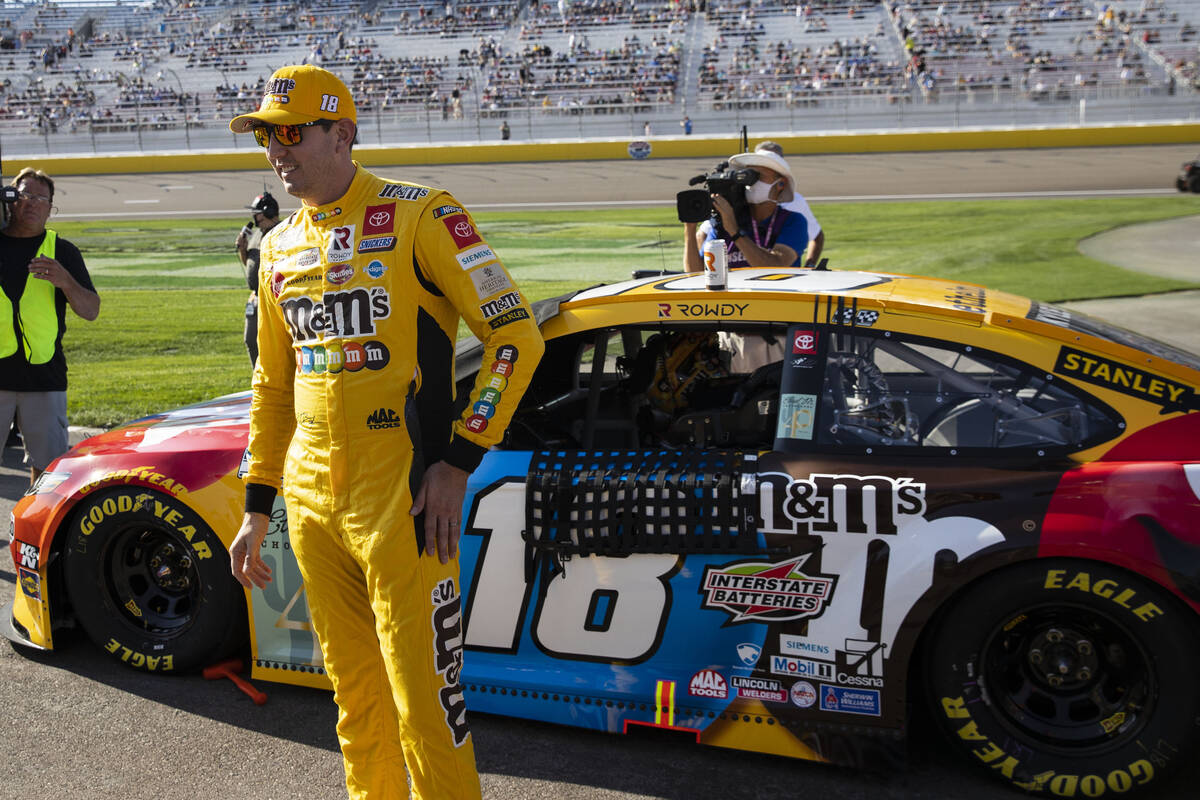 Kyle Busch (18) stands next to his car prior to the start of the 4th Annual South Point 400 race at Las Vegas Motor Speedway, on Sunday, Sep. 26, 2021, in Las Vegas. (Bizuayehu Tesfaye/Las Vegas Review-Journal) @bizutesfaye 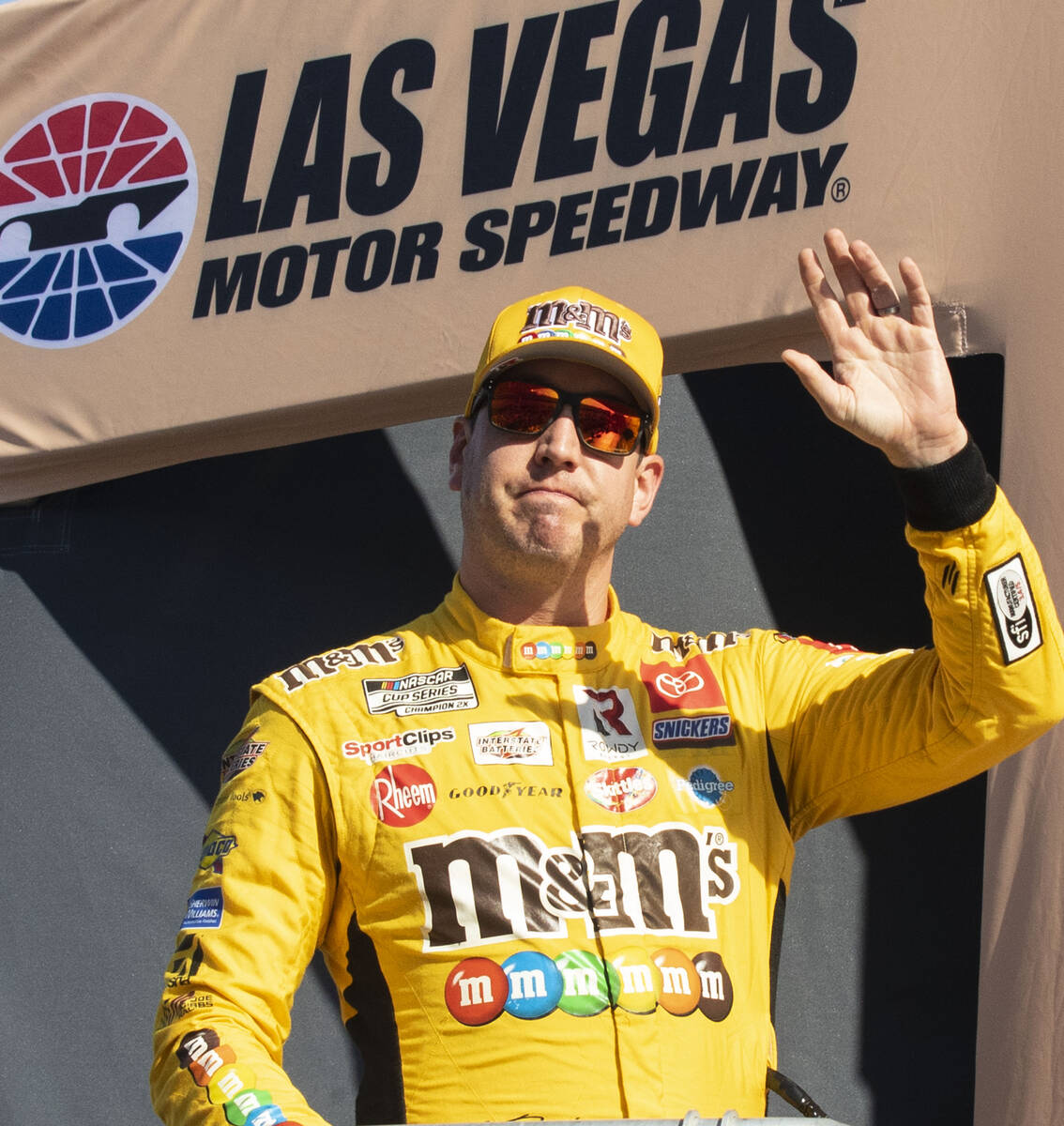 Kyle Busch (18) waves to the crowed as he was introduced during the 4th Annual South Point 400 race at Las Vegas Motor Speedway, on Sunday, Sep. 26, 2021, in Las Vegas. (Bizuayehu Tesfaye/Las Vegas Review-Journal) @bizutesfaye 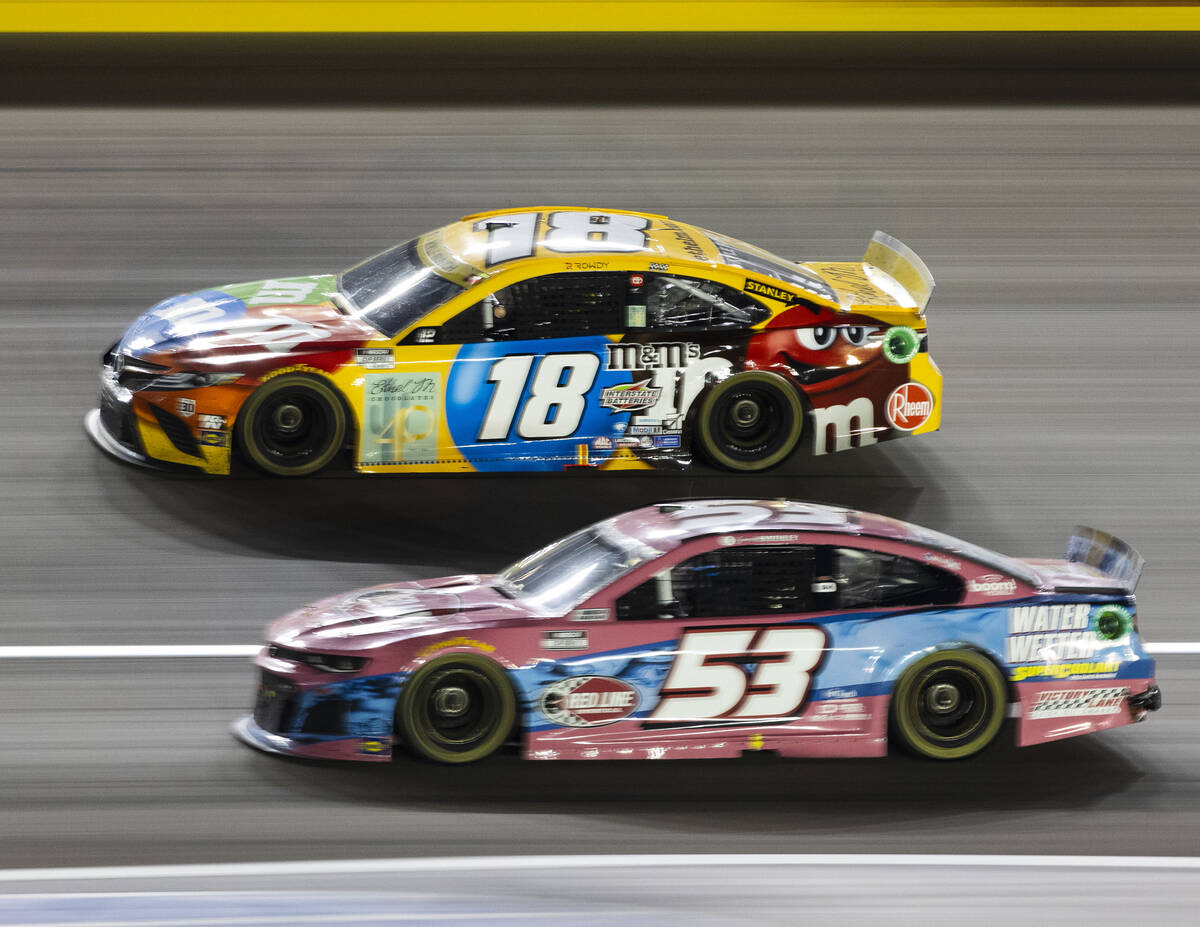 Kyle Busch got what he came for at Sunday’s South Point 400 at Las Vegas Motor Speedway.

But it would have been nicer to get a little bit more, the Las Vegas driver said after finishing third on his hometown track.

“Certainly wish we could have gotten a win, obviously, to not worry about the next two races. But it wasn’t meant to be,” said the driver of the No. 18 Joe Gibbs Racing Toyota who was bidding for his first victory at LVMS since 2009.

A win also would have resulted in an automatic berth to the third round of the playoffs, with unpredictable races at Talladega and the Charlotte “roval” coming up in the Round of 12 before the playoff field is trimmed. Busch thought he had a shot, until the sun dipped below the rim of the grandstands and cooled the track.

But the third-place finish bumped him to third in the playoff standings, 22 points behind leader Kyle Larson.

“Felt like we had a better car when the sun was out,” Busch said. “But that was about the time, when the lights went on, we got run into the wall twice off of (Turn 2). We didn’t have the same speed after that.”

The two-time series champion was making his milestone 600th Cup Series start, but he said that didn’t make the third-place run any more rewarding.

Older brother Kurt Busch, the defending South Point champion who was eliminated from title contention after the first round of playoffs, was never a serious factor to repeat. But he parlayed effective pit stop strategy and perseverance into an eight-place finish.

Unlike the Truck and Xfinity Series races on Friday and Saturday, each of which produced a multi-vehicle pileup, the Cup Series race had only one yellow flag for contact.

Joey Gase had a tire come off his car and clouted the Turn 2 wall. He walked to the ambulance but was transported to an undisclosed hospital for further evaluation.

— Dana White was grand marshal of this year’s race and gave a fairly routine command to start engines: “What’s up, Las Vegas, are you ready?” roared the UFC president. “Gentlemen, start your engines!”

— LVMS president Chris Powell announced a new program called Speedway Legends Sunday that will honor a NASCAR luminary each year at the South Point 400. Hall of Famer Mark Martin, winner of the inaugural Las Vegas Cup Series race in 1998, will be feted in 2022.