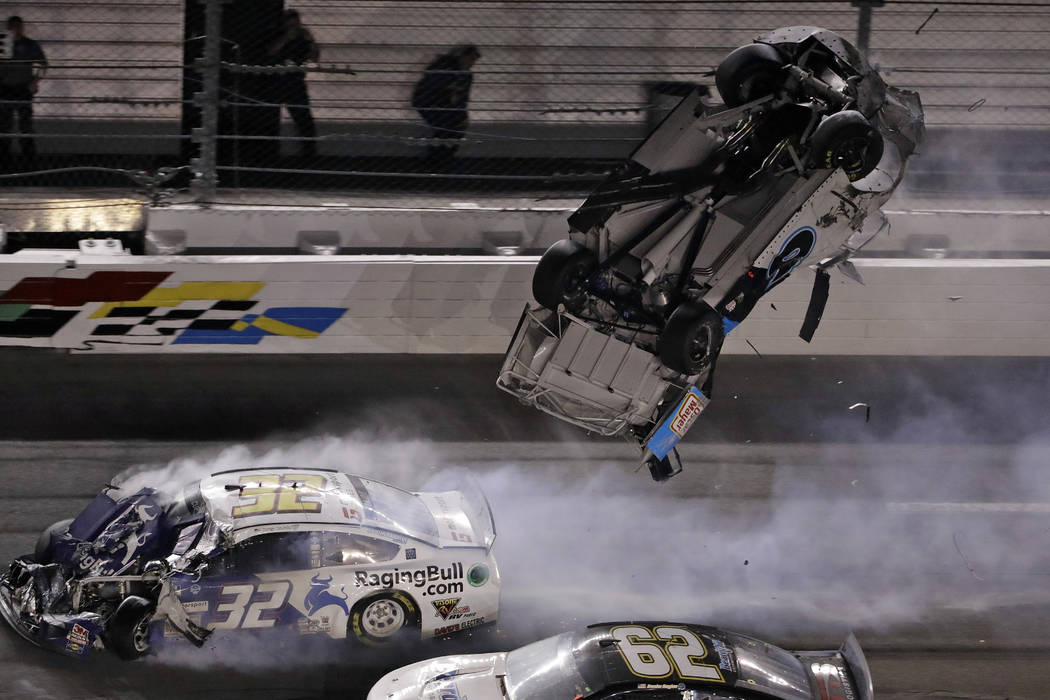 With rain showers canceling qualifying for Sunday’s Pennzoil 400, most of the day’s news was generated in the media center where NASCAR officials addressed Ryan Newman’s terrifying crash on the final lap of Monday’s rain-delayed Daytona for the first time.

Newman remarkably was released from the hospital just two days after the violent wreck in which his car slammed the wall and flipped back onto the track where it was struck in the vulnerable driver cockpit by another car.

Xfinity Series and part-time Cup competitor Ross Chastain will step into the No. 6 Ford at LVMS as Newman has not been cleared to drive.

“The first responders performed their job as trained; the training systems, the safety systems all worked as they were designed,” NASCAR chief racing development officer Steve O’Donnell said. “But again, never satisfied with what took place. We’ll learn as much as possible and implement changes, if there are any, as soon as we can.”

O’Donnell said he was comfortable with the rules for overtime, when many of the big crashes happen, as well as NASCAR’s caution protocol.

“Still early as we look through this, but we’re going to look at anything and everything in terms of the speeds, the liftoff — we never want a car to get airborne,” O’Donnell said. “We’ll look at how that occurred around the speeds; we’ll look at the racing procedures we have as well. All of those will be on the table.”

Martin Truex Jr. suggested the drivers could do a better job of policing themselves in the fraught-filled superspeedway events.

“I feel like sometimes we get out there and guys think it’s a video game — you crash and just hit reset,” said the 2017 NASCAR champion. “We could literally go all day without crashing if everybody said I’m not going to wreck.”

Rain or shine, the storylines remain the same for race day: Team Penske’s dominance at LVMS, with Truex Jr. and Kevin Harvick closing fast in the draft.

Penske drivers Joey Logano and Brad Keselowski have won three of the past six LVMS races, with Logan coming home first in last year’s Pennzoil 400 and Keselowski setting the pace in in 2014, ‘16 and ‘18.

Logano’s average finishing position of 8.5 is tops among the 38 starters. Keselowski finished second behind his teammate in last spring’s race.

Ryan Blaney, the third driver in the Penske stable, also has run well at LVMS with three top five finishes in seven starts.

“Daytona is a unique beast (so) we’re kind of glad to get out of there and start working on our cars in a different way,” Logano said of Sunday’s race that is expected to provide more of a season preview.

Truex Jr. has two LVMS wins and has finished no worse than eighth in his past five Las Vegas starts. Harvick has seven top fives, including a dominating victory in the 2018 spring race in which he led 214 of the 267 laps.

With 2019 owner points setting the starting order, Kyle Busch will roll away first but start in the rear after his Toyota failed tech inspection.

“Yeah, I think I knocked the wall down about lap 11 last time here starting in the middle of the pack,” the two-time NASCAR champion from Las Vegas said about driving to the front. “Maybe I’ll just start half a lap down and be in clean air and blow by them one at a time.”