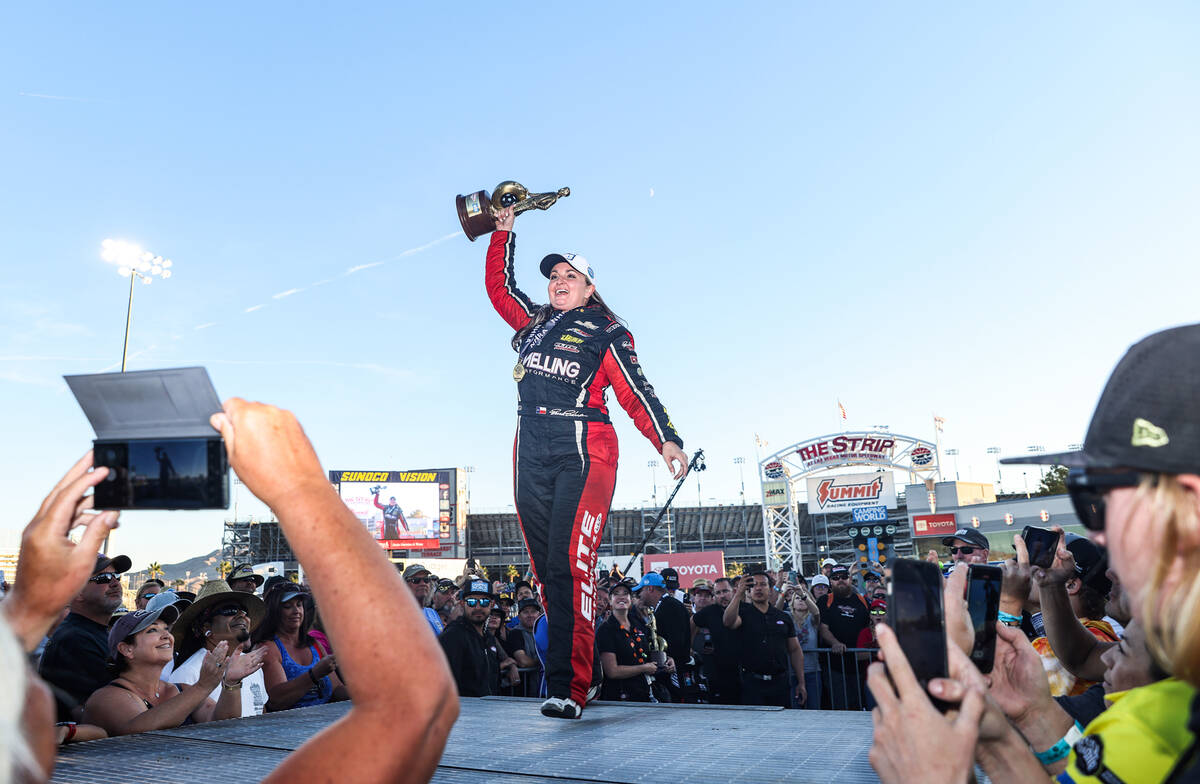 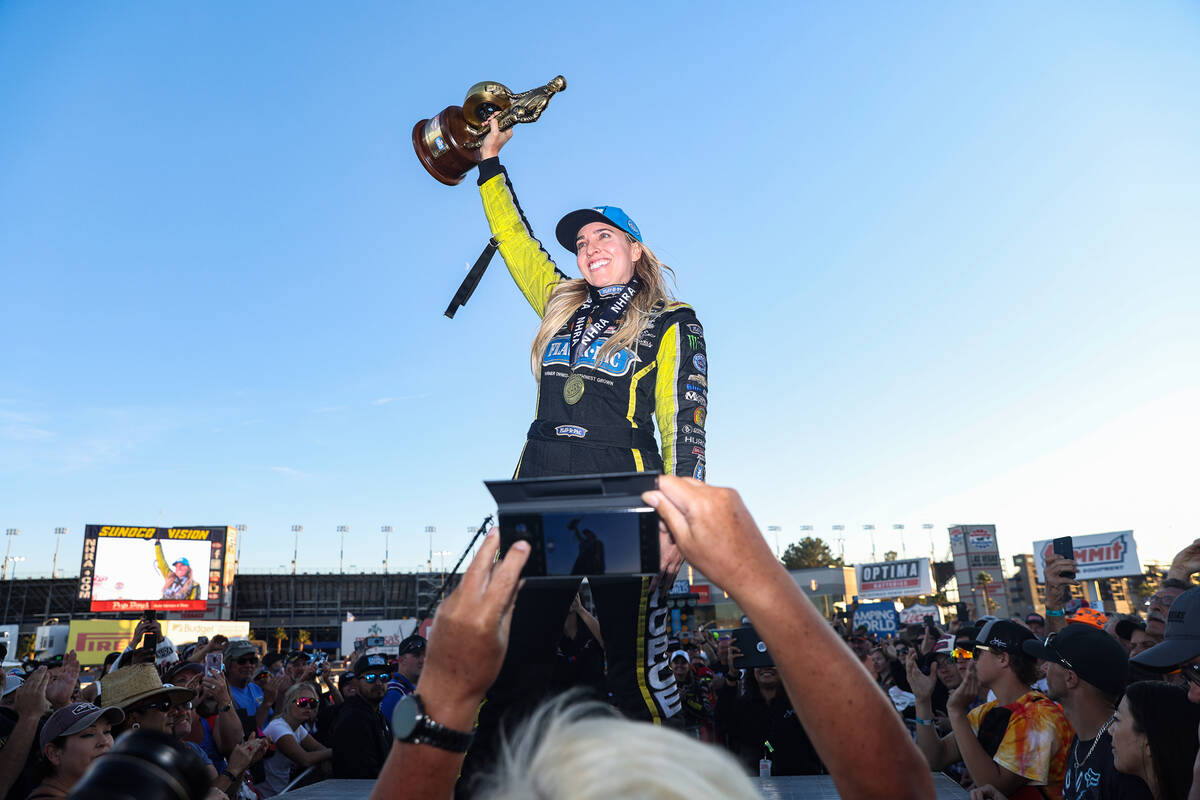 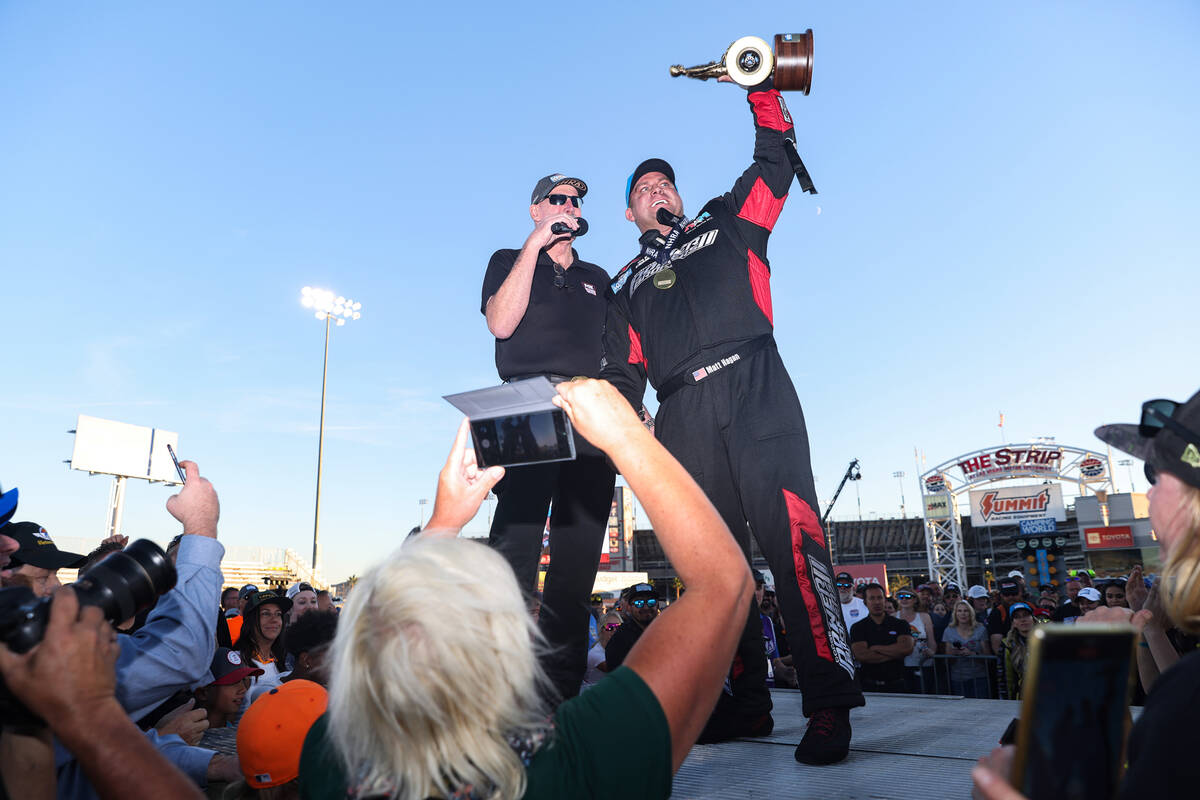 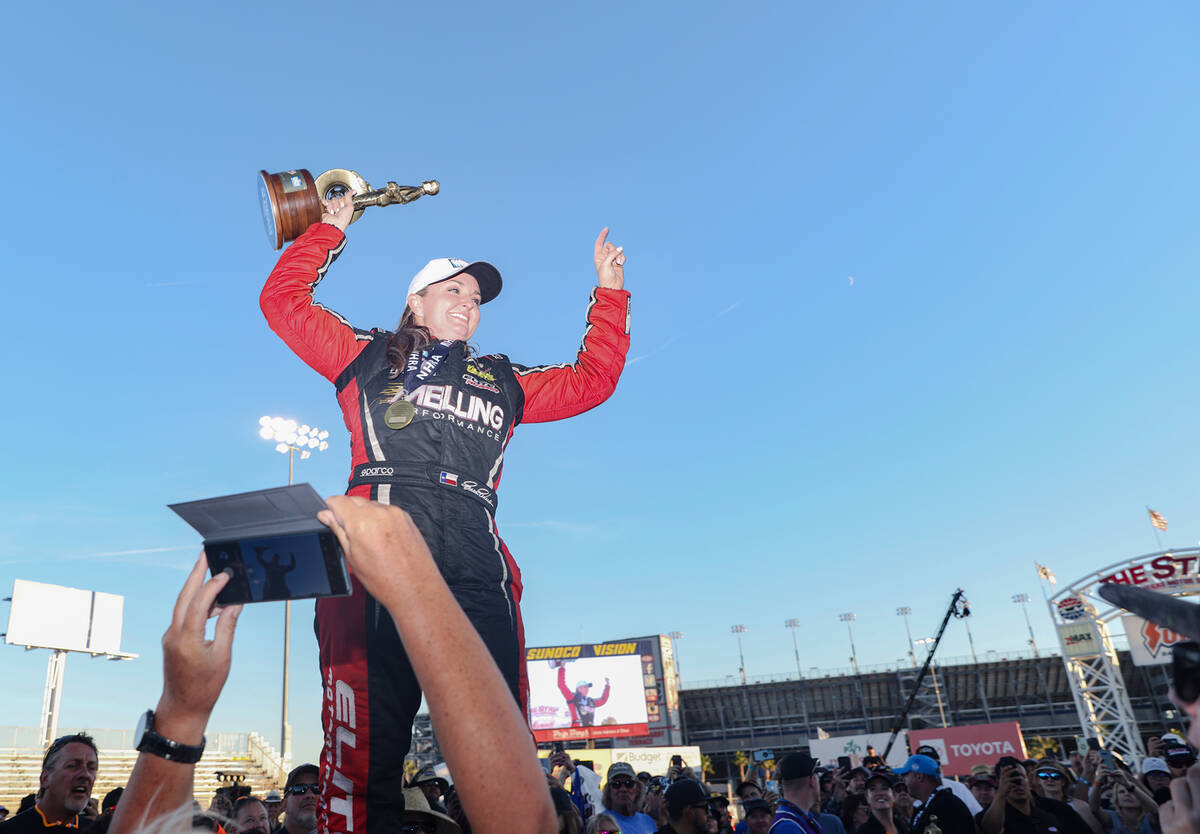 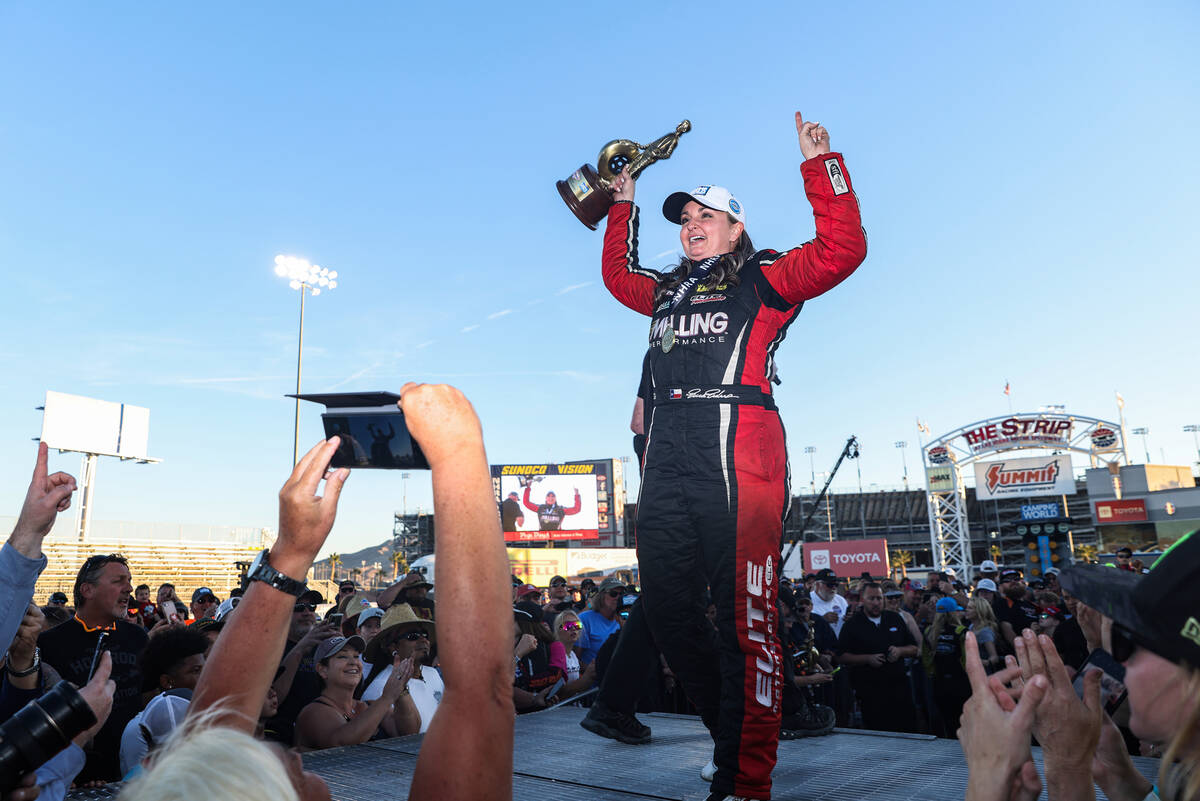 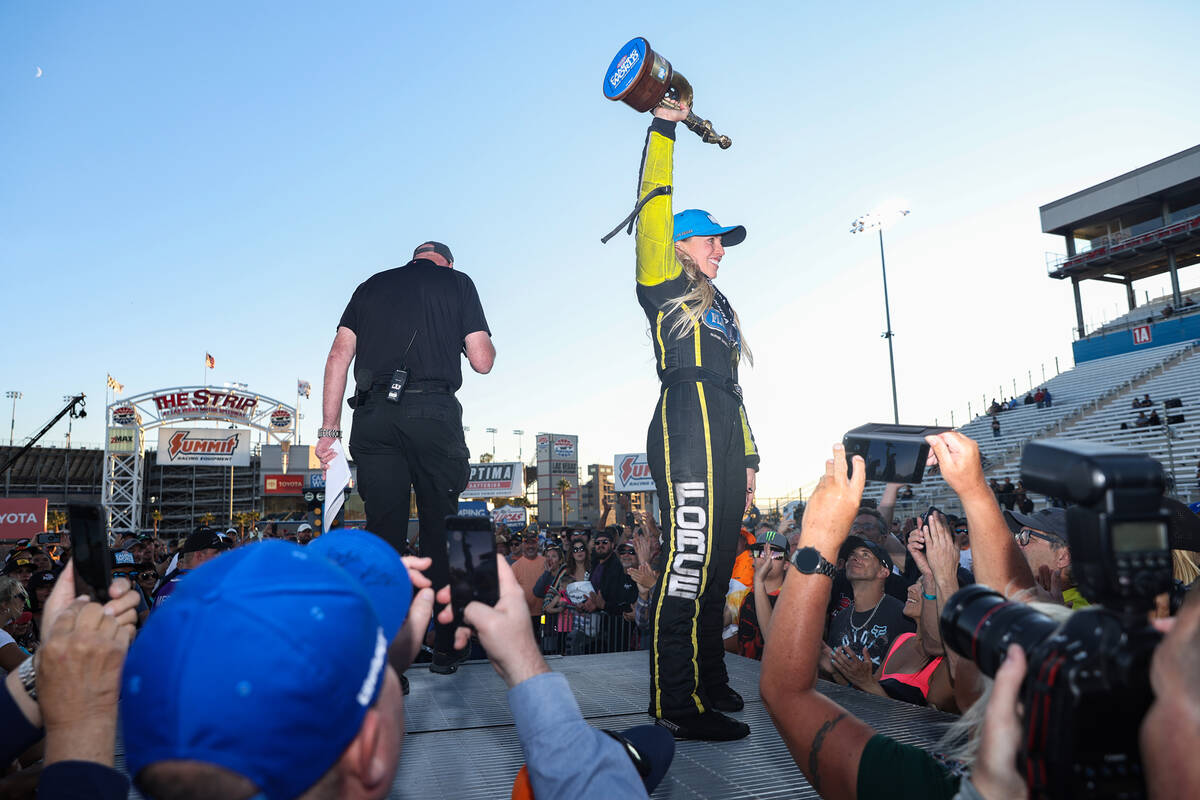 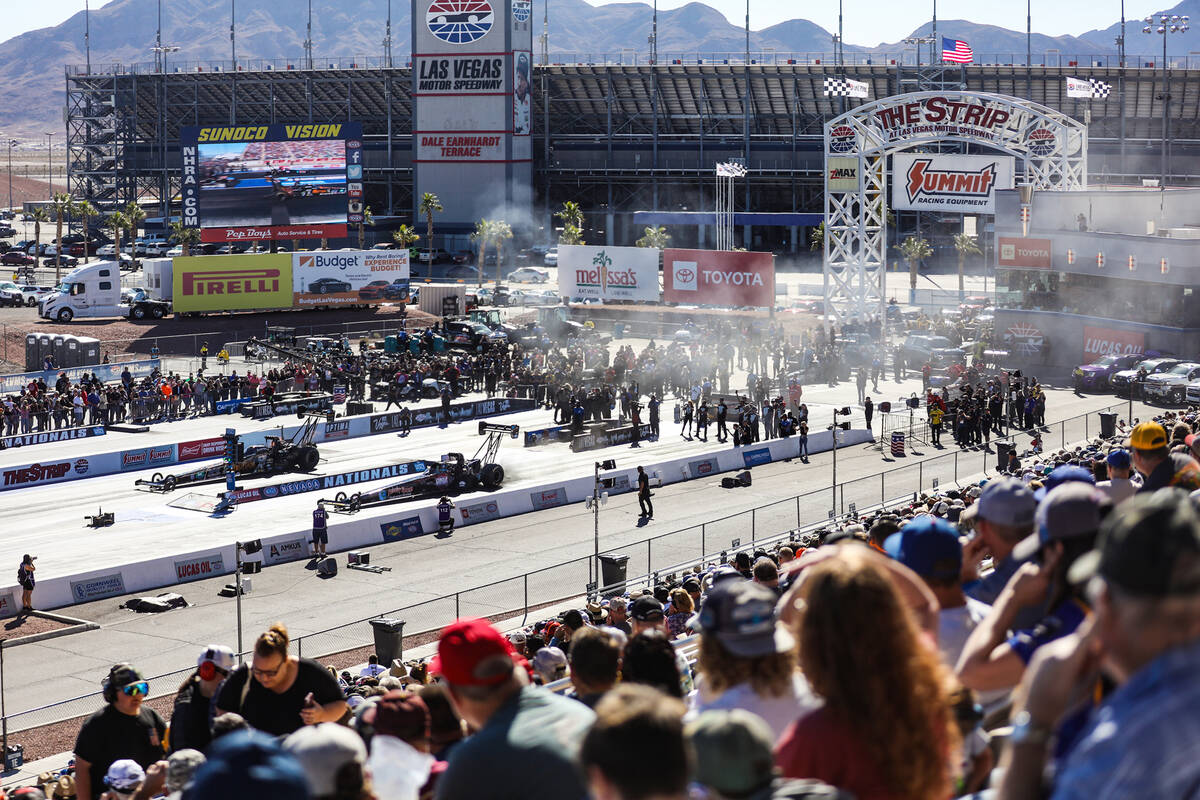 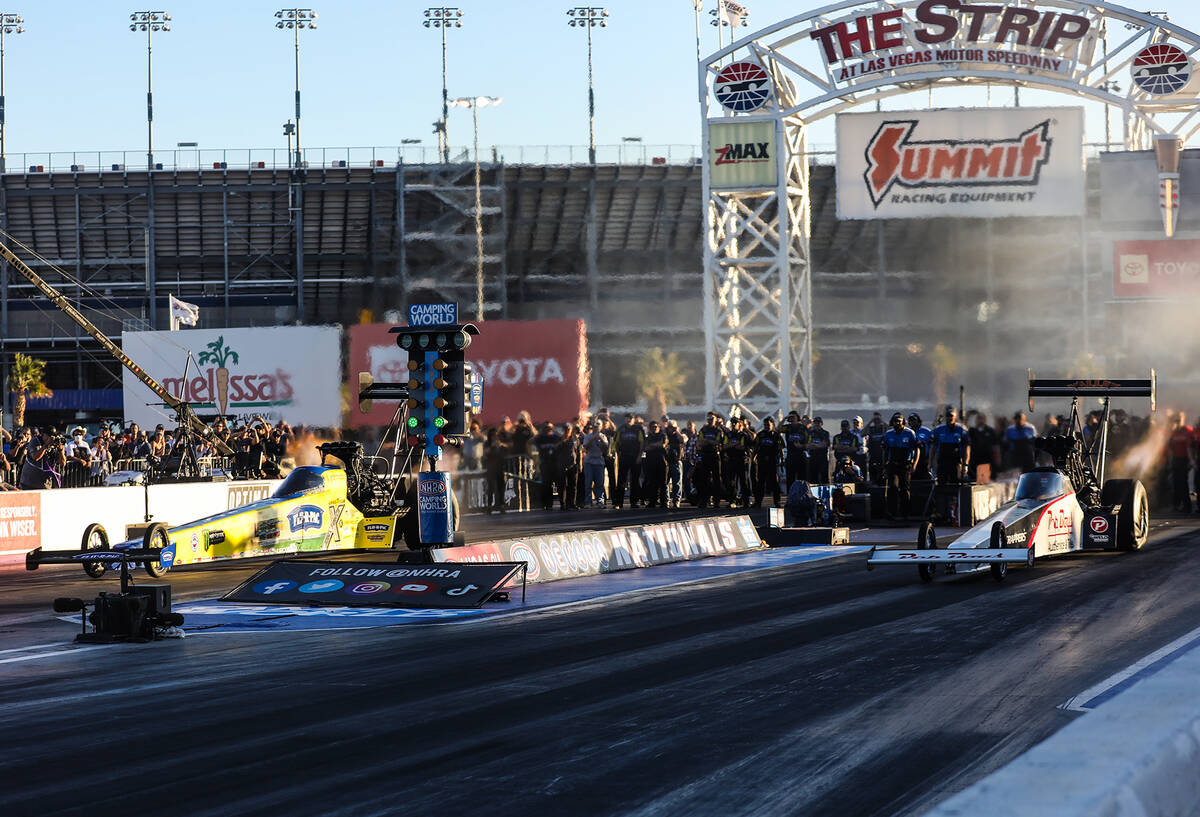 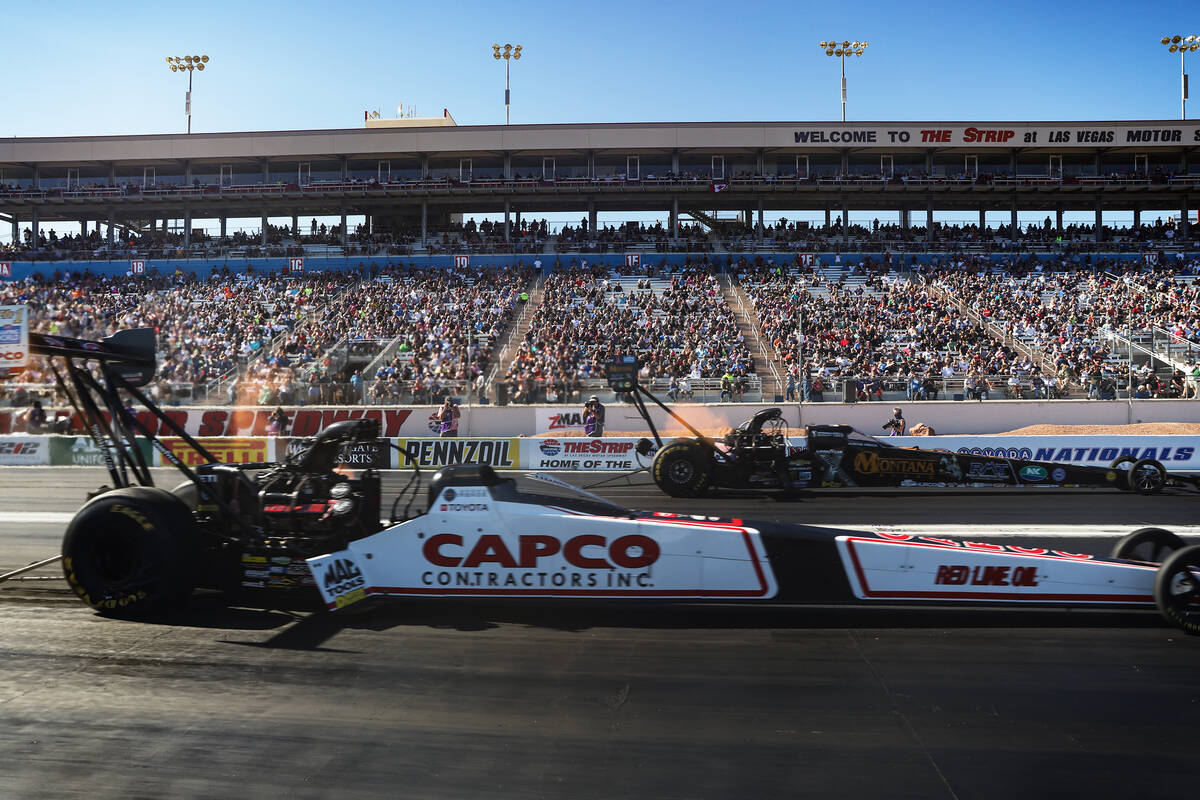 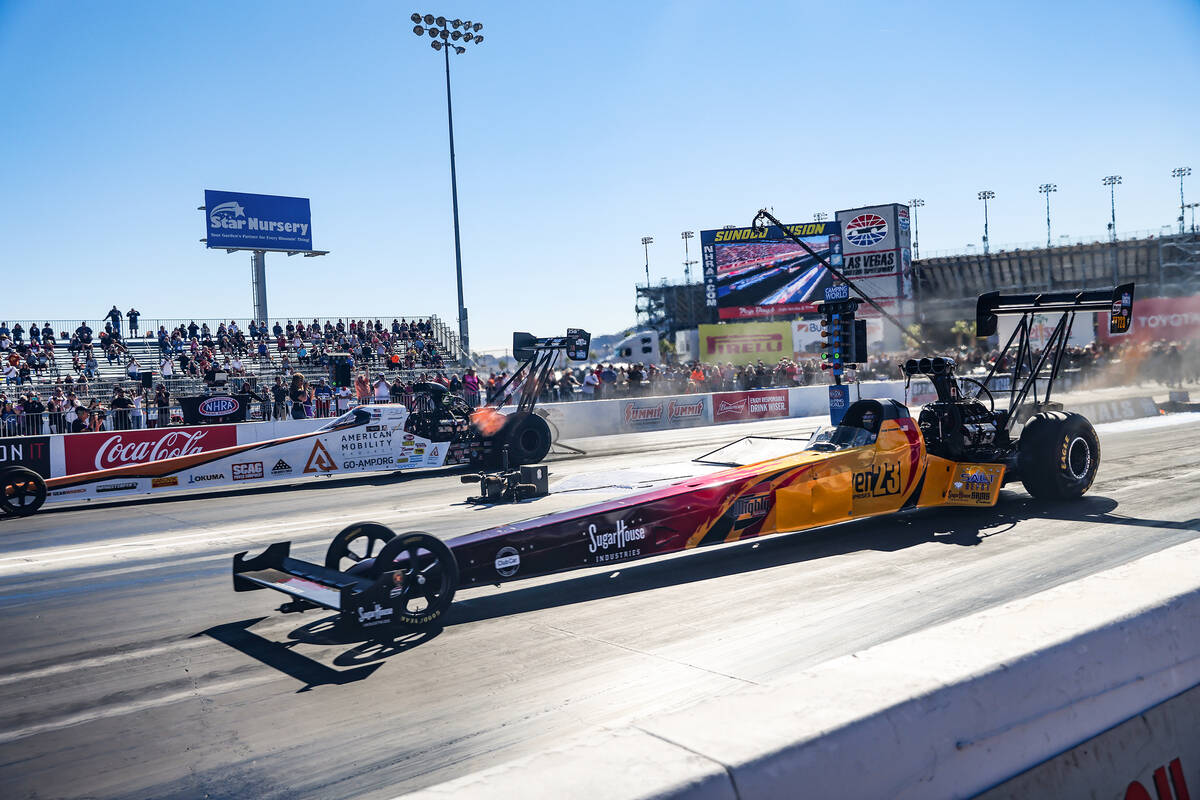 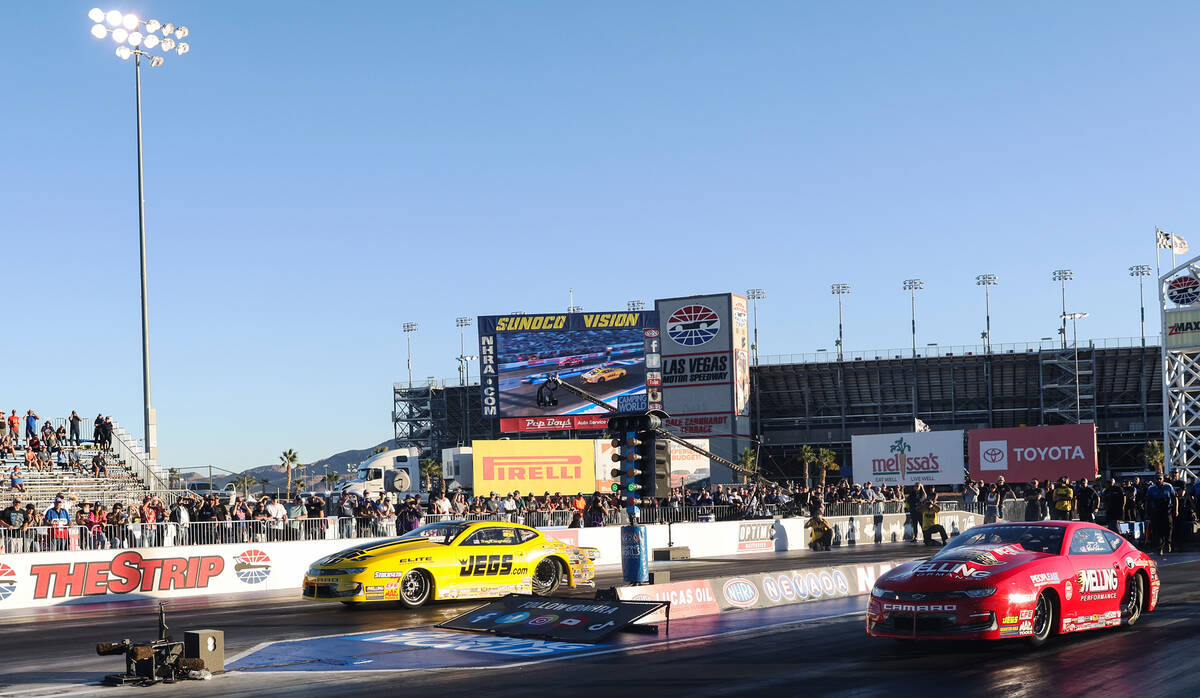 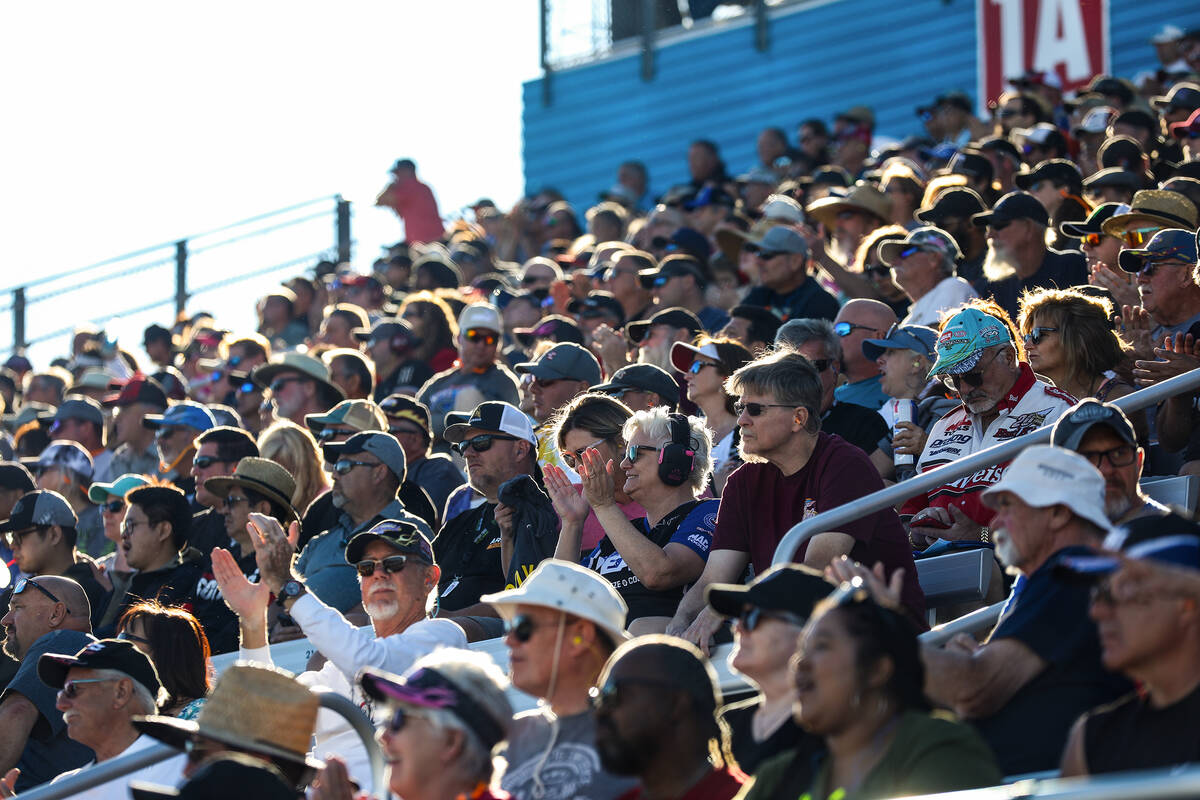 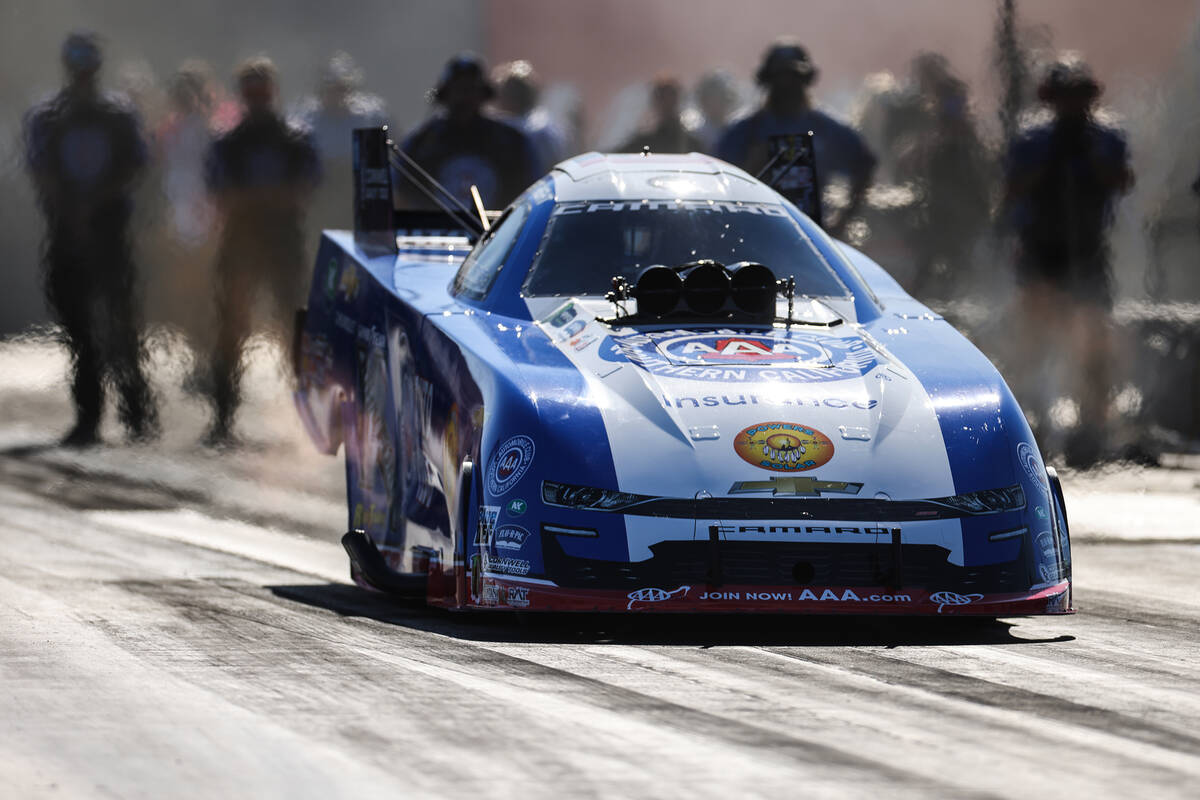 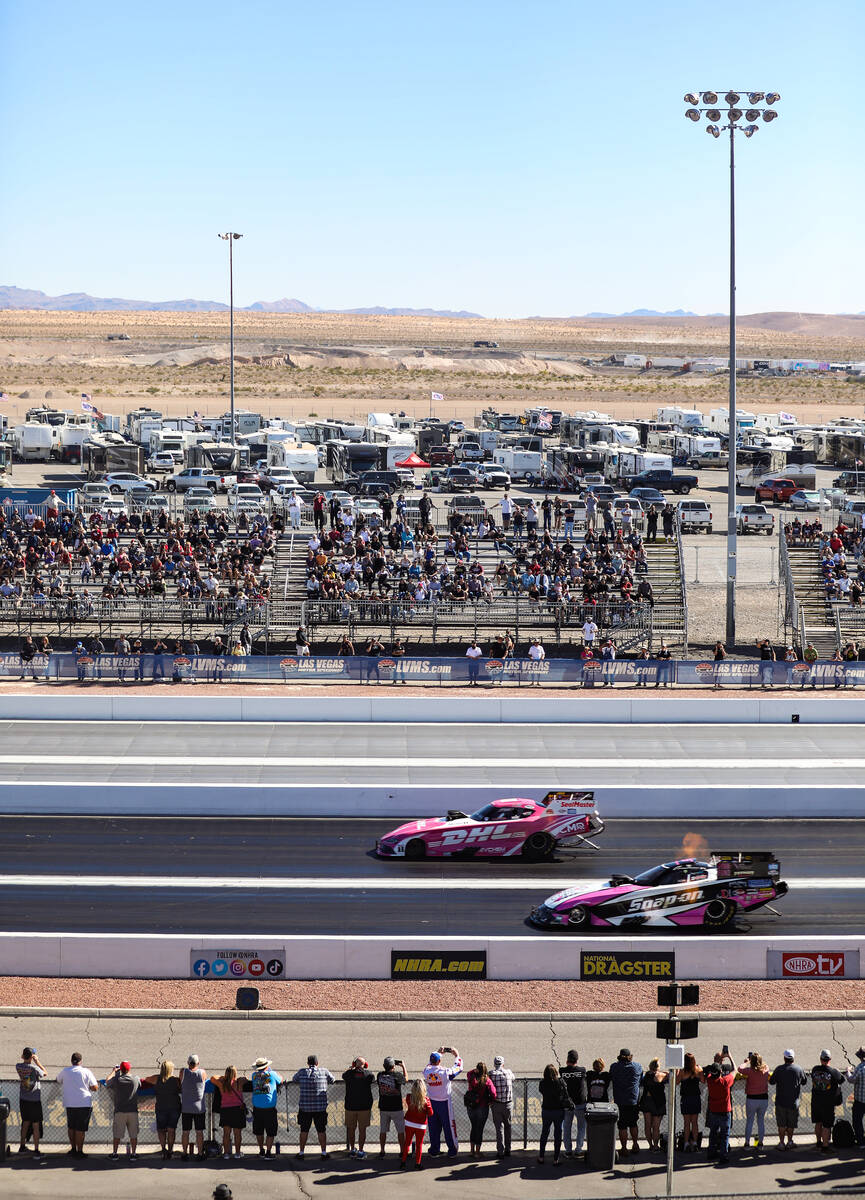 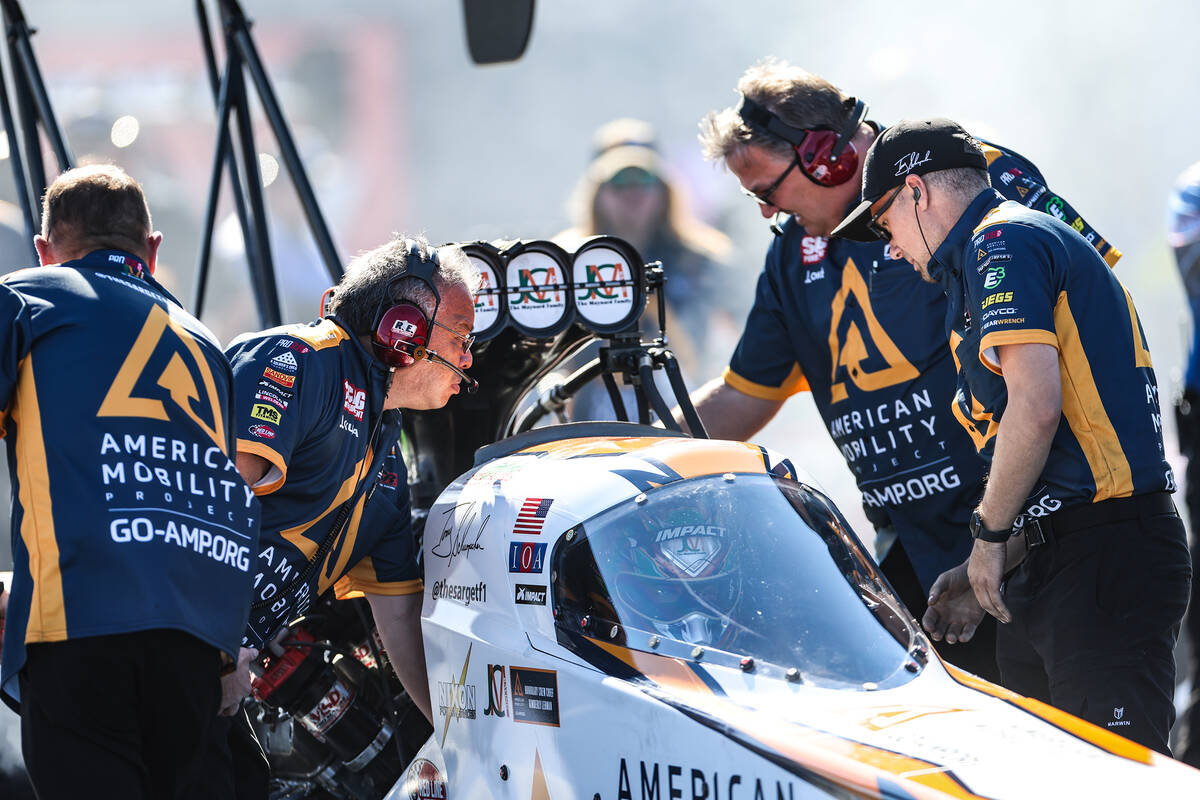 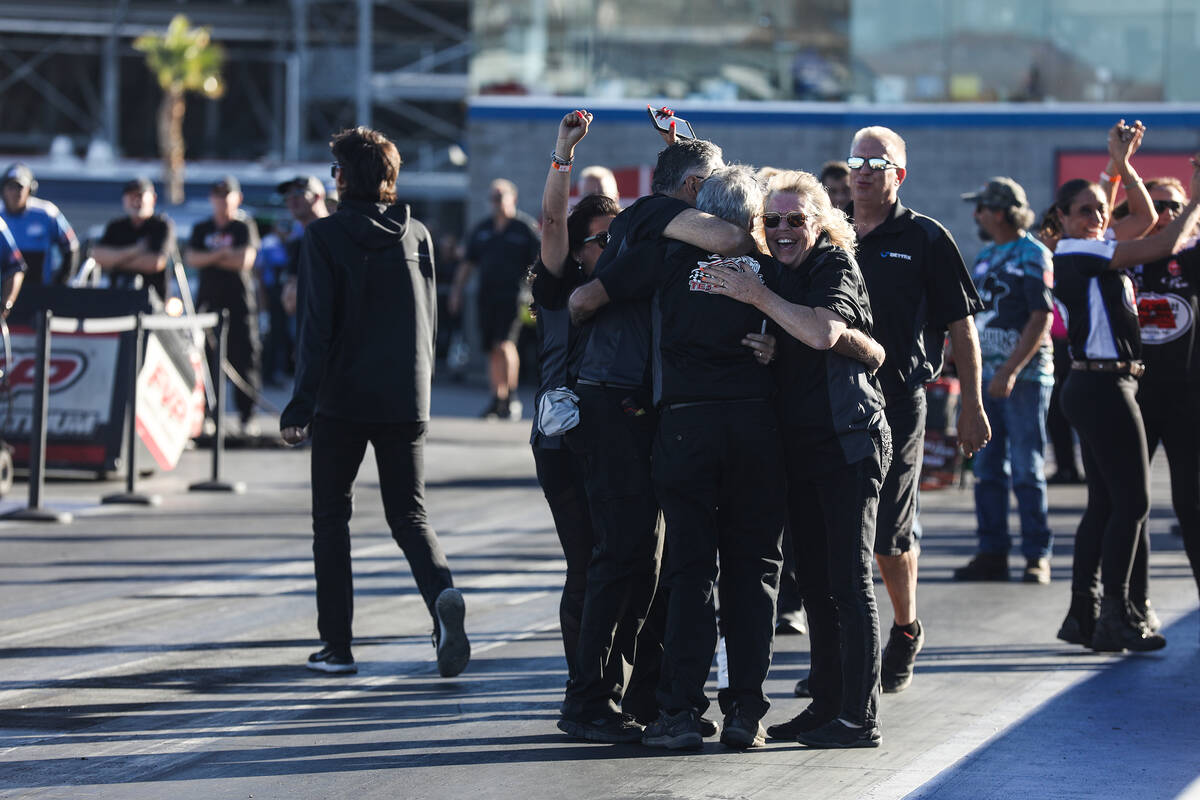 The team for Hector Arana cheers after he wins the Pro Stock Motorcycle race at the NHRA Nevada Nationals at the Las Vegas Motor Speedway on Sunday, Oct. 30, 2022, in Las Vegas. (Rachel Aston/Las Vegas Review-Journal) @rookie__rae

In many forms of motor sport, female drivers still are considered something of a novelty.

In the NHRA, others terms are used to describe them:

Racing in near-perfect conditions in front of a near-capacity crowd at Las Vegas Motor Speedway, Erica Enders added to her legacy as the most successful female driver in drag racing history by clinching her fifth Pro Stock title at the Nevada Nationals.

Enders sped down the lesser known of the Las Vegas strips in 6.64 seconds at 206 mph in the finals against Troy Coughlin Jr. to earn an unprecedented ninth victory at LVMS, her 10th of the season and 43rd of her career.

After that happened, LVMS elapsed time and speed record holder Brittany Force edged Mike Salinas in the Top Fuel final to take a seven-point lead over upstart Justin Ashley in pursuit of her second championship in the marquee Nitro division.

“It’s been a dream come true,” said Enders, who locked up the title by winning her semifinal race against Kyle Koretsky and entered the postrace news conference complaining of a bad case of champagne hair. “We set out like we set out every year — to win as many races as we can and to ultimately win the world championship.

“To win the championship in the manner we lost it last year — Greg (Anderson) had the dominant car and it still came down the wire at Pomona … we wanted to be the champs again. That’s the mentality we had. You can get lazy and go through the motions, but you gotta be hungry and fight tooth and nail every single week.”

That’s exactly what Force did, too, en route to her season-high fifth victory that followed a subpar driving performance the last time out in Dallas that dropped her 82 points behind Ashley — who lost in the first round Sunday — coming into Las Vegas.

“We dominated this weekend,” she said about sweeping all four qualifying rounds and her three elimination runs en route to her third win at LVMS and 16th of her career. “We struggled during the entire Countdown (playoff races), and we started to make ground last weekend and I screwed up.

“Coming into this weekend we really turned it around,” added the daughter of drag racing legend John Force, who beat Salinas on a hole shot (faster reaction time). “It shows you that Pomona is going to be exciting.”

The same will be true in Funny Car, although that battle was much tighter before the cars hit LVMS.

Robert Hight had a 20-point edge (one race round) over reigning champ Ron Capps. But when Capps went out in the second round and Matt Hagan topped Hight in the final, it left Hight with a 61-point cushion on Capps and 63 ahead of Hagan heading into the season final, which pays round winners points and a half.

Hagan, who left the juggernaut Don Schumacher Racing team to join forces with rookie car owner and NASCAR legend Tony Stewart during the offseason, alluded to the large crowd after racing to his third win of 2022.

“I think we put on a great show for these fans,” he said. “It was amazing to do a burnout and see everybody packed in. These are big grandstands to fill.”

The ideal weather and grippy track produced some of the most exciting drag racing in LVMS history, including Hector Arana Jr.’s charge from 15th qualifying spot to his 17th career win in the Pro Stock Motorcycle final. He edged Matt Smith by five-hundredths of a second.

Ladies day at LVMS also was observed in the sportsman ranks.

Teenage college student Madison Payne, driving a Top Alcohol Dragster built by Las Vegan Duane Shields, spoiled Stewart’s drag racing debut by nipping the NASCAR Hall of Famer and rookie NHRA team owner by the narrowest of margins — .0002 of a second — in the final round. 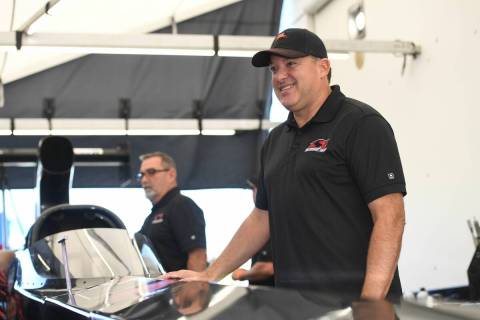 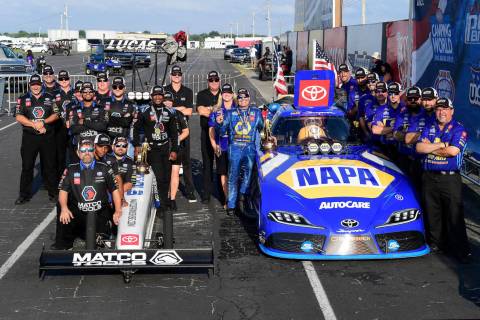 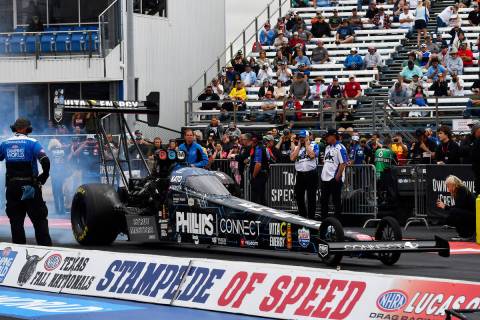 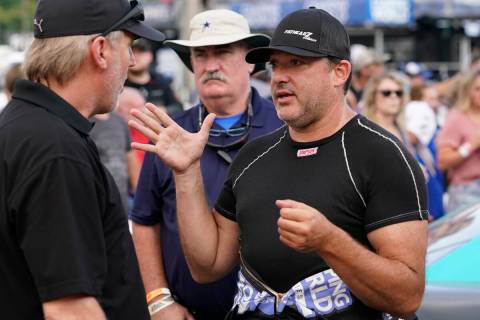 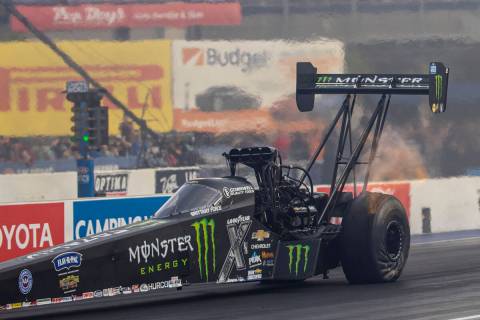 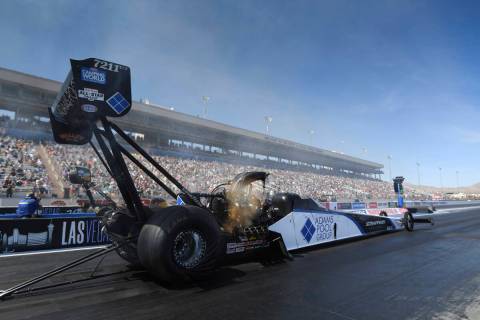 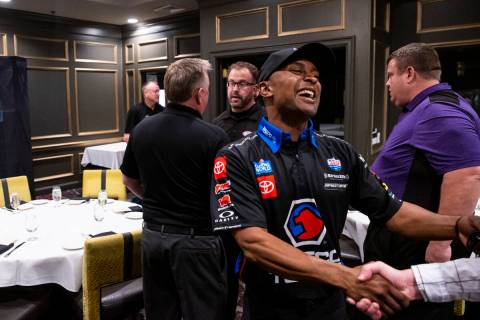 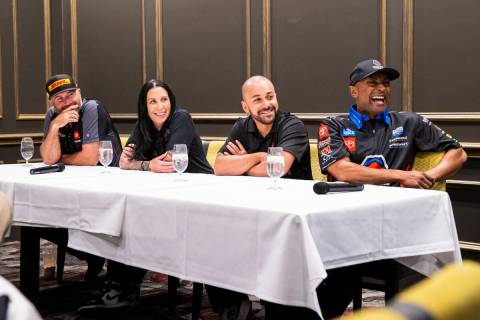 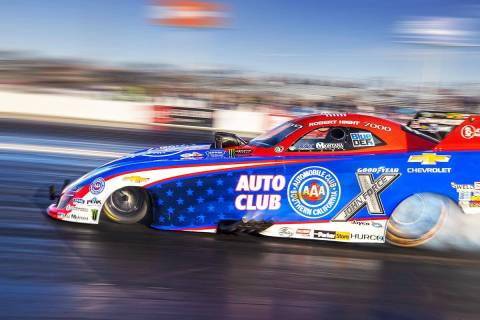