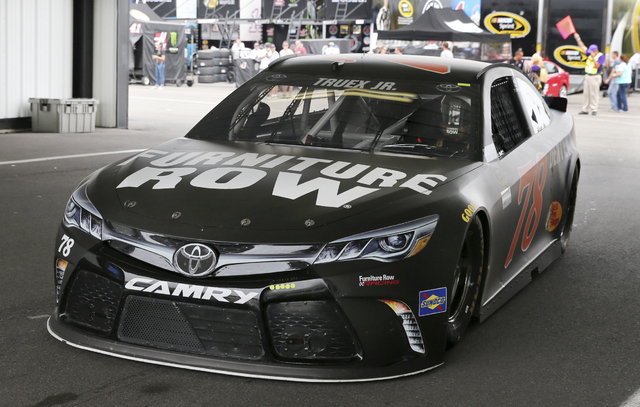 Martin Truex Jr. put on a dazzling show in the final moments of Saturday’s lone practice session at Pocono Raceway in preparation for Sunday’s Pennsylvania 400, the second race this season on the 2.5-mile tricky triangle. The combination of speed on short and long runs make him the driver to beat and his chances are further enhanced considering he starts from the pole.

On the 26th of his 34 practice laps run, Truex laid down the fastest lap at 176.377 mph; and when he completed his simulated race run he also had the best 10-consecutive-lap average. His Toyota, powered by Joe Gibbs Racing equipment, immediately got the attention of everyone in the garages and also Las Vegas oddsmakers. He opened at 7-1 odds but now has been moved to the race favorite at 5-1.

In addition to all of Truex’s outstanding highlights from Friday and Saturday that make him the favorite Sunday, he had plenty of credentials showing he was already a solid candidate to win. The Joe Gibbs-Toyota angle is the first as the five cars have won 10 of the 20 Sprint Cup races this season. Last season, a Gibbs Toyota won the week following a Gibbs (Las Vegan Kyle Busch) Brickyard win.

The next angle is that Truex won at Pocono for the first time in June 2015. He’s also currently the series leader with 989 laps led this season and he’s using the same chassis this week that gave him his only 2016 victory in the Coca-Cola 600 at Charlotte. In a similar situation to this week, he started from the pole at Charlotte and set a NASCAR record by leading a whopping 392 of the 400 laps. He got out front and stayed out front, and Pocono is much a much tougher place to pass.

There’s also some history in his favor with 15 of the previous 77 Pocono winners coming from the pole. The last to do it was Jimmie Johnson in 2013.

One trend that goes against Truex winning is that Chevrolet has always been the manufacturer to beat at Pocono, winning 32 races all-time, including seven of the last eight. Even Truex’s only Pocono win came when he drove a Chevrolet last season. Las Vegan Kurt Busch won the June race and he’s using the same chassis this week. However, the only other Chevrolet to win over the past 15 races this season was Tony Stewart at Sonoma. The notable absentee lately has been Hendrick Motorsports, which last won with Jimmie Johnson at Fontana in March. A 15-race drought for them is a big deal, but it also makes the manufacturer less imposing than years past at Pocono. Hendrick has won a track-record 17 times at Pocono, including five straight from from 2012-14.

In the June 6 race, rookie Chase Elliott had the look of getting his first career win as he led a race-high 51 laps and eventually settled for fourth place. He then finished a career-best second the following week at Michigan, but went into a tailspin finishing 21st or worse in his next four starts before placing 15th last week. Because of 11 top-10 finishes in his first 15 starts, it was easy to forget that he’s a rookie. Expect him to bounce back with a strong run this week. If he were to win he’d join Denny Hamlin as the only driver to win their first career race at Pocono.

With passing being so difficult, start position is paramount at Pocono. Only five of the 77 races all-time (6.4 percent) have been won from outside a top-20 start position. Jeff Gordon won for the sixth and final time at Pocono in 2012 starting from the 27th slot and Carl Edwards won his first appearance at Pocono in 2005 from the 29th position, the furthest back a winner has ever started. But it’s not likely this week with the current aero-package, which doesn’t bode well for Johnson and Gordon who start 21st and 24th, respectively. While Gordon coming out of retirement to win as a fill-in for Dale Earnhardt Jr. would be a nice story, and also pay well at 25-1, it was apparent last week at Indy during restarts he was extremely rusty. The slow restarts were already an issue with him over his last five seasons.

The three Richard Childress Racing Chevrolets looked very strong during all practice sessions and if believing the team can win its first race since Kevin Harvick departed following the 2013 season, then the odds to win should be enticing. Ryan Newman and Austin Dillon were both listed at 80-1 at the Westgate SuperBook while Paul Menard was 200-1. Dillon had the second-fastest 10-consecutive-lap average in the final practice while Menard was fastest in the first session with qualifying trim and starts up front in third. He had the eight- fastest lap during the final session. Newman, who won at Pocono in 2003, starts fifth. It is the best the three have collectively looked as a unit all season. There’s a lot worse things to spend $5 on than taking a swing for the fences with any of these drivers.