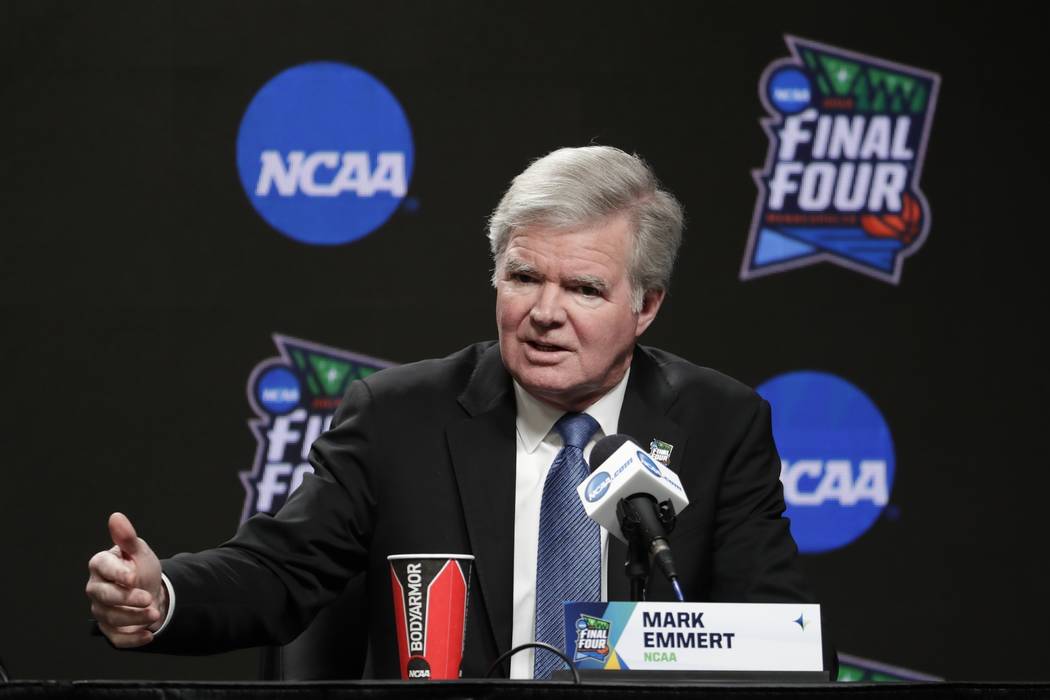 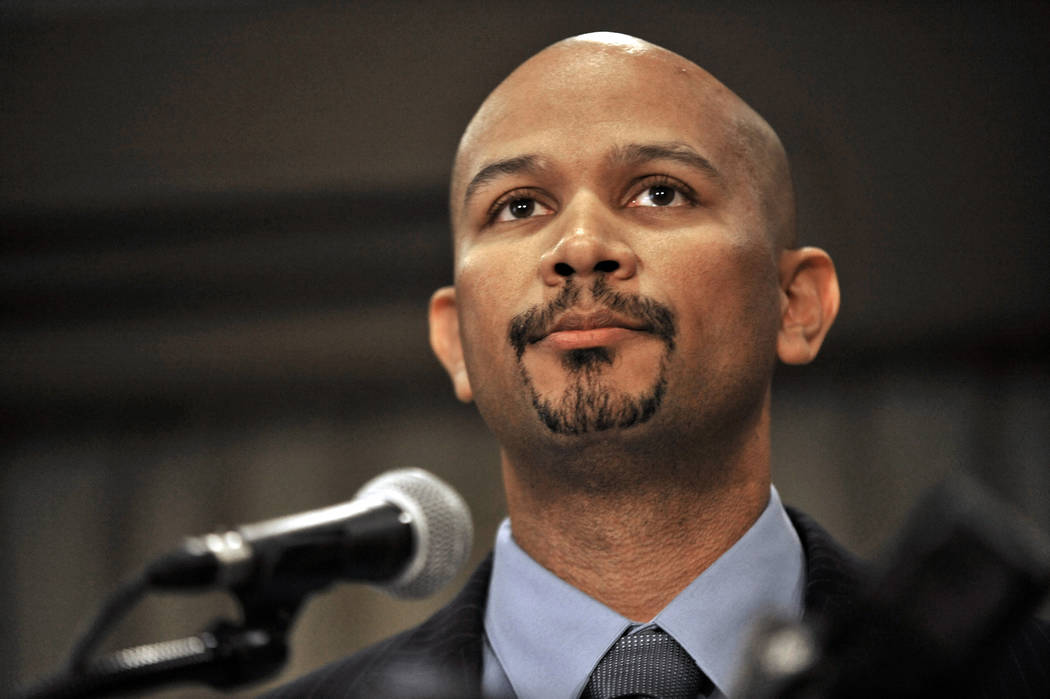 FILE - In this Jan. 28, 2014, file photo, Ramogi Huma speaks during a news conference in Chicago. As Congress considers whether to allow college athletes to receive endorsement money, the NCAA, of which Huma is executive director, and its allies spent nearly $1 million last year lobbying lawmakers to shape any reforms to the organization's liking. (AP Photo/Paul Beaty, File)

WASHINGTON — As Congress considers whether to allow college athletes to receive endorsement money, the NCAA and its allies spent at least $750,000 last year lobbying lawmakers to shape any reforms to the organization’s liking.

The NCAA last fall said it would allow athletes to “benefit from the use of their name, image and likeness” and is crafting rules to put in place for its 1,100 member schools. But the organization has turned to Congress to step in as more and more states follow the lead of California, where a law set to take effect in 2023 clears the way for athletes to earn endorsement money.

Organizations representing athletes have no paid lobbyists, leading to concern among some reform advocates that the deep-pocketed NCAA is shaping the debate. The NCAA’s pressure campaign comes as the Senate prepares for a committee hearing Tuesday on player compensation.

“The NCAA is going to fight for the status quo,” said Ramogi Huma, executive director of the National College Players Association.

Rep. Mark Walker, a North Carolina Republican who introduced a bill last spring that would guarantee players the right to earn money from their name, image and likeness, told The Associated Press “there’s no question” the NCAA’s lobbying has been effective.

“The NCAA is already at a position of power,” Walker said. “Otherwise you would have seen progress. … There’s been little to nothing done in this arena, and had the student-athlete had proper representation on the federal level, we’d be much further down this path than we are.”

The NCAA spent $450,000 last year on lobbying, according to disclosure forms reviewed by the AP. Of that total, $240,000 went to an outside firm, Brownstein Hyatt Farber Schreck — which lists Las Vegas among its 13 national offices — and $210,000 went to its in-house lobbyists. That’s the most the organization has spent on lobbying in any year since 2014. And it got some help from two of the Power Five conferences.

The Big 12 Conference has worked with lobbyist Kenny Hulshof, a former Republican congressman from Missouri, for several years, but it paid him less than $5,000 per quarter before ramping up its spending last year, records show. In the last six months of 2019, the Big 12 paid Hulshof $90,000 — some of it specifically to address Walker’s bill.

In total, the NCAA and the two conferences spent at least $750,000 on lobbying last year.

The NCAA’s ability to spend big on lobbying is a symptom of the larger problem, according to advocates for player compensation: a college sports system that generates $14 billion a year from athletes who are compensated only in scholarships and other education-specific aid.

“The NCAA is a well-heeled organization and college athletes, not by accident, don’t have the kind of organizational power or influence that the NCAA does,” Sen. Chris Murphy, a Connecticut Democrat who supports giving players more earning power, told the AP. “You have to be more assiduous in soliciting the opinion of athletes than you do the NCAA.”

The NCAA and its allies have a big reason to increase their spending: If Congress does nothing, athlete-friendly laws like the one in California will take effect around the country. Huma said 28 states are considering action to grant additional rights to college players.

Tom McMillen, president and CEO of the LEAD1 Association, a trade group for Division I athletic directors, shrugged off the influence of lobbying.

“You can have all the lobbyists in the world, but it doesn’t really make a difference,” he said. “This is a complicated process, getting something done through Congress in any kind of timely fashion.”

While he is not a registered lobbyist, McMillen, an 11-year NBA veteran and former Democratic congressman from Maryland who wrote a book in 1992 on the corrupting influence of money on college sports, is an eloquent advocate for the NCAA’s position. He said it’s essential to have “guardrails” on player compensation.

A panel discussion last month at Georgetown University’s law school was striking for the uniformity of participants’ views on the subject. McMillen appeared alongside Donald Remy, the NCAA’s chief legal counsel, and Amy Perko, CEO of the Knight Commission — a reform-minded nonprofit. All three agreed restrictions had to be placed on name, image and likeness compensation to avoid wrecking college sports as we know it.

“We are all committed to preserving the system of college athletics that exists nowhere else in the world,” Remy said.

McMillen said if player compensation reform was not done properly, it could lead to the “full professionalization of our college campuses.” Among the restrictions he said were necessary was a safeguard against players being paid exorbitant sums of money for endorsements or personal appearances, turning the compensation into “an end-around to pay athletes corruptly.” Such deals could influence recruiting and destroy competitive balance, he said.

In a December meeting with Murphy and Sen. Mitt Romney, a Utah Republican, NCAA President Mark Emmert said “everyone agrees” schools shouldn’t be able to use big endorsement deals to gain a recruiting advantage.

In fact, there’s plenty of dissent on that subject. Advocates for athletes say there is plenty of corruption in recruiting already and that concerns about excessive money flowing to players are a stall tactic by the NCAA and its allies.

“In no other industry, in no other context on a college campus do we tell someone that we are going to curb your value,” said Ricky Volante, CEO of the Professional Collegiate League, an upstart competitor to the NCAA that intends to pay salaries to college players.

Volante said he is concerned that no one is effectively countering the NCAA’s messaging in Washington. The work falls mostly to the NCPA — which is funded in part by the United Steelworkers — and the Drake Group, a nonprofit that advocates for academic integrity in college sports and a frequent critic of the NCAA.

Those groups have a combined lobbying budget of zero dollars.

“The NCAA has a permanent office in D.C. They have millions of dollars they can spend on lobbying and that’a very tough thing to fight. They’re a very powerful constituency,” said David Ridpath, interim president of the Drake Group. “I think we’re doing a pretty good job in Washington despite being the little engine that could.”

Huma said the public has become increasingly antagonistic to the NCAA. A recent poll by AP-NORC Center for Public Affairs Research found that about two-thirds of Americans support college players being permitted to earn money for endorsements.

“It was the same David-and-Goliath scenario in California, and the votes came in and there was unanimous, bipartisan support in our favor,” he said. “I think there’s a lot of power on being on the right side of history, the right side of public opinion, and I think that’s what played out there.”