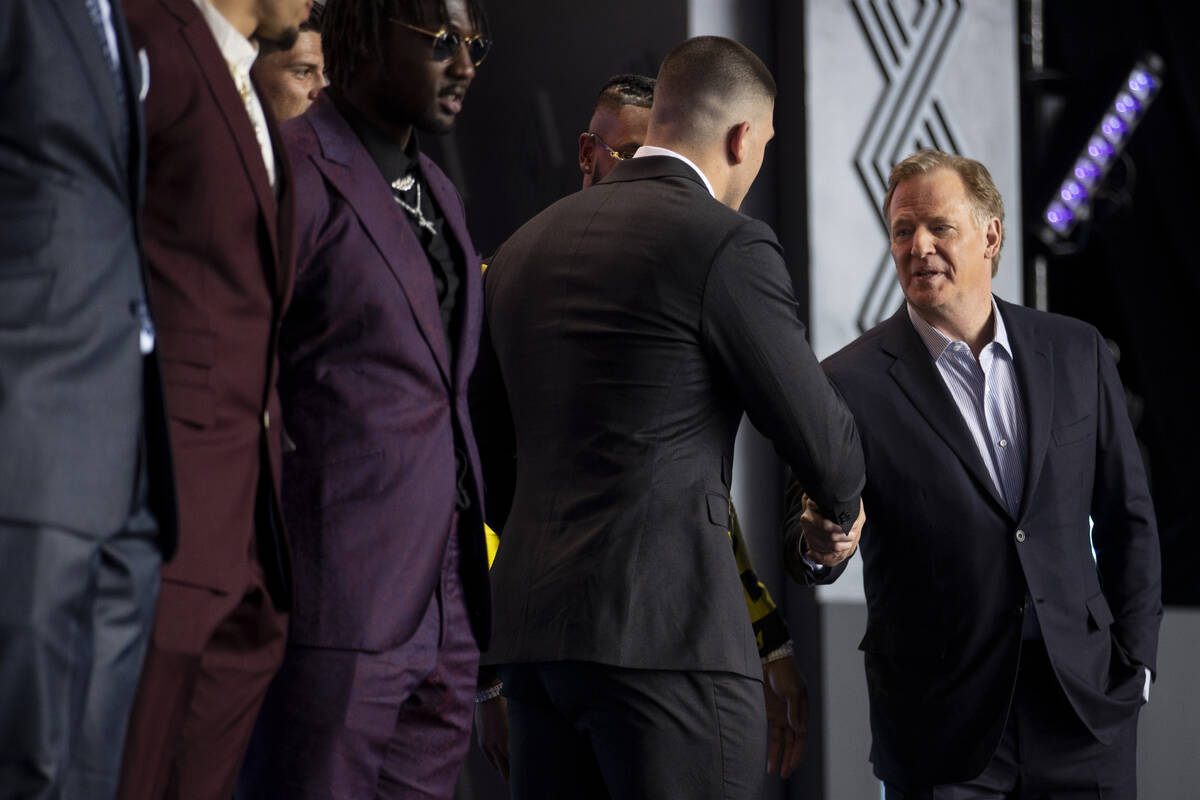 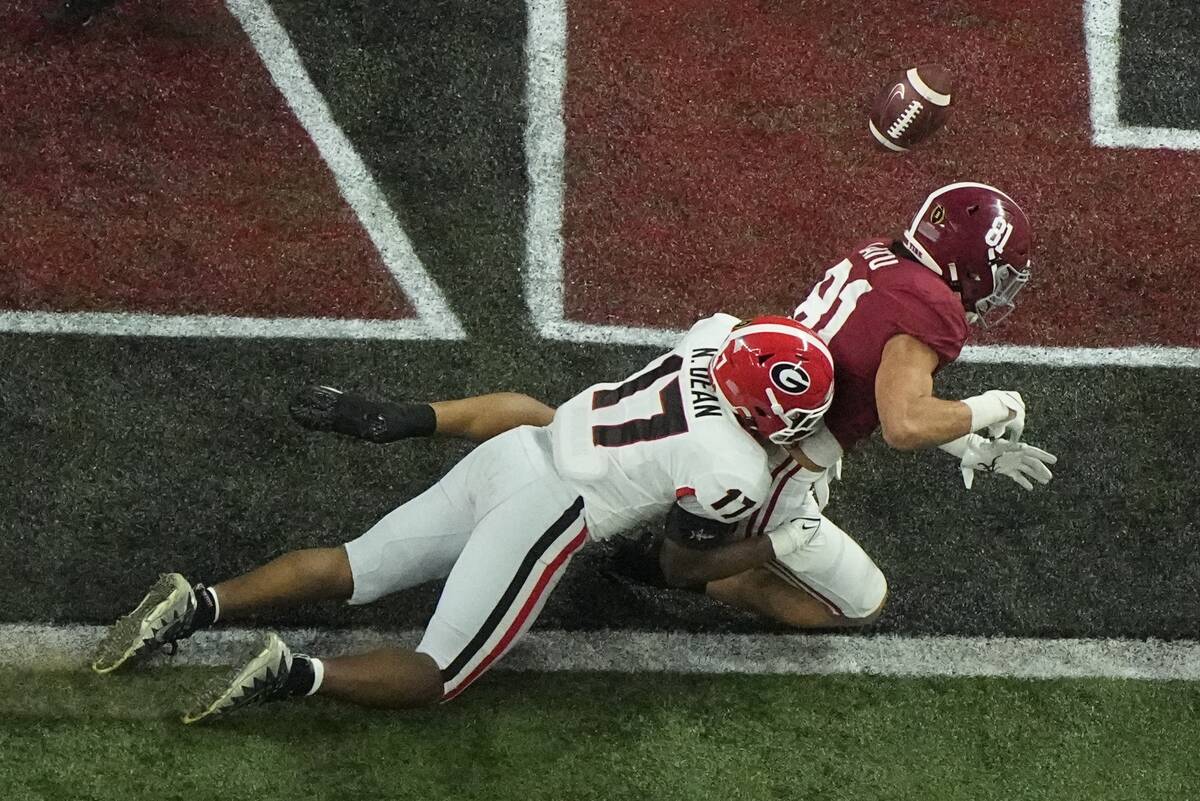 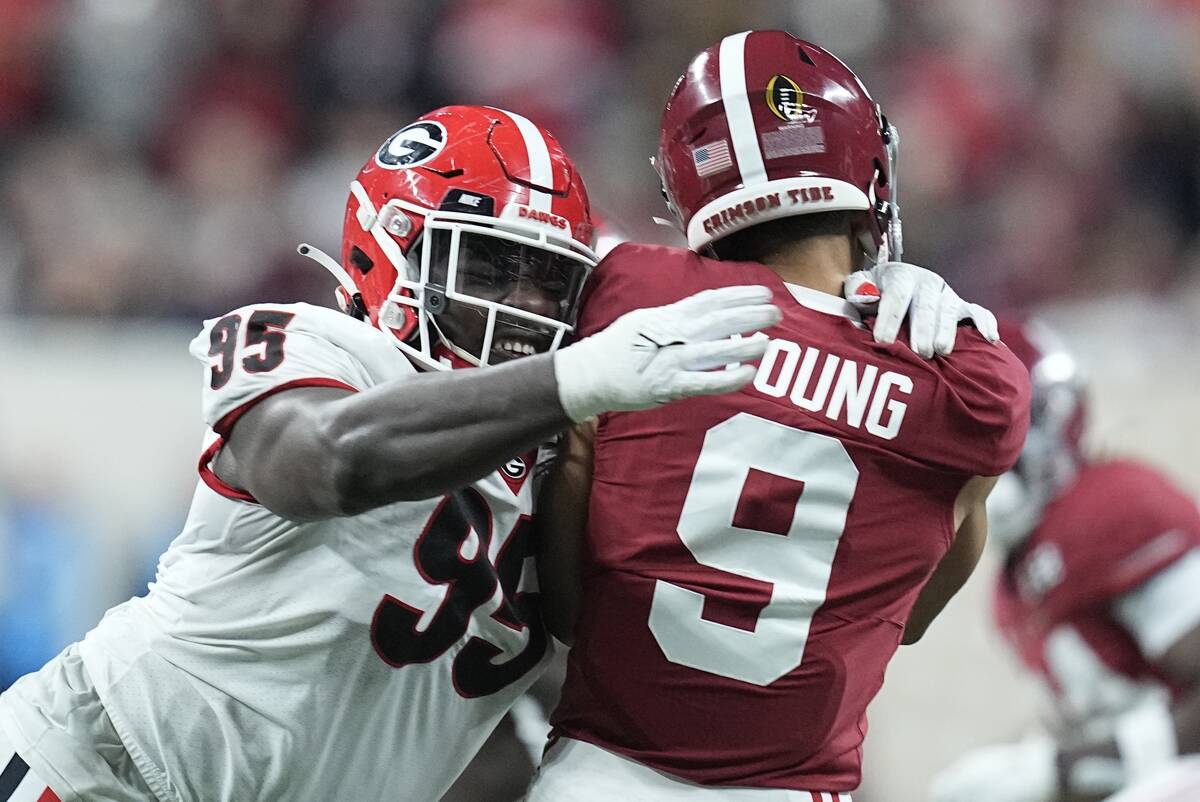 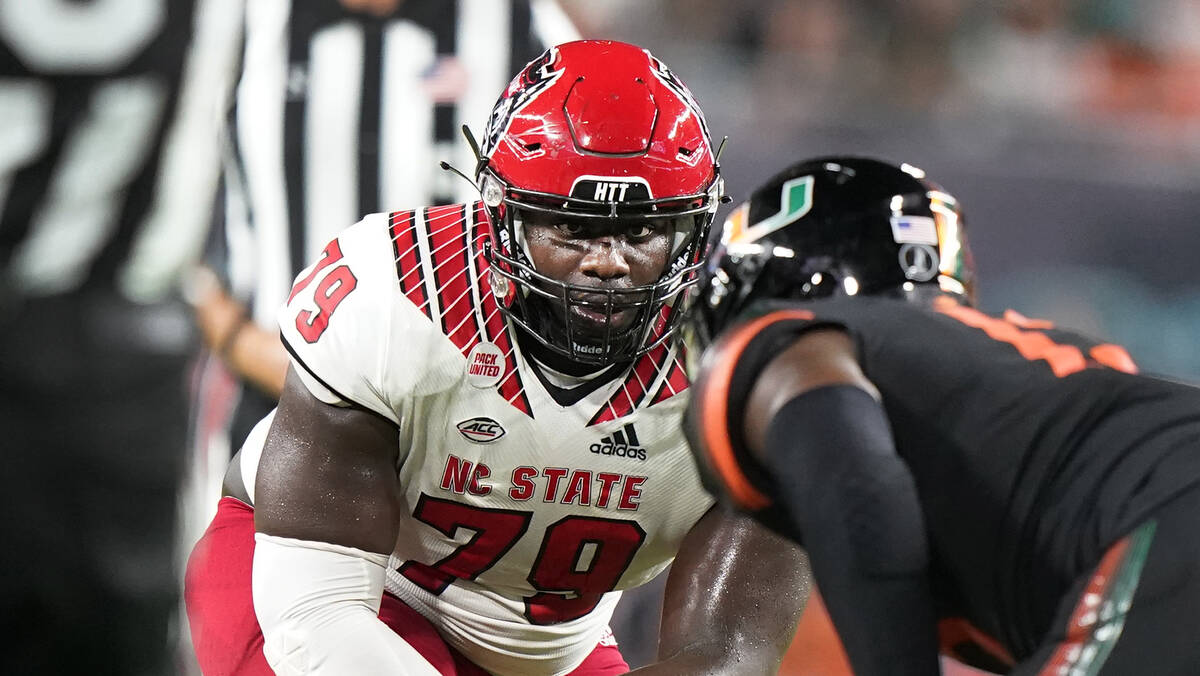 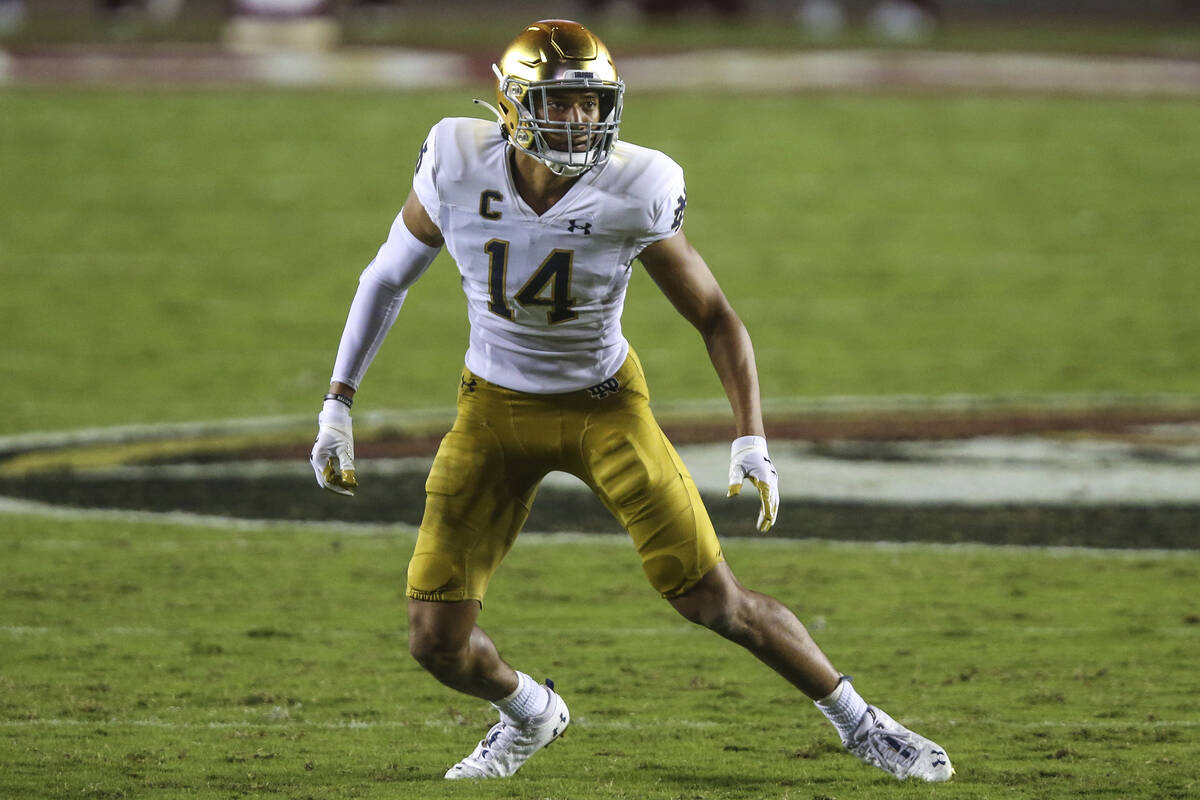 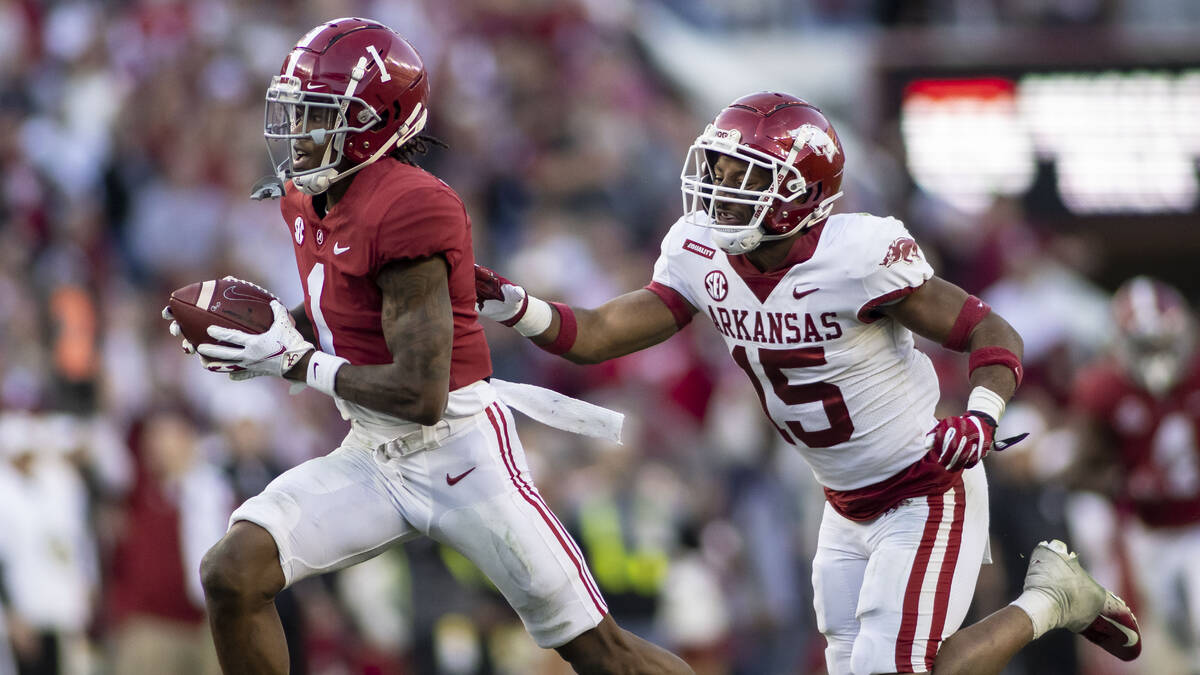 Alabama wide receiver Jameson Williams (1) runs by Arkansas defensive back Simeon Blair (15) with a touchdown reception during the first half of an NCAA college football game Saturday, Nov. 20, 2021, in Tuscaloosa, Ala. (AP Photo/Vasha Hunt) 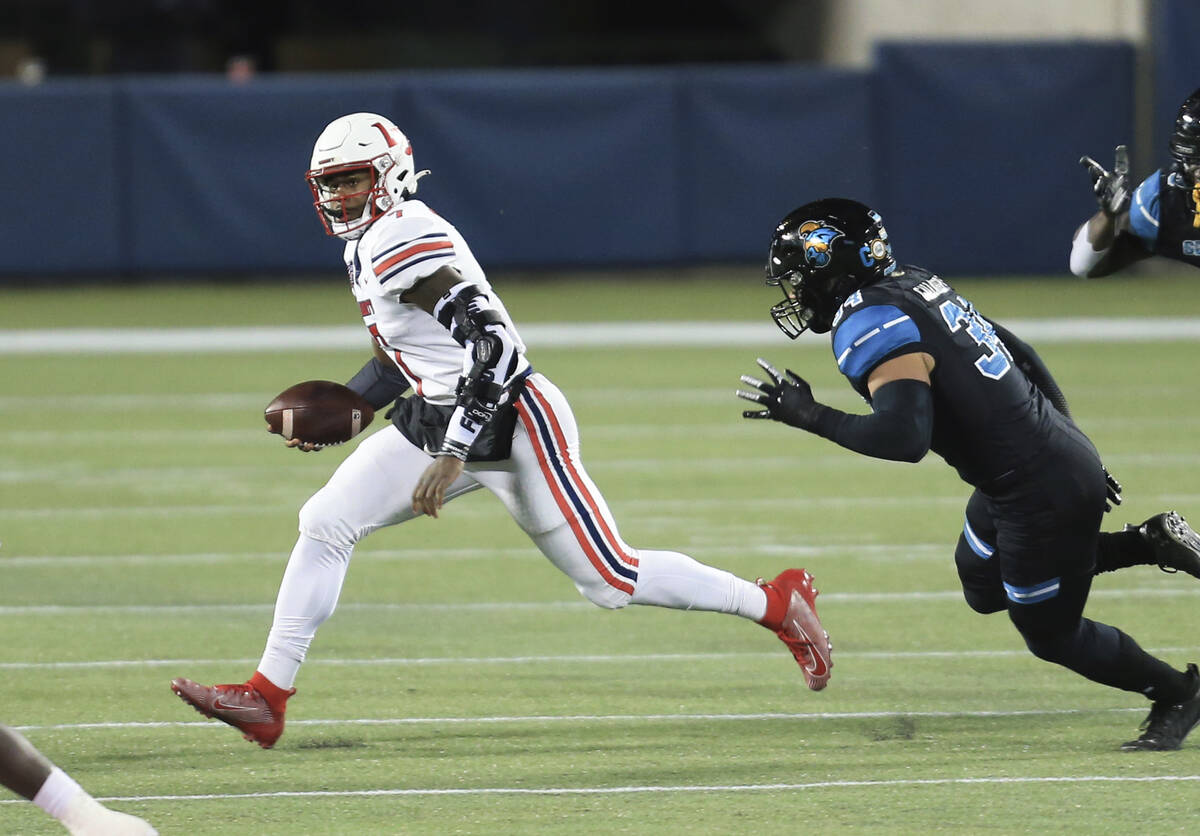 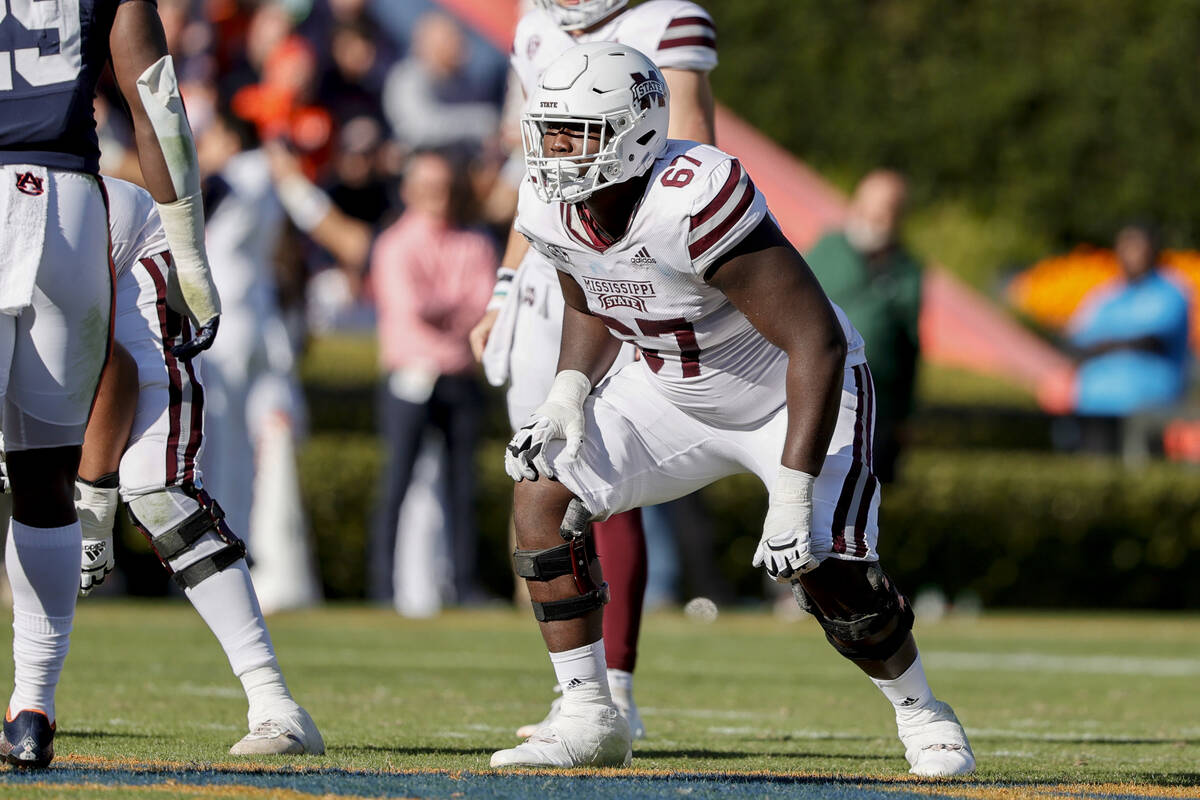 Mississippi State offensive lineman Charles Cross (67) lines up for the play against Auburn during the second half of an NCAA college football game Saturday, Nov. 13, 2021, in Auburn, Ala. (AP Photo/Butch Dill) 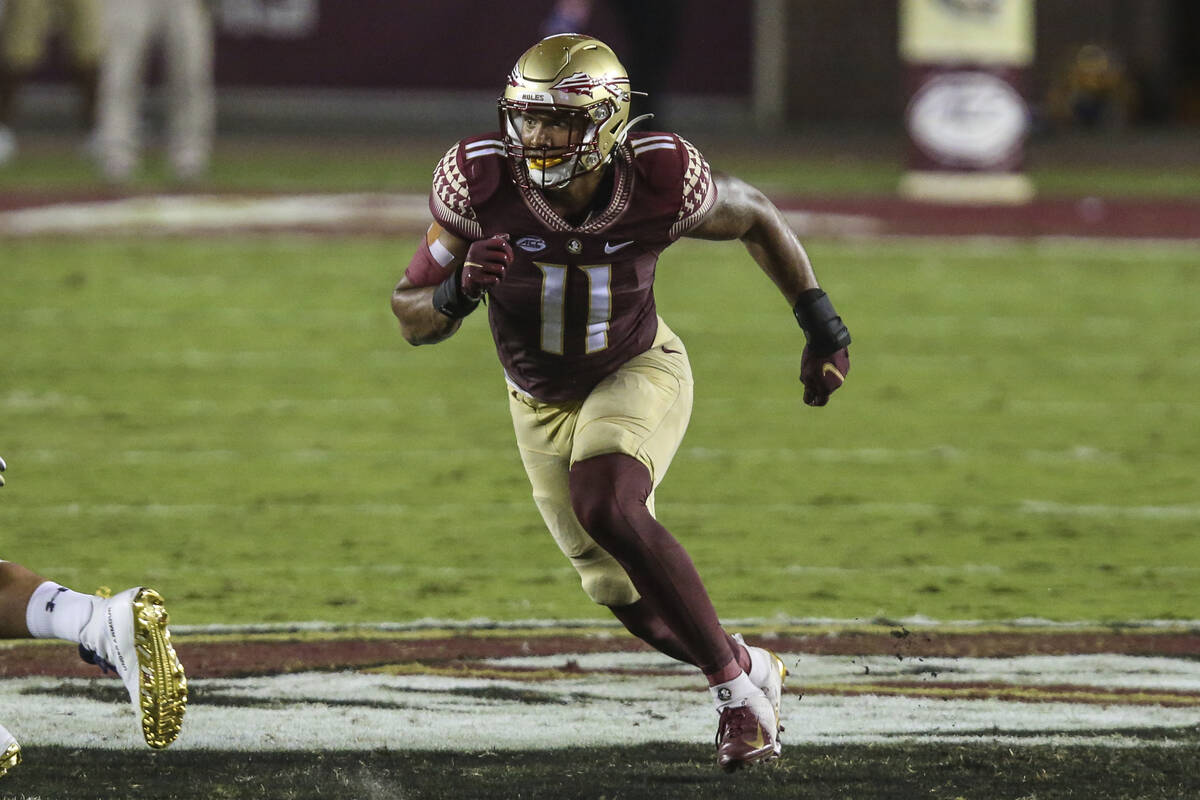 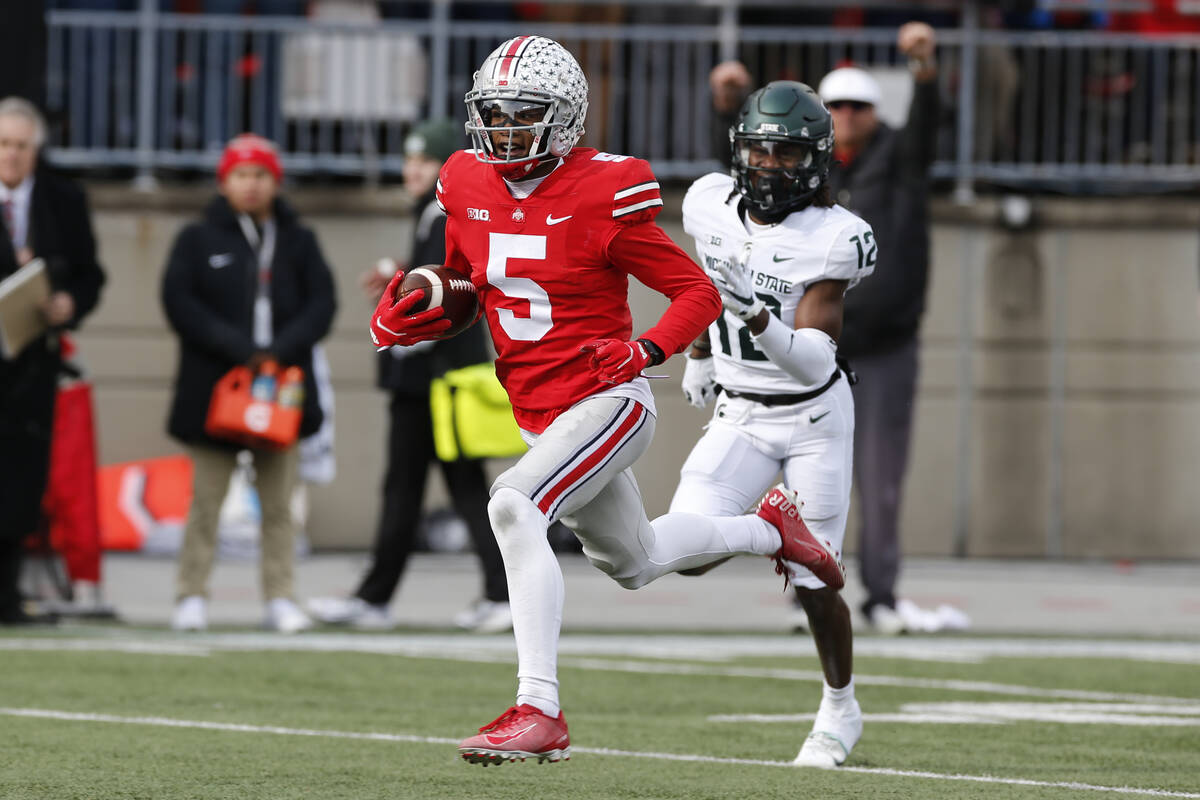 Here’s a look at the first-round selections Thursday in the NFL draft:

He didn’t play on the edge often on a loaded defense, but Walker is an immensely talented athlete who should be able to line up and rush the passer from anywhere on the line. Walker’s stock soared after a phenomenal combine performance.

Widely considered the best overall prospect in the draft, Hutchinson developed into a dominant pass rusher over the course of his college career. He had such a successful season for the Wolverines that he was named a Heisman Trophy finalist.

There were questions about where he would be picked after two injury-plagued and inconsistent seasons. He was as good a cornerback prospect as has come along in recent memory during his only full season in college in 2019.

He has good size for a corner and yet moves with tremendous fluidity. The stats are insane. Gardner never allowed a touchdown in coverage throughout his collegiate career and answered any questions about level of competition by allowing just four catches for 14 yards against Alabama in the national semifinals.

The only real questions about Thibodeaux had nothing to do with his ability to play football. He has diverse interests outside of football, and concerns about his desire to expand his horizons off the field and whether he loved the game might have kept him from going higher. He’s a dynamic pass rusher.

An aggressive bully on the offensive line who overwhelms defensive players at the point of attack and then seeks them out to maul them downfield. He has the versatility to play guard, but figures to be an anchor to start rebuilding a woeful offensive line.

Special athleticism for a massive human being. He played three positions the past three years and excelled at all of them. Neal hasn’t always taken full advantage of his natural superiority, so if he can add consistency, he can be a star.

The best receiver in the class in terms of winning battles at the catch point. He doesn’t have to be open to make receptions, as he has the ability to snag balls away from defenders and help out his quarterback.

Perhaps the best pass blocker in the draft. Cross played in a system in which he wasn’t asked to run block often, especially out of traditional run sets. He will have to make that adjustment.

He can win with acceleration at the line of scrimmage and change directions without losing much speed. Wilson excels at getting open down the field and is good at tracking the ball and adjusting his path.

Olave is sharp and precise in his routes, probably the most technically sound receiver in the class. He stayed an extra year in college and should immediately help a receiving corps desperate for production. The only real question was his pure speed, and he showed more than enough of it at the combine.

He’s a threat to score on pretty much every play. Williams averaged 20 yards per catch on nearly 80 receptions last season, a ridiculous stat. He’s in a class by himself in terms of his ability to get open and gain separation.

Davis blew up social media with a phenomenal combine performance despite his 6-foot-6-inch, 340-pound frame. He’s a freak athlete who destroys single blockers and is willing to take on double teams. He will need to improve his stamina to take on a full NFL workload.

The tape doesn’t lie. Hamilton was widely viewed as one of the best defensive players in the draft until his disappointing time in the 40-yard dash. He might not win many races, but he usually looks like the fastest player on the field when ranging sideline to sideline to hunt tackles.

He didn’t have the greatest season for the Aggies, but was asked to play four positions on the line. He settled at left guard for the final four games and was phenomenal. He excels at dispatching the player in front of him and getting to the second level.

What he lacks in size, he makes up for in big-play ability. Dotson might project more as a slot receiver, at least at first, but he should be able to get down the field and put a significant amount of pressure on the defense. He had just two drops last season.

He has played guard and tackle, which gives the Chargers options as they continue to protect Justin Herbert. Johnson has a prototypical guard body and is exceptional at gaining and maintaining leverage in his blocks. There is no wasted motion.

A big, powerful receiver who is best with the ball in his hands. Burks doesn’t have great speed, but rarely got caught from behind. He has a somewhat similar game to that of A.J. Brown, whom the Titans traded to the Eagles for this pick.

An aggressive blocker with a nasty streak. It’s difficult to find film in which he didn’t overwhelm defenders in the run game, though he did play at a lower level. He’s still a work in progress as a pass blocker.

Any potential weather issues shouldn’t bother Pickett, who played his college games at Heinz Field, home of the Steelers. He has above average arm talent and excels at throwing the ball on the move. He shows confidence going through his progressions. Pickett didn’t excel until last season.

He’s good in zone coverage and excels as a tackler. He doesn’t have ideal size, but plays much bigger than his measurements.

He possesses a rare combination of high-end athleticism with the willingness and ability to play physical. Walker can shut down tight ends and running backs in coverage, then line up on the next play and attack the quarterback from the edge. He might be the best tackler in the class.

A physical corner who excels in press man coverage, at which he can overwhelm and dominate receivers. That has led to a troubling amount of penalties at the college level.

He has blossomed into a dominant force, particularly in the run game. Smith has all the natural ability to go with prototypical size and traits. He has a high ceiling.

NFL teams often talk about versatility. That’s not Linderbaum. He’s a prototypical center, and that is what he will do in the NFL, but he will do it well. He has the athleticism to get to any block and is getting stronger.

He’s far better as an edge setter in the run game than as a pass rusher, though he put consistent pressure on quarterbacks last season. He doesn’t possess elite athleticism, which might have contributed to his slide down the draft board.

There isn’t much he doesn’t do well. He was a safety before bulking up to play linebacker, so his range and coverage skills are good. He has developed into a good pass rusher from the edge. He does have a tendency to leave his feet too early as a tackler, though he often finishes the play anyway.

A massive athlete who often has his prospective blocker beaten on the first step. He also has more than enough strength to clog up the middle of the line and free his teammates to make plays.

One of the few selections who was nowhere near a first-round projection. He started college as a defensive end and has done a great deal of work adding bulk while trying to keep his athleticism. He tried to play center at the Senior Bowl to show NFL teams he was willing to do whatever it takes to succeed. He’s a good athlete for the position and has a mean streak.

He might not be an overly impressive athlete, but he was consistent and productive throughout his career in the Big Ten. Karlaftis, who was born in Greece and didn’t move to the U.S. until he was a teenager, relies on generating power from a low center of gravity. He’s also relentless.

He’s versatile with the ability to cover a wide receiver on one play and rush the passer on the next. While Hill might not have the size to play a full-time role in the box, he’s a willing tackler and makes up for the lack of heft with his energy. He should have no problem playing man in the slot.

He makes up for a lack of top-end speed with the ability to quickly diagnose a play. He probably isn’t ready to be left alone on receivers in the slot, but he won’t miss many tackles. He will be consistent and dependable, most likely thriving in the box.