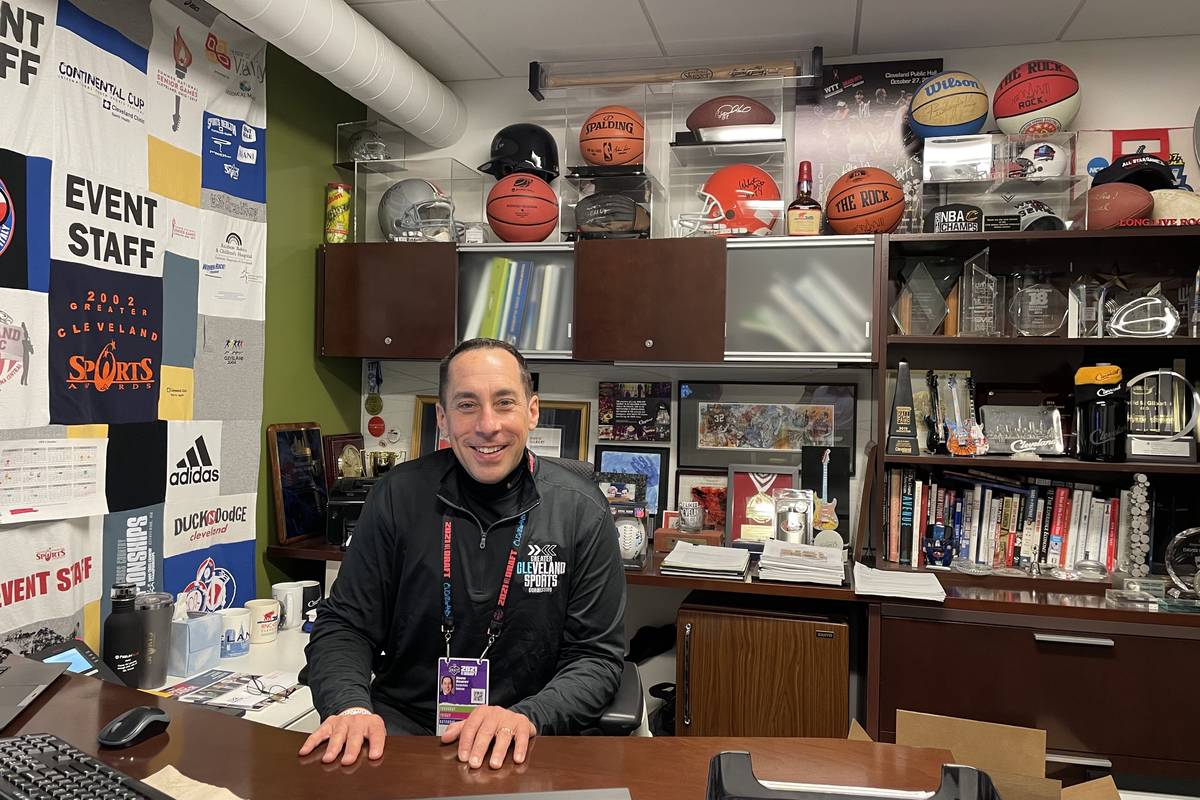 Destination Cleveland president and CEO David Gilbert poses for a photo at his office in downtown Cleveland on Friday, April 30, 2021. Gilbert helped plan the 2021 NFL draft and is excited about the draft's potential in Las Vegas next year. (Sam Gordon/Review-Journal)

CLEVELAND — David Gilbert’s downtown office is getting crowded. Filled with the memorabilia he’s gathered during his 10-year tenure as the president and CEO of the region’s tourism bureau, Destination Cleveland.

Autographed basketballs and footballs line one shelf. Trophies and books line another. Pictures and collectible banners line the walls, showcasing his commitment to the city and its sports.

But rest assured, there is room in there somewhere for one more trinket — his NFL draft credential.

“It was emotional, to see our city lit up. Looking around, to see the crowds, it was beautiful,” Gilbert said. “It’s almost like (the city) was coming out of its cocoon.”

The football festival that is the NFL draft concluded Saturday evening, but not without leaving an indelible imprint on Gilbert and his beloved hometown. It invigorated the city and its economy amid the coronavirus pandemic while showcasing it to a national audience of tens of millions.

The Review-Journal spoke with Gilbert about what the draft meant to Cleveland and what it could be like next year in Las Vegas.

Answers have been edited for length and clarity.

RJ: What were the most important things that you and the city wanted to showcase this weekend?

Gilbert: There isn’t another entertainment event in America other than the Super Bowl that has this many eyeballs on it, so one — we wanted to make sure the little things were done right in how the event showcased the community. The NFL does a fantastic job of incorporating (the host cities). This draft very much had an essence of Cleveland and it will look and feel very different from next year’s draft, which will have a very Vegas feel to it.

RJ: We were supposed to have the draft in Las Vegas last year. Before COVID-19 shut everything down, were you looking at what Vegas was doing?

Gilbert: We had a big team set to go out there. We just felt terrible for Vegas. So much had already gone into it. Time, energy and expenses. Thankfully, you guys got it back only a year later. But we’ve had people at the draft for probably the last four years in working on getting it. In our industry, people are very willing to share. It’s pretty cool that cities are so willing in this industry to share with each other and kind of open up their books of everything they did. If it can help the next city be successful, that’s great.

RJ: Before the virus, what was the anticipated economic impact and what is it now?

Gilbert: We don’t know yet. We’re going to be doing a study. In Vegas, I want to say their number in their study was somewhere around $120 million. That’s what we would have used as a base, which is a crazy number. That doesn’t include the media value of 40 or 50 million eyeballs. We don’t know what it’ll be here. Certainly it’ll be some fraction of that. It’s hard to put a number on it.

RJ: What can Las Vegas expect next year?

Gilbert: Vegas is unlike any other place. The NFL draft has become this traveling NFL party. That’s what it is. It’s almost become a pilgrimage. Because (the draft) is free, I think it’s going to be just in a good way crazy town. Vegas gets big events all the time, but this is so different. It’s a cultural phenomenon all around football. As amazing as Vegas is, I think it’ll be one of the cooler events Vegas has ever hosted. It’s just that different and unique. I can’t think of another sporting event like it. It’ll be crazy impactful economically, but it’ll be impactful beyond that. In my mind, that’s not what this is about. Locals should just take part in it.

RJ: Any advice for Las Vegas?

Gilbert: Embrace it. There’s going to be some things that are going to be a pain in the rear, but it’ll be well worth it. Embrace what this is bringing to your town more than just the dollars. The dollars will be there. Just make the most of it. It’s a great platform. … You can take advantage of ‘What do you want the world to think of Vegas?’ This can be a big part of it.