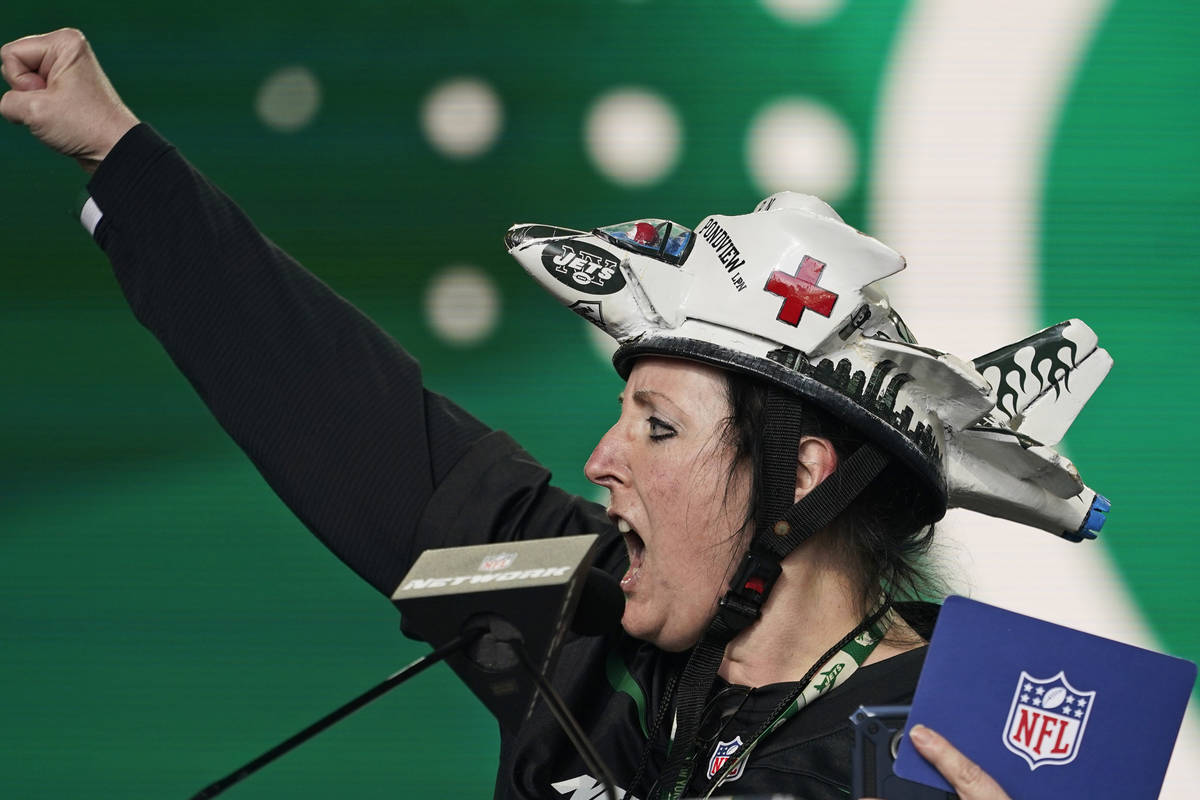 New York Jets fan of the year Lynne Pondview reacts after the Jets selected Michael Carter II, cornerback for Duke, in the fifth round of the NFL football draft, Saturday, May 1, 2021, in Cleveland. (AP Photo/Tony Dejak)

Michael Carter hopes he can be an impact player for the Jets after being selected by the team in the NFL draft on Saturday. So does Michael Carter.

In what promises to be a nightmare for beat writers, broadcasters and the public relations department, the Jets selected two players with the same name.

The odd coincidence is believed to be a first in NFL draft history. According to Jets head coach Robert Saleh, the unique situation already caused confusion during ESPN’s draft coverage.

“When we took Michael Carter the running back, ESPN threw up Michael Carter II on the screen and we were like, ‘Whoa, whoa, whoa, wait a minute,’” Saleh said late Saturday. “We had to check the notes to make sure we made the right pick. But, lucky for us, Michael II ended up falling to us and we were able to scoop him up too. We’re excited to have them both.”

The first one, a fourth-round pick, went to North Carolina. The fifth-round pick, in an added bit of irony, attended UNC’s arch-rival Duke.

This shouldn’t be confusing at all.

The former Tar Heel was quick to welcome his namesake and acknowledge the humor in the situation shortly after the former Blue Devil’s name was called.

The Jets also added wide receiver Elijah Moore on Friday after trading up to take offensive lineman Alijah Vera-Tucker in Thursday’s first round. Defensive back Elijah Campbell was already on the roster.

“It was the hope to get the MC squared,” general manager Joe Douglas said in jest. “Going into the day, we were trying to corner the market on Alijahs and Elijahs and Michael Carters.”

Carter, the safety, was asked about Carter the running back. He was quick to offer a scouting report on his former ACC rival.

“Great running back, contact balance off the charts,” Carter II said. “Catches the ball, very versatile. You can ask a lot of him and he can do a lot for your team. He’s going to definitely make an impact.”

The Jets didn’t use any of their Day Three picks on specialists, perhaps because they couldn’t find a punter named Michael Carter.

Late rounds are often a time to find good under-the-radar talent or specialists who may bring some unique talent that makes it so general managers want to keep them away from other teams.

Pittsburgh was the only team to draft a punter, selecting Pressley Harvin III with just six picks remaining in the seventh and final round.

The former Georgia Tech punter brings more heft to the NFL than most punters. He is 5-11 and tips the scales around 255 pounds. He can also throw the ball, a trait that seemed to intrigue NFL scouts at his Pro Day when they had him toss a few passes.

Cincinnati selected the only kicker when they snagged Florida’s Evan McPherson in the fifth round. He made four kicks of more than 50 yards last season.

Two long snappers were selected in the sixth round as Carolina took Alabama’s Thomas Fletcher at No. 222 and Washington followed with Camaron Cheeseman from Michigan three picks later.