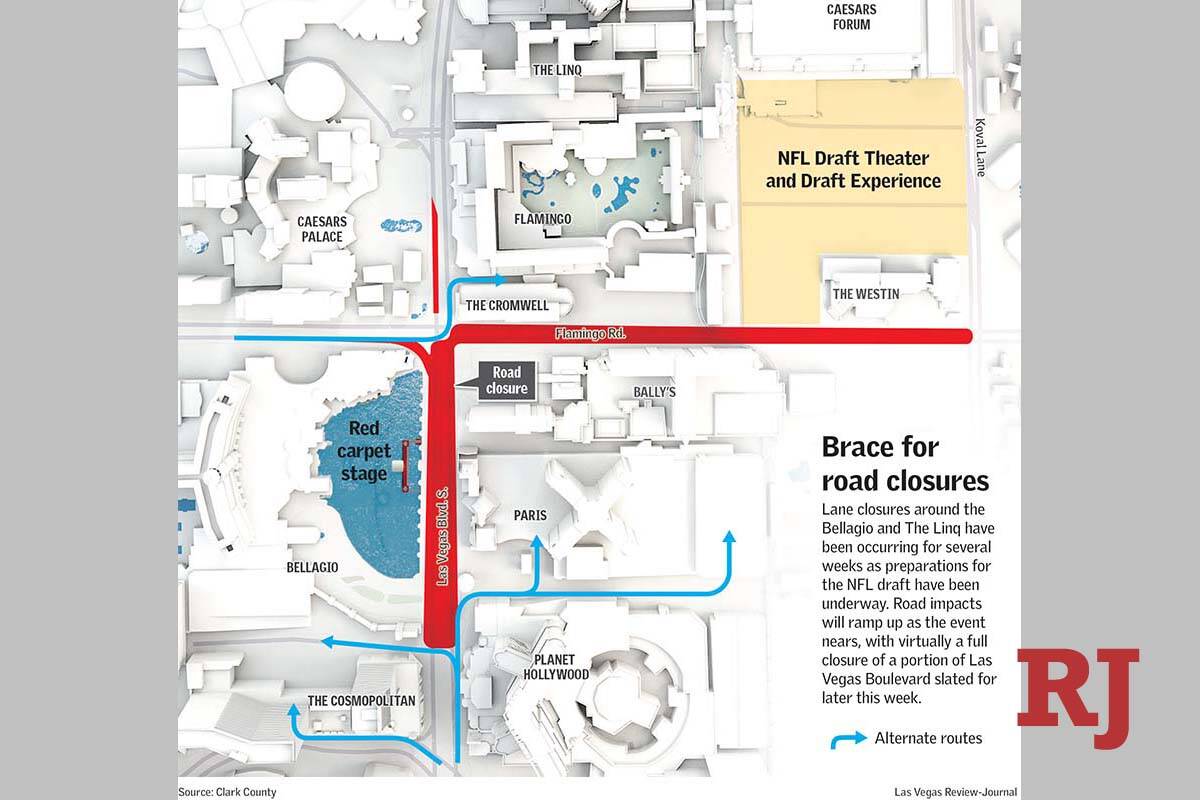 After two years of talking about NFL draft week, it is finally here.

Sin City will become the epicenter of football Thursday-Saturday as hundreds of thousands of fans will descend on the area around the Strip and Flamingo Road to take in the draft, Las Vegas style.

What they’ll find is road closures that will make travel around the Strip difficult.

“While these road closures are significant, I believe they directly translate into jobs and opportunities for our local community and for the destination as a whole,” said Clark County Commissioner Michael Naft, who also sits on the Las Vegas Convention and Visitors Authority’s board of directors. “I’m hopeful that the impact will be mitigated by the months of communication with stakeholders and transportation alternatives that have been established.”

Lane closures in the area around the Bellagio and The Linq have been occurring for a couple of weeks and will continue through May 6.

The lane closures include:

■ The two outside lanes of Las Vegas Boulevard from Flamingo to the Bellagio entrance near The Cosmopolitan of Las Vegas. A third lane on this stretch will be closed from 6 a.m. to 5 p.m.

■ The outside eastbound lane of Flamingo from the Bellagio north porte-cochere through the outside lane of channelized right turn at Las Vegas Boulevard.

■ The southbound curb lane on Koval Lane from Winnick Avenue to Krueger Drive.

Road impacts will ramp up as the event nears, with virtually a full closure of a portion of Las Vegas Boulevard slated for a three-day stretch.

Starting at 10 p.m. Wednesday and running through 9 p.m. Saturday, the Strip in front of the Bellagio, Bally’s and a portion of Paris Las Vegas will be shut to vehicle traffic. Flamingo between the Las Vegas Boulevard intersection and Koval will also be closed during those times.

The area will reopen to vehicle traffic overnight between 1 and 6 a.m., mainly to allow for resorts affected by the road closures to receive deliveries.

Motorists looking to navigate around the resort corridor can still do so on multiple roads.

Drivers can opt to take Tropicana Avenue, Harmon Avenue, Spring Mountain Road or Sahara Road to travel east-west in and around the Strip area.

Fans looking to attend the draft without having to navigate the resort corridor can use various public transportation options.

The Las Vegas Monorail will be one of the best options to travel around the corridor during the draft.

Area residents can park at the Las Vegas Convention Center and hop on the monorail at the station there and be dropped off right at The Linq, where draft headquarters is located. Locals can receive discounted monorail tickets with a valid Nevada ID.

Visitors can use the monorail by catching a ride at one of the seven stations along the nearly 4-mile track running just behind the Strip.

The Regional Transportation Commission’s popular Game Day Express service used for Raiders and UNLV football games will be available for the draft.

Fans can park and hop on a bus at five locations around the valley and be driven to within a half-mile of The Linq site for a $4 roundtrip price. The locations are Red Rock Resort, Green Valley Ranch Resort, Santa Fe Station, Boulder Station and M Resort.

Buses will drop fans off and pick them up after the draft from the parking lot at the corner of Flamingo and Paradise Road.

Departure times on Thursday will run from 10:30 a.m. to 7 p.m. Return trips will run throughout the day with the last bus departing at midnight.

On Friday, departure times will run from 10:30 a.m. to 8 p.m. Return trips will run throughout the day with the last bus departing at 1 a.m.

And on Saturday, departure times will be from 7 a.m. to 3 p.m. Return trips will run throughout the day with the last bus departing at 8 p.m.

The RTC’s Deuce Strip service will be useful for those traveling in from the downtown and North Las Vegas areas. The Deuce loop detour will pick up attendees at Cashman Field, the Mob Museum and the Bonneville Transit Center and take them to the NFL Draft Experience.

Anyone taking an Uber, Lyft or taxi to the draft area should be dropped off at the designated drop off area located at the Tuscany hotel-casino on East Flamingo Road. From there it’s about a half-mile walk to the draft area.