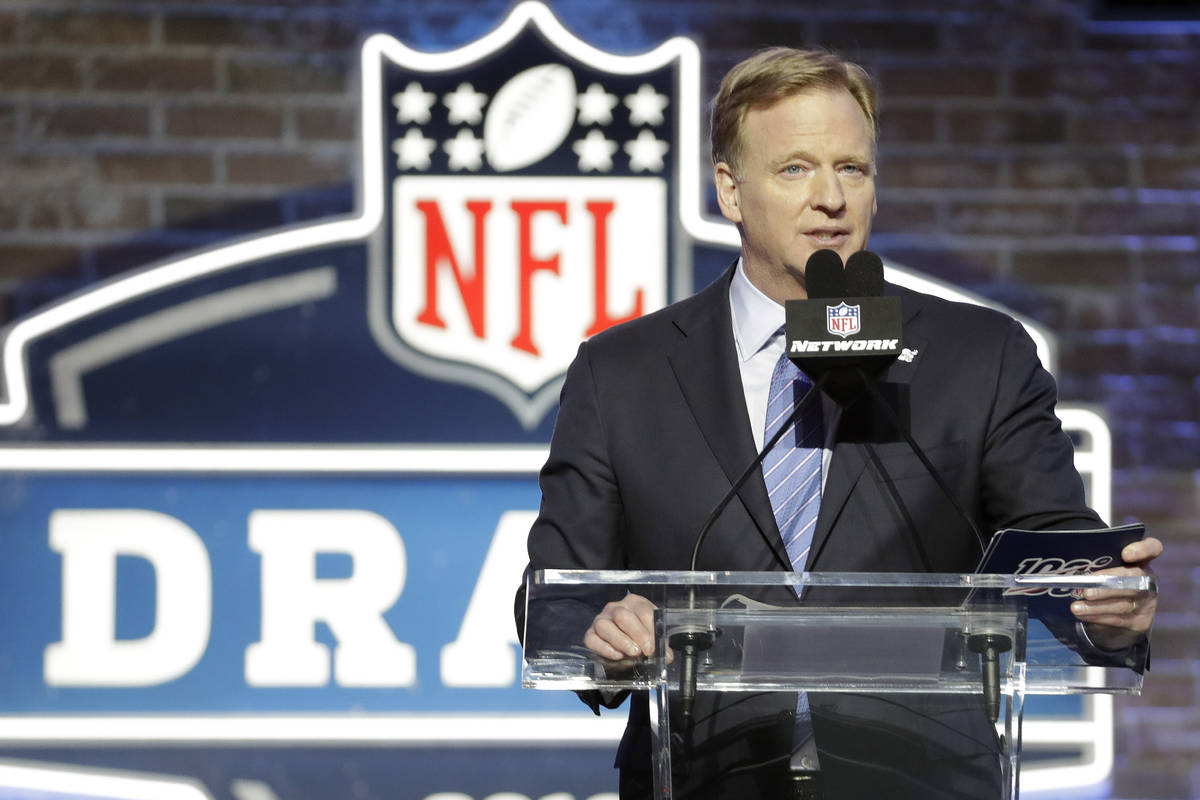 FILE - In this April 25, 2019, file photo, NFL Commissioner Roger Goodell speaks ahead of the first round at the NFL football draft in Nashville, Tenn. In a memo sent to the 32 teams Monday, April 6, 2020, and obtained by The Associated Press, NFL Commissioner Roger Goodell outlined procedures for the April 23-25 draft. The guidelines include no group gatherings. (AP Photo/Steve Helber, FIle)

The NFL’s virtual mock draft Monday was a journey into the unknown for many officials from the league’s 32 teams.

With general managers, coaching staffs and support staffs working from their home offices spread out across the country because of the coronavirus pandemic, the odds of technical glitches cropping up were pretty high. And, according to various team officials who participated in the exercise, there were initial technological obstacles to overcome.

“Let’s just say the waters were very choppy and bumpy, but we brought the ship in,” one high-ranking team official said.

“Hard to know whether some of the issues are on our end or the league’s end,” another team’s decision-maker said in a text message during the early stages of the mock draft. “But it’s good to get it debugged.”

Among the early problems were background noise on a general managers’ conference call when too many participants forgot to hit the mute button and slow-functioning computers because of bandwidth limitations.

As the draft unfolded, the issues were resolved and teams were able to get through the exercise.

With COVID-19 forcing the temporary closures of team facilities and social distancing restrictions forbidding large gatherings, the NFL will conduct the three-day draft beginning Thursday in a virtual manner. What was supposed to be the debut of Las Vegas as a host city for a big-time NFL event is now a scaled down made-for-TV event.

Commissioner Roger Goodell will announce picks from his home basement, prospects will be sequestered in their homes and each team’s decision-makers will carry out their duties from their homes.

It’s new territory for everyone, not the least of whom are the general managers and coaches tasked with orchestrating their drafts. Even under normal circumstances, the event is a major undertaking for which months of preparation are needed.

Switching to a virtual draft further complicated the process. That was evident from the outset Monday when ESPN’s Adam Schefter reported a technical issue caused a 2½-minute delay as the Cincinnati Bengals were making the first pick.

As the day went on, though, team officials indicated the process began smoothing out and the communication issues were resolved.

The mock draft lasted about two hours and consisted of two rounds. Teams were allowed to negotiate and execute mock trades to get a feel for what that process might look like during the real draft. The hope was for clubs to become comfortable with the process.

The challenge now is making sure the adjustments and fixes made Monday carry over to the real thing. The difference being, of course, the bright lights of national TV getting turned on and the draft prospects coming on board. That includes minimizing cybersecurity risks.

According to NFL spokesman Brian McCarthy, the league is working closely with its technology partners to ensure a safe operation throughout the event.