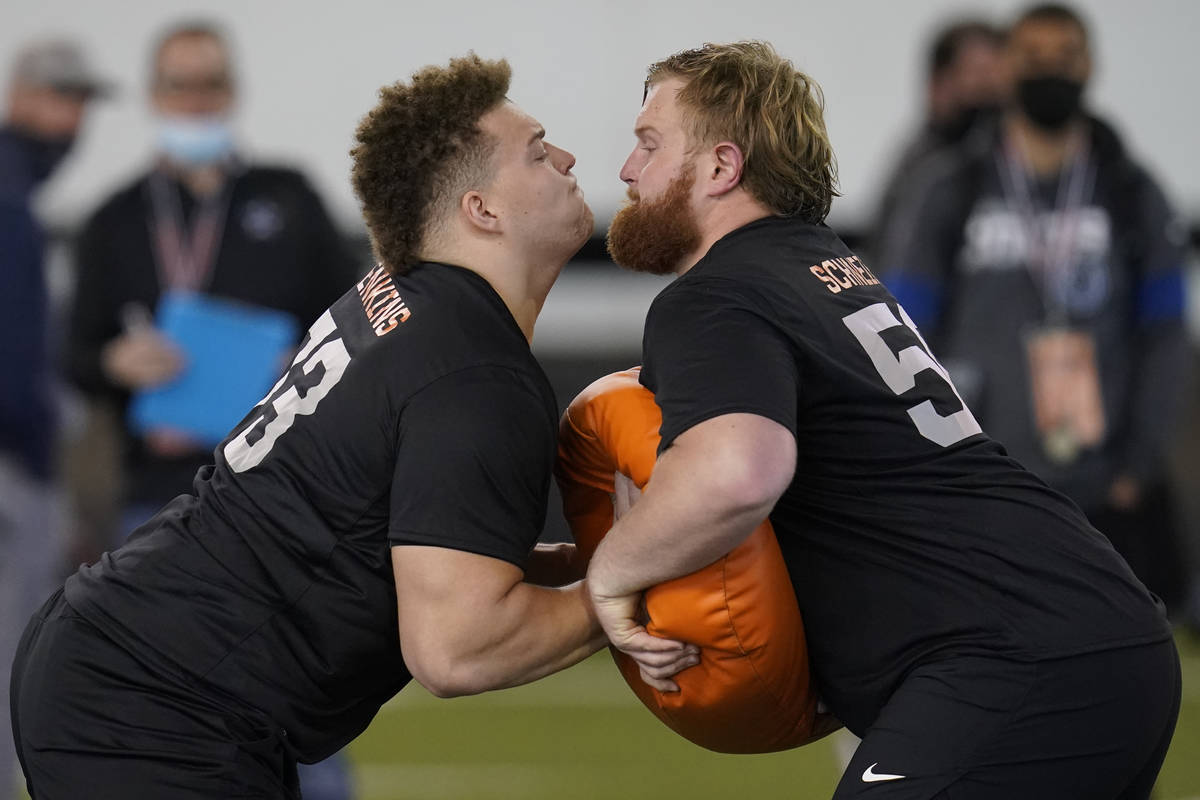 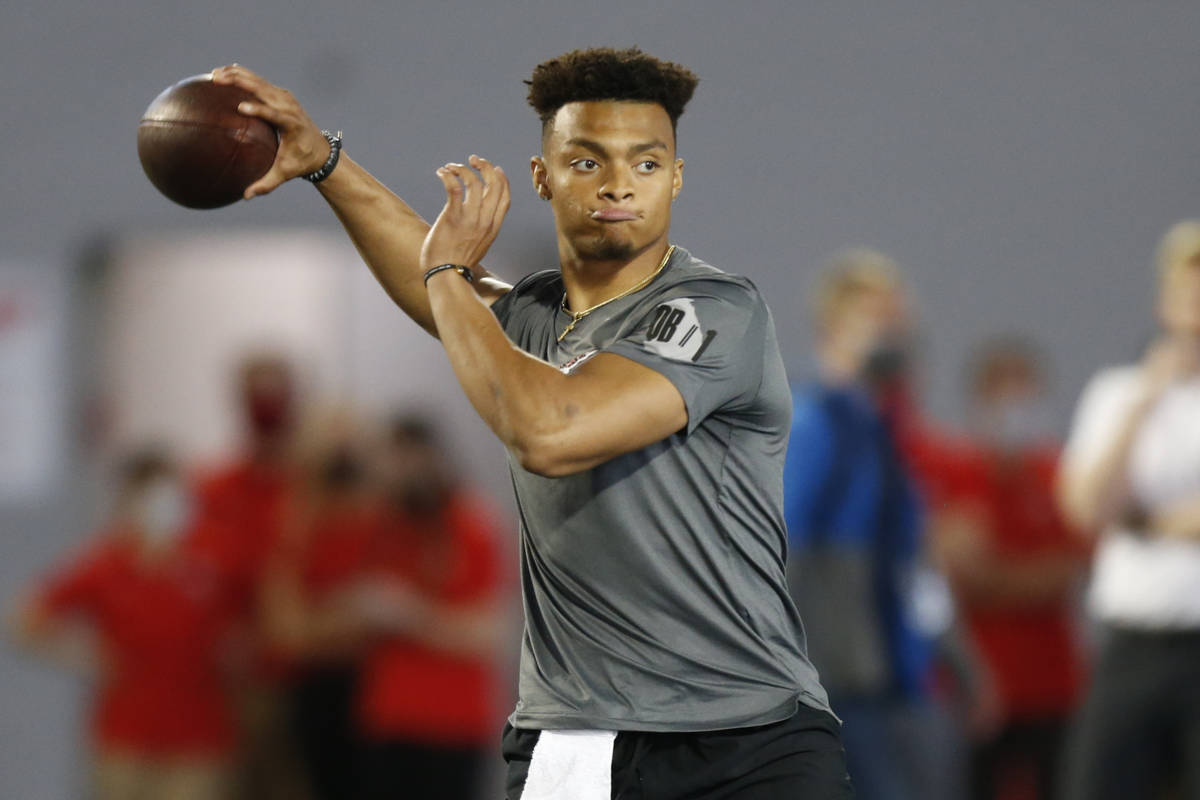 Draft day is drawing closer as NFL teams shore up their draft boards.

The countdown is on to find out how much of the pre-draft information is true and how much is a smoke screen.

After having the Raiders select Alabama defensive tackle Christian Barmore with their 17th pick in the first round, this new version of the Review-Journal’s mock draft has them taking Oklahoma State offensive tackle Tevin Jenkins with that selection.

Check back each week for the latest installment of the mock draft leading up to the final version on April 29th, draft day.

Please note: This draft assumes teams will pick a player at their assigned spot and does not account for any future trades. A player’s previous draft position is in parentheses.

Trevor Lawrence, QB, Clemson (1) — He has been the presumed top pick since about midway through his freshman season, Jacksonville has given no indications to the contrary.

Zach Wilson, QB, BYU (2) — The worst-kept secret in the draft was all but made official when New York traded quarterback Sam Darnold to Carolina and cleared the way for the Wilson era to begin.

From Miami Dolphins via Houston Texans

Justin Fields, QB, Ohio State (4) — This is where it gets interesting. There is little doubt the 49ers traded up to this spot to take a quarterback, but exactly which one is the first unknown of the draft. There is plenty of Mac Jones smoke, but he feels like too safe a choice to surrender so many assets to take. Fields is more of a game-breaker and should flourish in this system.

Kyle Pitts, TE, Florida (11) — The Falcons are in a great position. Their phone will likely be ringing off the hook with trade offers from teams hoping to either select Pitts or one of the remaining quarterbacks. It’s likely they will listen and trade down if they are blown away by an offer. But in this exercise with no trades, they give Matt Ryan another weapon instead of drafting his replacement.

Penei Sewell, OT, Oregon (5) — Joe Burrow may be able to talk his bosses into drafting his college teammate Ja’Marr Chase here. But after watching their franchise quarterback’s rookie season end prematurely due to injury, it may be more prudent to try to protect him.

Ja’Marr Chase, WR, Louisiana State (3) — What a coup for the Miami Dolphins, who were able to trade down three spots through a series of moves and still end up with their choice of wide receivers. They take the best available instead of pairing up Tua Tagovailoa with one of his college teammates. The previous version of this mock draft had them taking Chase at No. 3

DeVonta Smith, WR, Alabama (6) — There used to be plenty of jokes about the Lions drafting a wide receiver in the first round every single year. That approach makes plenty of sense this year. It’s not only a position of need, but one with several potential stars. The Heisman Trophy winner is the choice here.

Rashawn Slater, OT, Northwestern (12) — The Panthers were thought to be in the quarterback sweepstakes. But Carolina traded for Sam Darnold and hope to have filled that position without giving up this pick. Now they can use it to start rebuilding the offensive line.

Trey Lance, QB, North Dakota State (8) — The Broncos don’t seem desperate to replace Drew Lock and aren’t likely to give up additional assets to move up. They will have to make a decision if one or more of the top QB prospects fall to them here, though.

Patrick Surtain II, CB, Alabama (10) — There are reports of owner Jerry Jones being “infatuated” with Pitts. Sure, just about every personnel department likely feels the same. He won’t be around this long, though, so the Cowboys get their pick of elite cornerbacks.

Kwity Paye, Edge, Michigan (14) — The Giants need to find someone who can consistently get to the quarterback. Paye is an interesting case. His sack production is hardly worthy of consideration for a top half of the first round edge rusher. Look out for rising prospect Azeez Ojulari here as well.

Jaylen Waddle, WR, Alabama (7) — This could prove to be quite a coup for the Eagles. Philadelphia essentially traded down from No. 6 and could still get an elite wide receiver to go with an extra first-round pick next year. The Eagles have a collection of talented young pass catchers, but Waddle is the game-breaker they need.

Christian Darrisaw, OT, Virginia Tech (13) — The Chargers believe they hit a home run in the first round last year with quarterback Justin Herbert. Darrisaw will help form the foundation of an offensive line they hope will offer protection for their young star.

Micah Parsons, LB, Penn State (15) — Darrisaw would be a great choice for the Vikings. There may be disappointment in their draft room if he does go earlier. Parsons, however, is a great consolation prize. He is perhaps the best defensive player in the draft.

Mac Jones, QB, Alabama (19) — This could be the start of the Caleb Farley watch. The talented cornerback from Virginia Tech is a top 10 talent with significant injury concerns that could keep teams away from him in the top half of the first round. Could the Patriots be the team to ignore the yellow flags? Perhaps. Instead they stop the slide of Jones and bring him in to develop him as the quarterback of the future.

Jaycee Horn, CB, South Carolina (16) — This is another team that could well take Farley. Instead, the Cardinals go the safe route and take the athletic man corner who will fit their system.

Teven Jenkins, OT, Oklahoma State (20) — The Raiders don’t have to take a tackle even though most mocks seem to believe they do. But Jenkins not only fits a need, he should be able to step right into a starting role and give Las Vegas a bookend tackle to go with Kolton Miller. He only allowed four pressures on 211 pass-blocking snaps last season at Oklahoma State.

Jayson Oweh, Edge, Penn State (21) — His measurables at his pro day look more like a defensive back than a defensive end. Oweh actually ran a sub-4.4 40-yard dash and recorded a 39.5-inch vertical leap.

Caleb Farley, CB, Virginia Tech (9) — The defending division champs have had a solid offseason, filling needs and improving their team, which puts them in a position to roll the dice on what could be a potential grand slam of a draft pick. Washington could also take a look at safety Trevon Moehrig of TCU.

Christian Barmore, DT, Alabama (17) — This isn’t an area of need for the Bears. But with the top offensive tackles and cornerbacks off the board, they grab a disruptive force on the defensive line.

Gregory Rousseau, Edge, Miami (22) — The Colts have agood defensive line that could be great with an edge rusher who also has the ability to play inside. Rousseau, who has started to slip down mock draft boards, fits the bill.

Rashod Bateman, WR, Minnesota (27) — Josh Reynolds was signed to help the losses in the pass-catching corps. But it’s just a one-year deal and A.J. Brown still needs more help. If there were any questions about top-line speed, they were answered with Bateman’s sub 4.4-second 40 at his pro day.

Azeez Ojulari, Edge, Georgia (23) — Jets’ general manager Joe Douglas loves measurables, so he super-high upside again. The same principle could also land them on Miami edge rusher Jaelan Phillips, but Ojulari has fewer question marks. He is also starting to gain steam as a potential top half of the first-round pick and may not be around this long.

Alijah Vera-Tucker, OL, USC — The Steelers need help all along the offensive line and could be in the market for both a guard and a tackle in the draft. Fortunately, Vera-Tucker has proven the ability to play either position and could be a valuable asset for Pittsburgh.

Trevon Moehrig, S, TCU (25) — Urban Meyer knows he has many holes to fill on the roster he inherited for his first NFL head coaching job. He’d probably like to build from the inside out. But after landing Lawrence with the first pick he can secure a quarterback for his defense with his second first-round pick.

Jaelan Phillips, Edge, Miami (30) — He would go much sooner without injury questions, but the Browns have a loaded roster and the ability to take a chance with this pick.

Kadarius Toney, WR, Florida (29) — They need more weapons around Lamar Jackson and he is as dangerous as it gets with the ball in his hands. The same description could apply to Purdue’s Rondale Moore, who would also be a good fit here.

Asante Samuel Jr., Florida State — The Saints need a man-to-man outside cornerback after losing Janoris Jenkins as a cap casualty. Samuel, the son of a four-time Pro Bowl corner, has the pedigree and physical skills to be a star if he can cut down on the over-aggressive penalties without losing the ability to make big plays.

Jeremiah Owusu-Koramoah, Notre Dame (26) — Not really an area of need when you just think of him as an inside linebacker, but he is elite in coverage and can play several positions on passing downs. May just be too good to pass up if he falls.

Carlos Basham Jr., Edge, Wake Forest — Down year in terms of production has him slipping, but this is definitely an area where the BIlls could use an infusion of youth and talent. Big for the position, but brings a strength to push tackles into the backfield.

Samuel Cosmi, OT, Texas (31) — The Super Bowl debacle showed the Chiefs need an infusion of youth and depth on the offensive line, an issue that only got more glaring with the team’s cost-cutting measures to get under the cap.

Rondale Moore, WR, Purdue — This is a luxury pick for the defending champions. They add a dynamic playmaker from the slot to a team returning its entire starting lineup. Could replace Antonio Brown or be a long-term option should they lose Chris Godwin after the season.