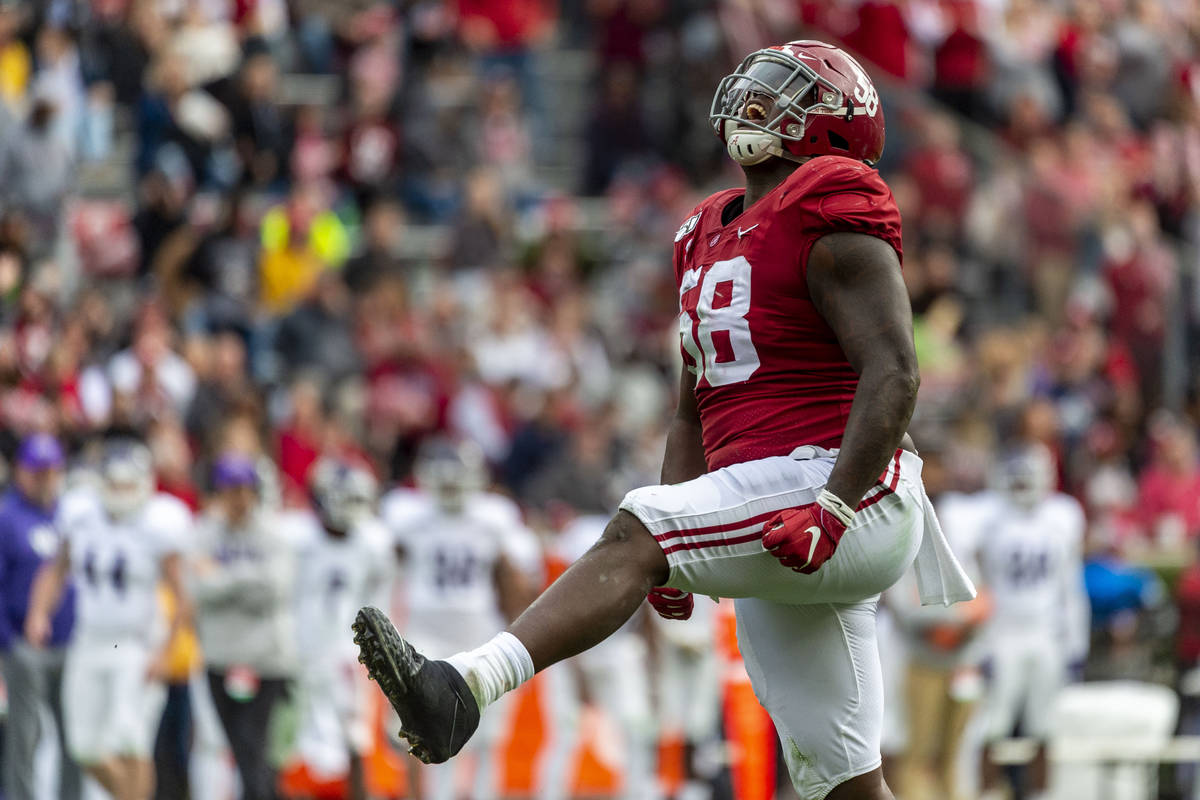 Alabama defensive lineman Christian Barmore (58) celebrates a sack against Western Carolina during the first half of an NCAA college football game, Saturday, Nov. 23, 2019, in Tuscaloosa, Ala. (AP Photo/Vasha Hunt)

Free agency begins on Wednesday and fans around the NFL are excited about what impact players their teams may add. But, rest assured, teams are still hard at work preparing for the draft that begins on April 29th.

So it’s a good time for the Review-Journal Mock Draft 2.0. Again, this one will proceed without factoring in trades, even though there will be several.

In this mock draft, with the 19th pick, the Raiders take Alabama defensive tackle Christian Barmore.

A player’s previous draft position is in parentheses.

No surprise at the top of the draft. Lawrence has been the presumptive top pick for several years. The Jaguars just so happen to be a perfect fit.

It’s looking more and more like Wilson is the likely pick at No. 2. Whether it’s the Jets that make that pick is the bigger question. The Jets could be involved in the DeShaun Watson sweepstakes or even keep Sam Darnold and trade down to add picks.

This is another team that could get involved in the trade market. If Miami stays here, it could use a playmaker on offense. The Dolphins take the best one on the board instead of reuniting Tua Tagovailoa with one of his college teammates, DeVonta Smith or Jaylen Waddle.

Matt Ryan is probably good enough to keep the Falcons competitive for another couple years, so they opt to go the route of the Packers in 2020 and select the quarterback of the future.

Cincinnati may run to the podium to turn in this pick if Sewell is still on the board. He is the top tackle on the board and provides Joe Burrow some badly needed protection.

The Heisman Trophy winner’s productivity should far outweigh questions about his physique and durability. Philadelphia is in desperate need of a playmaking wide receiver.

Detroit already had a need for a wide receiver. Then it chose not to use the franchise tag on Kenny Golladay. Waddle is the last of the three truly elite players in a loaded group of wideouts in this draft.

This seems like a perfect landing spot for Lance, who could be a part of a rebuilding franchise and learn under the tutelage of wunderkind offensive coordinator Joe Brady.

Denver would probably like to be involved in the quarterback sweepstakes and could be a player in the trade market. With the top four off the board, they have their choice of corners.

The Cowboys take the other top corner to fill a position of need. If Surtain were just slightly faster, he’d be in the discussion as a top three pick.

Don’t be distracted by the listed position. Pitts is just a big receiver who can line up on the line of scrimmage occasionally. He may well be the best prospect in this draft.

The 49ers are working toward bringing back offensive tackle Trent Williams, which makes Slater’s versatility a plus. He could play guard for now, but move to tackle if the 49ers don’t re-sign Williams.

Slater would be an ideal choice for a Chargers team with needs all across the line. Darrisaw is a good consolation prize after Slater is already taken in this scenario.

Minnesota needs help on the offensive line. But Mike Zimmer has mentioned his team’s need to get to the passer several times since the end of the season, so this would make sense.

The best defensive prospect falls to Bill Belichick, who would no doubt spend the rest of the offseason dreaming of ways to use an elite run-stopping linebacker who can also get to the quarterback. For a better idea of his impact, notice what happened to the Penn State defense in 2020 when he opted out of the season.

Arizona makes the choice to go for need with this pick. It would be intriguing to see them take Alabama defensive tackle Christian Barmore to pair with Chandler Jones and J.J. Watt for what could be one of the more feared defensive fronts in the league.

It’s no secret how much the braintrust in Henderson loves players from elite college programs, particularly those who have dominated in big spots. Barmore was a wrecking ball during the college playoffs, spending nearly as much time in the offensive backfield as the opposing quarterbacks.

Drafting running backs in the first round has become sacrilege in the NFL, but Miami has the luxury of two first-round picks and a glaring need for playmakers on offense.

This isn’t the kind of first-round quarterback who’s going to inspire fans to swarm the box office, but Jones consistently puts the ball in the right place and could be an ideal fit for a team that will win games with its defense.

It might be difficult to forecast what the Bears’ needs will be by the draft, considering they still don’t know who will play quarterback. No matter who that ends up being, Chicago is desperate for improvement up front.

Keep a close eye on Penn State’s March 25 pro day. There are rumors Oweh could run a 4.3-second 40. If he does, watch for Oweh’s stock to rise quickly.

Rousseau may end up being a case study on the impact of players who decided to opt out of this past college football season. He was a potential top-five selection last season, but has really only played one year of college football.

Running backs Najee Harris and Javonte Williams are possibilities for the Jets with their second first-round pick of the draft. Instead they go for a rising prospect at a more impactful position.

Here’s another team that could consider Harris and Williams. Vera-Tucker is another versatile lineman who could play inside or outside, giving a Pittsburgh team with several holes to fill up front additional options.

Meyer has said he wants to rebuild the secondary after solidifying the defensive line, but it may be tough to pass up a playmaker like Moehrig who could make the entire secondary better.

The Browns are almost certain to target their defense. They may have gone with Moehrig, but with him gone, they take an undersized linebacker who can cover like a safety.

The question of who is the fourth-best wide receiver in this draft is intriguing. It may just come down to what type of player teams value. Kadarius Toney is an explosive playmaker with the ball in his hands and may make a lot of sense for the Ravens’ offense, but Bateman is the highest rated on my board at this spot.

Drew Brees has officially retired to signify a new era for a Saints team with plenty of holes to fill despite a nightmarish salary cap situation. Bolton gives them a defensive playmaker who should be able to play right away.

Linebacker Zaven Collins might make more sense here, but Toney would be such a great weapon because of what he can do with the ball in his hands. Matt LaFleur and Aaron Rodgers will figure out plenty of ways to utilize him.

Buffalo spent the last few weeks figuring out how to keep key players from becoming free agents, avoiding expected gaps on the offensive line and at linebacker. That allows the Bills the luxury of taking a shot on an edge rusher with high upside who also has yellow flags about his injury history that could keep him from going in the top 20.

A lack of depth on the offensive line may be one of the biggest reasons Kansas City never really had a chance to win a second consecutive Super Bowl. That was before the Chiefs released both starting tackles.

This could change quite a bit based on how free agency plays out. For now, Collins is the best defensive player available and could be a prudent pick even though veteran Lavonte David just signed a new deal. Collins would be a great understudy to him while also seeing situational duty right away.