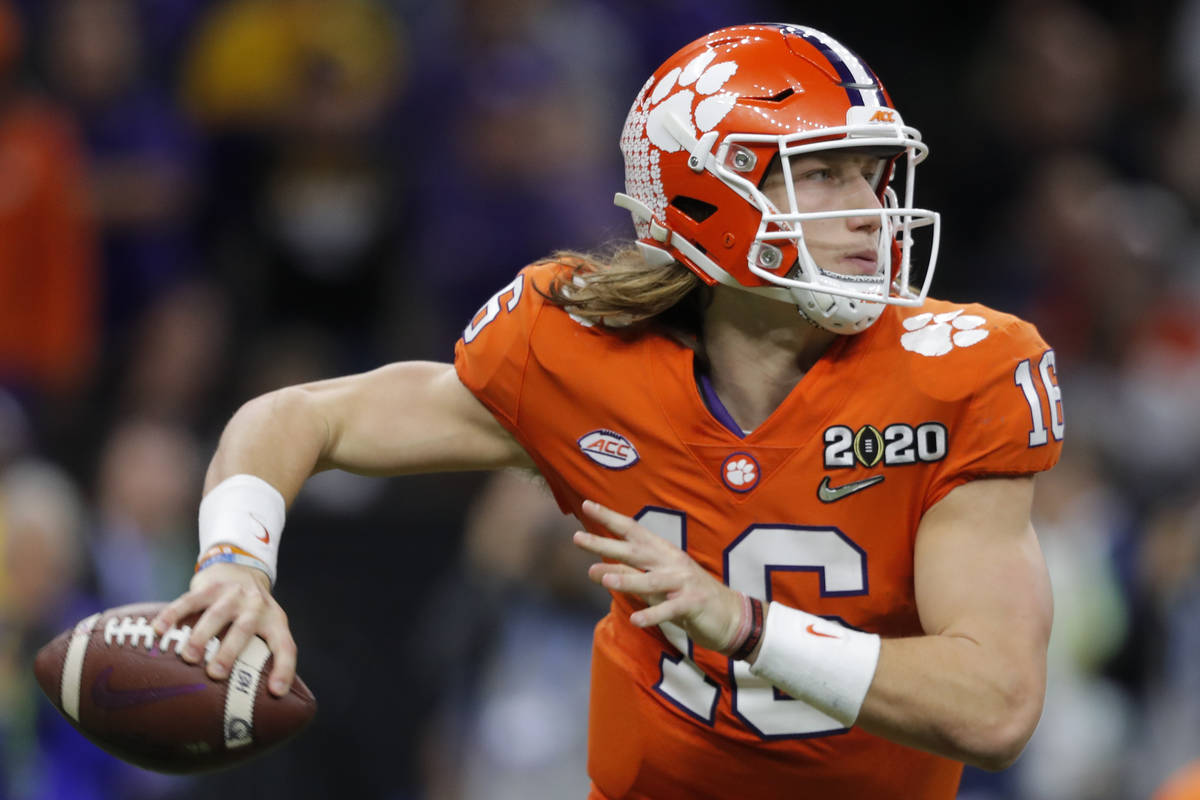 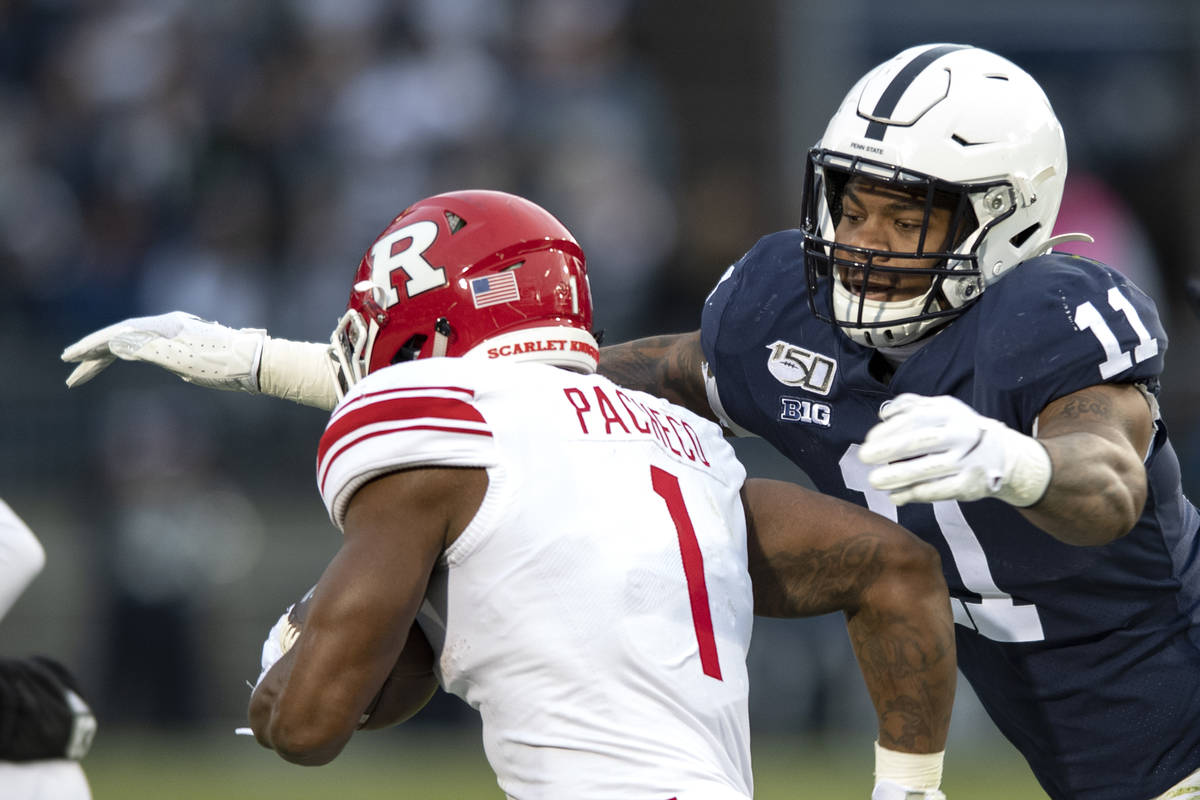 It’s that time of year again, time to start scouring the internet for information about the NFL draft, which begins on April 29.

Of course, free agency comes first. This year comes with the wild card of a reduced salary cap that should make for some unexpected cuts and capable veteran players looking for jobs.

That process will change a lot about what needs teams have heading into the draft. But why be patient. Let’s take a look at how things could play out in the first round of the draft.

Worth noting: The Raiders take Penn State linebacker Micah Parsons, and the number of quarterbacks chosen on Day One could be a surprise:

Urban Meyer takes a franchise quarterback in his first stint as an NFL head coach.

The best wide receiver in the draft took the college season off to prepare for the draft and should be impressive in workouts. Of course, this pick could be Houston’s.

If Miami is serious about building around quarterback Tua Tagovailoa, pairing him with his friend and former college teammate would be a good idea. Smith’s productivity this season at Alabama erased any concerns about his slender frame.

There might be questions about his size and durability. The tape doesn’t lie. Wilson can make just about any throw and has the athleticism to make plays at the next level. He will have time to learn under Matt Ryan, who figures to be back next season. Pundits will enjoy debating who should be the second quarterback off the board. There really shouldn’t be much question.

Philadelphia would love to get one of the top receivers and would likely grab either Chase or Smith if they’re on the board. But Farley could be a star and fills a need opposite Darius Slay.

Detroit could use help in several different areas, but none of their returning starters at receiver are under contract for 2021. New quarterback Jared Goff is going to need somebody to throw to this season.

Carolina has shown an interest in upgrading at quarterback and still might make a move to acquire a veteran. This could be a strong alternative, however. Lane could learn for a season under a great tutor in Teddy Bridgewater.

Denver gave Drew Lock plenty of weapons in last year’s draft only to watch him fail to take a significant step forward in 2020. It may be time to start thinking about moving on. Fields could be the answer. This would make four quarterbacks in the top nine picks.

Dallas needs help in the secondary. Surtain could be the most NFL-ready cornerback prospect in the draft. His dad was a three-time Pro Bowler in an 11-year career.

The good news for the team that lands Paye is that he is effective against the run and can be used to rush the passer and even occasionally can drop in space. The better news is he is still somewhat raw and has plenty of room for improvement.

Rousseau has the tools to be a dominant edge defender, with an ability to rush from the inside or outside. This would be a perfect landing spot for him to join forces with Nick Bosa on a team with a need that could become even more glaring if Dee Ford isn’t back.

Los Angeles should invest heavily in protecting Justin Herbert. Slater is an ideal candidate. He should be able to play either tackle or guard. The Chargers have several unsettled positions, so an elite talent with such versatility could be a steal.

Minnesota has not selected an edge defender in the first round since Erasmus James in 2005. It might be time to try again. His ability to get to the passer is far ahead of his effectiveness against the run. But the Vikings need to do a better job of generating a pass rush.

Bill Belichick hasn’t done a great job drafting skill position players in recent years. But Pitts looks to be as close to a sure thing as you’re going to find. He runs routes more like a receiver. Most SEC cornerbacks had an impossible task trying to defend him.

This appears to be an area of need for Arizona. Several of their key players at cornerback are due to hit free agency, and it’s unclear who they will be able to bring back. Horn is a big, physical corner who should be able to excel in press coverage.

The Raiders need to add defensive players on all levels. Parsons is the best available at this point in the draft. He is particularly good against the pass both as a rusher and in coverage, a skill set the Raiders will need should they not be able to retain Nicholas Morrow.

Miami already brought in one of Tagovailoa’s old teammates with their first pick, so why not another? Harris gives them another weapon on an offense in need of playmakers. He can run past or through tacklers while also being a good receiver out of the backfield.

Washington needs to address the position this offseason and will likely try to do so through a trade or free agency. If they aren’t able to do that , they will have to turn to the draft. Jones isn’t very exciting and this might be a reach, but he is NFL-ready compared to some of the other prospects.

Another first-round prospect who played tackle this season after spending 2019 at guard and could play either spot in the NFL. That could be helpful for a Chicago team that struggled to block anyone this season and will almost certainly invest in a quarterback through a trade or free agency.

He started as a freshman and has only gotten better every season in the ACC. Darrisaw should be able to start right away and has the upside to become a franchise cornerstone. That would be good news for a team losing exactly that in the retired Anthony Castonzo.

Tennessee could have several areas of need depending on how the next couple months play out, particularly in regard to their pending free agents. Oweh is the kind of disruptive pass rusher who could help the rest of their defense, though he might be a bit of a specialist at first.

Again, the Jets would rather have Houston make this pick and have Deshaun Watson in New York. If they are still picking here, it means Sam Darnold is getting another chance. So here is another weapon for an offense desperate to find playmakers.

There figures to be quite a variance of opinion on Cosmi. But he is one of the most athletic tackles in this year’s class and has grown into his 6-foot-7 frame by adding 50 pounds during his time in college. Some team is going to really like him. The Steelers look like a good fit.

Meyer inherits a team with a whole lot of needs, but perhaps none are as glaring as the middle of the defensive line. Onwuzurike gives them an anchor who is a relentless force over the ball.

Cleveland needs playmakers on defense. Barmore has the potential to be just that at the next level. He didn’t always stand out on film early in the year, but flip on a replay of the national championship game and it won’t take long to see Barmore make his way to the backfield.

Lamar Jackson took a bit of a step backward from his MVP season, but at least part of that can be blamed on a lack of playmakers in the wide receiving corps. Toney can help with that while also giving them an option in the return and running games. He is dangerous with the ball in his hands in space.

Sean Payton insists he’s ready to make Taysom Hill his starting quarterback, it would be wise to have other options should Drew Brees in fact retire and Jameis Winston is signed by another team. The biggest questions about Trask are his arm strength and mobility, which sound an awful lot like the knocks on Brees.

Green Bay’s offensive line depth was exposed in the NFC championship game and needs to be addressed. Mayfield’s biggest knock is that he plays on the right side, but that actually works well for a Green Bay team with David Bakhtiari on the left side.

Much of their strategy on draft day will revolve around what they do on the offensive line and at linebacker with their own free agents. Here, the bet is that linebacker Matt Milano signs elsewhere. Owusu-Koramoah would be a good replacement should that happen.

This is not just a reaction to the disastrous performance by the offensive line in the Super Bowl. But the Chiefs do need to start thinking about depth and the future. Tackles Eric Fisher and Mitchell Schwartz are entering the final year of their contracts, and Fisher will be rehabbing from an Achilles injury.

Shaq Barrett is set to hit free agency and is in for a massive payday. Barrett and the Bucs have expressed mutual interest in doing a long-term deal. If that doesn’t happen, he’ll need to be replaced. Ojulari is starting to garner hype as a potential riser on draft boards.