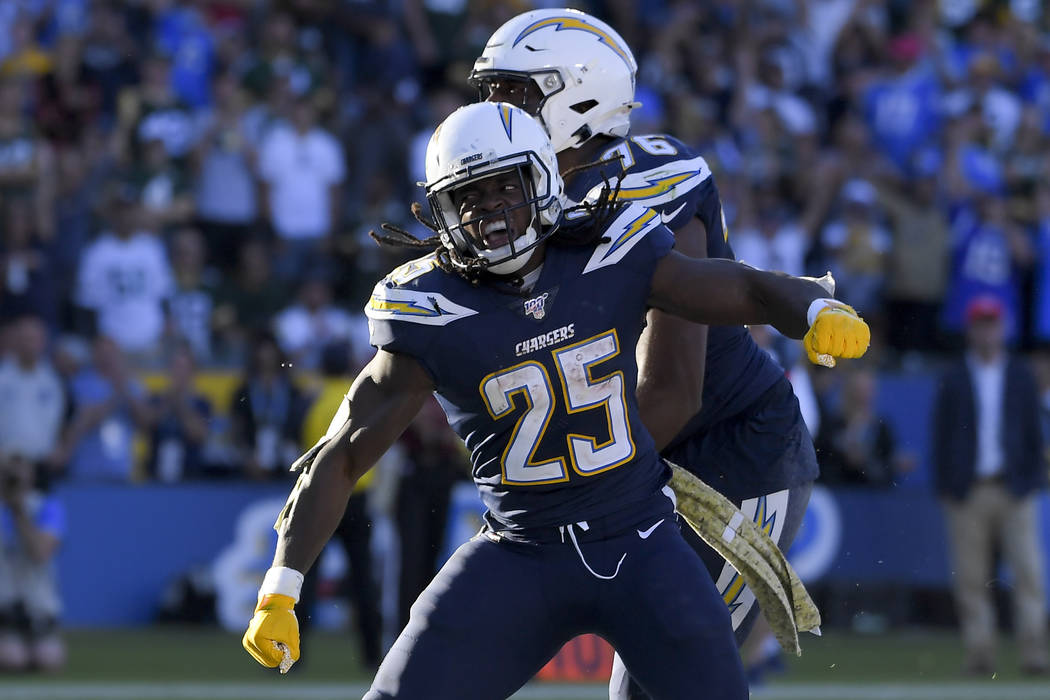 Los Angeles Chargers running back Melvin Gordon celebrates after scoring against the Green Bay Packers during the second half of an NFL football game Sunday, Nov. 3, 2019, in Carson, Calif. (AP Photo/Mark J. Terrill)

COSTA MESA, Calif. — Los Angeles Chargers owner Dean Spanos is emphatically denying reports that his franchise and the NFL are looking into relocating the team to London.

“We’re not going to London. We’re not going anywhere. We’re playing in Los Angeles,” Spanos said Tuesday. “This is our home, and this is where we are planning to be for a long (expletive) time. Period.”

The Athletic reported Monday night that the Chargers have been discussed by the league as a possible option to relocate to London because of the team’s struggles to build a fan base in Los Angeles. The Chargers are in their third season in LA after Spanos moved the team from its longtime San Diego home, and they play in the league’s smallest stadium — the 27,000-seat Dignity Health Sports Park in Carson. The Chargers will move next year to the new SoFi Stadium in Inglewood, which they will share with the Rams.

The NFL also released a statement saying there is no substance to the report about a possible Chargers move.

The statement read: “No consideration has been given to the Chargers playing anywhere other than Los Angeles at the new stadium in Hollywood Park next season and beyond. There have been no discussions of any kind between the NFL and the Chargers regarding moving to London. Both our office and the Chargers are entirely focused on the success of the team in Los Angeles.”

Coach Anthony Lynn said there wasn’t anything to the report, and quarterback Philip Rivers had no comment Tuesday. The Chargers (4-5) travel to Oakland (4-4) on Thursday night.