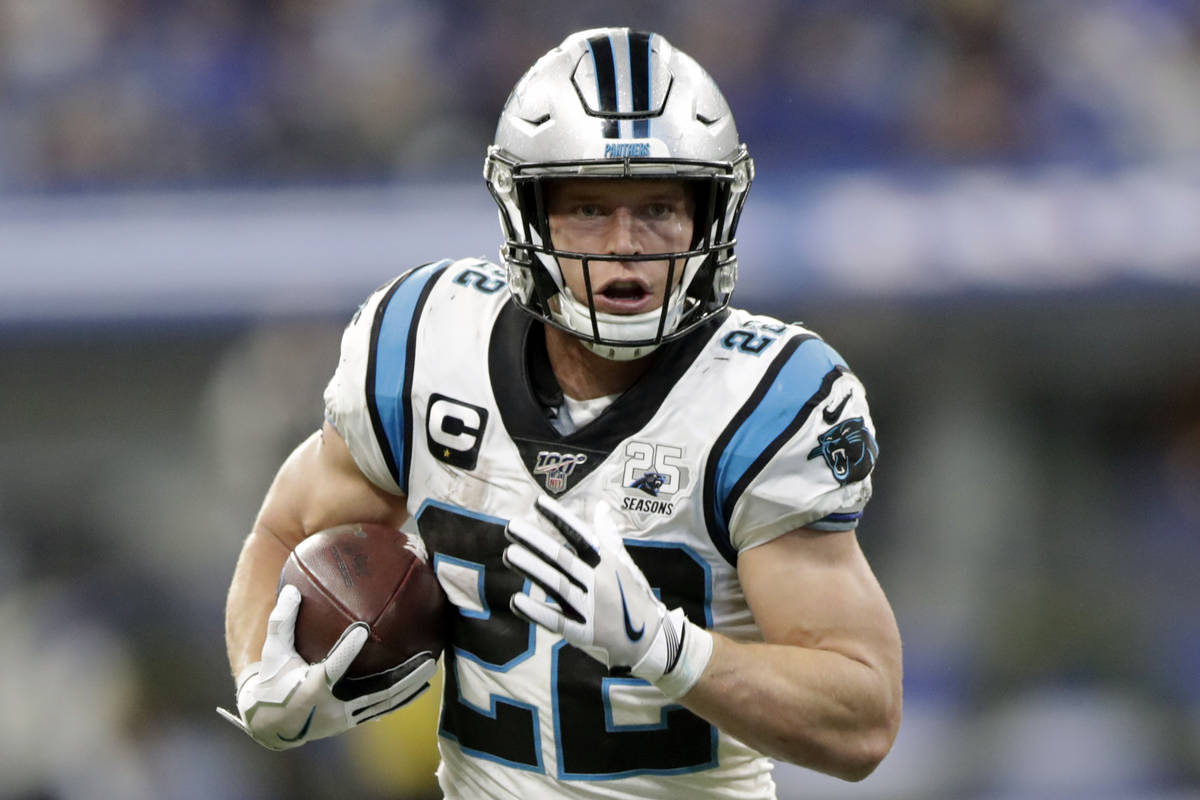 FILE - In this Dec. 22, 2019, file photo, Carolina Panthers' Christian McCaffrey runs during the second half of an NFL football game against the Indianapolis Colts, in Indianapolis. McCaffrey's versatility and superb statistics helped him to a rare double: The Carolina Panthers running back has made The Associated Press NFL All-Pro Team at two positions. (AP Photo/Michael Conroy, File) 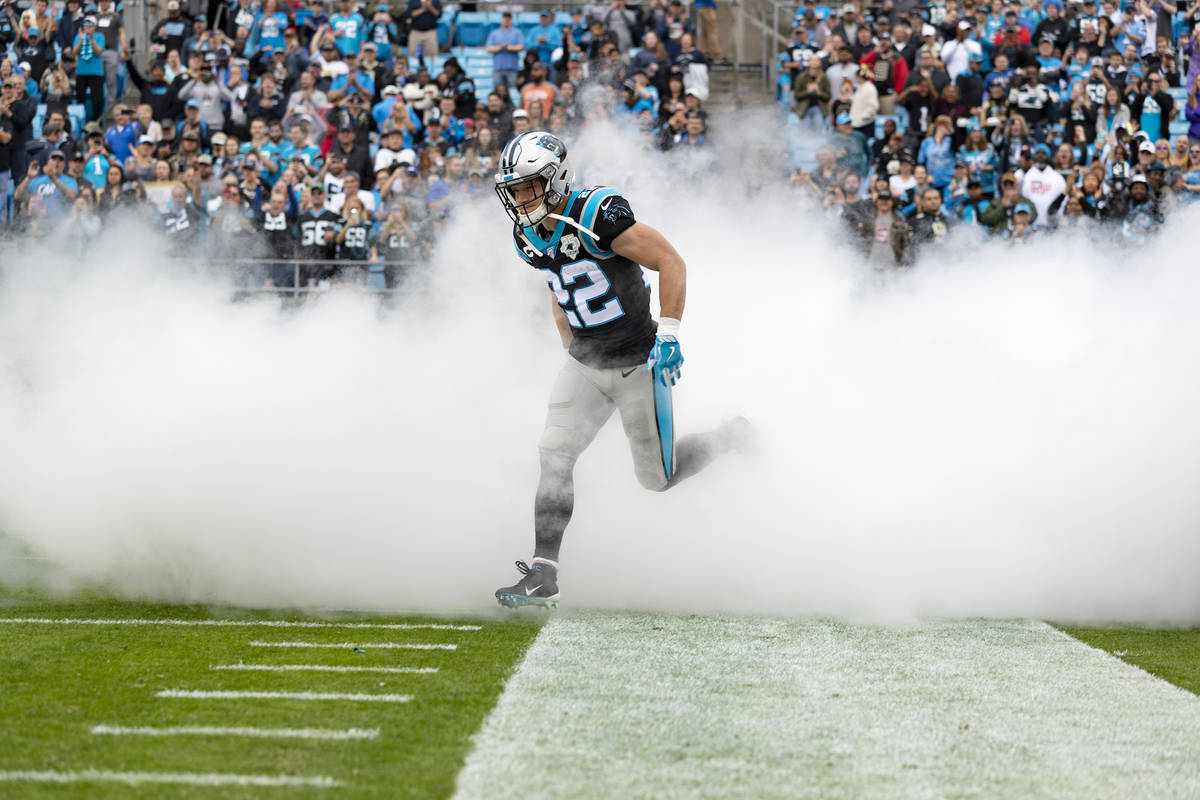 Carolina Panthers running back Christian McCaffrey (22) running onto the field during an NFL game in Charlotte, N.C. on Sunday, Dec. 29, 2019. (Chris Keane/AP Images for Panini)

The talent is obvious. The speed. The agility. The elusiveness. The acceleration.

But there’s something even more impressive about Carolina Panthers running back Christian McCaffrey. Something that buoys and sharpens those skills.

“Focus,” said McCaffrey’s speed coach, Brian Kula, with whom he trains during the offseason. “He has an uncanny ability to focus in his training. In his approach to the game. In his diet, nutrition, body care. You name it. He has maybe the best focus of any human I’ve ever been around.”

At the age of 24, McCaffrey begins his fourth NFL season at 10 a.m. Sunday against the Raiders with lofty goals — and the richest contract awarded to a running back in the league’s 100-year history. Last season, the 5-foot-11-inch, 205-pound Colorado native rushed for 1,387 yards, made 116 receptions for 1,005 yards and scored 19 touchdowns.

The receptions are a record for a running back. The 2,392 yards from scrimmage were the third-most for a player in a single season, behind only former All-Pro running backs Chris Johnson and Marshall Faulk.

“The man can do anything,” said Las Vegas linebacker Cory Littleton, who played against McCaffrey last season with the Los Angeles Rams. “He runs that offense.”

McCaffrey’s new head coach, Matt Rhule, referred to him as a “perfectionist,” noting that he seeks to understand the subtleties and nuances of each and every route he runs. And not just down to the yard, either. Down to the inch.

“Our young players have no excuse to say ‘Hey, I don’t know what it takes,’” Rhule said, “because you watch the way he does things, it’s really easy to see what it takes to be great.”

Commitment to the craft

McCaffrey’s background is not exactly a secret at this point.

His father, Ed, was a former Pro Bowl wide receiver who earned three Super Bowl rings and had 7,422 receiving yards and 55 touchdown receptions in 13 NFL seasons.

His mother, Lisa, played soccer at Stanford, too, giving McCaffrey a unique predisposition for sport.

His talent began to manifest itself at Valor Christian High School in Highlands Ranch, Colorado, where he dazzled on the football field in the fall, the basketball court in the winter and the track in the spring.

“He just always, always, always kept improving, kept working,” said Rod Sherman, McCaffrey’s offensive coordinator and head coach at Valor Christian. “He just raised the level of everyone around him, whether that was in the weight room. Whether that was on the field. That’s just uncanny for a young man as a 14- or 15-year-old freshman.”

That work ethic — or focus, as Kula says — helped McCaffrey become an explosive impact player as an underclassmen, capable of scoring at any time from any spot on the field.

Stanford coach David Shaw remembered watching McCaffrey’s film the first time and comparing its contents to a Charlie Chaplin movie, “where it looks like he’s in fast motion and everyone is else in slow motion.” Naturally, he wanted to know more and tasked a couple of his assistants with watching McCaffrey in person.

“They called me at halftime … and said ‘Coach, that film didn’t even do him justice,’” Shaw said. “What you couldn’t see on the film that you saw live and in person was his aggression, his competitiveness. … He gets angry when somebody tackles him. He doesn’t think anybody should ever tackle him. And he doesn’t get angry at the guy who tackles him. He gets angry at himself. He has such a drive to be great.”

And a drive that extends beyond the confines of competition into the crevices of his personal life.

“He had a routine on game day, what he ate, take a nap, different things that were fairly unusual for a high school-aged kid,” Kula said. “When the rest of (his peers) were chasing a girl around school or whatever, Christian had his game face on … and showed that discipline from an early age.”

McCaffrey committed to Stanford in May 2013, and Shaw subsequently started developing a vision for the player who would soon alter his program. He had studied and analyzed Faulk, the 2000 NFL MVP, Pro Football Hall of Fame enshrinee and standard for versatility at the tailback position.

“It’s almost unfair to say to a high school senior that you’re comparing to him to Hall of Fame, All-Pro guys,” Shaw said. But as we know now, those comparisons weren’t unwarranted.

Shaw limited McCaffrey’s playing time during his freshman season of 2014, knowing he wanted the 18-year-old to add more weight to his lean, muscular frame for the role he would assume in 2015 and 2016.

Two years, 4,577 scrimmage yards and 31 touchdowns later, McCaffrey solidified himself as perhaps the best player in college football — and the No. 8 pick in the 2017 NFL draft.

“It’s rare when you have a guy on your team when your own team is in awe in him,” Shaw said. “When he walked out the door to go to the NFL, what he left was a standard. A standard that very few can reach, but at least a lot of those guys got to see it.”

McCaffrey has improved in each of his three NFL seasons, evolving from a souped-up scatback as a rookie into a punishing runner with elite receiver skills in 2018 and 2019. There’s not a hole he can’t find, a route he can’t run or a block he won’t make.

The proof is in the production. His peers voted him as the league’s sixth-best player in the NFL’s annual top 100.

McCaffrey didn’t publicly divulge his goals for the 2020 season but told reporters at beginning of training camp that his preparation includes “monthly goals in the weight room or on the track or on the field.”

“I’ll focus on a couple of things here and there that I really want to get better at each day,” McCaffrey added. “It’s really nonstop.”

“Anybody who wants to be great at anything needs to study Christian McCaffrey,” Shaw said. “He shows a passion for the game. He shows a passion for his teammates every single day. That, to me, is what as a coach and as a father is what you want. You want the greatest guys and the hardest competitors to have the most success so you can point to the other guys and say, ‘Do it like that guy.’”