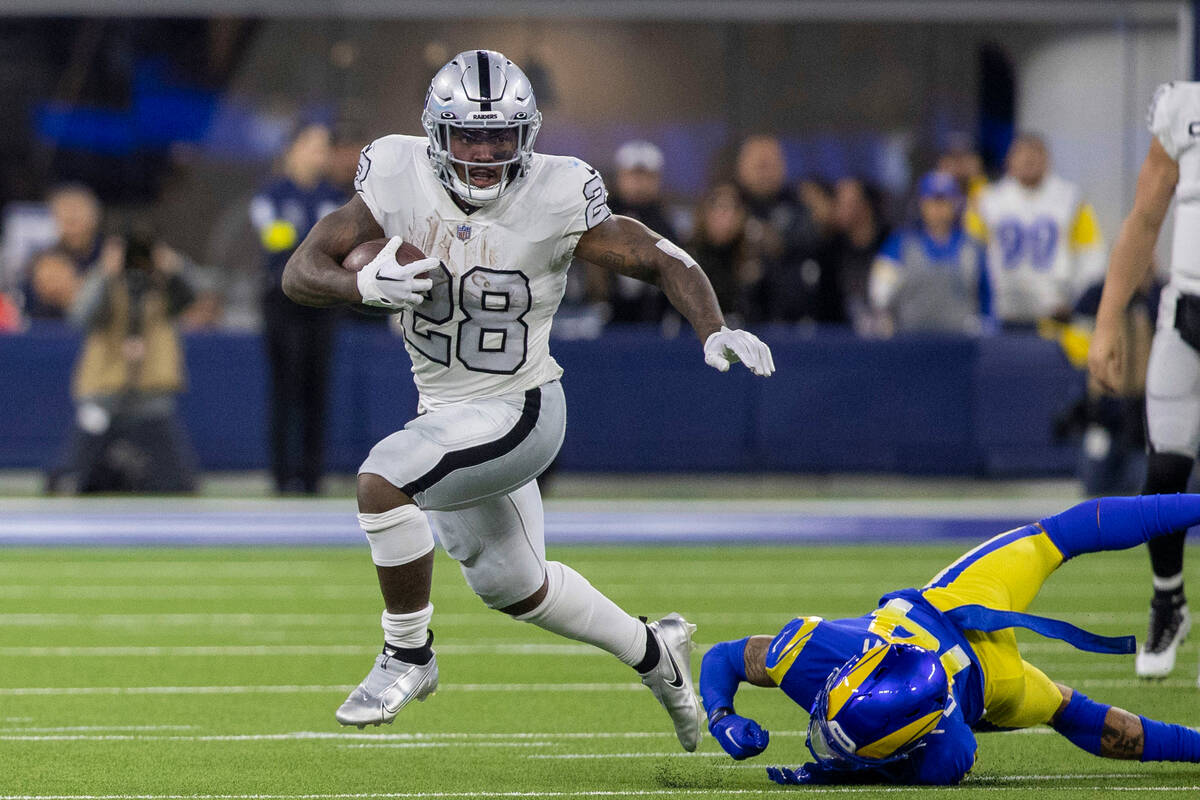 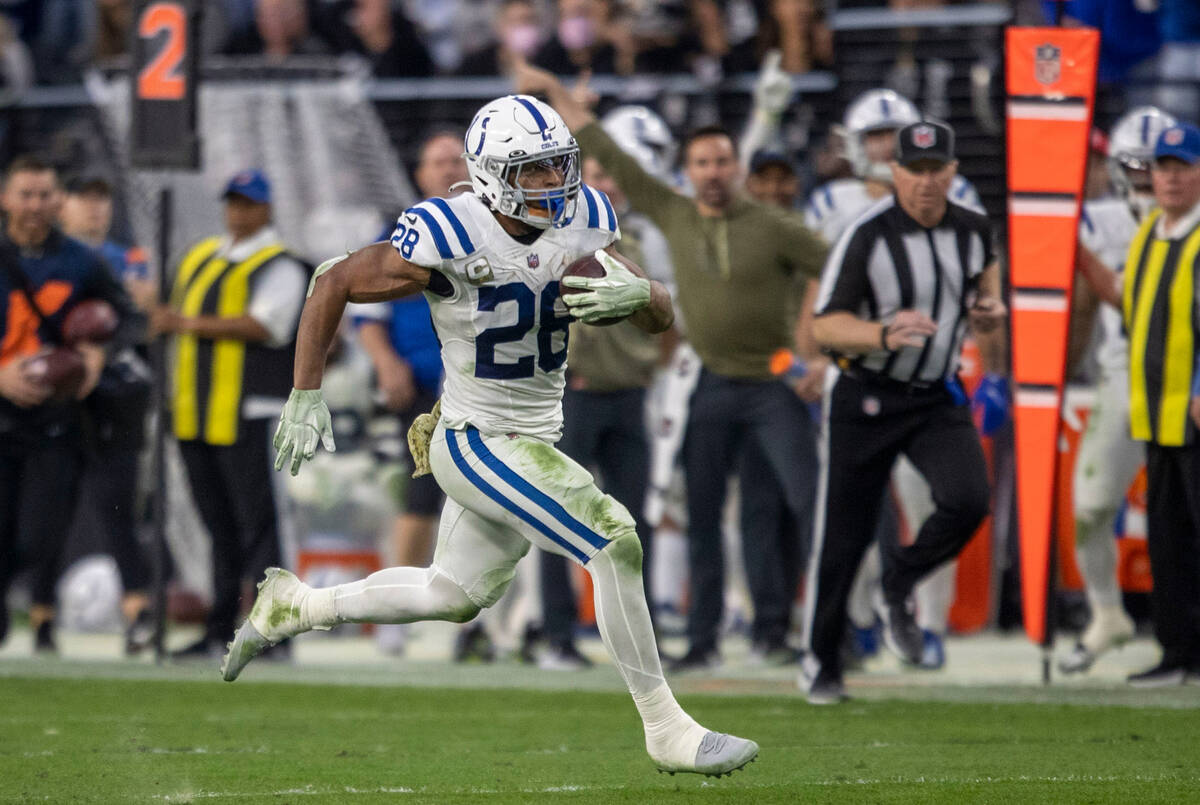 Indianapolis Colts running back Jonathan Taylor (28) runs into Raiders territory during the second half of an NFL game at Allegiant Stadium on Sunday, Nov. 13, 2022, in Las Vegas. (Heidi Fang/Las Vegas Review-Journal) @HeidiFang 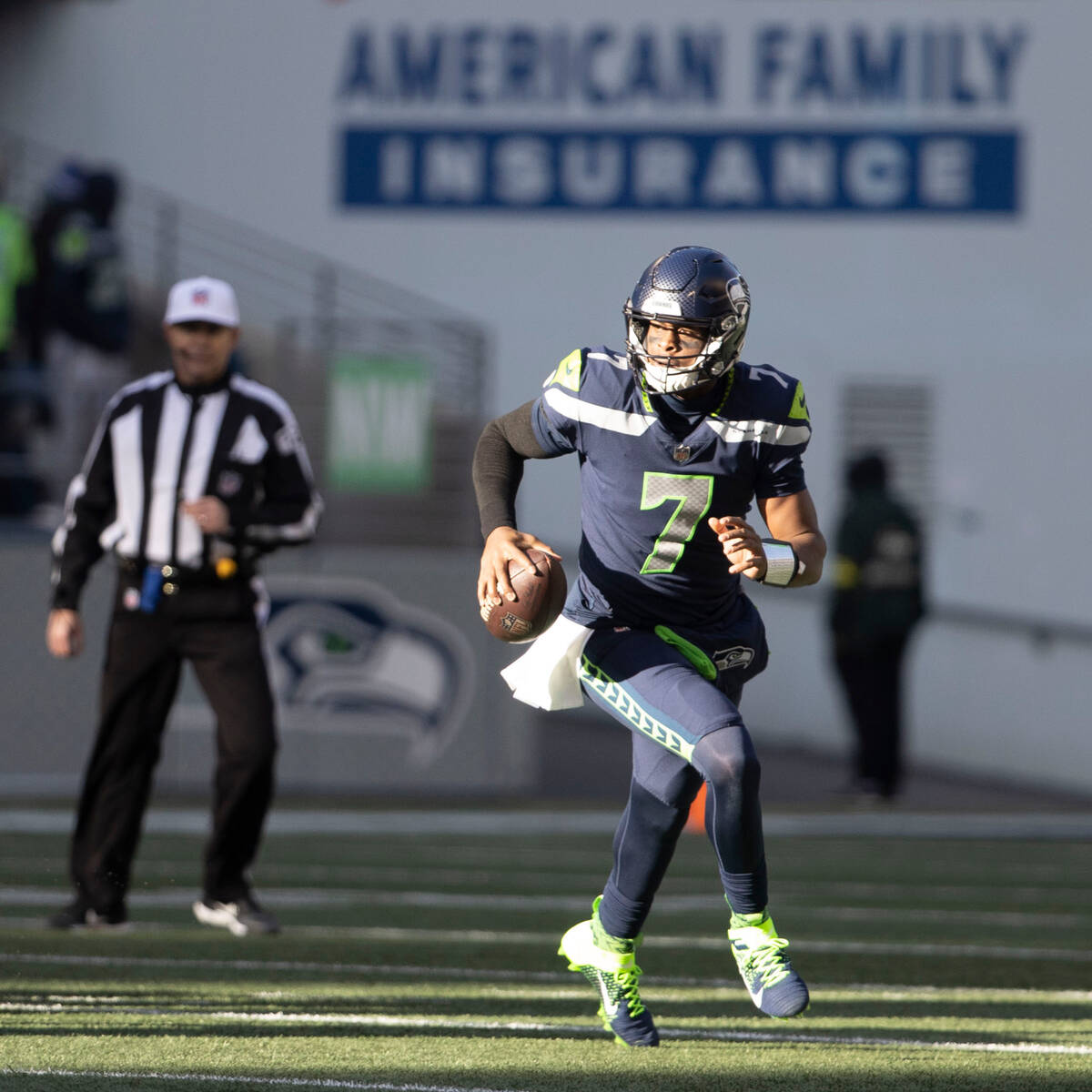 Seattle Seahawks quarterback Geno Smith (7) runs with the football during the first half of an NFL game against the Raiders at Lumen Field on Sunday, Nov. 27, 2022, in Seattle. (Heidi Fang/Las Vegas Review-Journal) @HeidiFang 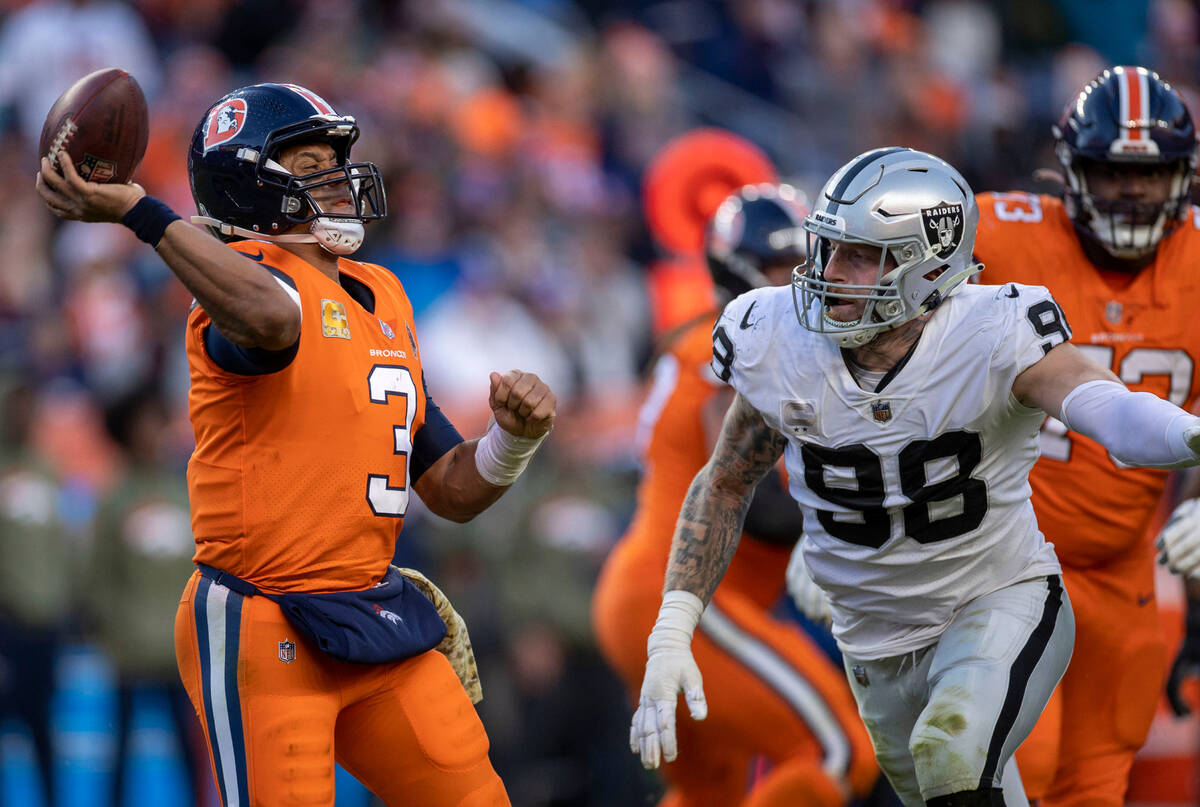 There probably aren’t many fantasy football managers who selected No. 1 in their drafts who are sitting atop the standings.

Jonathan Taylor, the consensus top player in fantasy football, has been largely disappointing.

It’s not that Taylor has been bad, but he has battled injury, the offensive line has struggled and the Colts have been disappointing as a team.

All of that has left Taylor as the No. 19 running back in fantasy football. That’s going to leave teams who selected him at the top of the draft and then had to wait until the end of the second round for their next player in a difficult position.

There is hope he could close the season strong for the fantasy playoffs after the Colts have their bye this week, but his struggles might have left his managers on the outside looking in at the postseason.

That’s probably not true of those who took a chance on Raiders star Josh Jacobs.

During draft season, there were all sorts of concerns about Jacobs’ fantasy stock, not because of his immense talent but because of how first-year coach Josh McDaniels has handled running backs.

The so-called Patriots way of taking a committee approach to the backfield, combined with the Raiders selecting two running backs in the NFL draft, had Jacobs sliding down the board. When he was called into duty in the first preseason game, his stock plunged.

But it didn’t take long for him to eliminate those concerns.

Jacobs is having a historic season on the field and has been the unquestioned No. 1 running back in fantasy football, particularly with his increased usage in the passing game.

He’s averaging 18.5 points per week, nearly two points ahead of No. 2 Derrick Henry. Not bad for a player who was the 22nd running back off the board on average and the 48th player overall. That equates to the end of the fourth round in a typical 12-team league.

Finding a gem such as Jacobs in that area of the draft gives managers a huge advantage on the rest of the league in the same way a disappointing season such as Taylor’s makes it difficult to have success.

Here are some other overachievers and underachievers for the fantasy season with most leagues about to start the playoffs:

Geno Smith, QB, Seahawks — This will become the go-to example for years to come cited by those who advocate waiting for late in the draft to take a quarterback.

Smith was the 35th quarterback off the board on average in draft season. There are 32 teams in the league. He is ranked seventh in fantasy points per game and is still unrostered in nearly 15 percent of leagues.

Justin Fields, QB, Bears — The fifth-ranked quarterback in fantasy football was the 17th quarterback off the board in drafts.

A slow start suggested he might have another disappointing season, but he was unlocked and is likely to be a highly coveted player next season.

Tony Pollard, RB, Cowboys — He is seventh in the league at 14.3 fantasy points per game and a rock solid RB1 even though he was being drafted as a fringe flex player.

Teammate Ezekiel Elliott was being selected 50 spots ahead of him.

Jamaal Williams, RB, Lions — The NFL’s touchdown leader was barely an afterthought for most drafters.

He was the 52nd running back and 145th player off the board.

Amon-Ra St. Brown, WR, Lions — Not everyone bought into his breakout 2021 campaign, as evidenced by his No. 24 ADP among receivers.

He has rewarded those that did as the eighth-ranked receiver this season.

Christian Kirk, WR, Jaguars — He barely cracked the top 100 players in ADP and was the No. 40 receiver, but has averaged 10.3 fantasy points per game and is a top 12 player at the position.

Taysom Hill, TE, Saints — The fact that he’s the No. 2 tight end in total fantasy points and No. 3 in fantasy points per game is more an indictment of the position than anything else.

But he went undrafted in most leagues.

Russell Wilson, QB, Broncos — It’s baffling how unproductive he has been as a fantasy quarterback and in terms of real-life production.

He was drafted in the top 10 among quarterbacks but is almost unusable.

Alvin Kamara, RB, Saints — Most of the concerns about Kamara before the season centered on his pending legal issues, but instead the problem has been inconsistency.

He has finished in the top 20 among running backs once in the past seven weeks, which was against the Raiders.

Deebo Samuel, WR, 49ers — Samuel emerged as a fantasy darling last season largely because of his usage in the run game. That’s been all but eliminated with the arrival of Christian McCaffrey. Samuel doesn’t draw enough targets, particularly in the red zone, to justify his top seven draft position among receivers.

Kyle Pitts, TE, Falcons — There might not have been a more frustrating player in fantasy football.

Pitts burst onto the scene last season with one of the best rookie seasons of any tight end in history and added some much-needed excitement to the position.

He was going off the board early in the third round of most drafts. Then the Falcons stopped throwing him the ball even before he got hurt and was shut down.

He’s tied for 16th in fantasy points per game. One of the most fascinating things to monitor this offseason is where the ultra-talented Pitts goes in drafts next season.