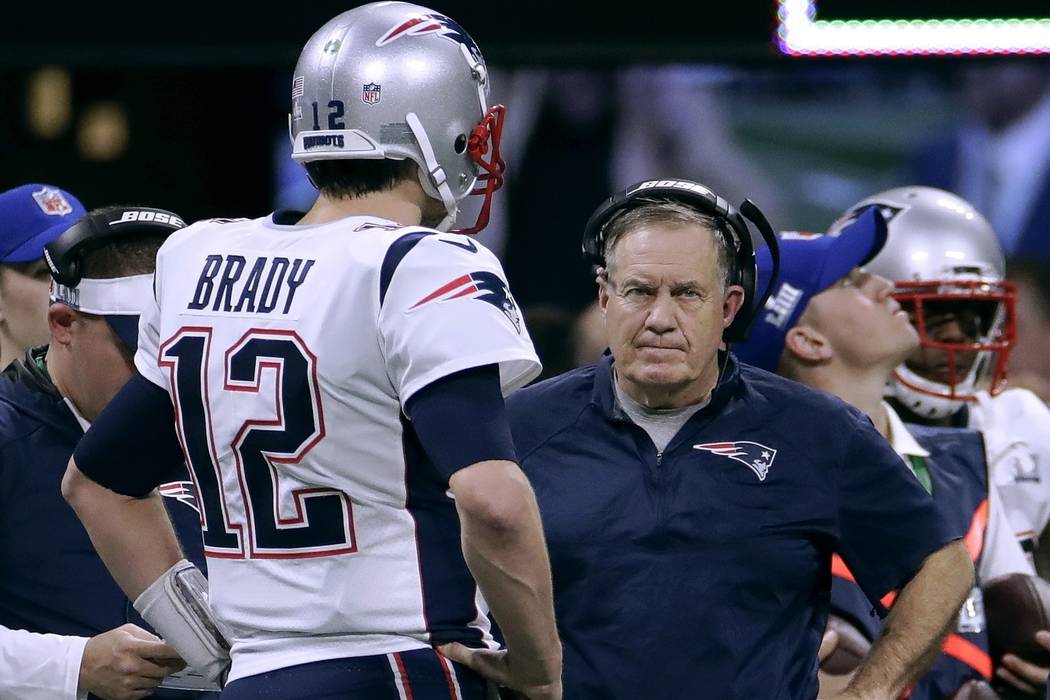 The New England Patriots came for perfection once, and came up 2 minutes, 42 seconds short of immortality.

They’re coming for it again. And they might just get it this time.

The Patriots won’t come out and say it, but there’s a sense of unfinished business for Bill Belichick and Tom Brady when it comes to matching the 1972 Dolphins’ perfect season. And this could be their last chance at it.

Brady, 42, is selling his house in the Boston area and designed his latest contract so that it will void after this season. At that point, he could retire, sign with another team as a free agent, or re-sign with the Patriots.

Brady has gone in recent years from sounding determined to playing until he’s 45 to admitting he’s not sure what the future holds.

“That is the great part for me, I don’t know,” Brady said during his weekly appearance on WEEI’s “Greg Hill Show.” “I think that has been a unique situation that I have been in because I think when you commit to a team for a certain amount of years, you kind feel the responsibility to always fulfill the contract.

“For me, it’s been good because I am just taking it day-by-day and I am enjoying what I have. I don’t know what the future holds and the great part is for me, football at this point is all borrowed time.”

With Brady possibly moving on after this season, this could be Belichick’s last chance as well. He’s 67, but those around him don’t see any signs of him slowing down. A win against the Cleveland Browns on Sunday will be the 300th of his career (268 in the regular season, 31 in the playoffs). Belichick would break Don Shula’s NFL-record 347 total wins in the 2023 season. There’s little love lost between Belichick and Shula, who has been critical of Belichick in the past.

Some of the roster decisions Belichick has made this season have seemed out of character. Instead of releasing some veteran defenders in favor of younger and cheaper talent, Belichick kept all the veterans and the result has been a deep and talented group. He didn’t adjust the contracts of aging players, when that has been routine in the past.

The Patriots have also pushed more and more cap money into the future to benefit the present club — something they never did in the past. And the quick marriage with receiver Antonio Brown seemed to be the type of risky move designed to make a team as formidable as possible. That move didn’t work out, as Brown had to be released for his off-field issues. But the team added another weapon this week in former Falcons receiver Mohamed Sanu.

The results couldn’t be more impressive. The 2007 Patriots were the last team to run roughshod through the league, as they compiled a plus-159 point differential in the first seven games. These Patriots have bettered that, outscoring opponents by 175 points this season.

New England, which has allowed just 48 points so for this season, is on pace to yield 110 in 16 games. The 2000 Baltimore Ravens, which have the record with 165 points allowed for a 16-game season, allowed 75 points through seven games.

But the Patriots have faced the league’s easiest schedule to this point, according to FootballOutsiders.com. It gets a bit tougher from this point, as their strength of schedule ranks 23rd.

After facing the 2-4 Browns, the Patriots face a five-game run that will be their most difficult of the season: at Baltimore (5-2), at Philadelphia (3-4), Dallas (4-3), at Houston (4-3) and Kansas City (5-2) in a rematch of the thrilling AFC Championship game.

The toughest challenge may be the Ravens in the Sunday night game Nov. 4. The Ravens are on a bye this week, so they’ll be rested and well-prepared. New offensive coordinator Greg Roman has a good track record against the Patriots — he’s beaten them twice in five outings, once each in the same role with the 49ers and Bills, and two of his three losses were by one score.

If anyone can design a plan to navigate New England’s suffocating defense, it’s Roman with quarterback Lamar Jackson at his disposal with an extra week to prepare. Baltimore coach John Harbaugh is also no stranger to knocking off New England, having beaten the Patriots three times, including two playoff victories.

If the Patriots survive that game and another meeting with Patrick Mahomes and Andy Reid on Dec. 8, they could very well be playing in another Super Bowl with an unblemished mark — in the home of the Dolphins, where Shula once coached.

The Patriots let immortality slip through their fingers once. You’d be a fool to bet against them if they get another, final chance at it.