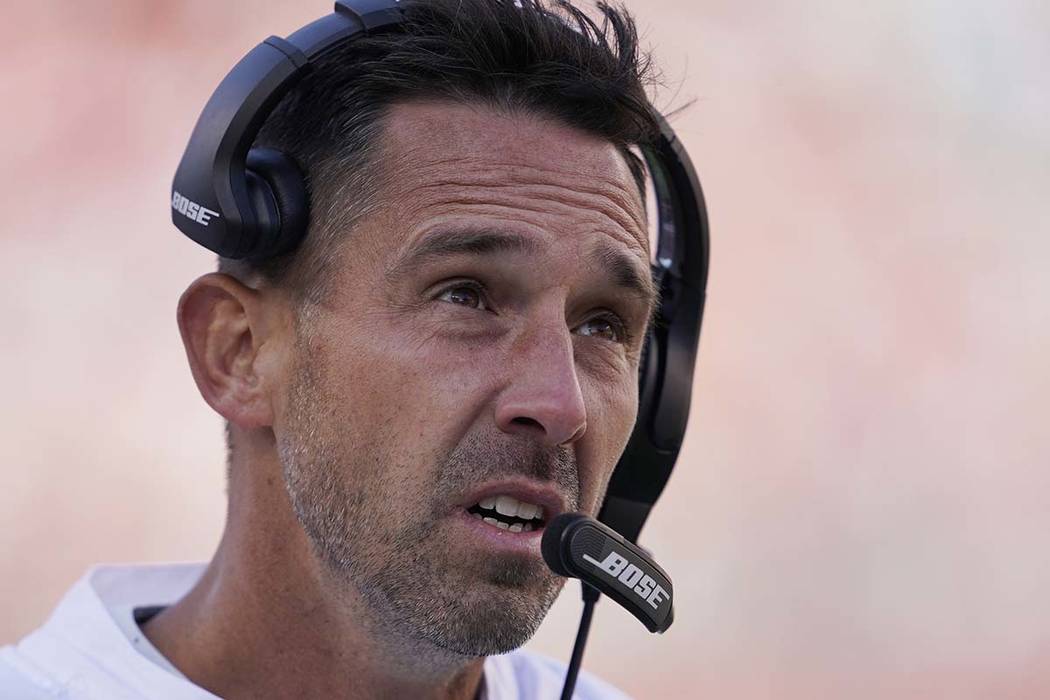 San Francisco 49ers head coach Kyle Shanahan stands on the sidelines during the second half of an NFL football game against the Carolina Panthers in Santa Clara, Calif., Sunday, Oct. 27, 2019. (AP Photo/Tony Avelar) 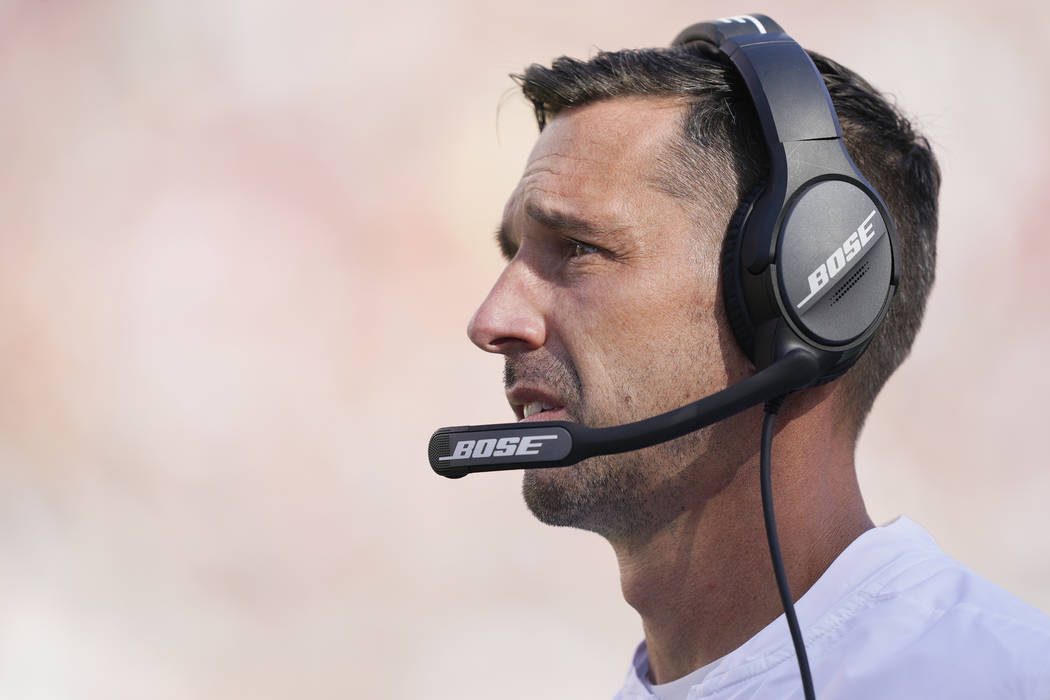 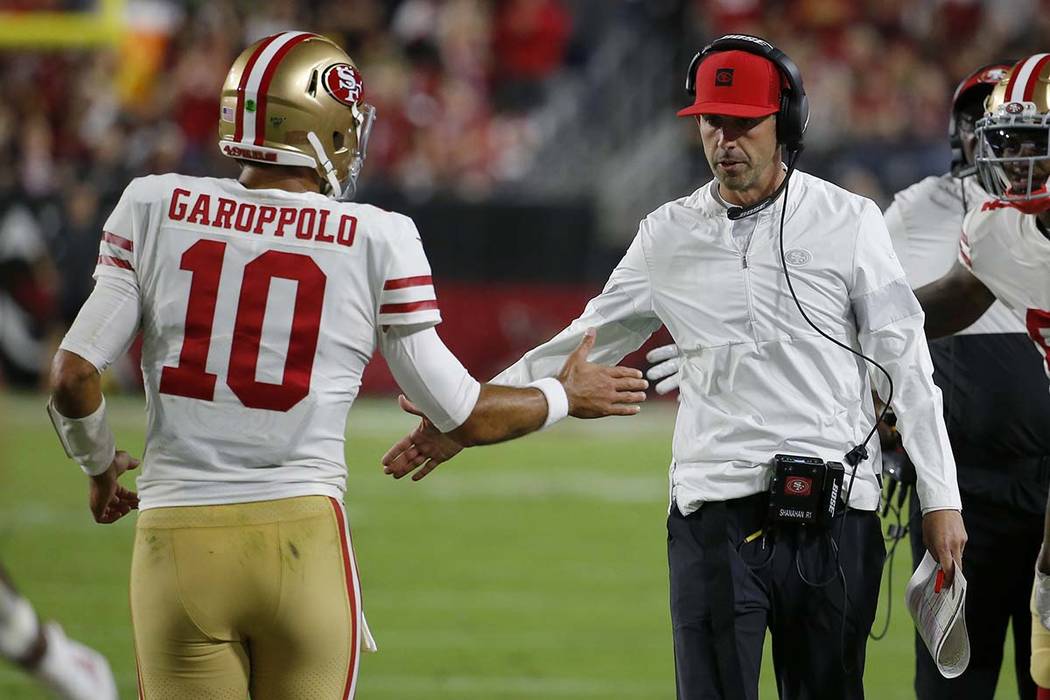 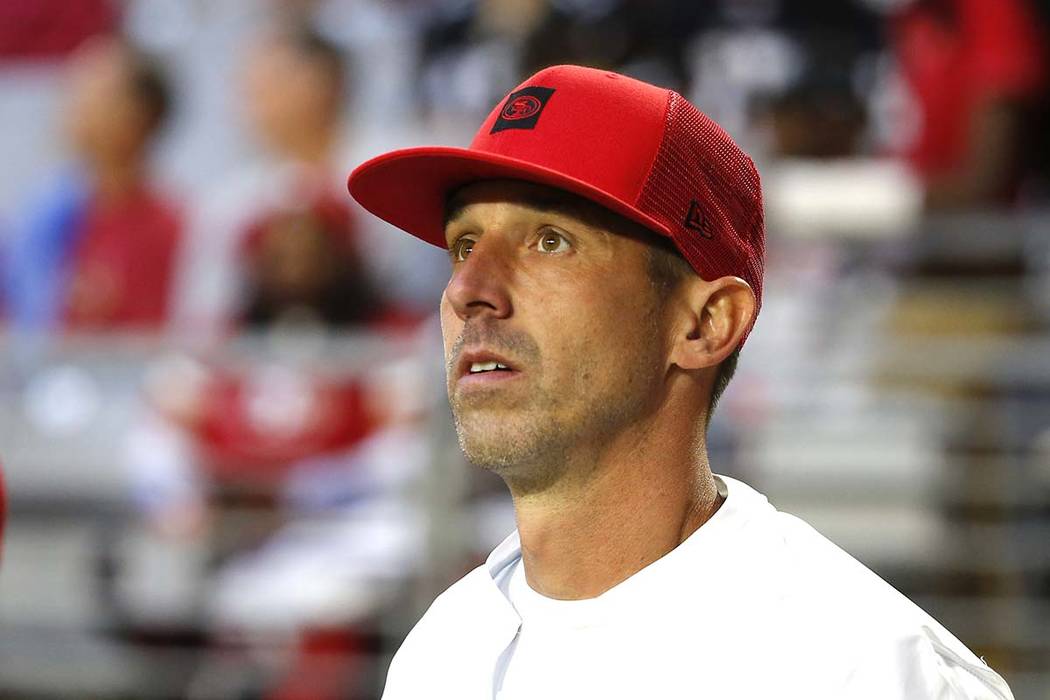 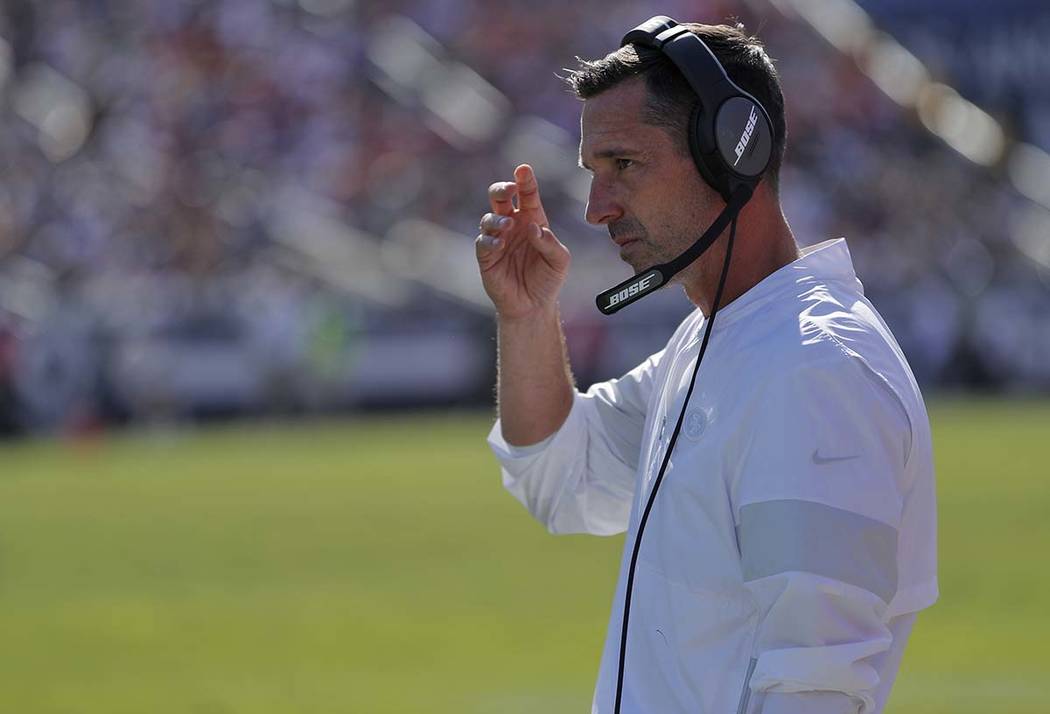 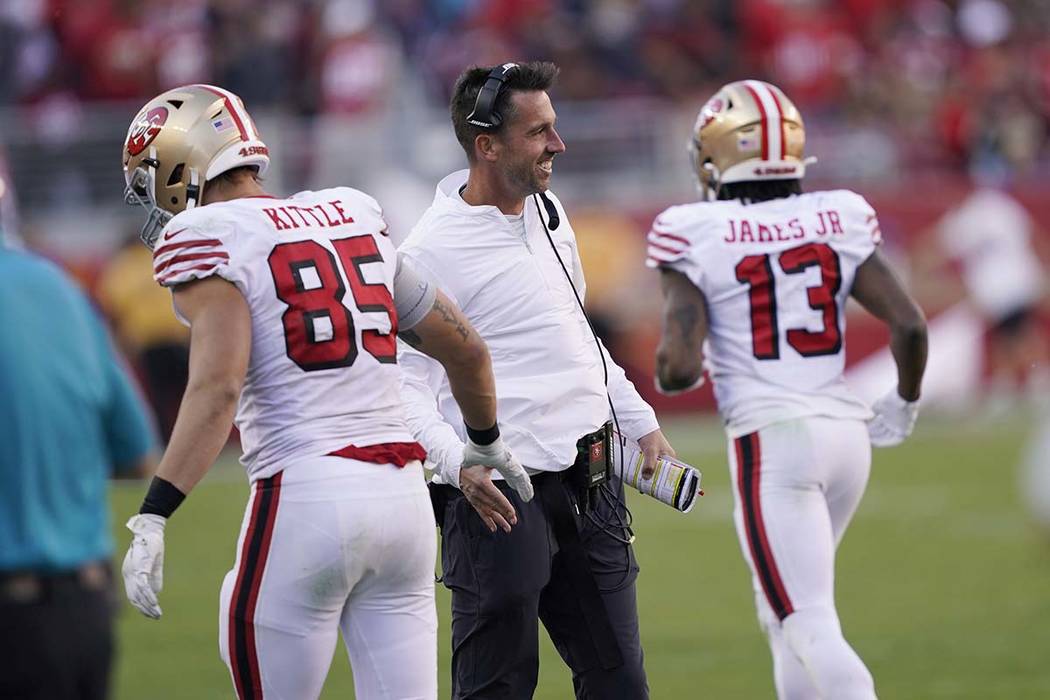 The phone rang in Chris Simms’ apartment at the University of Texas and the voice on the other end was familiar and, as usual, intense.

The game of choice, as you would expect among a group of college football players, was Madden Football. For most, getting ready for such a matchup might include being hopped up on Mountain Dew and, possibly, having a plan of attack.

failed against the go-with-the-flow Simms, Shanahan couldn’t hide his disbelief and anger.

“That doesn’t make sense!” Shanahan would shout as the game progressed. “That play should work against that defense!”

Simms could only chuckle.

Shanahan plays the game for real now and, unlike those late-night meetings with Simms, it’s working out exactly as he planned.

In his third season as head coach of the 49ers, the 39-year-old wunderkind son of two-time Super Bowl-winning coach Mike Shanahan has his team as the lone undefeated team left in the NFL as 8-0 heading into Monday night’s NFC West showdown with the Seahawks (7-2).

To those who have known Kyle Shanahan best over the years, no one is surprised. Even those who had questions about his qualifications due to his father didn’t take long to be won over.

Former NFL quarterback Sage Rosenfels was in first year with the Texans when Shanahan was hired as receivers coach. Houston’s head coach at the time, Gary Kubiak, had been Mike Shanahan’s right-hand man for years with the Broncos.

“I thought, ‘Here we go, we have Kubiak hiring Mike Shanahan’s son. We know how this is going to go,’ ” Rosenfels said.

After not crossing paths much with Shanahan that first season, Rosenfels was in the same room as him when Shanahan was promoted to quarterbacks coach in ’07 and was blown away.

“I learned the most football from him that year and the following year (when Shanahan was offensive coordinator) than I learned from anybody at any point in my career,” said Rosenfels, who played for six teams in his nine-year career. “So that 2007 year, I knew he was the real deal.

“Somehow, he made me a decent NFL quarterback — I never had as much success (6-4 as a Texans starter) or understood the game as well before or since. That was all him. He related to players so well, whether it was (wide receivers) Andre Johnson or Kevin Walter or the quarterbacks, he really had an ability to relate to players and was very likable. More than anything, though, he knew how to dissect a defense and how to adjust. He knew exactly what to do if the defense did ‘X.’ ”

People see the name Shanahan and automatically think nepotism. But that couldn’t be further from the truth. Kyle broke into the NFL as a quality control coach under Jon Gruden in Tampa Bay, and was with Kubiak for four years before working under his father with the Redskins. Then he was the offensive coordinator for the Browns and Falcons before getting his shot with the 49ers.

That time with the Buccaneers was essential to the coach Shanahan is today. Simms was a quarterback with the Bucs at the time, so he was always among the last players to leave the facility on most nights. Almost like clockwork, Simms would walk by a meeting room where the defensive coaches were going over film. There would be Shanahan, sitting on the floor in the back of the room taking notes.

“He’d be listening to Monte Kiffin and Rod Marinelli and Mike Tomlin and Gus Bradley,” Simms said. “He really took an understanding to knowing defenses and really knowing the detailed rules of the defense. I think that’s where Kyle really separates himself from the rest of coaches. He knows if they’re in this coverage and they do this as an offense, then the defense is going to counter with this. That’s when he cracks the code more often than not.

“Kyle has done it through picking the brains and studying these defenses, and he’s not afraid to take chances and create new plays and just invent something that nobody has done on the offensive side of the ball. Some people will say, ‘This doesn’t make sense.’ And he’ll say, ‘Well, this is going to attack their rules and I don’t care.’ Then it becomes a staple play for everybody in football. That’s where Kyle is very, very special.”

Belichick for a new generation?

He’s similar to Patriots coach Bill Belichick in this way. It’s often been said that Belichick could be his own offensive or defensive coordinator because he understands both so well. Shanahan could be the Belichick for a new generation, if The Hoodie listened to Lil Wayne and talked trash to his players about his on-field exploits as a Longhorns receiver.

“He would always tell everyone he could still run a few routes on them and show some of his film, which is always a good laugh,” said Colts quarterback Brian Hoyer, who played for Shanahan with the Browns and 49ers. “He’s young, he’s relatable, but he’s also driven toward success. He kind of walks that line where he’s young and a player’s coach, but he’s also not going to be easy on anyone in the same sense.”

Hoyer has called Shanahan the Belichick of offense because both coaches are known to be so singularly focused on the task at hand.

“He was always so consumed with the game-planning and stuff that you’d be walking down the hallway and you’d be like, ‘Hey Kyle,’ and he would be like in his own world,” said Hoyer. “He’d look up and be like, ‘Oh, hey,’ and then keep walking with his head back down. It was almost like the way Bill walks around the building. You can always tell he’s thinking about what the game plan is or what he’s got to do for the team, whatever it might be.”

Shanahan demonstrated this inquisitiveness about the game at an early age. Ed McCaffrey first encountered a 14-year-old Shanahan when he was a ballboy in 1994 with the 49ers, when Mike Shanahan was offensive coordinator for George Seifert. Kyle would spend his post-practice time running routes with the 49ers receivers that included Jerry Rice.

“He learned by watching and you didn’t have to tell him anything twice,” said McCaffrey, who is now a high school coach in Colorado. “He would watch me or Jerry Rice, see how someone did something and he would try to copy it immediately. He was really good at doing that.

“Some people take a long time to learn and process, you might have to tell them over and over again or show them multiple times. Kyle was always a really quick learner. You could tell he was watching with an intensity. But you could tell he never wanted to be a burden. He has a great feel for what is enough and what’s too much.”

McCaffrey has had a close relationship with the Shanahans for 35 years. He has little doubt how Mike feels watching Kyle’s success.

“I don’t think Mike could be more proud of his son,” McCaffrey said. “I think he’s so proud that he’s grown up to be the man that he is today, the father and husband and coach that he is today. He looks at him with incredible pride. They have a great relationship. Mike only seems to offer stuff when Kyle asks for it. But at the same time, Kyle has all the respect in the world for his father. They have a pretty incredible relationship of love and respect and mutual admiration.”

What remains to be seen is if Kyle can enjoy the same ultimate success as his father. It would make them the first father-son coaching duo to win Super Bowl titles.

To do that, Kyle Shanahan might have to go through Belichick and the Patriots. Kyle Shanahan almost got the best of Belichick in Super Bowl LI, when Shanahan’s brilliant game plan for the Falcons had the Patriots running in circles and trailing 28-3 in the third quarter. We all know what happened next.

Simms would like to see a rematch and likes his longtime friend’s chances.

“He’s as focused an individual as I’ve come around. He lives it,” said Simms, who was a coach for the Patriots in 2012. “I truly think the 49ers can beat the Patriots in the Super Bowl, not only because of what he’s built player-wise, but I think he can compete with Belichick in the preparation and compete with Belichick in the creativity and outside-the-box thinking. I would say Kyle understands the complete game as much as any coach in football maybe other than Belichick. I know that’s a bold statement, but Kyle is that good. He’s spent his whole life building to this moment.”