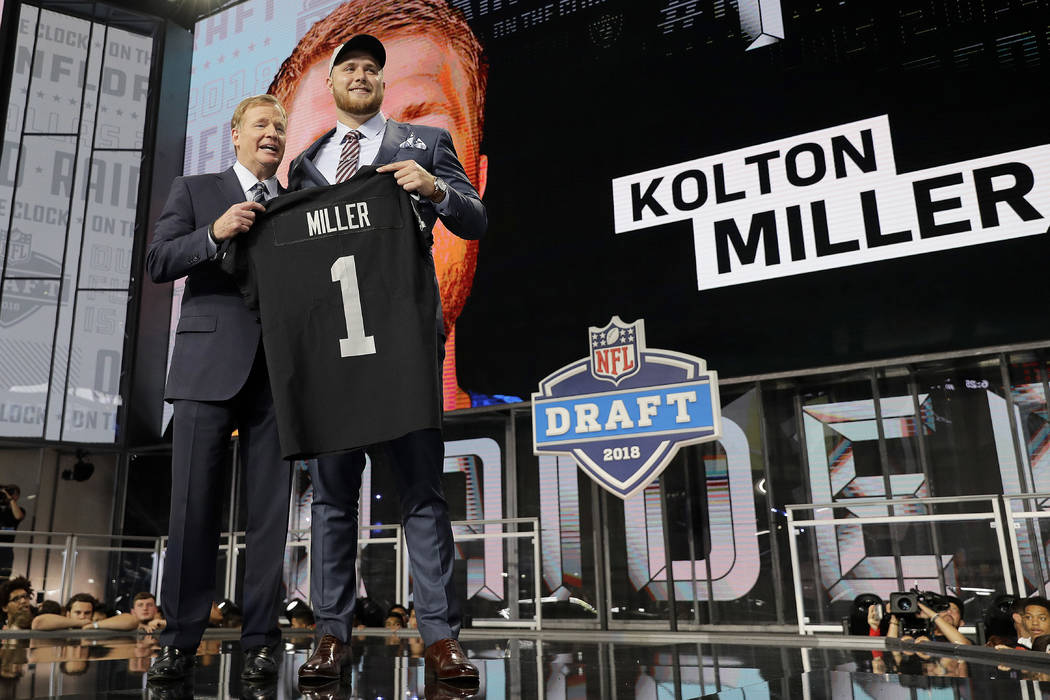 ATLANTA — Las Vegas and the Raiders will have a longer wait to find out if they’ll get to host an NFL draft.

The announcement for the host city of the 2020 NFL draft was postponed Wednesday at the league owners meetings. Las Vegas, Kansas City and Cleveland/Canton, Ohio, are vying to land the NFL draft in two years.

Nashville was officially awarded next year’s draft by the league. Denver was one of the five finalists entering the meetings but only made a bid for the 2019 draft.

The @NFL Draft is officially coming to Nashville in 2019! pic.twitter.com/I5LC7ziJ7g

Peter O’Reilly, the NFL’s senior vice president of events, said an announcement could come at the fall meetings in October at the earliest.

“Las Vegas clearly has a strong bid, a lot of excitement in that market that is peaking as the Raiders look to return,” O’Reilly said. “I know (there’s) a real interest in hosting the 2020 draft. So we’ll spend time with them on what’s the best way to bring the draft to life in Las Vegas because there are obviously so many venues and opportunities there.”

Las Vegas’ biggest threat to land the 2020 draft might be the combined bid from Cleveland and Canton that includes the Pro Football Hall of Fame. The league will celebrate its 100th season in 2020 and having the draft at the Hall of Fame to kick-off the celebration year could be an enticing situation.

“The Hall of Fame in partnership with the Cleveland Browns, the Cleveland Sports Commission and Visit Canton stand ready to host the NFL Draft in 2020 should we be selected,” Pro Football Hall of Fame president David Baker said in a statement. “In the meantime, the Hall and the entire Canton region remains focused on preparing for the once-in-every-other-lifetime opportunity in 2020 to celebrate the NFL’s Centennial in Canton, the birthplace of the league.”

Raiders president Marc Badain said he doesn’t see any finalist as the favorite and will continue to push for the 2020 draft. Badain and league officials are scheduled to meet again in June in Las Vegas to discuss the draft and the city possibly hosting a future Super Bowl.

“There’s a lot of creativity in Vegas,” O’Reilly said. “How do we use the iconic locations for the draft like the Bellagio fountains, which have been used for concerts and other things in the past? How do you create that type of energy, red carpet feel of big moments? That’s what we want to work with them on.”

The Cowboys hosted the 2018 draft inside AT&T Stadium in Arlington, Texas, where a record-breaking 100,000 fans attended the draft experience on opening night for the first round.

The Raiders’ new Las Vegas stadium isn’t expected to open until the summer of 2020. The NFL draft is usually held in April or May.

“It would be wonderful to reward the city an event of that size,” Badain said last week. “We’ve seen hundreds of thousands of people attend in New York, Chicago, Philly and Dallas. I think this would be a great place to have it. You’ll have fans from all 32 teams in town for it. I think you can do a lot of things around it.”

Last year’s draft in Philadelphia drew 250,000 fans and 1,800 media members to the three-day event and generated an estimated economic impact of $95 million.

After having the draft in big cities, the NFL is now shifting toward smaller markets like Nashville next year and possibly Las Vegas, Kansas City or Cleveland/Canton in 2020.

“I think we are in this phase of going from market to market and really learning,” O’Reilly said.