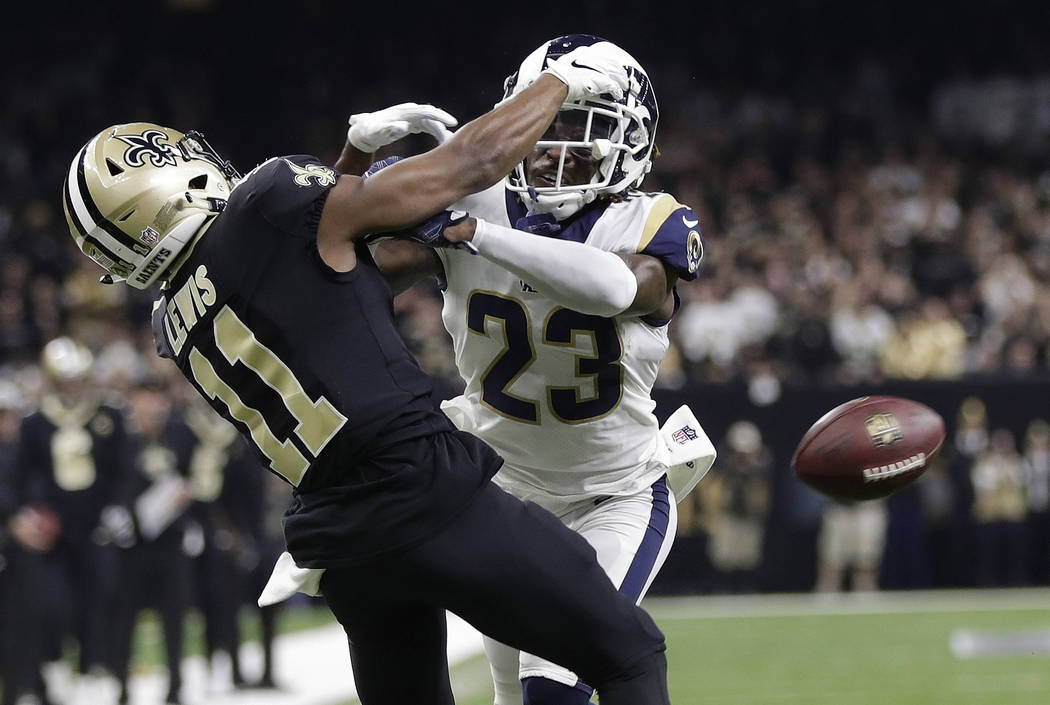 Los Angeles Rams' Nickell Robey-Coleman breaks up a pass intended for New Orleans Saints' Tommylee Lewis during the second half of the NFL football NFC championship game in New Orleans on Jan. 20, 2019. The NFL would love the main focus of 2019 to be on the celebrations of its 100th season. While the history of the league is a widespread and fun topic, what happened last January in the NFC championship game has guaranteed the spotlight will be shining on officiating and replays. (AP Photo/Gerald Herbert, File) 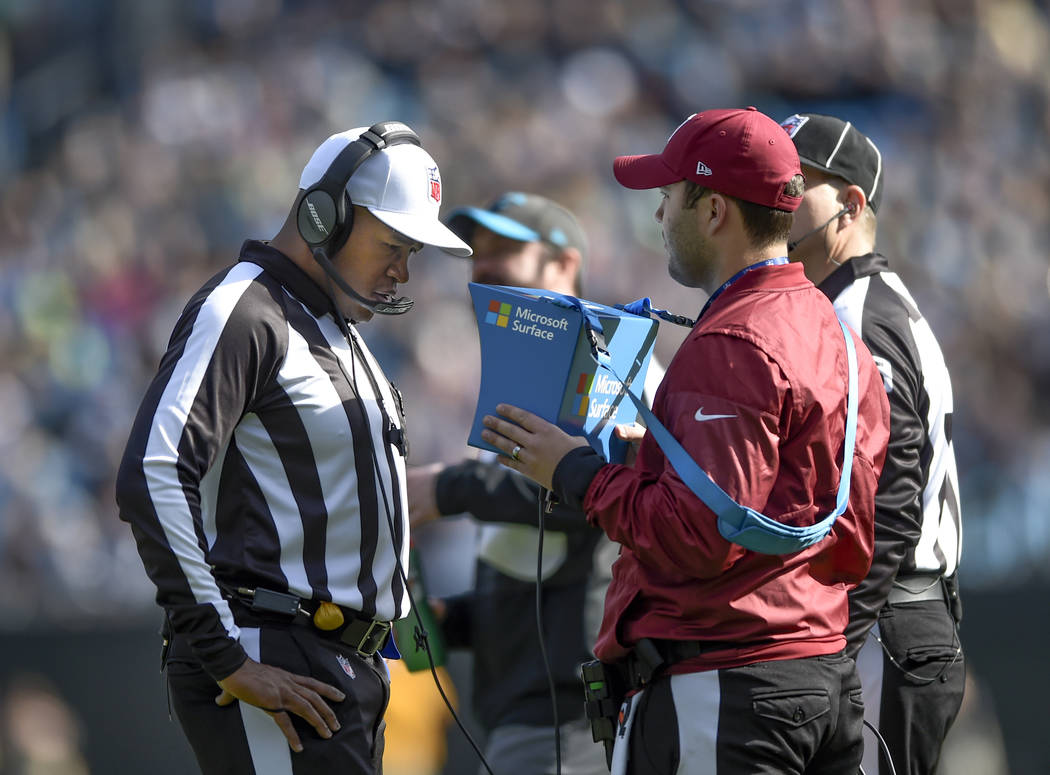 Referee Shawn Smith (14) reviews a play during the first half of an NFL football game between the Carolina Panthers and the Seattle Seahawks in Charlotte, N.C. on Nov. 25, 2018. After an egregious missed penalty (or two) that basically kept the Saints from making the Super Bowl and helped the Rams get there instead, there was little chance attention could be diverted from the guys with the whistles and their impact on games. (AP Photo/Mike McCarn, File) 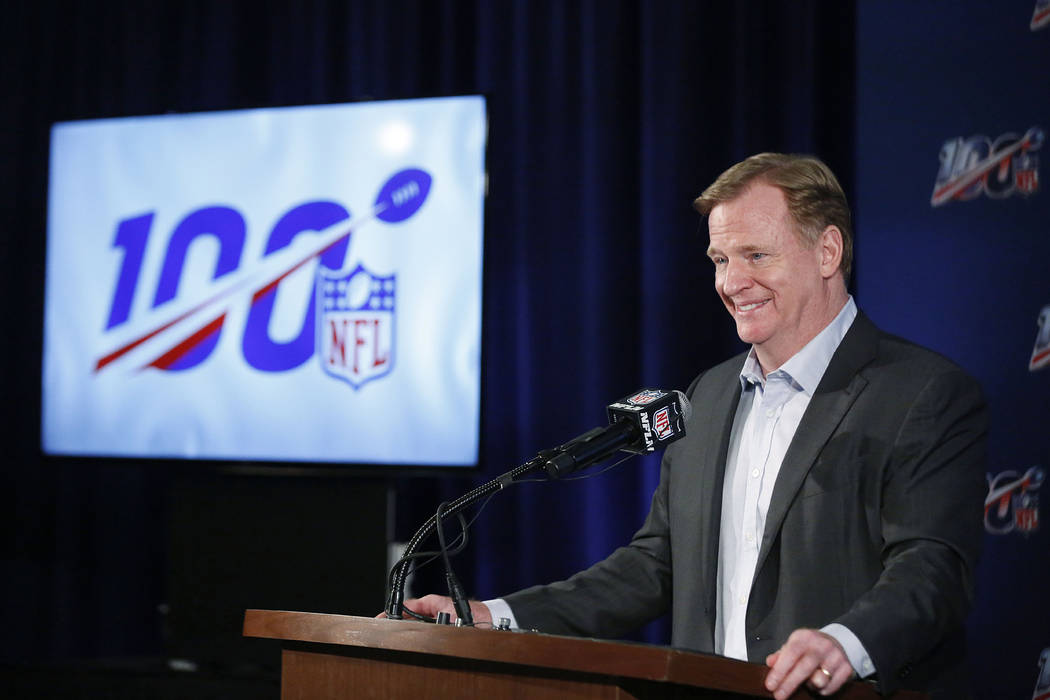 NFL Commissioner Roger Goodell speaks to the media during the NFL football owners meeting in Key Biscayne, Fla. on May 22, 2019. The NFL would love the main focus of 2019 to be on the celebrations of its 100th season. After an egregious missed penalty (or two) that basically kept the Saints from making the Super Bowl and helped the Rams get there instead, there was little chance attention could be diverted from the guys with the whistles and their impact on games. (AP Photo/Brynn Anderson, File)

The NFL would love the main focus of 2019 to be on the celebrations of its 100th season.

While the history of the league is a widespread and fun topic, what happened last January in the NFC championship game has guaranteed the spotlight will be shining on officiating and replays.

After an egregious missed penalty (or two) that basically kept the Saints from making the Super Bowl and helped the Rams get there instead, there was little chance attention could be diverted from the guys with the whistles and their impact on games. Commissioner Roger Goodell, the league’s powerful competition committee and a vast majority of the owners recognized this — and did something about it.

Coaches can now challenge pass interference calls and noncalls as part of the replay review system. Just as with other in-game instances, the replay booth will initiate any reviews in the final two minutes of both halves and for an entire overtime.

As former NFL defensive back Adam Archuleta, now a CBS game analyst, notes: “They have opened a huge can of worms.”

Sure, the Browns’ upgrades — some people envision Cleveland (yes, Cleveland) as a Super Bowl contender — provide a ripe subject. So do the head-coaching changes, including Bruce Arians returning to the sideline one year after retiring.

There are the aged quarterbacks, from 42-year-old Tom Brady to 40-year-old Drew Brees to late-thirtysomethings Ben Roethlisberger, Eli Manning and Philip Rivers. And the fledging QBs such as Baker Mayfield, Sam Darnold, Lamar Jackson and Kyler Murray.

But we all know what will hog the limelight.

Gene Steratore spent 13 years as an NFL referee and also was a college basketball official. Now with CBS as an officiating analyst, he knew some sort of change in the review system would emerge from the Rams-Saints debacle.

“Understand first that they were making the call in real time,” Steratore says. “That will remain the standard and base on which calls will be made on all plays. Then we get to replays, which are in slow motion of course, and you are getting a different look (than an official might get in real time).

“Then there is the determination of what is significant contact. Did it impede someone from making a play? Was it incidental? Some of that is adding subjectivity to the process.”

Archuleta, not surprisingly for a former safety, adamantly disagrees with adding anything to the replay system, particularly pass interference penalties.

“It’s not good for the game, which is not meant to be played in slow motion or officiated that way,” he says. “I don’t want them stopping games in critical moments. Pro football is an exciting and emotional sport and stoppages take away from that.”

A realist, Archuleta admits he knew something would happen after the New Orleans debacle. He accepts the coaches’ challenge as the most logical means, but doesn’t have to like it.

“Coaches are going to get burned on this, challenge plays that will not be overturned because of judgments, and they will be minus a timeout or a challenge later in the game,” says Hall of Fame coach Tony Dungy. “I think it is going to be a mess.”

Can anybody play defense?

With spread offenses overtaking the college game — and college defenses — it was only a matter of time before scoring records fell in the pros. Nothing much is expected to change this season with rules designed to boost points production; players on that side of the ball better prepared for the NFL when they reach it; and fans’ insatiable appetite for shootouts. Fantasy football fanatics can rejoice.

Still, the Super Bowl final score was 13-3, and there are several teams whose defenses successfully can determine their fate. The Rams, Chargers, Ravens, Bears, Cowboys and Bills could fall into that category.

Chicago, which led the league with 27 interceptions in ‘18, believes the Monsters of the Midway have been reborn. The Bears are primed to prove it.

Brady and Brees and Roethlisberger and Rivers and Manning equal 194 years of age, 87 seasons in the NFL. Each of them remains the starter, though Manning’s hold on the Giants’ job is tenuous.

It’s fair to think that, except for Manning, seeing any of those four oldies but goodies in the Super Bowl next February — particularly Brady, who is going for an unprecedented seventh Lombardi Trophy — would be no shock.

“I’m ready to go this year and that’s really what matters. That’s where my focus is,” Brady says. “It’s a unique situation I’m in. I’m in my 20th year with the same team. I’m 42 years old, so pretty much uncharted territory I think for everybody. I’m going to go out there and do the best I can this year and see what happens.”

At the other end of the maturity chart are the youngsters. We’ve already seen one prodigy, Kansas City’s Patrick Mahomes, mesmerize the league and win MVP honors in his second year, first as a starter. Now the spotlight could be taken by Cleveland’s Mayfield or the Jets’ Darnold or the Ravens’ Jackson, pro sophomores whose team’s ascensions depend largely on their further progress.

Changes on the sideline

Most intriguing might be the new boss with the Bucs, a proven QB guru who tries to mold Jameis Winston into a winner in a prove-it year for the 2015 top overall draftee.

“I’m going to work regardless, but it’s always a plus when your head coach believes in you,” Winston says of the 66-year-old Arians. “Every coach brings something different. I’m just really excited to get to work with them.”

Changes on the field

New faces in new places figure to have a major impact, and if those effects are positive, their teams could be playoff bound.

Bell would seem the perfect guy to bring in to help Darnold make the next big step. Following a year off in a holdout, Bell will be driven to prove he’s worth the money the Jets paid and the Steelers would not. At his best, there’s no better all-around running back in football.

When healthy and at his best, Thomas finds the right spot to be in — and gets his defensive teammates in those positions, too. There are few stronger leaders in the game, and he also has extra motivation after the way things deteriorated in Seattle.

Beckham is a magnificent talent with baggage and a fragile psyche. If he is the playmaker and not the pouter, the Browns have a prize.

As for Brown, well, the numbers he’s produced for nearly a decade can’t be ignored. Unfortunately, neither can the drama he has brought from the Steelers to the Raiders.

But it does keep us watching, doesn’t it?

5
Father of 2, killed in motorcycle crash, was ‘always wanting to make people happy’