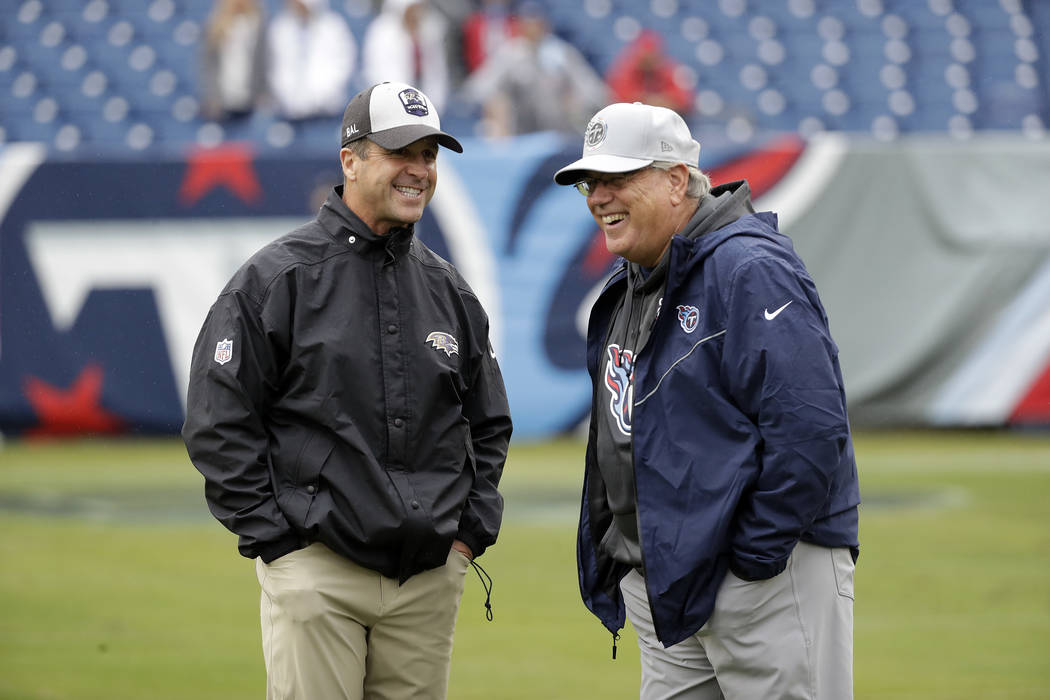 Eyebrows across the NFL were raised immediately after the 2017 season when then-Ravens defensive coordinator Dean Pees announced his retirement.

Pees might have been 68 at the time, but it’s not like Baltimore’s issues were on the defensive side of the ball — Baltimore’s offense was just 27th in yards and would hand the quarterback reigns from Joe Flacco to Lamar Jackson in the middle of the 2018 season.

The defense may not have been the Ray Lewis and Ed Reed Ravens, but they still finished ranked sixth in points allowed — tied for the best mark since Pees’ arrival in 2012, when he helped them win Super Bowl XLVII.

But Pees cited his desire to spend more time with his family, especially in the wake of the passing of veteran defensive line coach Clarence Brooks near the start of the ’16 season.

So Pees’ retirement wasn’t all that shocking … until less than a month later when Pees was named Mike Vrabel’s defensive coordinator of the Titans.

Just over two years later, Vrabel and Pees take their Tennessee team into Baltimore to try to upend the top-seeded Ravens.

Talk about strange coincidences, which add to one of the biggest subplots of divisional playoff weekend.

“I had eight great years (with Baltimore),” Pees said this week. “When I left there, I left there retired. I didn’t leave there because I had to … I left there just literally because I was retired and leaving. So I have the utmost respect for them.”

Pees said a lot of the defensive staff in Baltimore is the same as when he was there. “So a lot of friends,” he said. “But it’s like they always say, ‘If you go out and play golf, I’d rather beat my brother at golf than somebody I don’t know.’ So we’ll all be keyed up for it and want to get after them. But at the same time, when it’s over, those people are still my friends.”

A Ravens source confirmed that Pees indeed left the Ravens voluntarily — in fact, he was offered a contract extension — and that there’s no ill will on either side. Baltimore has been thrilled with the job done by successor Don “Wink” Martindale.

Pees and Ravens coach John Harbaugh have a long history together, dating back to Pees being Harbaugh’s defensive coordinator when he was a player at Miami (Ohio).

“Nothing but respect for Dean,” Harbaugh said. “We’ll see a Dean Pees defense (on Saturday). … Very aggressive. They run to the ball. They play hard to the tackle. They’re very sound. Schemes are all very sound, very well thought out. Always going to try to take away what you do best. Never any real weaknesses in the defense. So, I’d say a typical Dean Pees-coached defense.”

There’s another layer to Pees going against the Ravens. When he helped lead Baltimore to its last Super Bowl title after the 2012 season, it was against the 49ers, who featured a cutting-edge offense quarterbacked by Colin Kaepernick and coordinated by Greg Roman. Harbaugh said the Ravens have gone back and studied that game to see how Pees defended that attack.

Pees on Saturday will be trying to stop Roman, now the Ravens’ offensive coordinator, and his new multi-faceted attack triggered by Jackson. The top-seeded Ravens (14-2) led the NFL with 33.2 points and 206 yards rushing a game. Jackson, the favorite to be the league’s MVP in just his second season, has thrown for an NFL-high 36 touchdown passes and has run for a league single-season record of 1,206 yards.

“Dean’s got a couple things up his sleeve,” said Titans defensive tackle Jurrell Casey. “At the end of the day, we’re going to run our defense. It’s been working for us all year long. … We just got to make sure we execute.”

Vikings at 49ers (-7): Two of the best rushing teams in the league will grind this game out and keep the scoring low. Kirk Cousins’ new-found confidence keeps this close. 49ers 23, Vikings 20.

Titans at Ravens (-9.5): Tennessee has enough speed on defense and familiarity to keep Lamar Jackson in check, but not enough on offense to pull the upset. Ravens 27, Titans 20.

Texans at Chiefs (-9.5): Too many players were missing the first time these two teams met (Texans 31-24) to be much of a factor, but Patrick Mahomes has not been sharp since his return from injury. Chiefs 31, Texans 27.

Seahawks at Packers (-4): There’s not a better road team in the league than Seattle (8-1). Game could hinge on whether Seahawks LT Duane Brown (knee) plays. Seahawks 20, Packers 17.