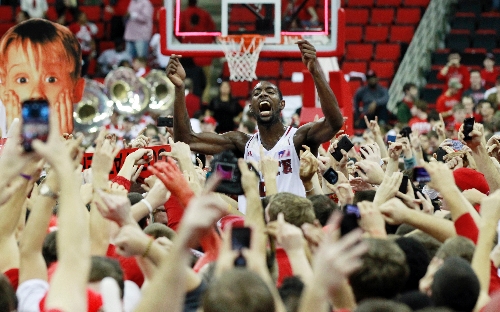 RALEIGH, N.C. – C.J. Leslie and Richard Howell wanted this moment, the chance to help No. 20 North Carolina State make a big step forward after a bumpy start to a season filled with potential.

Now, after a rousing performance to take down No. 1 Duke, the duo has put the Wolfpack back on everyone’s radar.

Howell added 16 points and 18 rebounds in a relentless performance for the Wolfpack (14-2, 3-0 Atlantic Coast Conference) in a matchup of the teams predicted to finish 1-2 in the league.

“Coach (Mark Gottfried) said in the locker room: Nobody’s going to give us anything and we’ve got to take it,” Howell said. “That’s the mindset we came out with. We’ve got to take everything … and that’s what we did.”

North Carolina State was picked for the first time in nearly four decades to win the ACC, though two early losses drained some buzz.

No longer. Any lowered expectations are gone, as is Duke’s perfect record.

“I thought our guys, they accepted the challenge,” Gottfried said. “It’s one of those (games) where it comes to a point where mentally you say, ‘I’m going to get it done’ and they’re not going to go away. … Our guys showed a lot of toughness.”

Lorenzo Brown finished with 12 points and 13 assists for the Wolfpack, while senior Scott Wood added 14 with three 3-pointers – including a four-point play in the first half.

Seth Curry scored 22 despite missing the final minutes with a left ankle injury for Duke (15-1, 2-1).

With the Blue Devils’ loss, No. 2 Michigan (16-0) is the nation’s last unbeaten team heading into today’s game at No. 15 Ohio State.

Fittingly, Howell hauled in the rebound on Duke’s final shot, then passed the ball to Brown as Leslie began celebrating near midcourt. Brown flung the ball high into the air as the horn sounded, while students and Wolfpack fans stormed the court – the charge led by a fan in a wheelchair – to celebrate.

Fans soon lifted Leslie and Brown on their shoulders amid the sea of red-clad jubilation.

“I saw the whole court and I couldn’t see a bit of court,” Leslie said. “It was just people everywhere. So that’s going to be a remembrance we’ll never forget. We’ll always keep this in our minds.”