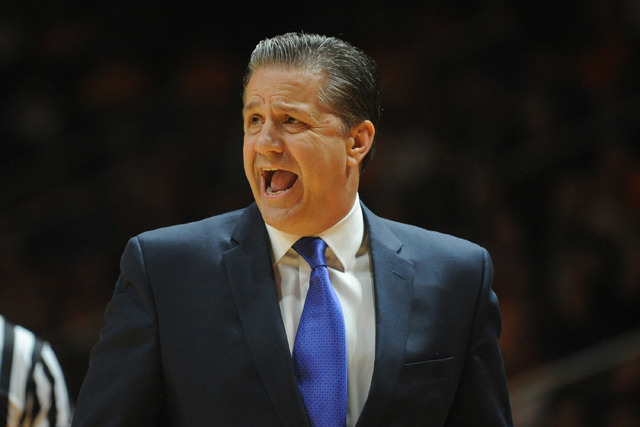 With the calendar turning to March on Sunday, we turn our attention to college basketball and Kentucky’s pursuit of perfection.

The No. 1 Wildcats improved to 28-0 after Wednesday’s 74-56 win at Mississippi State to keep alive their bid to become the first team since Indiana in 1976 to claim the national championship with an undefeated record.

The Wildcats — whose 28-game win streak is the second-longest in school history behind a 32-game run that stretched from 1953 to 1955 — will travel to Georgia on Tuesday before wrapping up their regular season March 7 at home against Florida.

John Calipari has compiled a 180-37 (.829) record at Kentucky and has the best winning percentage of any coach in school history.

Los Angeles Kings at Anaheim Ducks (7 p.m., Prime (50)): The defending Stanley Cup champion Kings took an eight-game winning streak into Thursday’s game against the Ottawa Senators to put themselves back in the playoff picture after winning one of their previous eight games. The Ducks (38-17-7, 83) bring the second-best record in the West into this battle between Southern California squads.

Cleveland Cavaliers at Houston Rockets (12:30 p.m., ABC (13)): LeBron James, third in the NBA in scoring with 25.7 points per game, has helped the Cavaliers open the second half of the season with three straight road routs in which Cleveland has outscored opponents by an average of 21.7 ppg. James Harden, the league’s leading scorer with 27.2 ppg, and his beard are the main reasons the Rockets have been able to remain near the top of the Western Conference standings without injured center Dwight Howard.