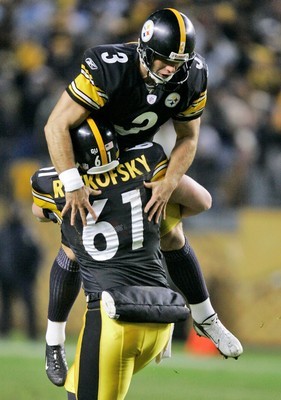 After further review, NFL officials had some explaining to do about a mysterious ruling on an apparent touchdown scored by Troy Polamalu of the Pittsburgh Steelers.

There was controversy inside Las Vegas sports books Sunday, and the conclusion of the San Diego Chargers-Pittsburgh game was the issue.

In the end the Steelers won, 11-10. But the final score should have been 17-10 or — pending an extra-point kick that never happened — 18-10. The result was significant because Pittsburgh was favored by 4 points.

The postgame explanation by game referee Scott Green, who admitted Polamalu’s touchdown was erroneously taken away from the Steelers, is sure to anger some bettors and raise concerns about the integrity of NFL officiating.

“There was a lot of talk about it, and there were some upset people,” Las Vegas Hilton sports book director Jay Kornegay said.

Mass confusion ruled after Polamalu, the Pittsburgh safety, returned a fumble for a touchdown as time expired to temporarily put Pittsburgh ahead 17-10. It was an illusion, though.

The replay booth reviewed the play while the Steelers lined up for the point-after kick. After the review, Green explained there was an illegal forward pass by Chargers running back LaDainian Tomlinson, the penalty was declined and the result was a touchdown.

But the official suddenly reversed the call, disallowed the touchdown and announced the game was over for an 11-10 Steelers victory.

“For a few minutes there, the Steelers bettors thought they had a miracle cover. That would have been one of the more amazing covers we’ve seen in a while,” Kornegay said. “I had the NFL Network on and they were showing 17-10 as the final score.

“We waited a few extra minutes before we posted the game. We wanted to make sure we had the correct final score.”

After getting confirmation from about five sources, Kornegay said, the final was posted as 11-10. That official result, in a way, turned into a miracle cover for those who bet on the Chargers.

Replays clearly showed San Diego’s Philip Rivers completed a pass to Tomlinson, who flipped a lateral to wide receiver Chris Chambers. The ball was pitched back and fumbled by Chambers, and Polamalu recovered at the 12-yard line and ran in for the touchdown.

Green, interviewed by a pool reporter, said the officials’ call was wrong.

Green said the confusion occurred because there was a misunderstanding about whether Tomlinson’s pass or Chambers’ pass was in question.

“The first pass was the one that was illegal, but it only kills the play if it hits the ground,” Green said. “That was incorrect to have killed it at that point. The ruling should have let the play go on.”

Green’s explanation was odd because replays seemed to show Tomlinson made a lateral.

“I didn’t see the illegal forward pass during that play,” Kornegay said. “Those looked like laterals to me.”

NBC analyst Cris Collinsworth confirmed as much at halftime of the Dallas Cowboys-Washington Redskins broadcast.

“The first of those dipsy-doodle things was ruled an illegal forward pass that should not have ended this play, so this should have been a Pittsburgh Steelers touchdown,” Collinsworth said. “But despite the fact that point differential is the seventh tiebreaker (for the playoffs), this score will not be changed.”

It was the second officiating fiasco in a Chargers game this season. The NFL also acknowledged a mistake by referee Ed Hochuli in Denver’s 39-38 victory over San Diego on Sept. 14.

Unfortunately, there was no recourse for bettors in either case.

“Once it’s posted, it’s over now,” said Avello, adding that the books needed San Diego to cover. “It leaves a bad taste with bettors when they think they should have cashed a ticket.”