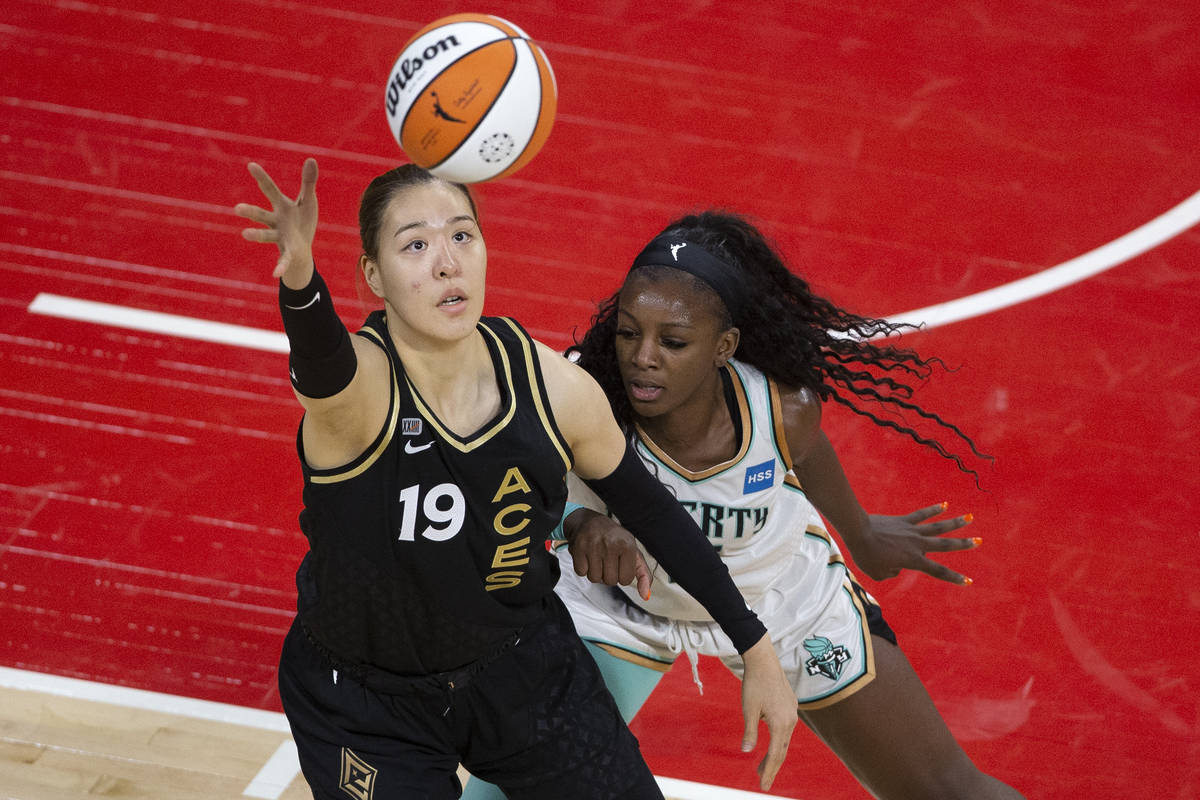 Her teammates depart the basketball court inside Michelob Ultra Arena, retreating to their locker room — and eventually their homes — after Aces home games.

Maybe she’ll sprint the length of the floor, simulating the intensive cardiovascular activity her sport so often requires. Maybe she’ll ride the exercise bike stationed adjacent to the court to build additional endurance. Conditioning is conditioning, one way or another. And she’ll need it later this month during the Olympics in Tokyo.

Park may only play 9.4 minutes per game for the Aces, but she rarely comes off the court while playing for her native South Korea. At the age of 22, she’s the face of basketball in her home country and the most accomplished player in its history. Come July 25, she’ll lead her team onto the Saitama Super Arena court to play in its first Olympic game since 2008.

“I don’t know what it would be like for the U.S. team to go to the Olympics and win gold medals every time, but the Korean national team was very happy (to qualify),” Park said through a translator application on her mobile phone. “I’ve always wanted to go to the Olympics. I’m so happy to achieve it.”

Park was something of a prodigy in South Korea, debuting in international play at the age of 13 for the country’s under-17 team in FIBA World Championship competition. Her profile continued to grow amid her rise through the international ranks.

She debuted for the senior national team at 16, becoming its youngest player ever.

The pressure mounted, but Park continued to perform and elevate her profile by dominating the WKBL, South Korea’s domestic professional league. She was its Rookie of the Year in 2017 and its MVP and Finals MVP in 2019. She added another MVP this past season before returning to the Aces, who acquired her in 2018 during a draft-day trade with the Minnesota Lynx.

Park may not play much for Las Vegas, but teammate and fellow Olympian A’ja Wilson says the 6-foot-5-inch center carries herself with more confidence now in her third WNBA season.

“Watching her grow up from a 19-year-old until now, it’s a big difference,” said Wilson, the reigning WNBA MVP. “(She) wouldn’t be here if (she) couldn’t do what she needed to do.”

Park acknowledged that the transition from the WKBL to the WNBA was challenging, but said it prepared her to have additional success abroad. She competes in practices every day in the frontcourt with Wilson and Liz Cambage, another perennial All-Star who is playing for Australia in Tokyo.

Her role for South Korea, Park says, is akin to Wilson’s or Cambage’s role on the Aces. That of a primary scorer or offensive focal point. Case and point: She played 37:19 in a crucial victory over Great Britain last February during Olympic qualifying, recording 15 points, nine rebounds, three assists and six blocks.

Aces coach Bill Laimbeer believes her forthcoming Olympic experience can continue to aid her development, with which he’s already pleased given her relative youth in the WNBA.

“She’s going to go there and be the star of the show for their team. That’s what she is in their league,” Laimbeer said. “Utilizing what she’s learned in the WNBA and with the Las Vegas Aces over the last few years can translate into a really good individual performance in the Olympics.”