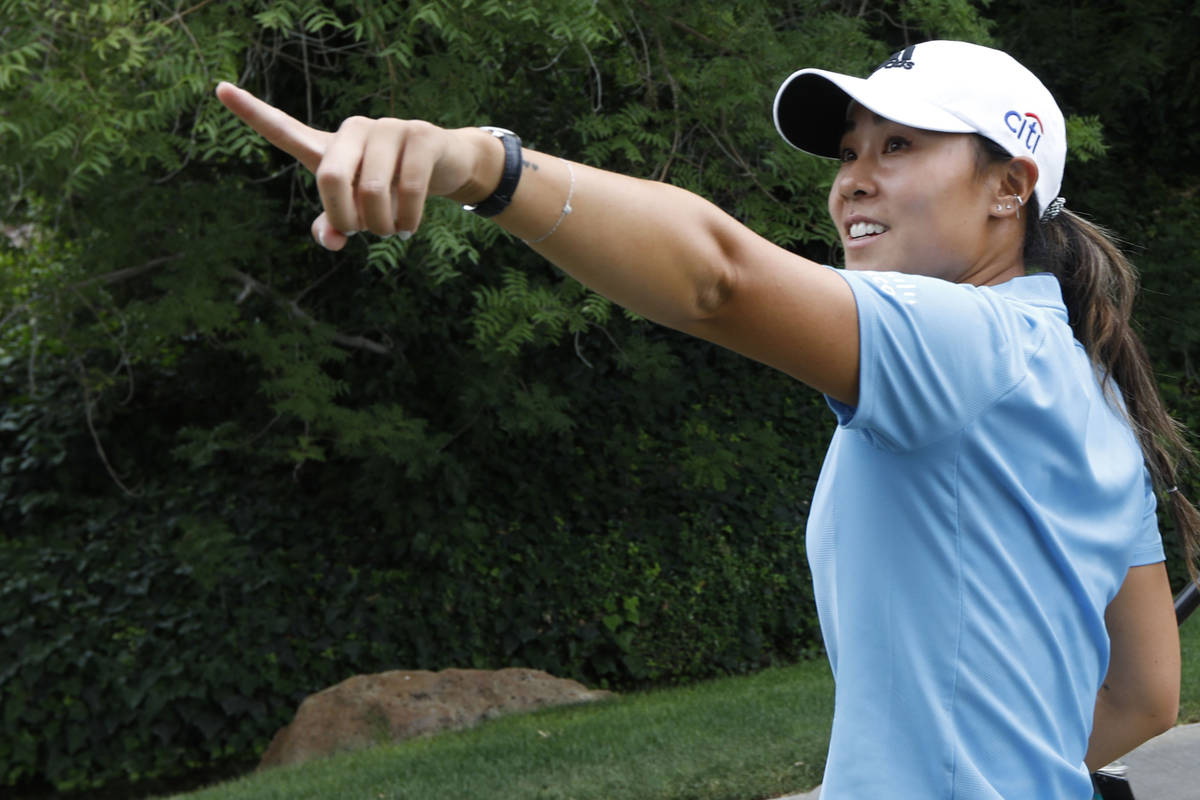 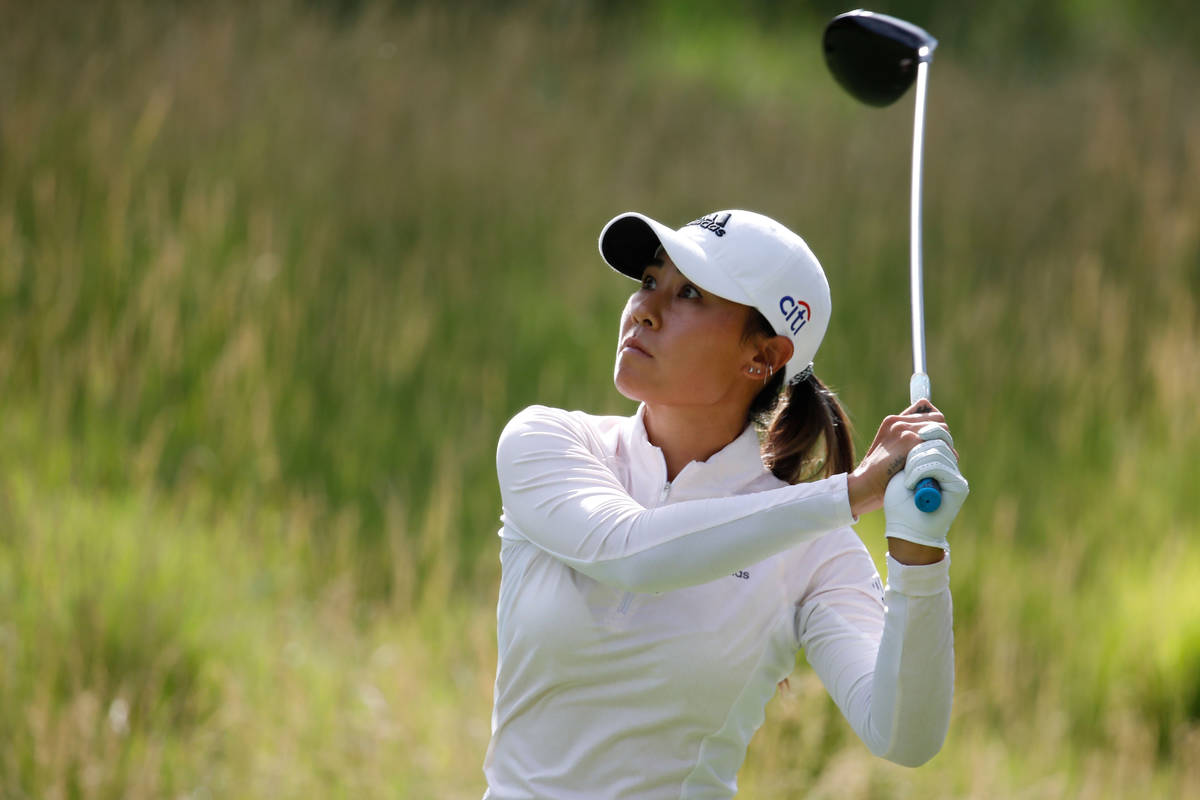 Danielle Kang watches her tee shot on the 16th hole during the quarter final round of the Bank of Hope LPGA Match Play at Shadow Creek Golf Course in North Las Vegas, Saturday, May 29, 2021. (Chitose Suzuki / Las Vegas Review-Journal) @chitosephoto

Danielle Kang always dreamed of being in the Olympics. But as a youngster growing up in Southern California, she thought taekwondo was her path to Olympic glory.

A second-degree blackbelt who loved the one-on-one competition in martial arts, Kang’s athletic career took a turn when she picked up a golf club at the age of 12. She skyrocketed to success in the game and quickly found herself among the best golfers in the world.

Now at the age of 28, the Las Vegas resident is an Olympian. Kang will tee it up in Tokyo in the coming days in her lifelong quest for an Olympic medal.

“I can’t speak for what the Olympics means for a lot of people, but for me it’s everything,” she said in June after her spot on the team became official.

The Olympic competition means so much to her that she’s taking this week off to rest and practice for Tokyo, bypassing a major championship on the LPGA Tour.

“I didn’t make the decision lightly,” Kang said about skipping the Evian Championship. But with the tournament in France, the Olympics in Japan, the Women’s British Open and the Solheim Cup all coming up in the next six weeks, something had to give.

“It just got a bit too chaotic,” she said of her schedule. “The best thing for me to do was skip the week, and it happened to be Evian.”

Making the Olympics a priority isn’t a surprise to Butch Harmon, Kang’s coach of about three years.

“The Olympics is a huge thing for her,” Harmon said. Even though events will be contested in empty stadiums and arenas, and special moments like the opening and closing ceremonies will be muted, “it’s still the Olympics.”

Harmon expects his star pupil to play well in Tokyo. “She’s more than ready,” he said.

If anyone should know, it would be Harmon. He took on Kang as a client when she was at one of the lowest points of her golf career.

Kang had won for the first time on the LPGA Tour at the 2017 KPMG Women’s PGA Championship. But things went into a tailspin shortly after that as she missed seven of nine cuts in the summer of 2018. With a month off until her next tournament, Kang took a suggestion from Dustin Johnson and turned to Harmon, the legendary Las Vegas-based teacher.

When they first met, Kang had all the talent in the world but was dealing with a lack of confidence and anxiety, Harmon recalled.

“Danielle is an incredible competitor and is really hard on herself,” Harmon said. “We not only had to work on her game, but I had to get inside her head.”

The pairing paid off immediately. In her next start, she tied for third at the Hana Bank Championship, then won the following week in Shanghai.

“She got her confidence back,” Harmon said. “That was the key.”

Confidence had never been an issue before for Kang, who had a brief but incredible amateur career.

She admits to getting a little jealous after watching her brother Alex find success as a junior golfer. So she put aside taekwondo and picked up a golf club just before turning 13. Less than two years later, at the age of 14, she qualified for the U.S. Women’s Open in 2007.

She dominated the Southern California amateur golf scene. At 17, she won the U.S. Women’s Amateur, beating Olympic teammate Jessica Korda in the final. She repeated the following year, dominating the final against Moriya Jutanugarn, who will be playing for Thailand in the Olympics.

Kang continued her amateur career at Pepperdine, but after less than two years, she left college and turned pro in 2012. She made it through qualifying to reach the LPGA Tour, but for the first time in her life, there were no wins to be found.

The death of her father in 2013 also had an impact on her game. She told Golf Digest that for the next three years, she felt angry on the course before realizing something had to change.

A new and improved Kang showed up on tour in 2017, when she claimed her first win. Teaming up with Harmon came a year later, and she’s been among the best players in the world since.

She’s won every season for the past four years, including back-to-back in 2020 when the tour resumed after a six-month COVID-19 break. She’s gotten as high as No. 3 in the world rankings and played on the U.S. Solheim Cup team in 2017 and 2019. She is a lock for this year’s team.

But making the Olympic team is the accomplishment she quietly wanted more than anything.

“I finally feel like myself because the one thing that was the pinnacle was to just hit that mark that I qualified for the Olympics as a USA athlete,” she said.

Kang thought she had reached her dream last spring, when the deadline to make the 2020 team arrived. But when the pandemic pushed the Olympics back a year, the clock restarted on making the team.

“When the Olympic qualification got extended an extra 15 months, I cried and panicked because I qualified back then, and I felt that, if I didn’t qualify again for some reason, for whatever happened, I couldn’t call it an accomplishment.”

The past year has been stressful in that regard.

“For me to have to re-accomplish something that has been my life goal and dream was really tough on me,” she said. “I couldn’t stop looking at the Rolex (world) rankings. I couldn’t stop worrying about what other people did.”

Kang and Jessica Korda, both 28, will be the veterans of the U.S. women’s team, which also includes Lexi Thompson (26) and Jessica’s younger sister, Nelly Korda (22), the new No. 1 player in the world.

It’s a statement for Southern Nevada, which is now home to a large number of tour players. Kang is at the center of it all.

Takes on all comers

On off weeks, she can be found at TPC Summerlin or Shadow Creek, working on her craft and taking on all challengers. Harmon said Kang will often play with — and beat — the men.

It’s that attitude, he said, that makes her special. She is a great ball striker and putter, but Harmon says it’s another asset that gives her an advantage over her opponents.

“She’s not afraid of anyone or any course,” Harmon said. “It’s an intangible you just can’t teach.”

Harmon is sorry he can’t be in Tokyo to watch her play, due to the pandemic restrictions. Kang had invited him so that she could give him something none of his other high-profile pupils had ever done: an Olympic gold medal.

Kang will battle with 59 other women for one of the three medals. But win or lose, she’s proud to be there.

“You’re an Olympian for life,” she said. “Everyone that’s made it has worked really hard in their lives and gone through their own journey to be there. It’s something special.”

Greg Robertson is a freelance reporter who covers golf for the Review-Journal. He can be reached at robertsongt@gmail.com .