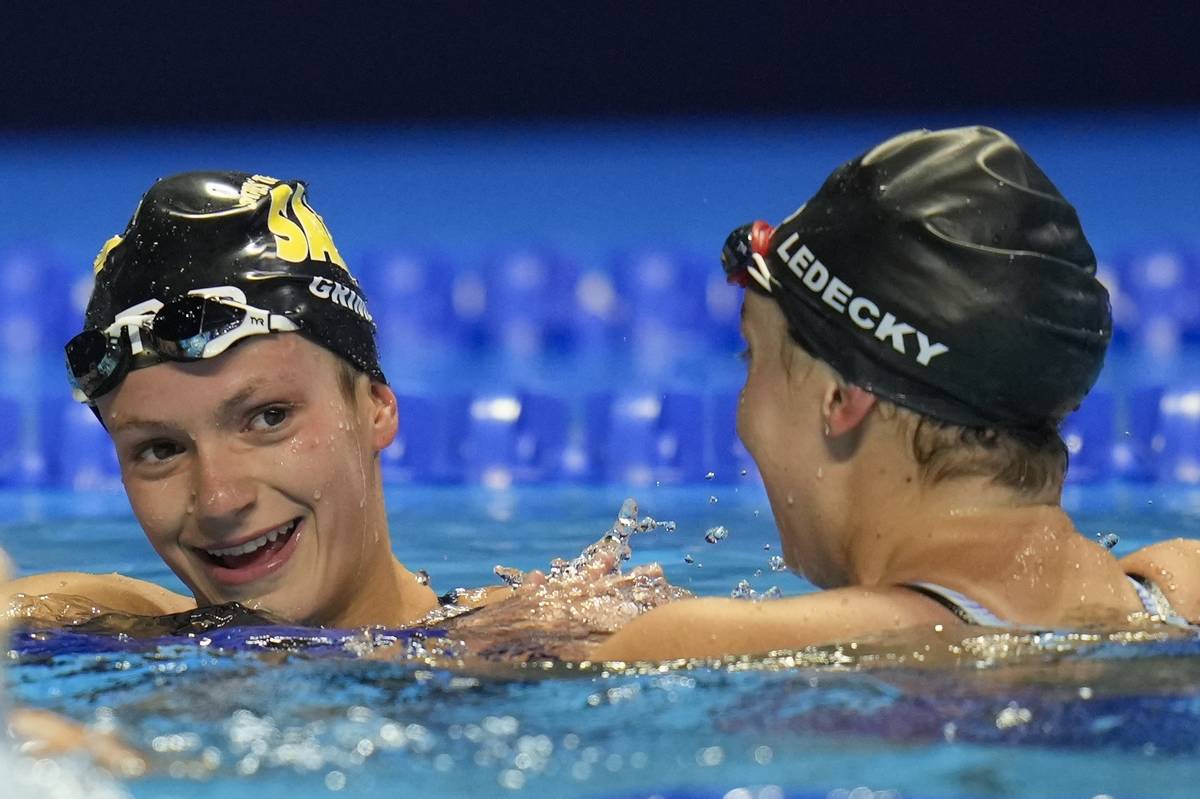 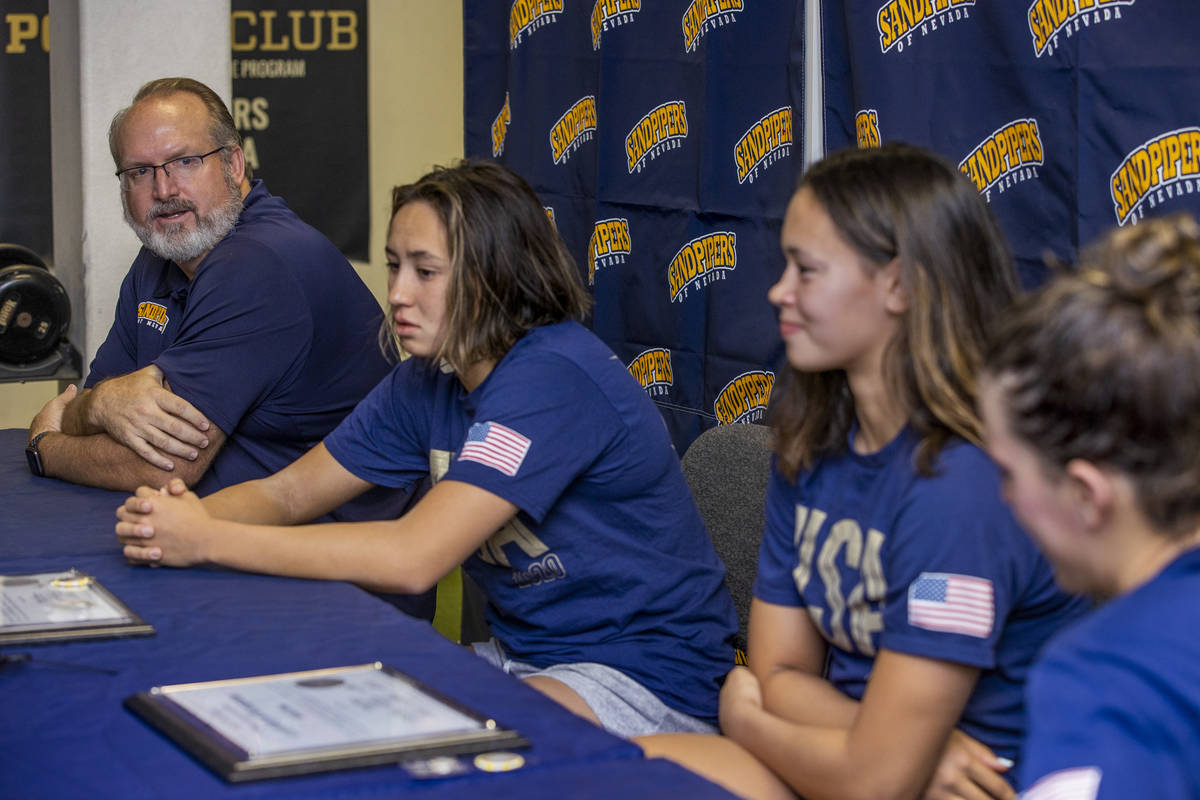 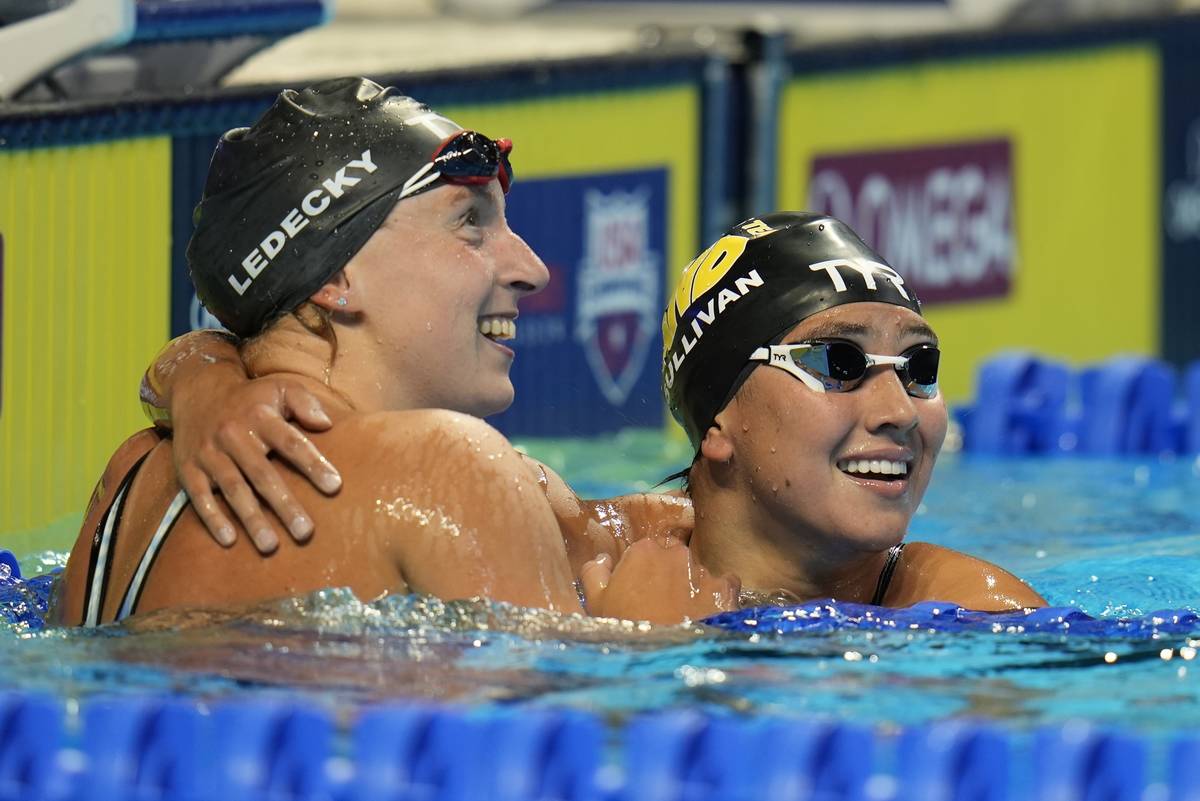 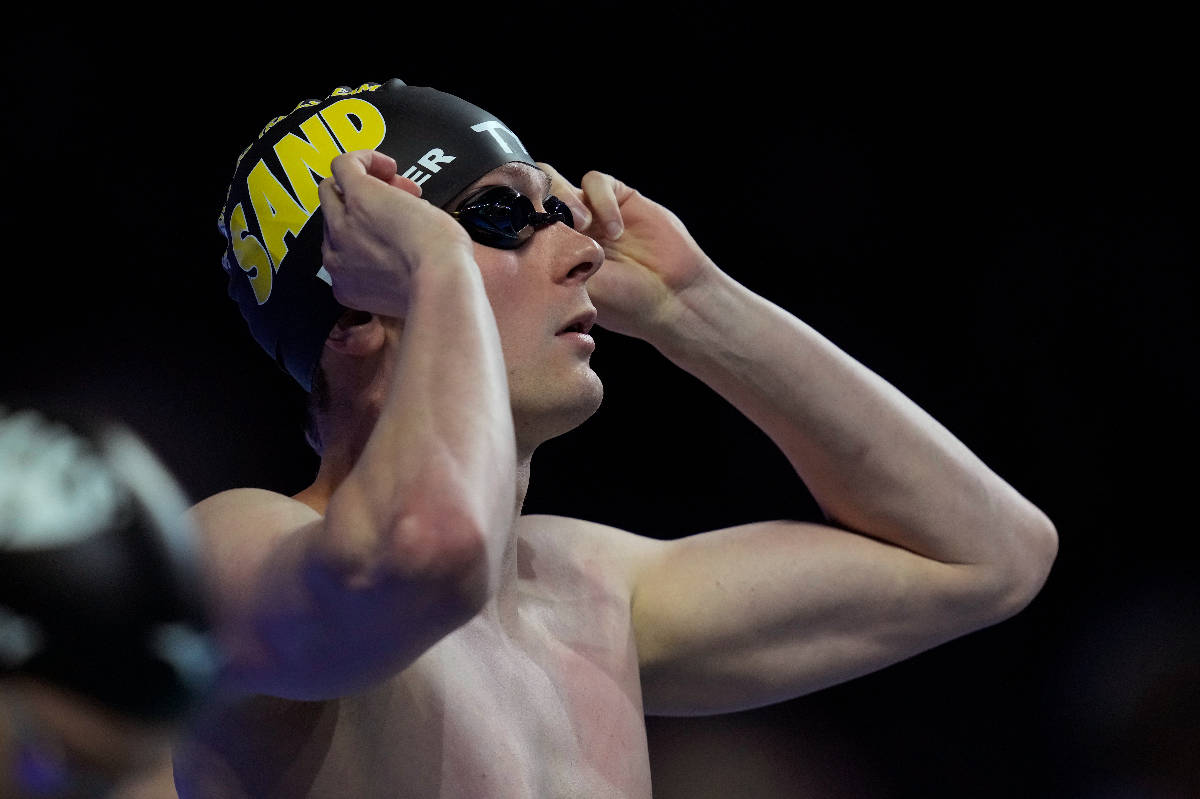 Bowe Becker gets ready to compete in the men's 50-meter freestyle final during wave 2 of the U.S. Olympic Swim Trials on Sunday, June 20, 2021, in Omaha, Neb. (AP Photo/Charlie Neibergall) 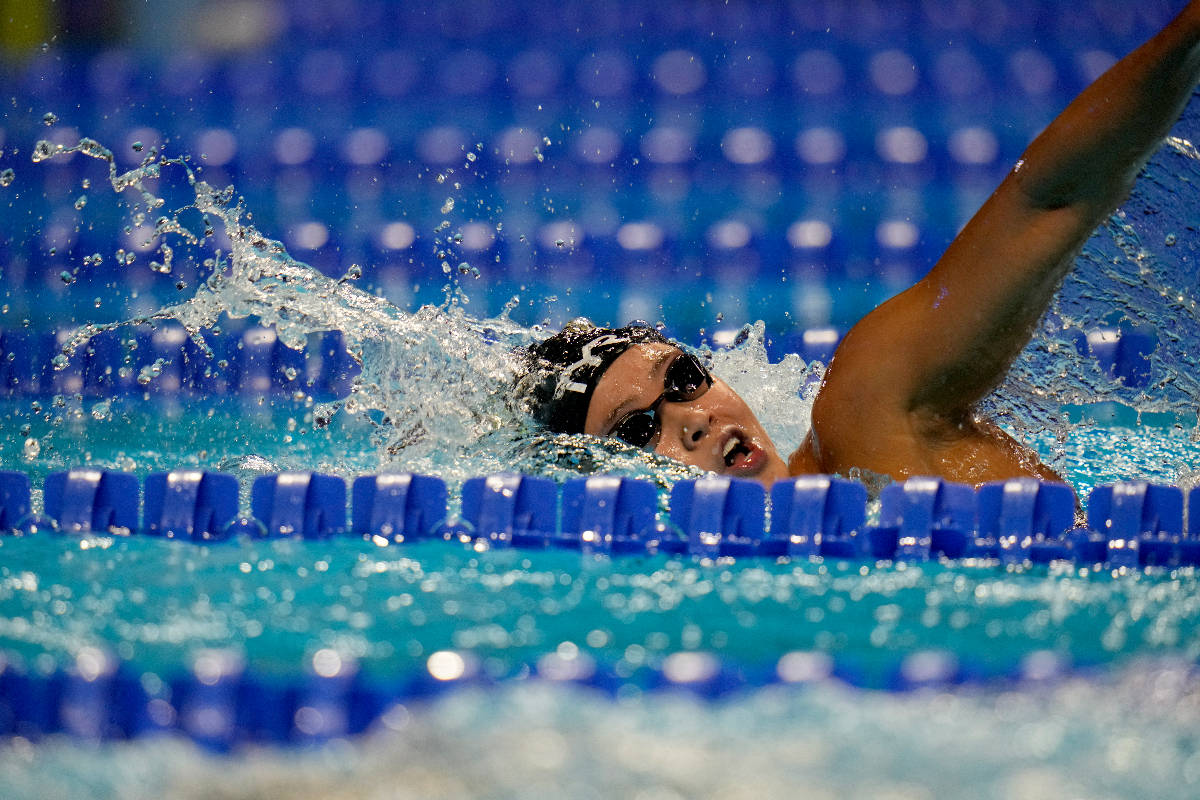 Olympic champion Katie Ledecky took her position in the fourth lane in the 800-meter freestyle at the U.S. swimming trials, a heavy favorite to race to another victory.

Erica Sullivan and Bella Sims were on opposite sides of her. Both wore Sandpipers of Nevada swimming caps, as did Katie Grimes in the eighth lane.

Three Las Vegas natives were among eight finalists competing for two spots in the Tokyo Olympic Games in the June 19 race in Omaha, Nebraska.

The Sandpipers wound up qualifying four swimmers for the Olympics — Grimes in the 800, Sullivan in the 1,500, Sims in the 800 free relay and Bowe Becker in the 400 free relay.

“We have put ourselves on a pretty big map, and people want to come here and train,” Aitken said. “Unfortunately, we’re in a situation where we don’t have enough access to facilities to support that type of thing. We have to be very careful about what we do, take care of the local Las Vegas people first and make sure they get what they can from the program. But, obviously, this is a hotbed we’ve got here, and I’d like to capitalize on it and make sure the program continues to get better.”

The club eventually grew to 500 members in 2016, Aitken and his staff developing swimmers who would go on to compete in college and beyond. One Sandpipers product, Cody Miller, won the bronze medal in the 100-meter breaststroke and gold in the 400 medley relay at the 2016 Olympics in Rio de Janeiro.

Aitken said the club numbers have dropped to just more than 300, citing the loss of one facility, pool issues and the COVID-19 pandemic. The last new pool in the valley was built nearly 20 years ago, and Aitken said facilities are showing their wear.

He said a push for newer or updated facilities wasn’t solely about creating elite athletes for his club, noting Sandpipers caters to all levels of abilities and interests. Aitken also made it a point to say he wanted to benefit other clubs as well.

“We’ve made it this far because we’ve been patient and we’ve worked well with people,” Aitken said. “We understand we’re not the only ones here trying to get in a pool to swim in. We share everything and never demand or stomp our feet about needing anything. We want to make these kids better, and we want to give them more opportunities.”

The three Sandpipers female swimmers have more than taken advantage of their opportunities.

Sims, 16, didn’t swim at all until six years ago. When she began to swim competitively, Sims didn’t even know the basics of a proper flip turn.

Grimes, the 15-year-old who became the story of this year’s swimming trials, was getting beaten by her own teammates in practice just six to eight months ago. Even at the trials, Grimes was more likely to be mentioned third among the trio of Sandpipers before her unexpected second-place finish to Ledecky in the 800.

Sullivan, 20, found most of her early success in open-water swimming, and she struggled emotionally after losing her father to esophageal cancer in 2017.

But these three found themselves in the same pool in Omaha.

“Each one of them had battled their way to this point, and it’s been an amazing story,” Aitken said. “You try to write the script. You hope it comes together, and it couldn’t have come together any better than it did. A lot of coaches on the pool deck were like, ‘This is like a 150-year storm. You just don’t see it.’ ”

Next those swimmers will represent the U.S. in Tokyo. They said they are ready for the experience.

They also know plenty of work remains before the swimming portion of the Games begins July 24.

“Coach Ron stands out from other coaches because he always thinks 10 steps ahead,” Sullivan said. “Not only 10 steps ahead, but I feel like when a lot of people look ahead, they kind of skip the minute steps. Ron has plan for not only every single step, but for every subplot set in place.”