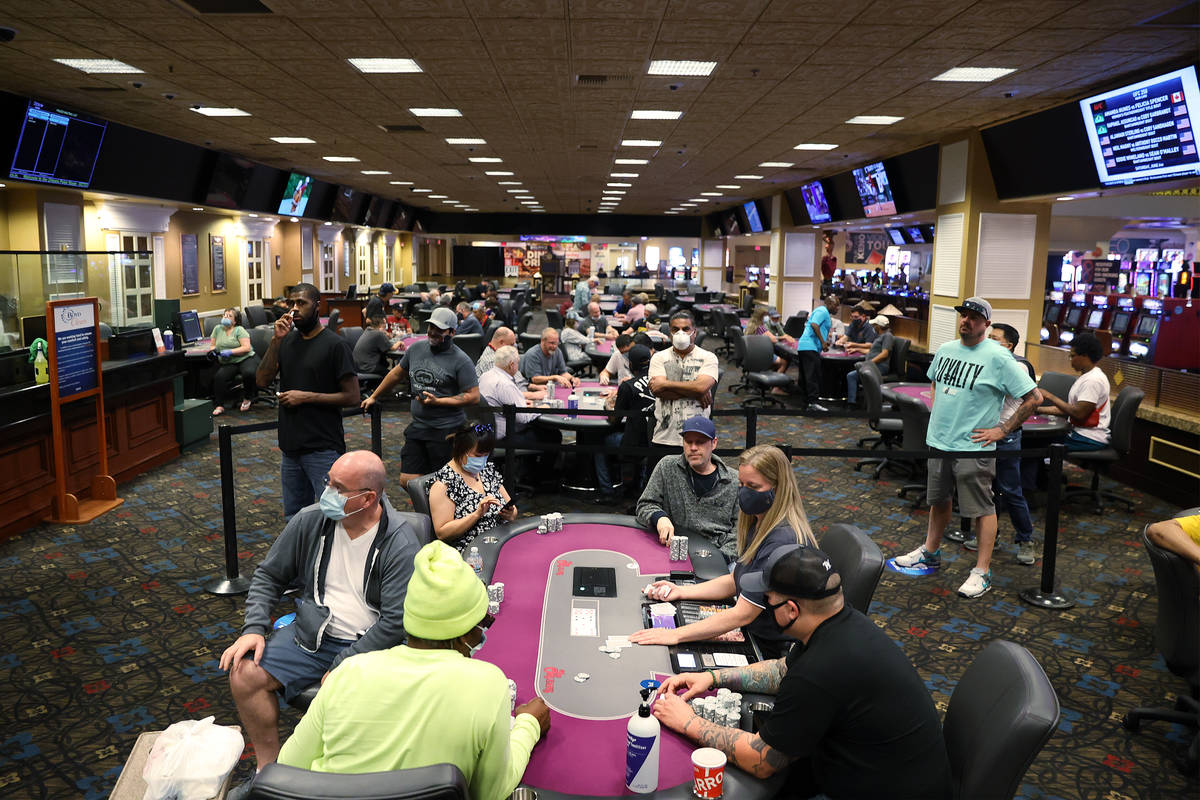 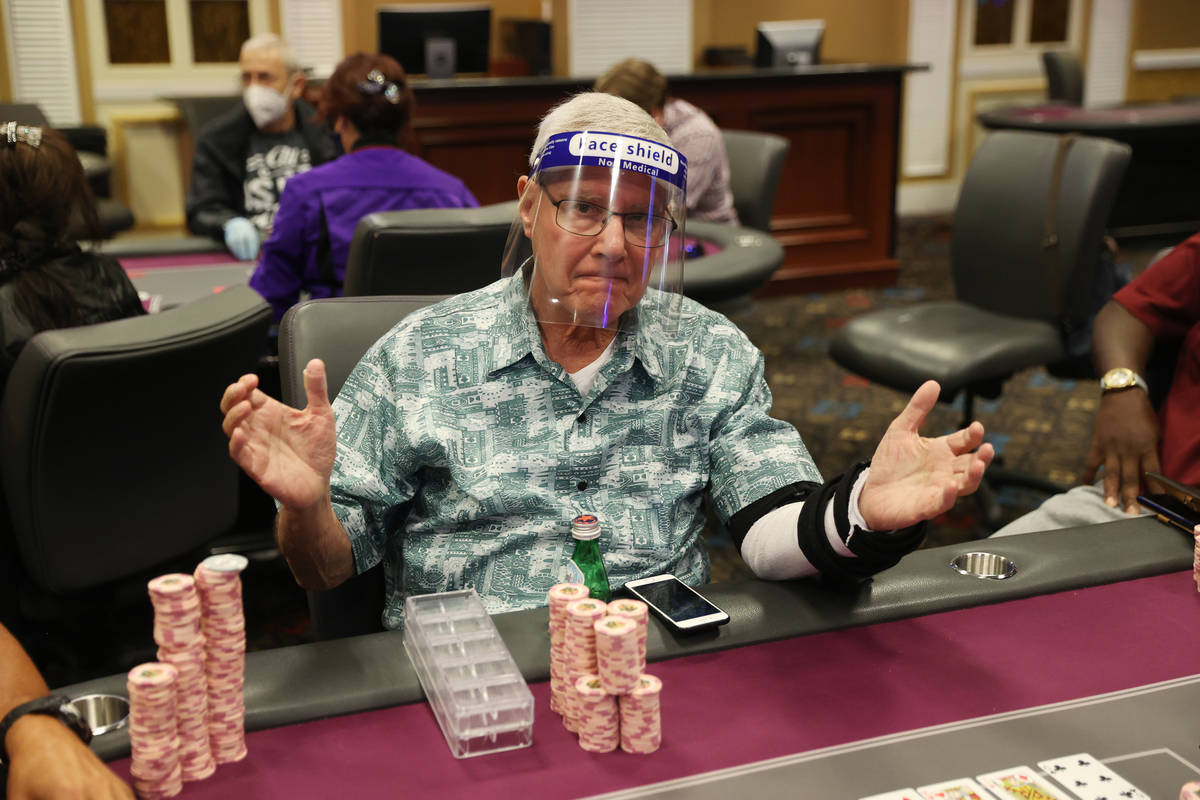 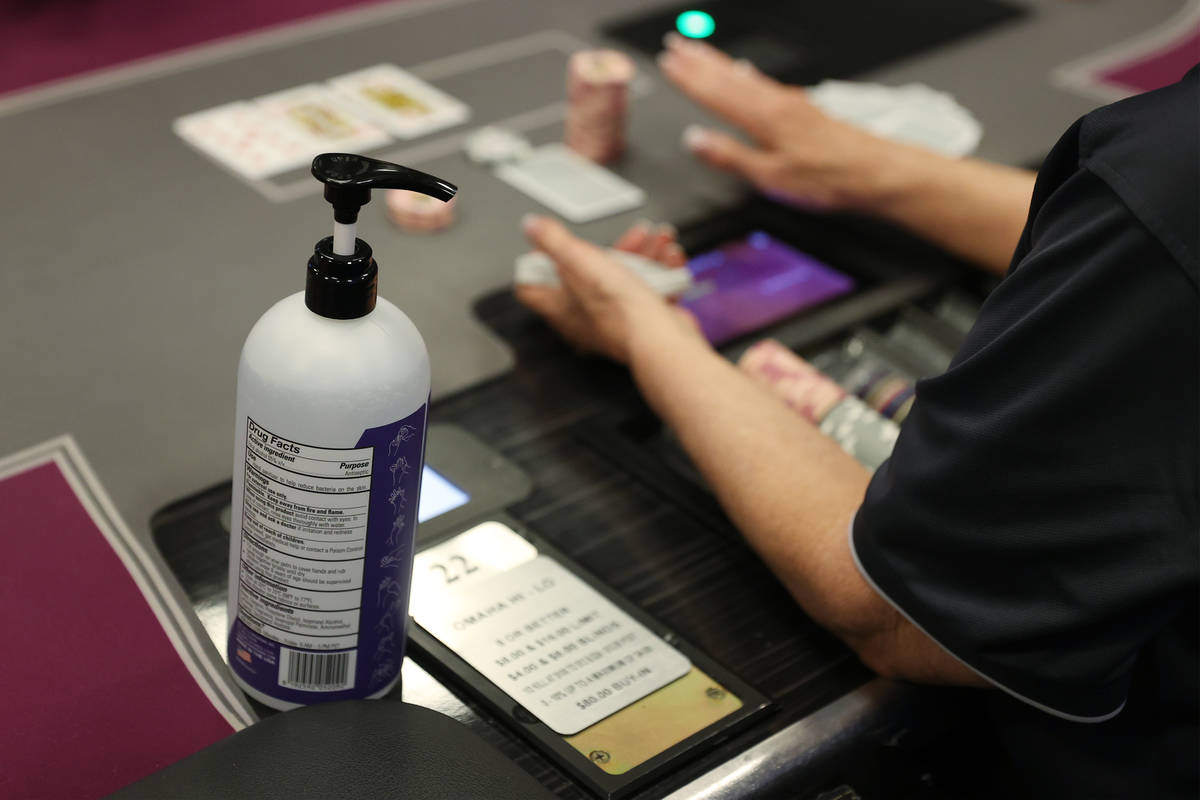 A hand sanitizer bottle sits on a poker tables during the first day of reopening at The Orleans hotel-casino in Las Vegas, Thursday, June 4, 2020. (Erik Verduzco / Las Vegas Review-Journal) @Erik_Verduzco 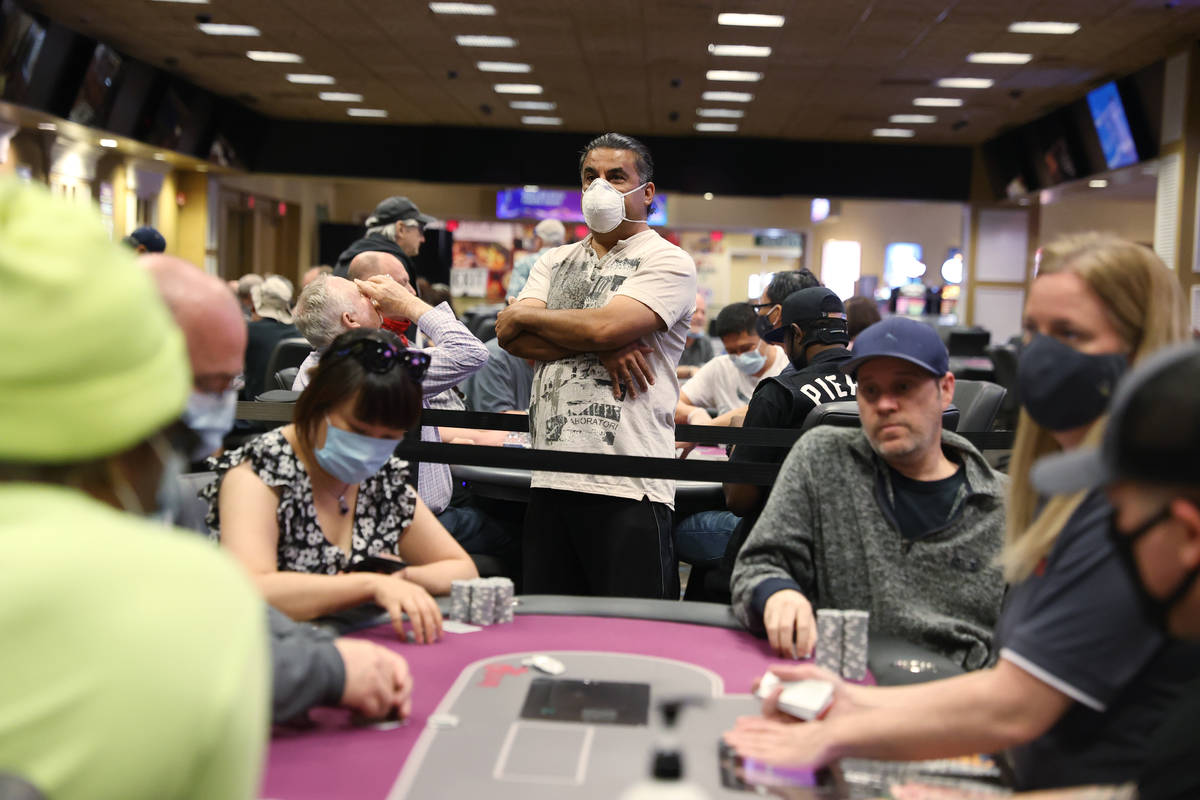 Douglas Roussard of Las Vegas waits in line to enter his name to play poker during the first day of reopening at The Orleans hotel-casino in Las Vegas, Thursday, June 4, 2020. (Erik Verduzco / Las Vegas Review-Journal) @Erik_Verduzco 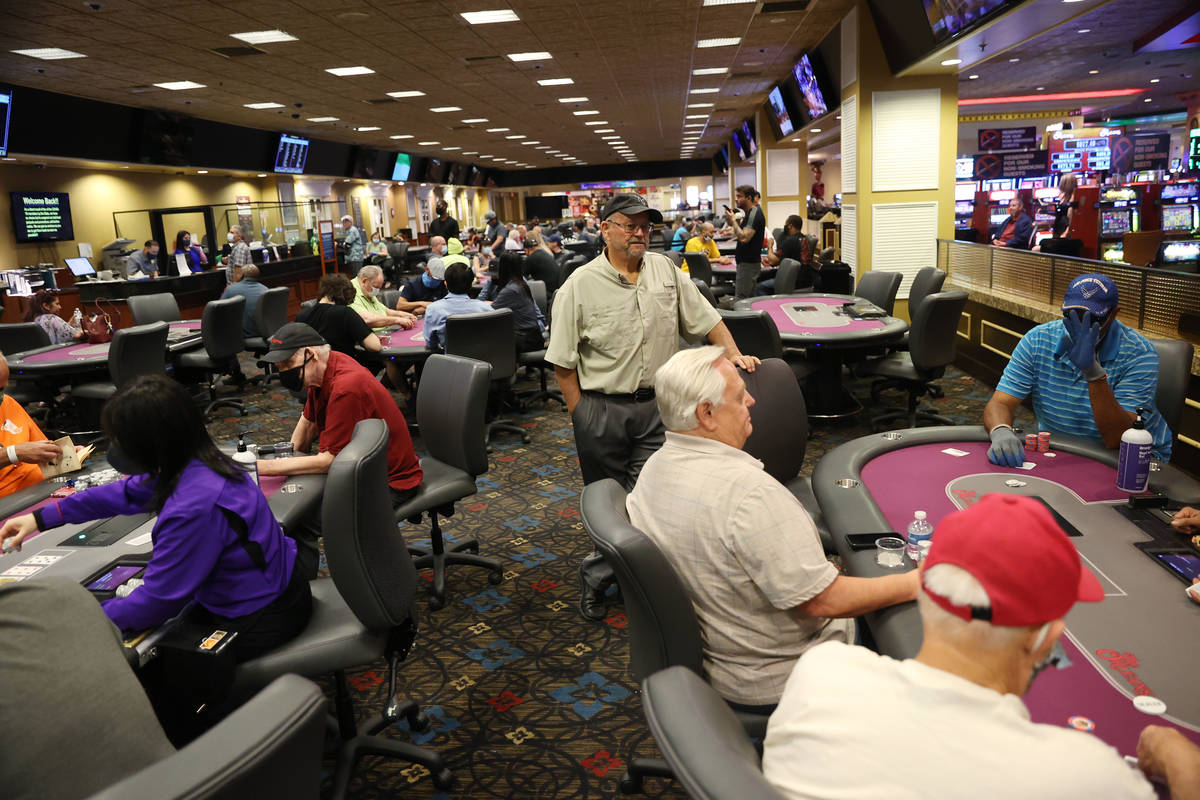 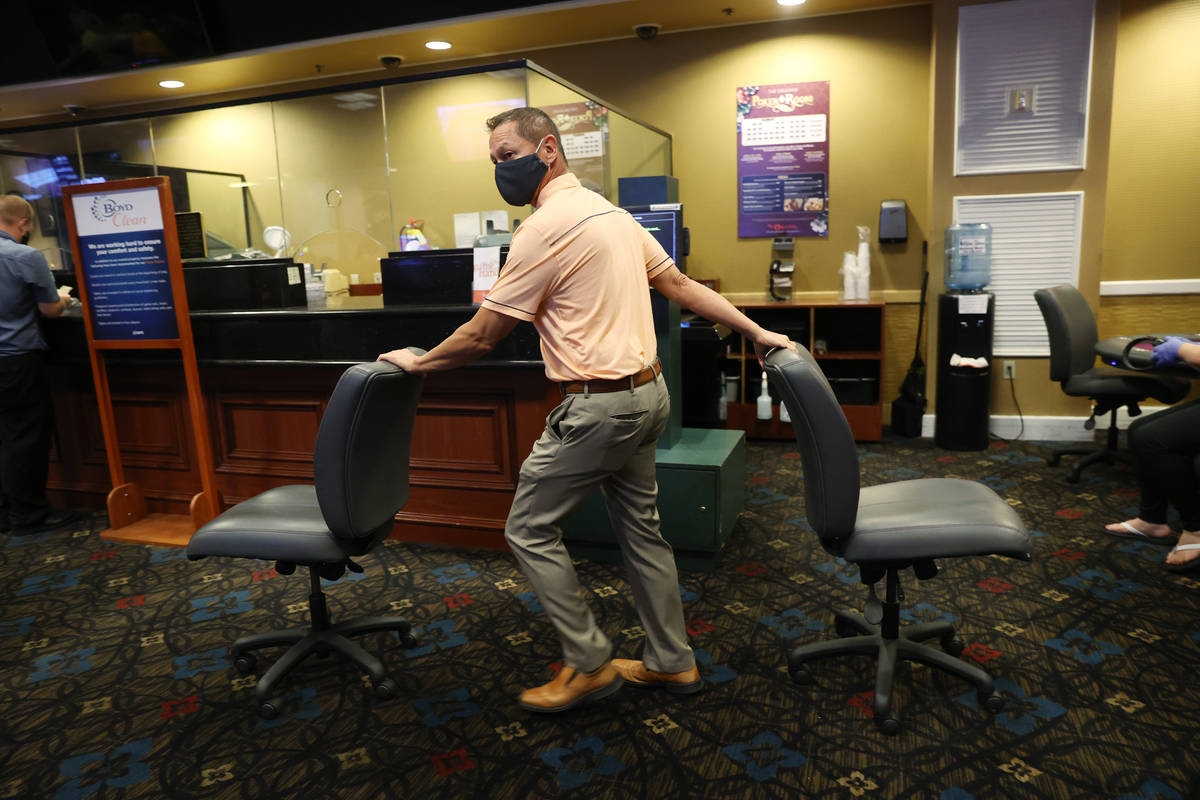 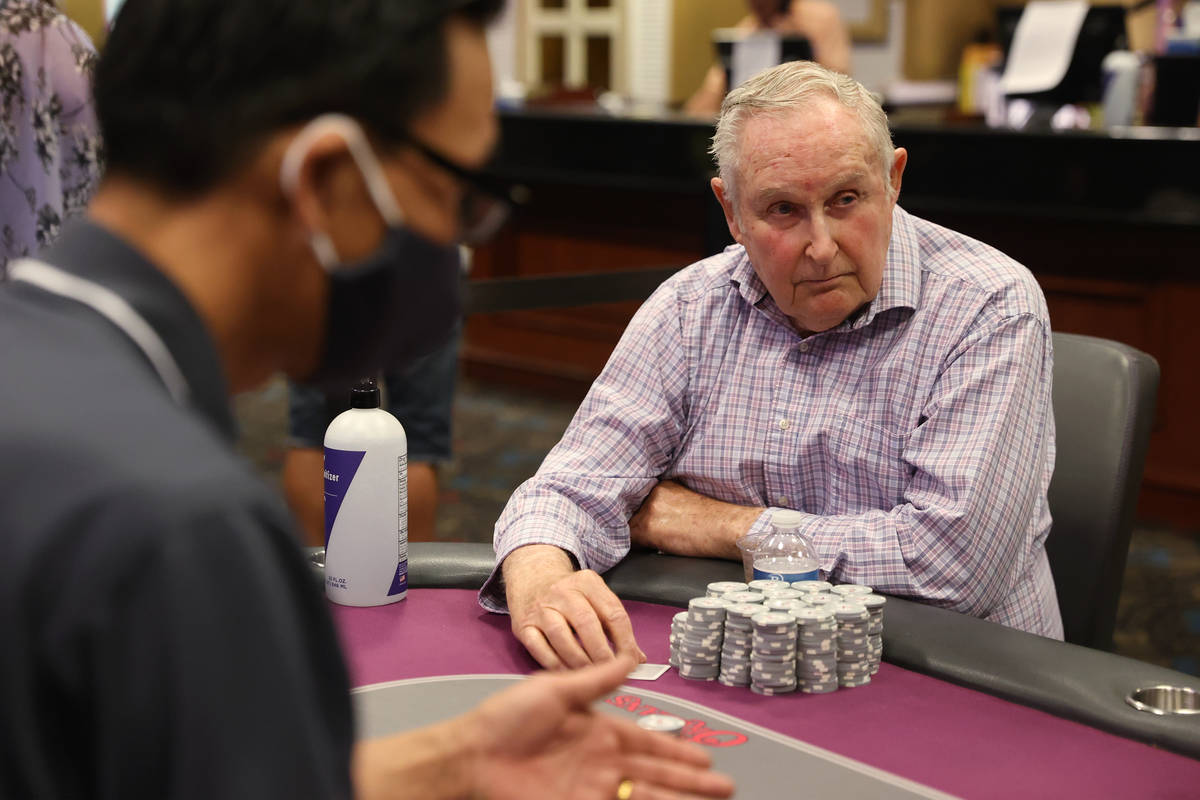 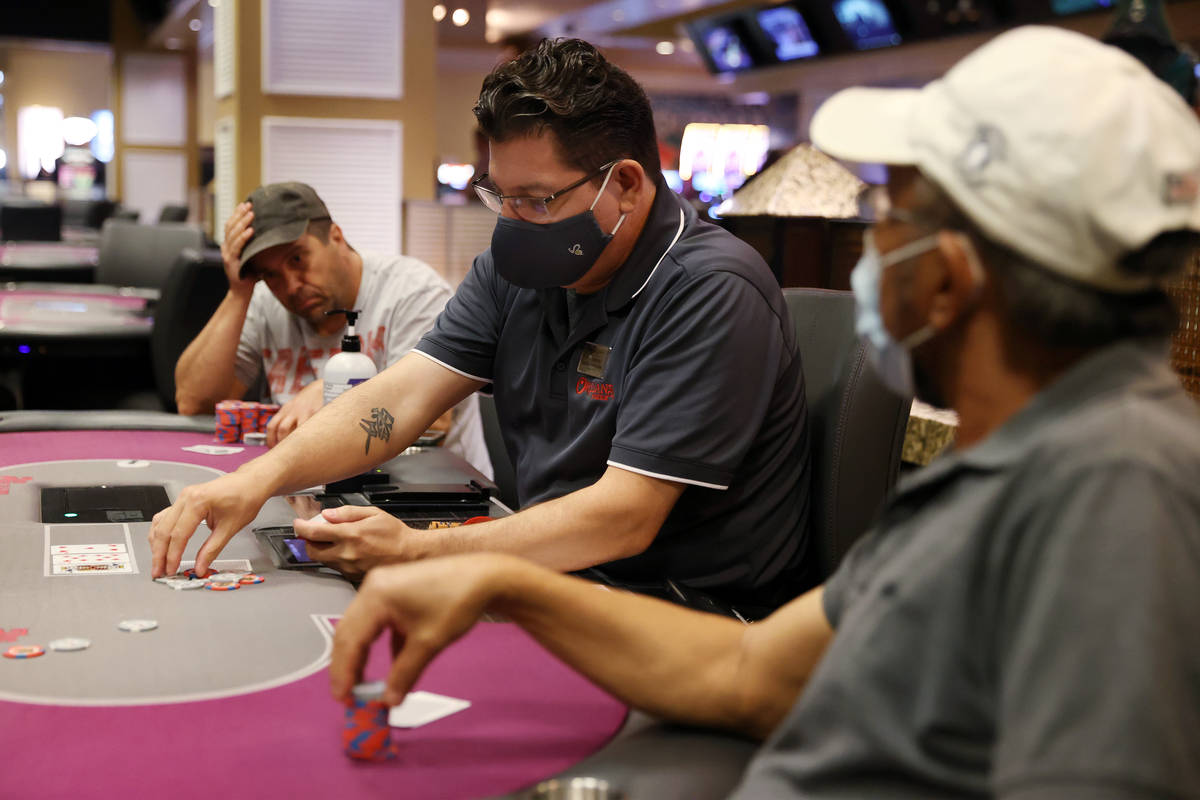 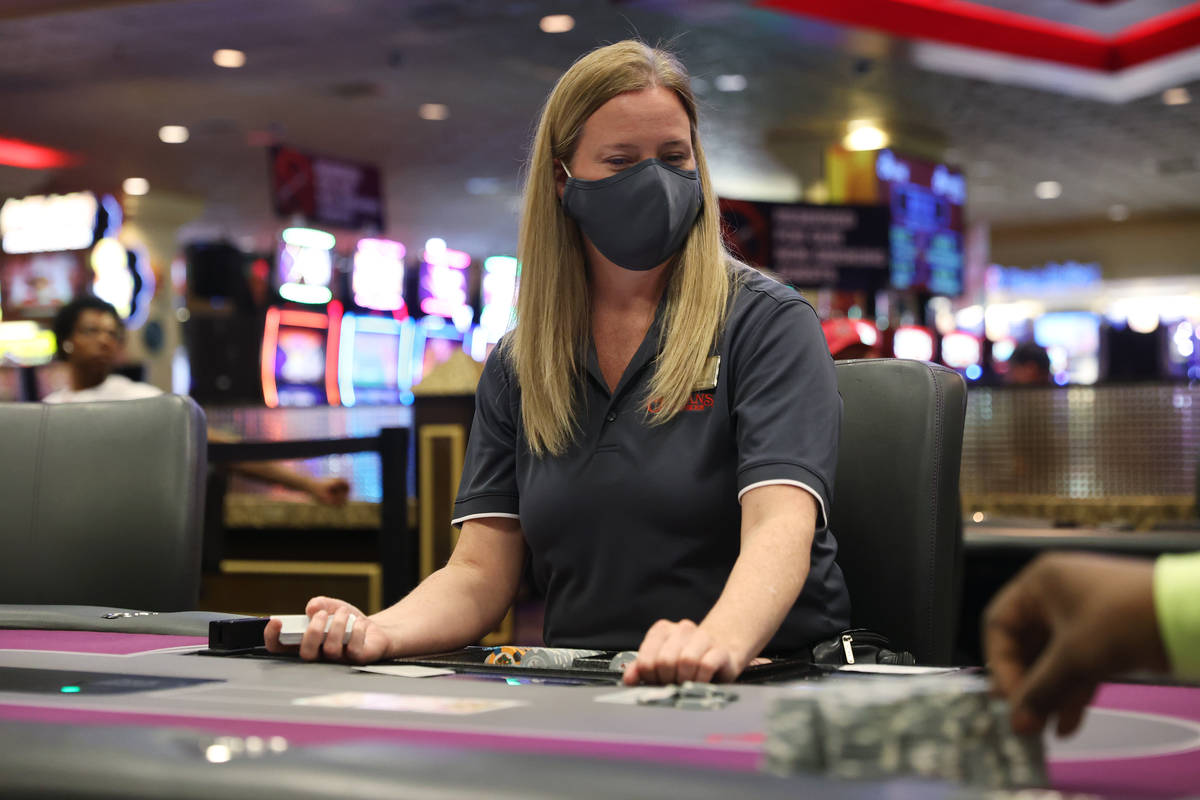 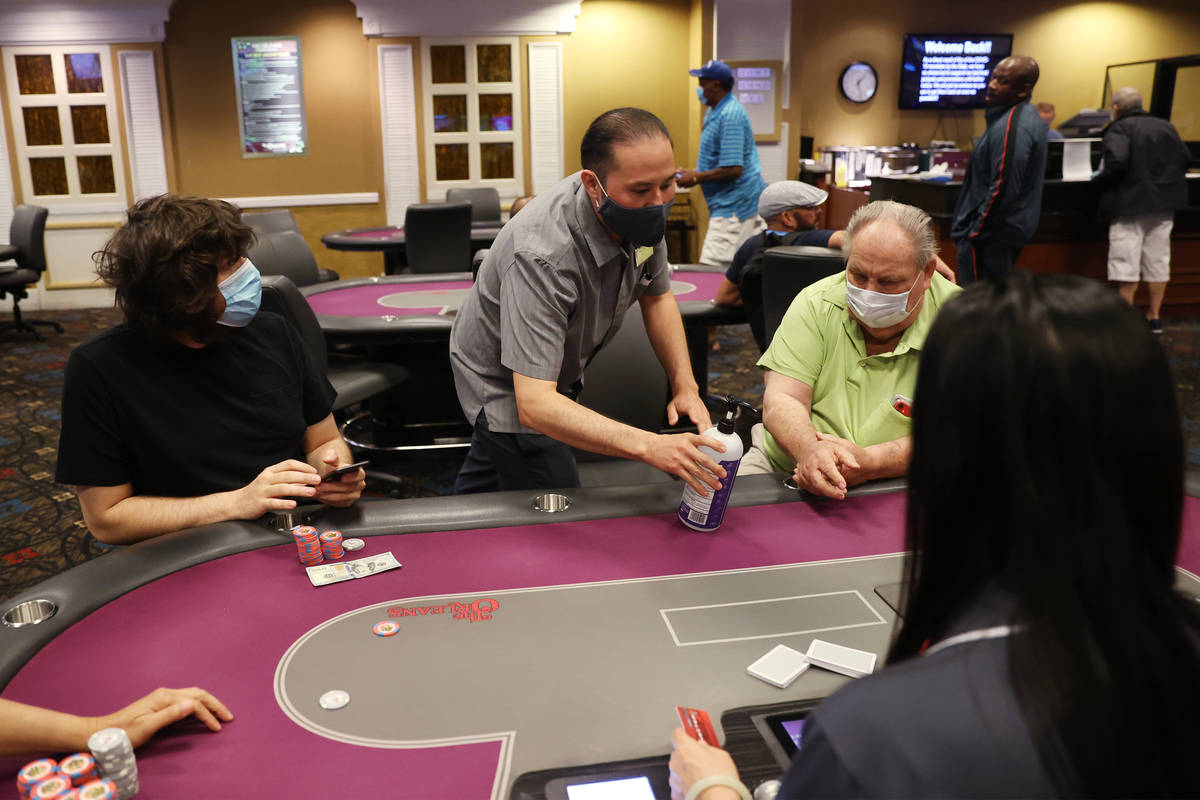 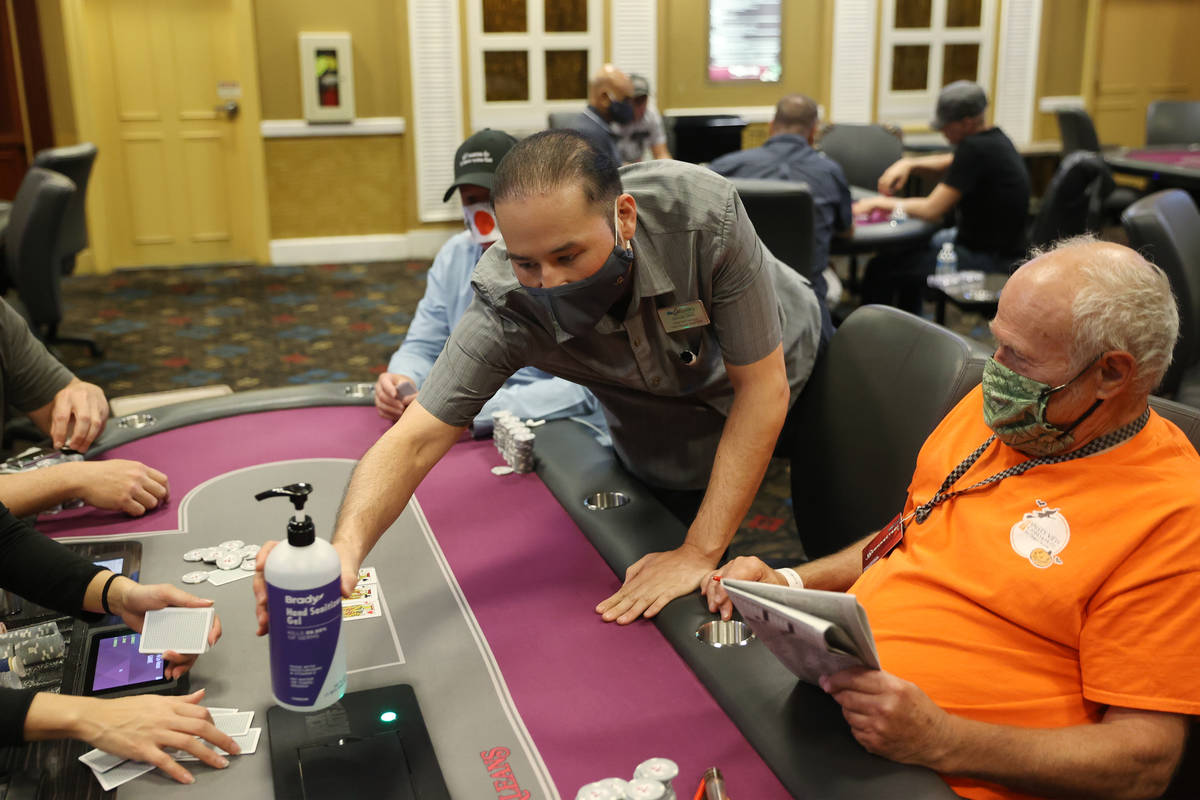 For poker players, the math is simple. Five is greater than four — and they’re both definitely greater than zero.

The Orleans and South Point brought live poker back to the Las Vegas Valley with the reopening of their rooms Thursday. The Venetian plans to open its room Friday.

The games were originally slated to be played four-handed, per social distancing guidelines from the Gaming Control Board. The South Point gained approval Wednesday to play five-handed, and The Orleans followed suit a little after 1 p.m. Thursday.

The players at The Orleans cheered when poker room manager Garrett Okahara announced that a fifth player could join each table, and he began moving the extra chairs into place. Standard casino poker games have nine to 10 players at each table.

Despite the short-handed games, interest was high at both rooms. The Orleans was running 10 to 13 tables throughout the day with sometimes more than 100 players on the waiting list. The South Point had as many as 15 games going with more than 30 players waiting.

“There’s a big segment of the poker market that just likes to play cards, and they like to come out and they like to gamble and intermingle and have some fun,” Okahara said. “And that’s what we’re seeing today.”

“We were planning on being busy. We knew there was a lot of pent-up demand,” he said. “People haven’t had somewhere to gamble.”

The Orleans and South Point opened their rooms at 8 a.m. Thursday. The Orleans is ending play at midnight daily for now, but the South Point will stay open 24 hours a day.

The games are being played with a reduced rake (house cut) of $3 per hand. The South Point is also taking $1 for its promotions, including a high hand bonus. The Orleans has suspended its normal $2 per hand for promotions, Okahara said.

Safety precautions abound in both rooms, though masks are not required. The Orleans is changing the decks every two hours. No eating is allowed at the table, and hand sanitizer is available all over the room.

Sanborn pointed out that the spaciousness of his room lends itself to social distancing, as players can easily walk between tables without brushing up against each other.

“We want to provide a safe place to gamble,” he said. “We know we have a safe, clean environment that’s safer than any home game.”

The South Point is hosting single-table (five-player) tournaments as soon as enough players are signed up. The Orleans has suspended its daily tournament slate until the seating capacity expands, Okahara said.

Steve Monroe, 33, of Las Vegas was waiting to get into a No-limit Hold’em cash game at The Orleans on Thursday afternoon after already splitting the prize pool in a single-table tournament earlier at the South Point, he said.

He was wearing a mask and joked that it was a “better way to hide your tells” at the table.

He said he enjoyed playing short-handed but knew that most players don’t, and he was eager to see what the pandemic might mean to the poker options in Las Vegas, including whether some rooms would open back up at all.

The changes “probably aren’t permanent, but it will be like this at least for a while,” he said.

The Venetian is the only other room so far that has announced that it will reopen. The others have said they are waiting until social distancing restrictions are loosened.

Okahara said he saw a lot of friendly faces in the room, from players eager to get back in action and staffers wanting to get back to work.

“Every one of them has come in and just (said), ‘Hey, how’s it going. We missed you. Hey, we’re so happy to be back,’” he said. “The response has been literally overwhelming. … We’re so excited and happy to be back to work and doing what we all love to do.”