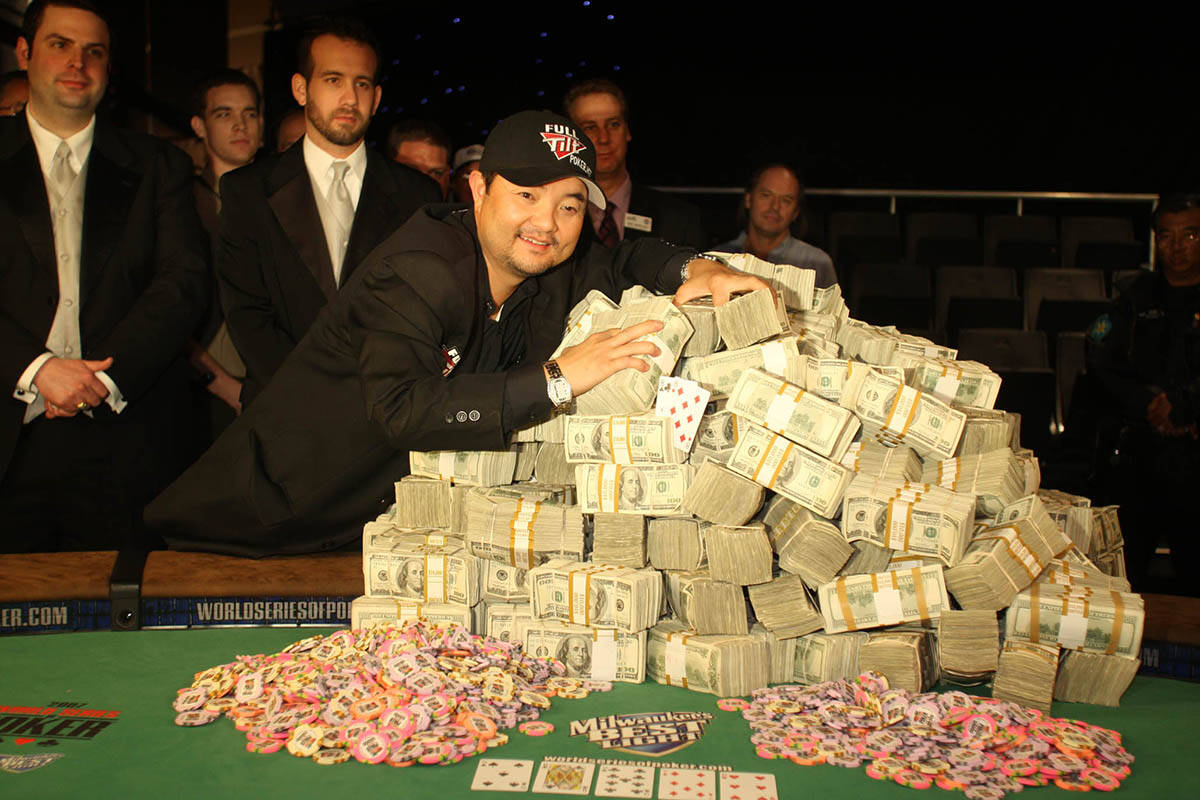 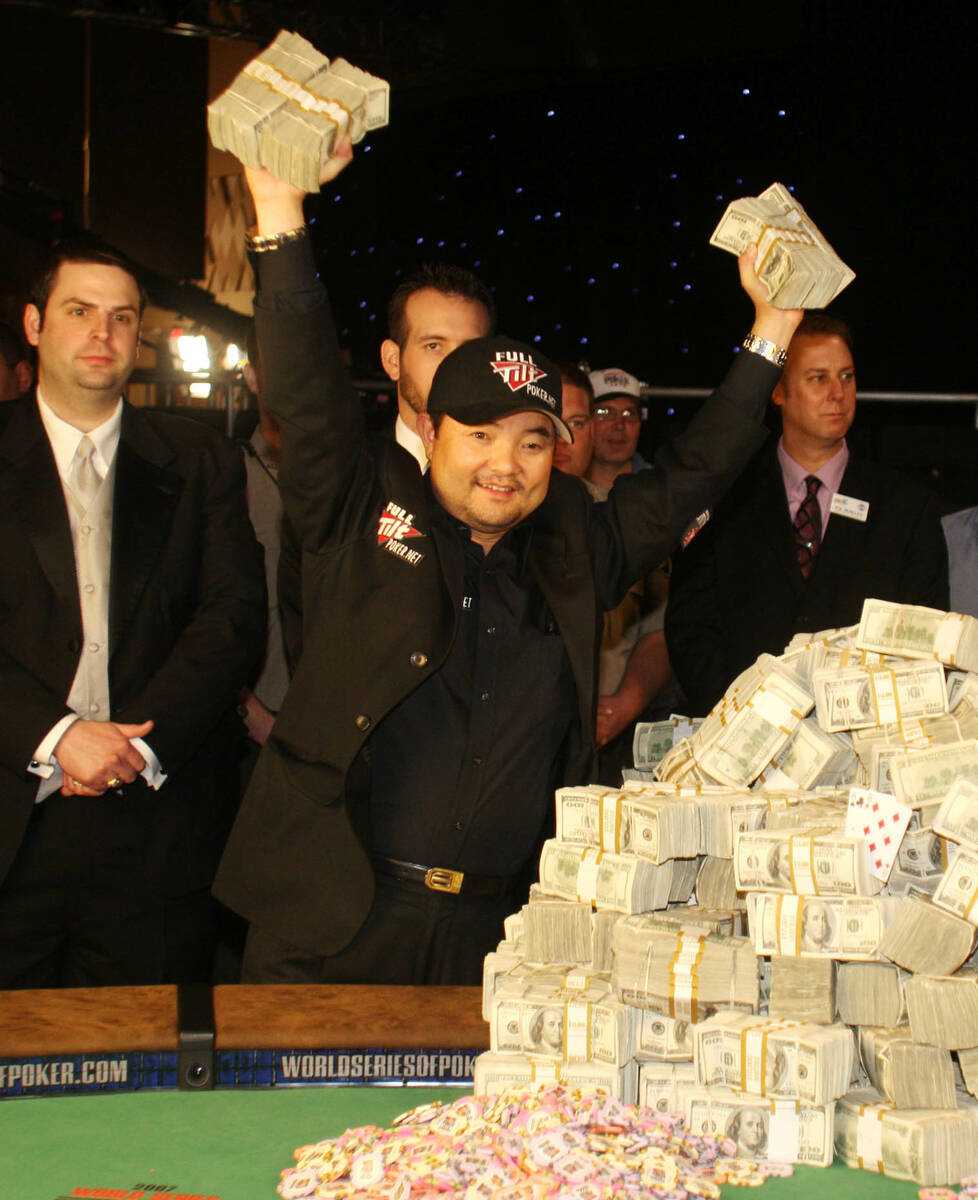 Jerry Yang of Temecula, Calif., holds part of his $8.25 million prize above his head after winning the World Series of Poker Championship at the Rio hotel-casino Wednesday, July 18, 2007, in Las Vegas. Yang outlasted a field of 6,358 players to win the $10,000 buy-in no-limit Texas Hold'em world championship event. (Las Vegas Review-Journal/File) 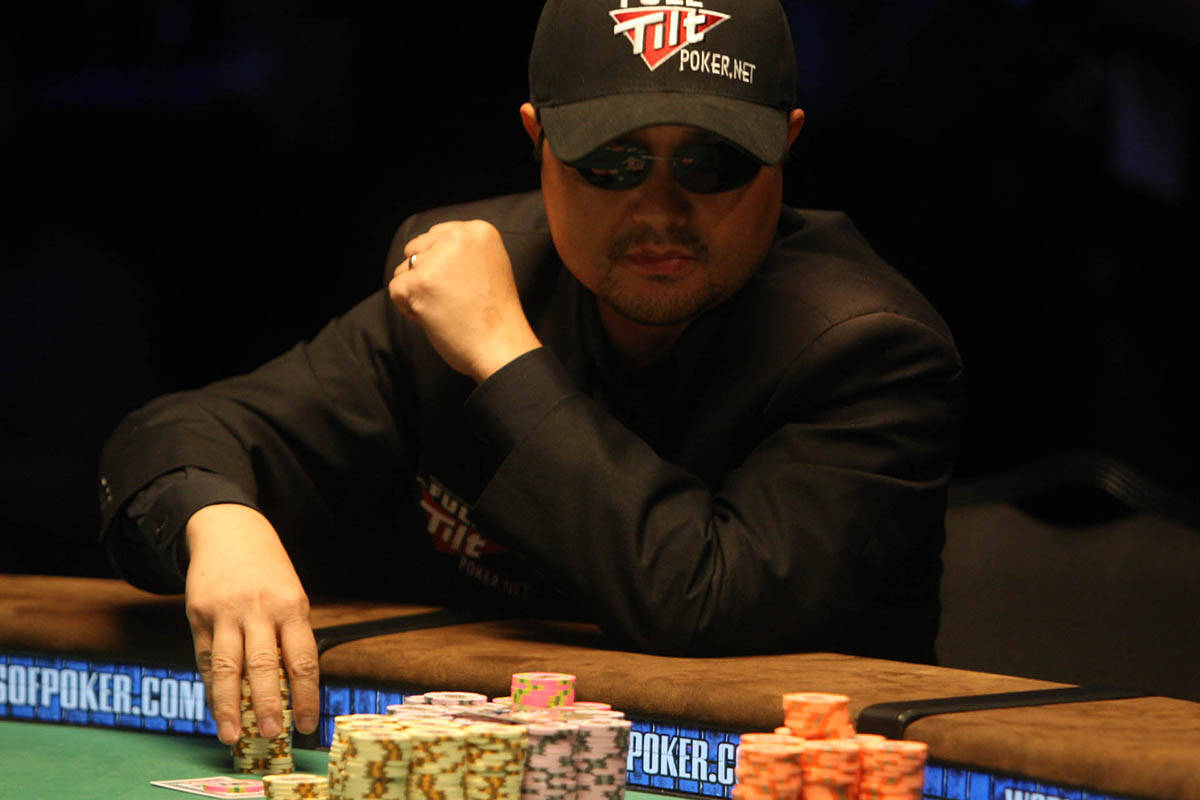 Poker player Jerry Yang of Temecula, California, handles his chips while playing at the final table during the World Series of Poker main event at the Rio hotel-casino Tuesday July 17, 2007, in Las Vegas. (Las Vegas Review-Journal/File) 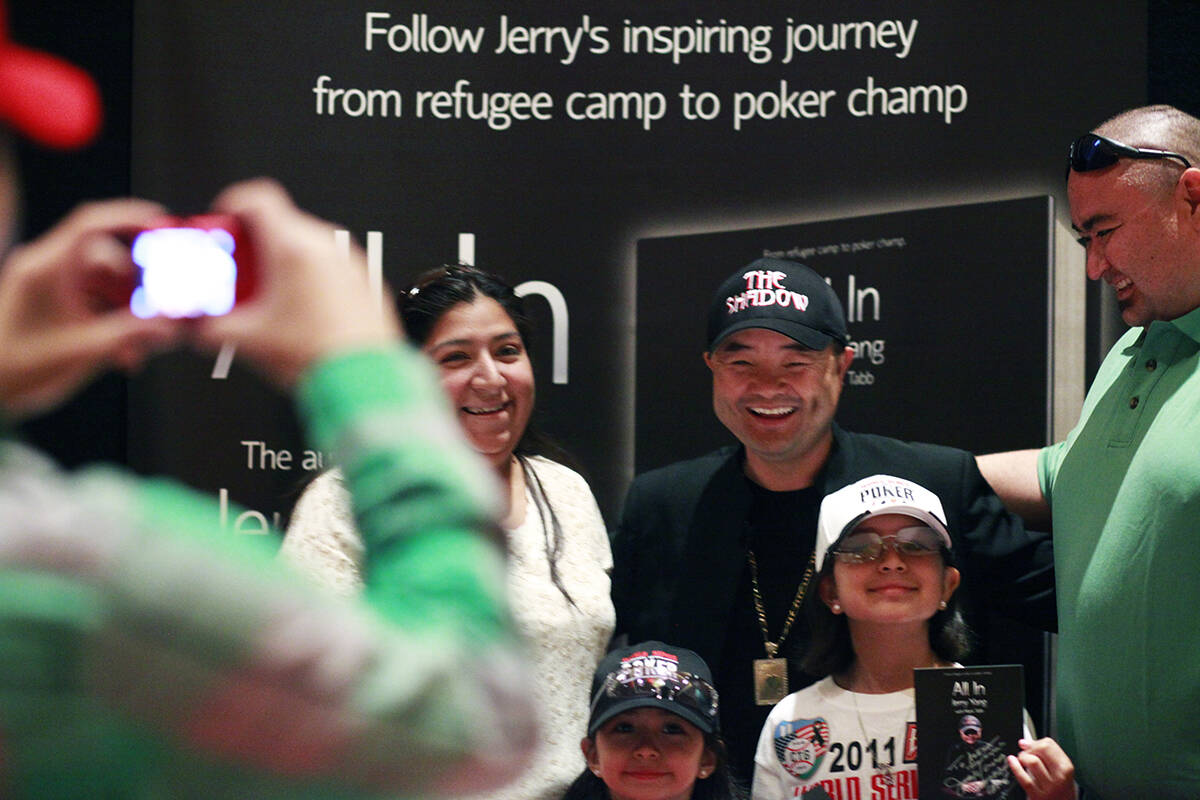 2007 World Series of Poker Main Event Champion Jerry Yang poses for a picture with, from left, Beatrice Badillo, Arianna Fisher, 5, Alexa Fisher, 8, and Justin Fisher of Cibolo, Texas, at Yang's book signing for his new book "All In" in Las Vegas' Rio Hotel and Casino Wednesday afternoon, July 6, 2011. Alexa Fisher is an 8-year-old poker player herself, and this is the family's second time meeting Yang. (Las Vegas Review-Journal/File) 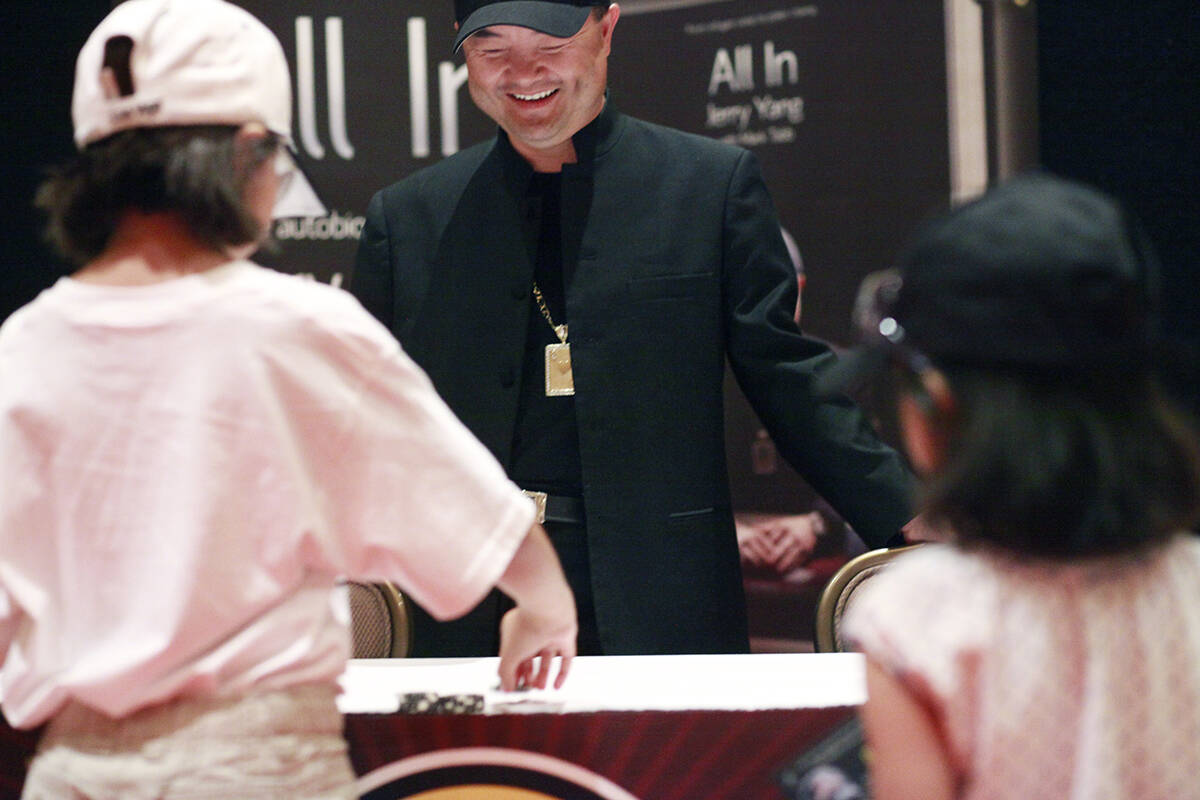 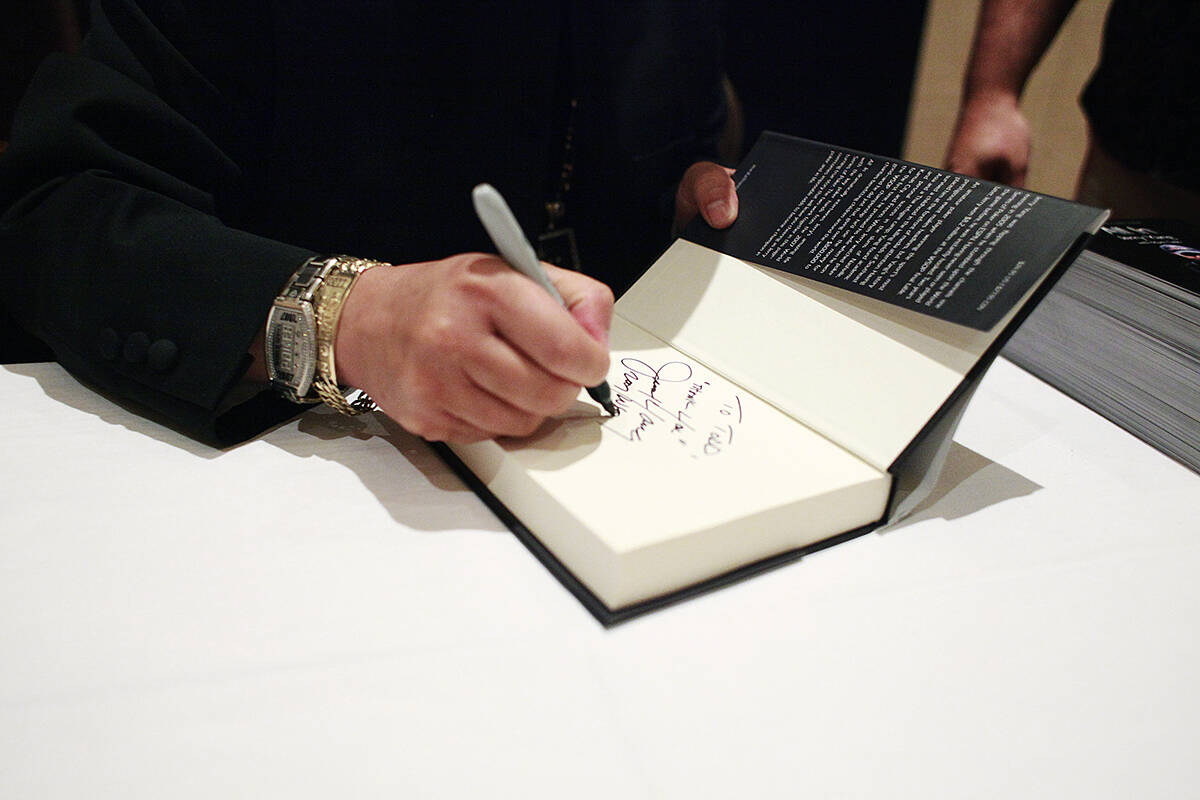 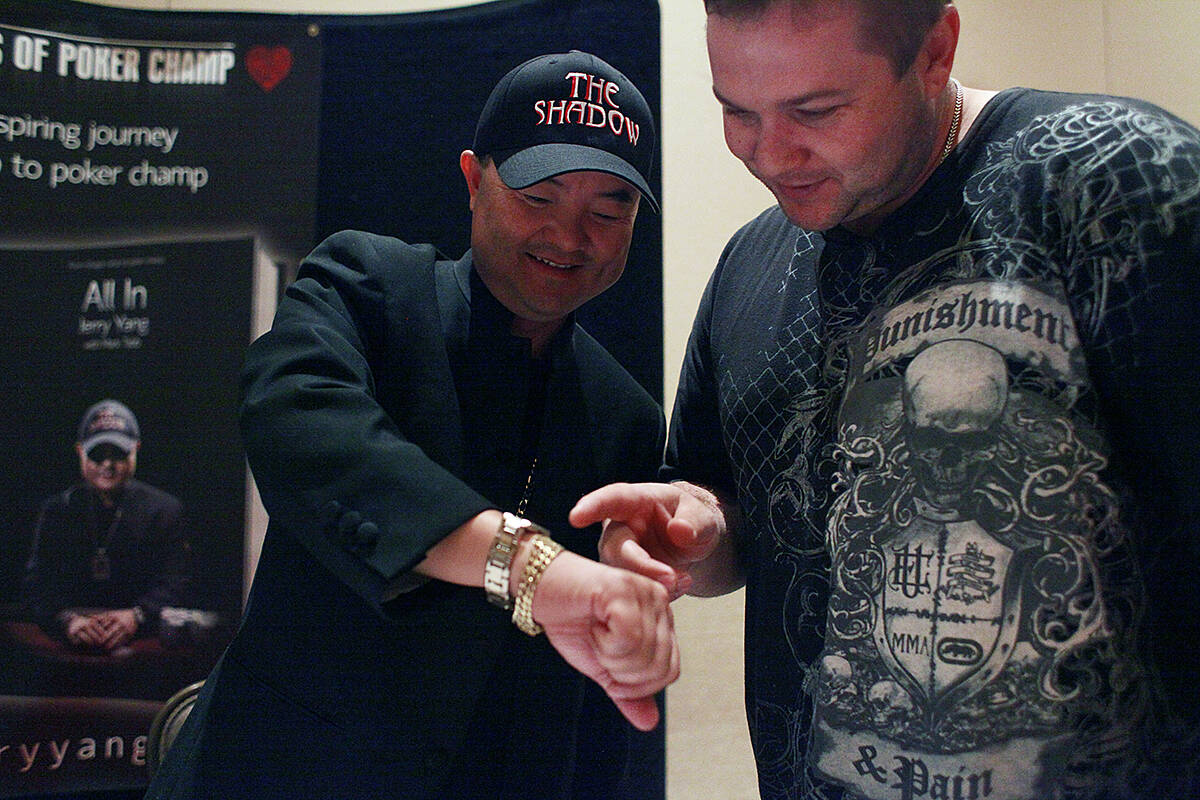 He has been described in the Review-Journal as “poker’s accidental world champion.”

But in the wee hours of July 18, 2007, Jerry Yang — a Laotian immigrant and married father of six from Temecula, California — outlasted the World Series of Poker’s Main Event field of 6,358 players over 11 days at the Rio to win $8.25 million and the coveted bracelet.

Before big win, Yang had only played for about two years, and even then, it was for minor stakes in the poker rooms of Native American casinos near his home. The RJ reported that he won his entry into the $10,000 buy-in no-limit Texas Hold’em world championship event through a satellite tournament, and his investment had been $225.

Yang had the eighth-largest chip stack when the final table started, according to the RJ story, but he took the lead two hours into play. He never relinquished that lead through the early morning.

Yang, a born-again Christian, said he sought divine intervention more than a few times during the nearly 16-hour finale.

“I asked God to help me win. I told him that I could make my family and others that are less fortunate happy with this money,” he said, admitting that he often dropped to his knees in prayer in the restroom during breaks. “I give thanks to God. I won because he believed in me.”

Before the final table began, Yang said he would donate 10 percent of his winnings to three charities: the Make-A-Wish Foundation, Feed the Children and the Ronald McDonald House. Later he said he would give money to his alma mater, Loma Linda University.

In a 2011 story in the RJ, Yang still said he concentrates on smaller buy-in games, avoiding the big-stakes contests. He also promoted his autobiography, “All In: From Refugee Camp to Poker Champ.”

According to CardPlayer.com, the 2007 victory remains Yang’s lone tournament win on the pro circuits. At this year’s tourney, Yang finished in 501st in the $1,500 No-Limit Hold’em Monster Stack, good for $3,610.