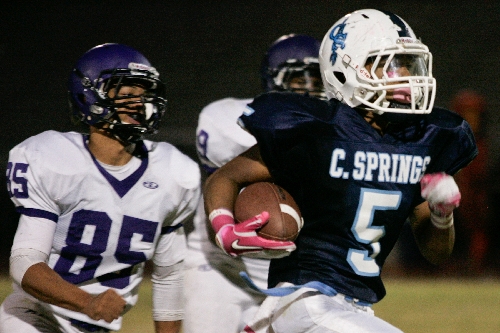 Canyon Springs running back Donnel Pumphrey did everything he could to help his team win Friday.

He accomplished that goal, but only after teammates made his task a bit more difficult.

The fifth-ranked Pioneers squandered a big first-half lead with a flurry of mistakes, but hung on for a 29-21 home victory over Silverado.

Pumphrey rushed for 164 yards and two touchdowns on 15 carries, but he could have had a much bigger night considering he had three touchdowns negated by penalties.

Canyon Springs coach Hunkie Cooper had little praise for his team, aside from Pumphrey.

“He plays hard,” Cooper said. “That’s the way he practices. He’s so speedy, and he brings something high school kids just don’t bring.”

The mood was upbeat on the Pioneers’ sideline early, as Pumphrey scored on a 49-yard run and Bradley Alexander connected with Devon Neal for a 17-yard TD pass to make it 14-0 in the first quarter.

Instead, things began to unravel. The Pioneers (3-2, 1-0 Northeast League) turned the ball over on downs deep in Skyhawks territory, allowing Silverado to score on a 1-yard plunge by Alex Cater to end the half.

Silverado succeeded with another onside kick moments later, but eventually fumbled to end the drive.

Pumphrey saved the day with a 35-yard touchdown run late in the third quarter to push the Pioneers’ advantage to 29-15.

Though the Skyhawks took advantage of a Pioneers fumble to cut it to 29-21 on a 33-yard touchdown pass from Marquise Edward to Alek Aragon with 2:09 remaining, their final onside kick was recovered by Canyon Springs, which ran out the clock.

Alexander completed 5 of 6 passes for two touchdowns for Canyon Springs.

Ryan Smith returned the opening kickoff 95 yards for a touchdown and caught a 50-yard TD strike from Jarrett Solomon.

Gorman’s defense registered a safety and held Cimarron to 83 yards.

■ Centennial 65, Desert Oasis 22 – At Desert Oasis, Brandt Honda returned a punt and an interception for touchdowns, and the No. 4 Bulldogs (5-1, 2-0 Southwest) rode defense and special teams past the Diamondbacks (1-5, 0-2).

Centennial led 42-7 after scoring 21 points in a 1:07 span of the second quarter. Austin Turley scored on a 10-yard keeper, Coby Newton ran for a 7-yard touchdown following Haikeem Arnold’s fumble recovery, and Honda capped the surge with a 20-yard interception-return TD.

Lopez was 9 of 20 passing for 126 yards, and threw two touchdown passes to Kyler Chavez, who made four catches for 75 yards.

■ Basic 53, Eldorado 0 – At Basic, Devonte Boyd celebrated his birthday by catching two TD passes and making an interception, leading the No. 9 Wolves (4-1, 1-0 Southeast) to a homecoming victory over the Sundevils (1-4, 0-1).

Antraye Johnson rushed for 136 yards and three scores, and returned a punt 75 yards for a touchdown. Boyd made seven catches for 85 yards, and Basic also got interceptions by homecoming king Anthony Owens and Dylan Green, the latter returning his 24 yards for a TD.

Dixon finished with 301 all-purpose yards, including TD catches of 71 and 45 yards from Drew Doxtator, who threw for 471 yards and four scores. Dixon also ran for a 15-yard TD.

Conner Mortensen, who finished with 133 yards on 12 carries, added TD runs of 5 and 30 yards, and Sean McConnell returned a punt 85 yards for a score.

Xavier Steel scored on a 48-yard run for Boulder City.

Mojave (3-4, 2-1) scored in OT on Arave’s 15-yard pass to Tyreek Carter on third-and-goal. But Arave was stopped for no gain on the tying 2-point attempt.

After the teams went to overtime tied at 12-all, Cheyenne scored first on Lewis’ 1-yard run and conversion run. The area’s leading rusher also scored on runs of 2 and 7 yards in the first half and finished with 128 yards on 28 carries.

Billy Murphy scored on a 39-yard run for Mojave and caught a 20-yard TD pass from Arave, who finished 9 of 15 for 115 yards. Lorenzo Guerrero’s 58-yard fumble return set up Murphy’s TD catch.

Travis Nofoa was 6 of 10 passing for 107 yards and a TD, and Tim Hough led the Jaguars with three catches for 57 yards and a score.

For Virgin Valley, Cristian Aguirre was 7 of 19 for 157 yards and two TDs. Tyson Teerlink made five catches for 86 yards.

Chaparral compiled 350 yards on the ground, led by Antonio Thomas with 180 yards and two touchdowns on 20 carries.

Sherman Nash led Sunrise Mountain, rushing for 174 yards and a TD on 22 carries.

Julian rushed for a 30-yard TD in the first quarter, and his 31-yard burst in the third quarter gave Legacy a 14-0 lead.

Bonanza senior quarterback Brett Doyle capped a 77-yard drive with a 5-yard touchdown keeper, but Julian answered only two plays later with a 65-yard TD run down the left sideline.

LaMarus Williams made five sacks for Legacy, which held the Bengals to 164 yards, all through the air.

Sierra Vista led 10-7 before Smith put Shadow Ridge in control. Having thrown a 51-yard TD pass to Marquise Evans, he ran for two 1-yard scores in the first half and had TD runs of 65 and 3 yards in the third quarter. Chris Goodie also caught a 15-yard TD pass.

Two of Sierra Vista’s scores came on kickoff returns, an 80-yarder by Deyon McKinney and an 87-yarder by Maliek Broady.

Kareem Warren added 102 yards and a touchdown on the ground for Clark, which scored a TD in each quarter.

Benson completed 12 of 14 passes for 210 yards, including TDs of 17 and 58 to Anthony Pryatel-Farmer and 15-yarders to Sean Bischel and Vinny DeGeorge.

Pahrump Valley was led by Dalton Beighley with 92 yards receiving on four catches, and Dustin Dillon made an interception.

The Meadows’ Chisup Kim caught an 8-yard TD pass from Jacob Gleason and ran for a 1-yard score to help the Mustangs build an 18-6 halftime lead. Marrs and Bickart scored on runs of 1 and 42 yards, respectively, in the second half.

The Meadows’ Robert List made three catches for 38 yards and returned a fumble 1 yard for a TD. Freshman Tommy Halkyard added a 34-yard field goal.

The interception return is believed to be a state record.

Thomas scored on runs of 20, 64 and 65 yards. He hooked up with Dwayne James on scoring strikes of 55 and 18 yards to help Spring Mountain build a 46-6 halftime lead. James also made two interceptions.

For Sandy Valley, Darby Wadley had a 1-yard TD run and a 50-yard touchdown pass to Jerremy Hall.