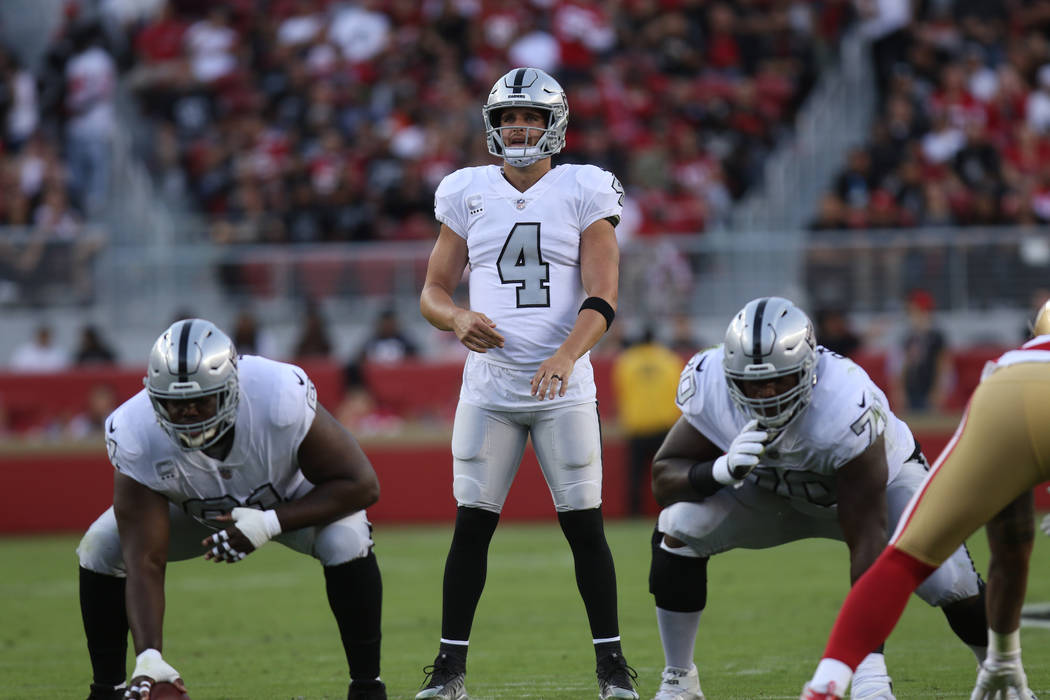 ALAMEDA, Calif. — The Raiders offense has a long way to go.

That’s part of the problem.

Field position has been an issue largely all season. Eight games into it, the unit has started three of 80 drives in opposition territory. All three occurred in the team’s lone win, 45-42 in overtime on Sept. 30 versus the Cleveland Browns.

All 65 drives in the Raiders’ seven losses started behind the 50-yard line.

“How we approach everything with the players is you control what you can control,” offensive coordinator Greg Olson said. “Our job every time we take the field is to score points, whether it be field goals or touchdowns. That’s their mindset, whether it has to be an 80-yard drive or a 30-yard drive.

“It’s unfortunate we haven’t been able to have many of the short ones. We’ll control what we can control. Whatever field position we’ve got before we take the field, the mindset is to score points.”

The Jacksonville Jaguars and Tampa Bay Buccaneers have started a league-low two possessions in opposition territory. In the first of those two drives, the Jaguars lost a fumble on their opening play of the series. Their other possession culminated in a touchdown. Tampa Bay threw an interception on one drive and scored a touchdown on the other.

The Raiders have fared better.

They’ve scored each time — two touchdowns and one field goal — when presented a short field. Still, they are the only NFL team without multiple games in which they began at least one offensive drive in opposition territory. For the season, they on average have taken possession at their own 25.3-yard line. Only the Bucs and Pittsburgh Steelers are worse at 25 and 25.2, respectively.

In its Week 4 win, the Raiders had an average start at its own 34.9-yard line.

In the seven losses, the figure drops to the 22.7-yard line.

Defense and special teams, of course, have a profound influence on field position. The Raiders forced four turnovers and recorded two sacks in their Week 4 win over Cleveland. This remains their only game in 2018 with multiple sacks or multiple takeaways.

Oakland totaled five sacks and two takeaways combined in its other seven games.

■ Camp Fire, a wildfire based about 150 miles northeast of Alameda, affected air quality Thursday at practice. Practice began around 1:30 p.m., as ash fell from a smoke-filled sky. According to the San Francisco Bay Area Air Quality Management District, Alameda had an air quality index of 116 at 2 p.m. and 184 at 3 p.m. That is deemed “Unhealthy for Sensitive Groups” and “Unhealthy,” respectively, per AirNow.gov.