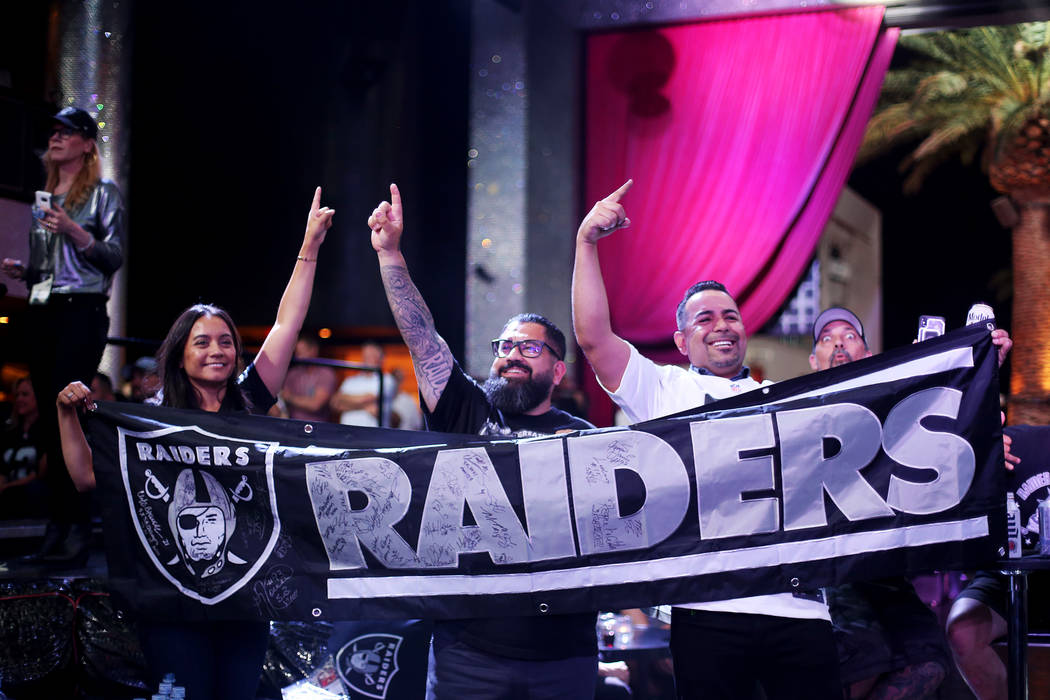 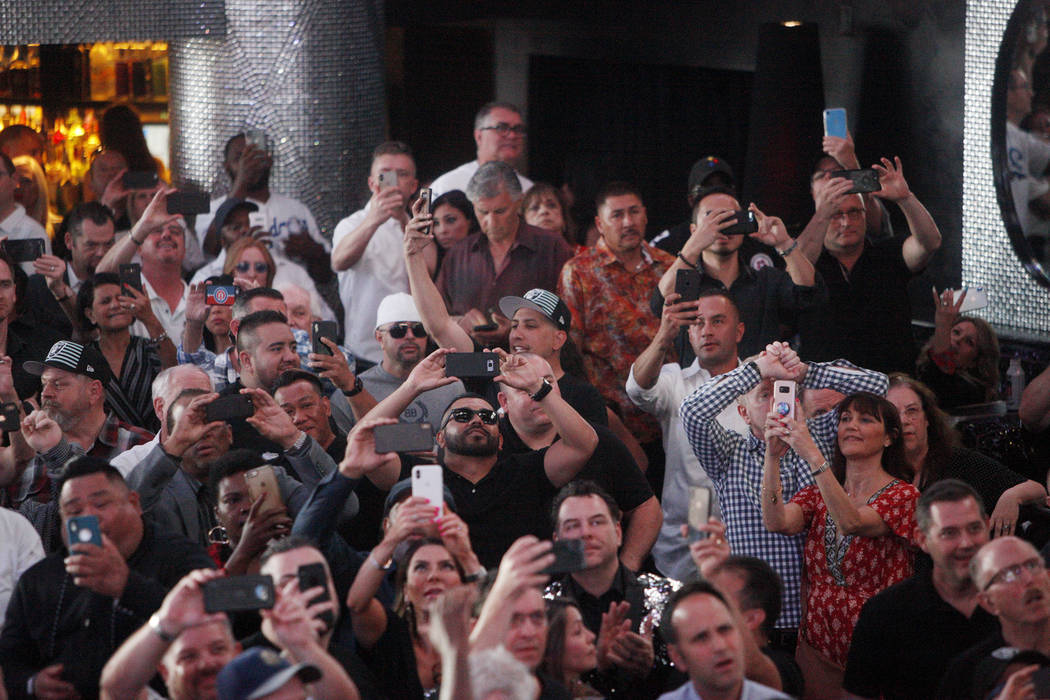 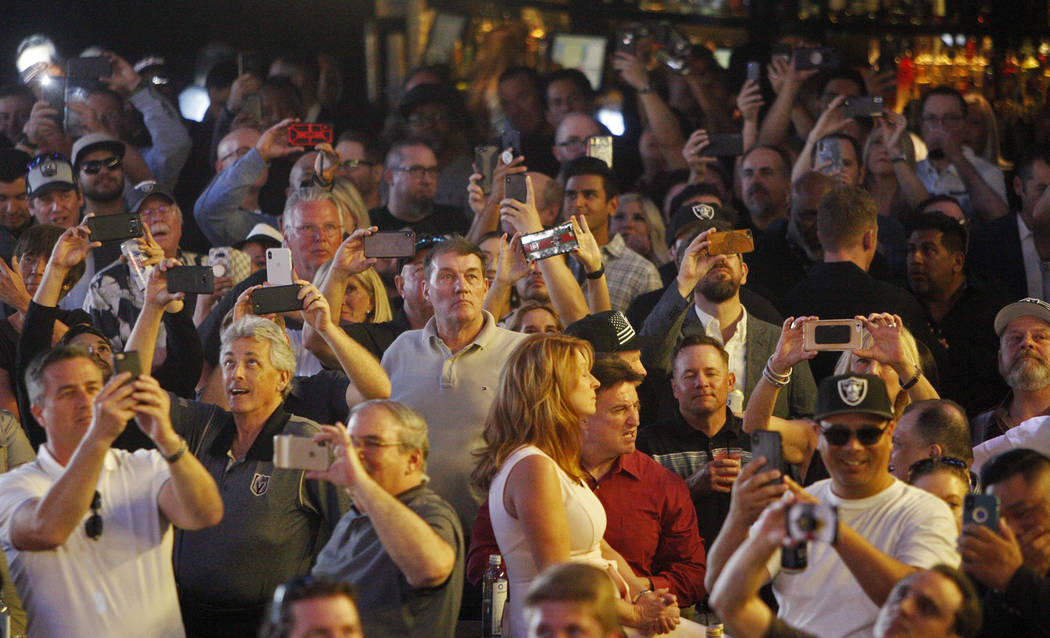 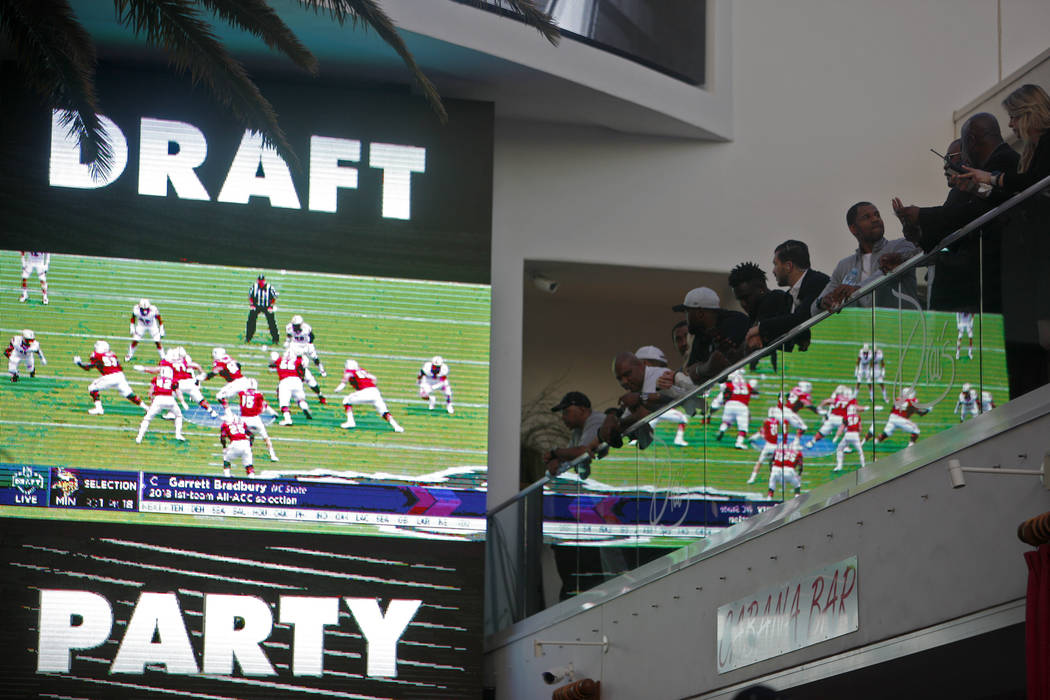 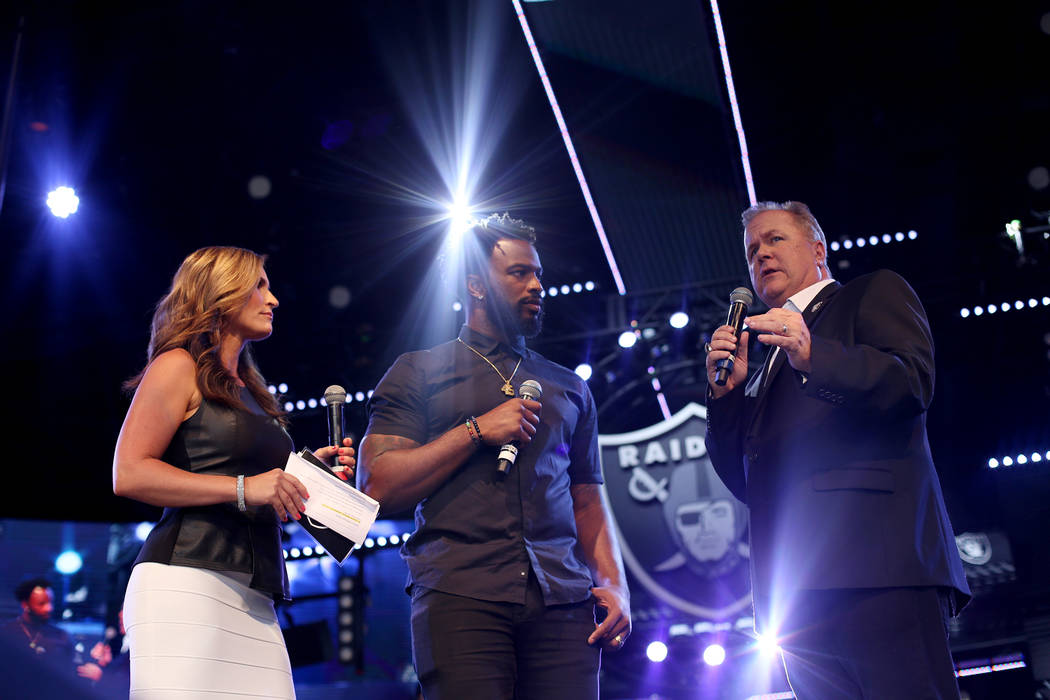 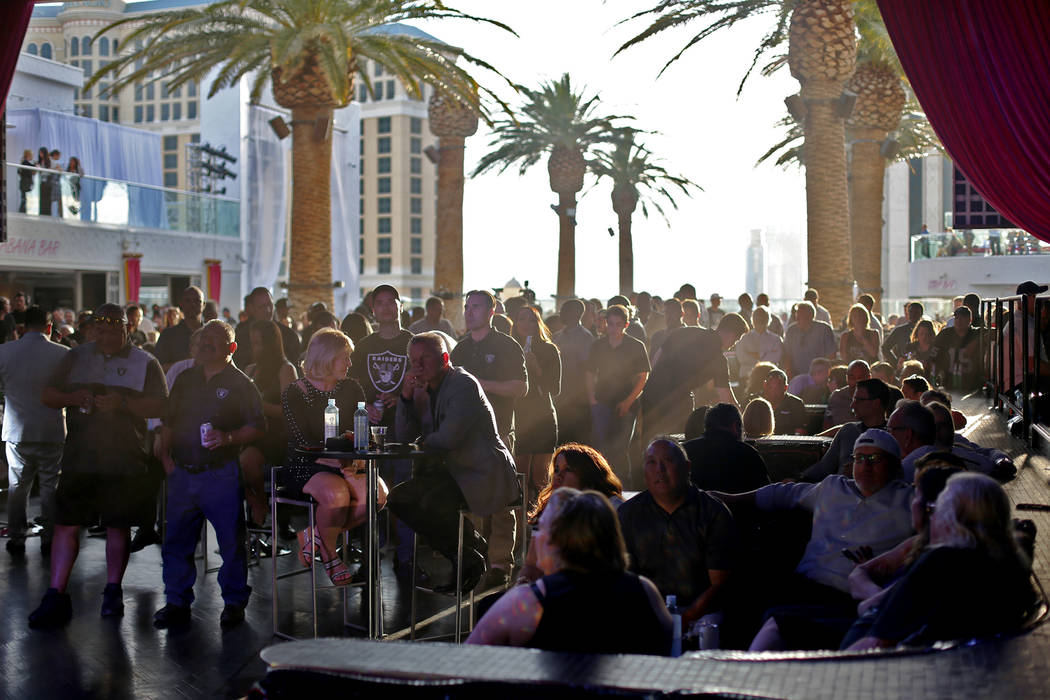 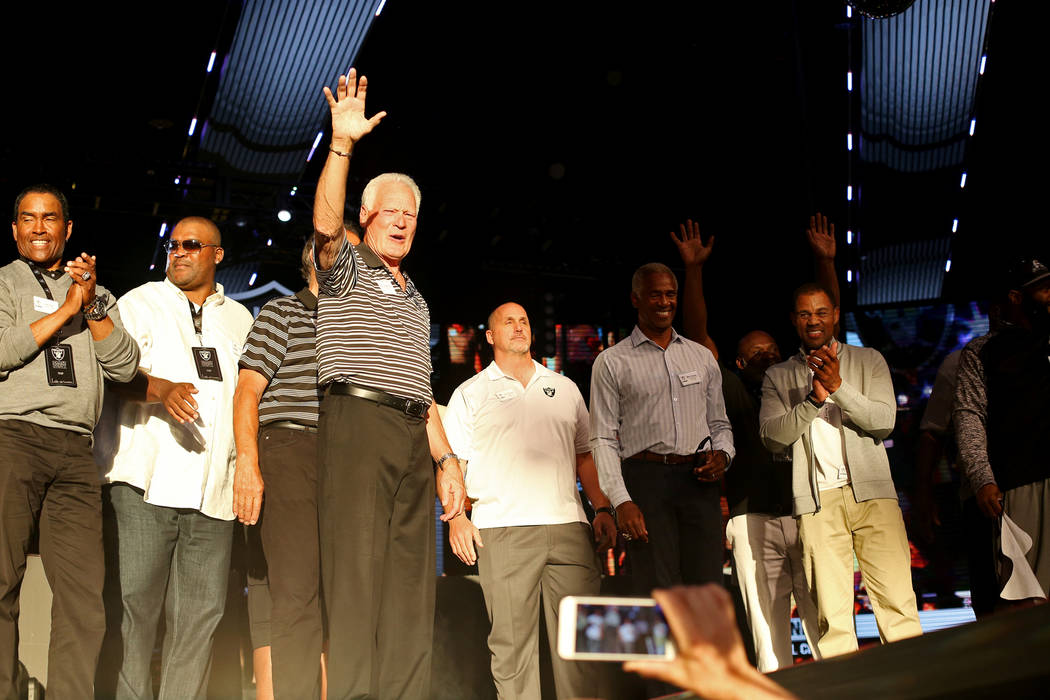 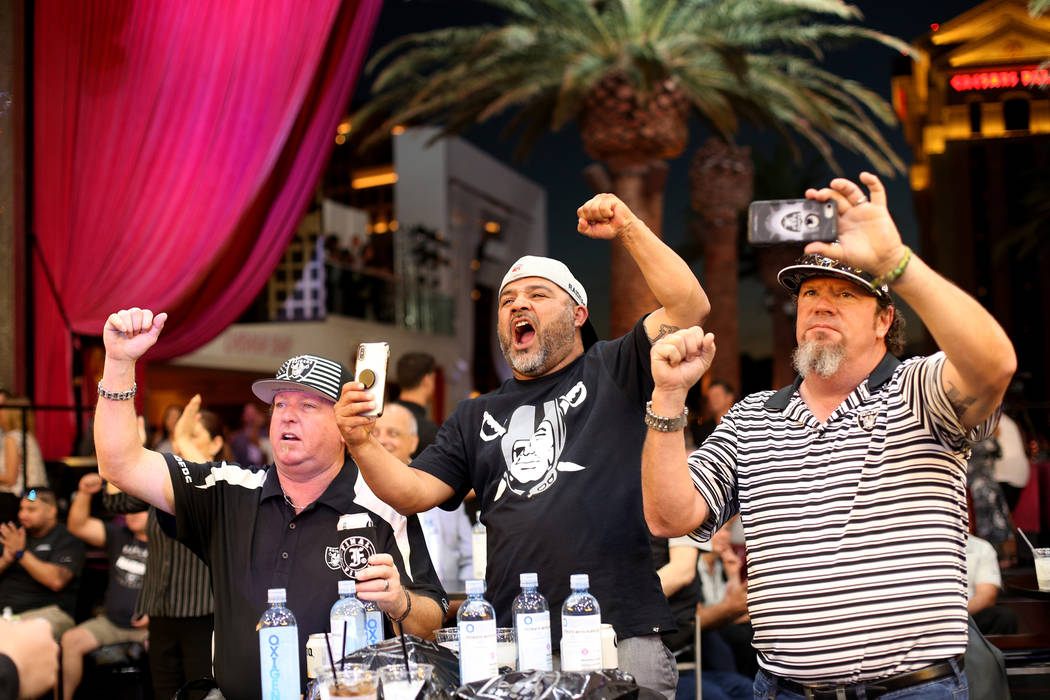 Jason Kosgelecky, from left, of Southern California, Rosendo Sanchez, of the Bay Area, and Charles Delorui, of Palm Springs, react to the 24th draft pick of running back Josh Jacobs at a Raiders draft party at Drai's nightclub at The Cromwell hotel-casino in Las Vegas, Thursday, April 25, 2019. (Rachel Aston/Las Vegas Review-Journal) @rookie__rae 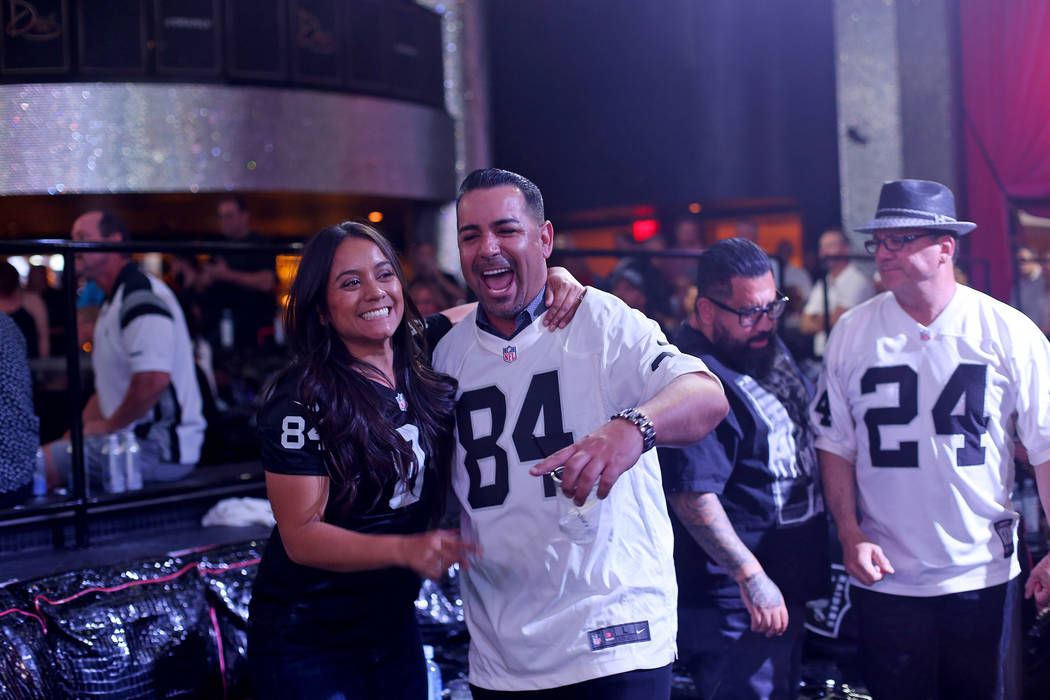 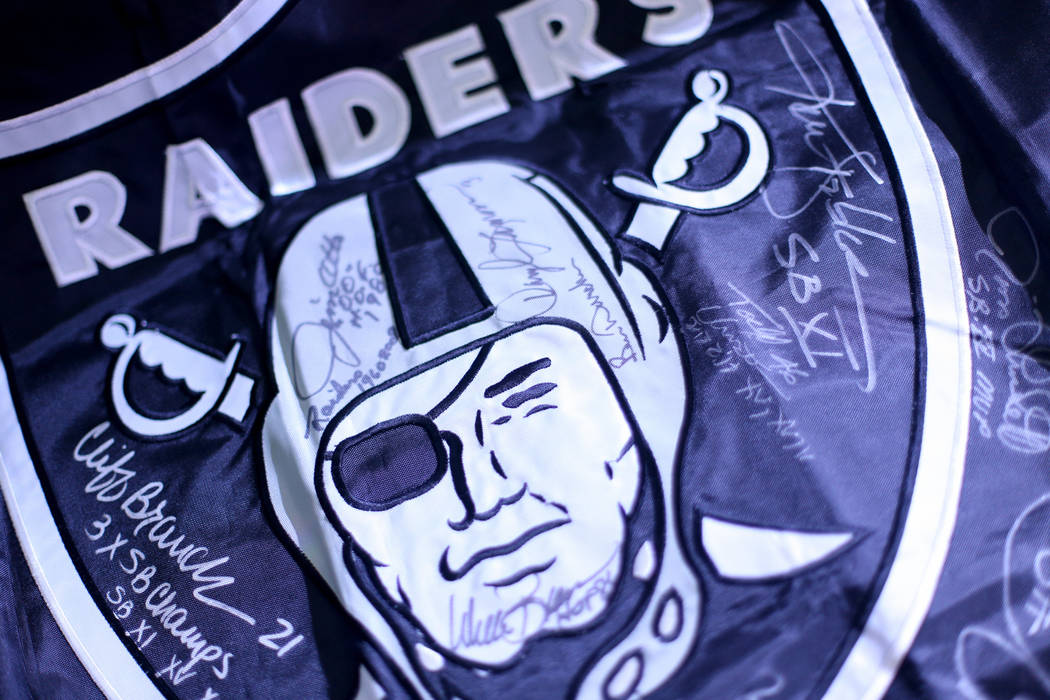 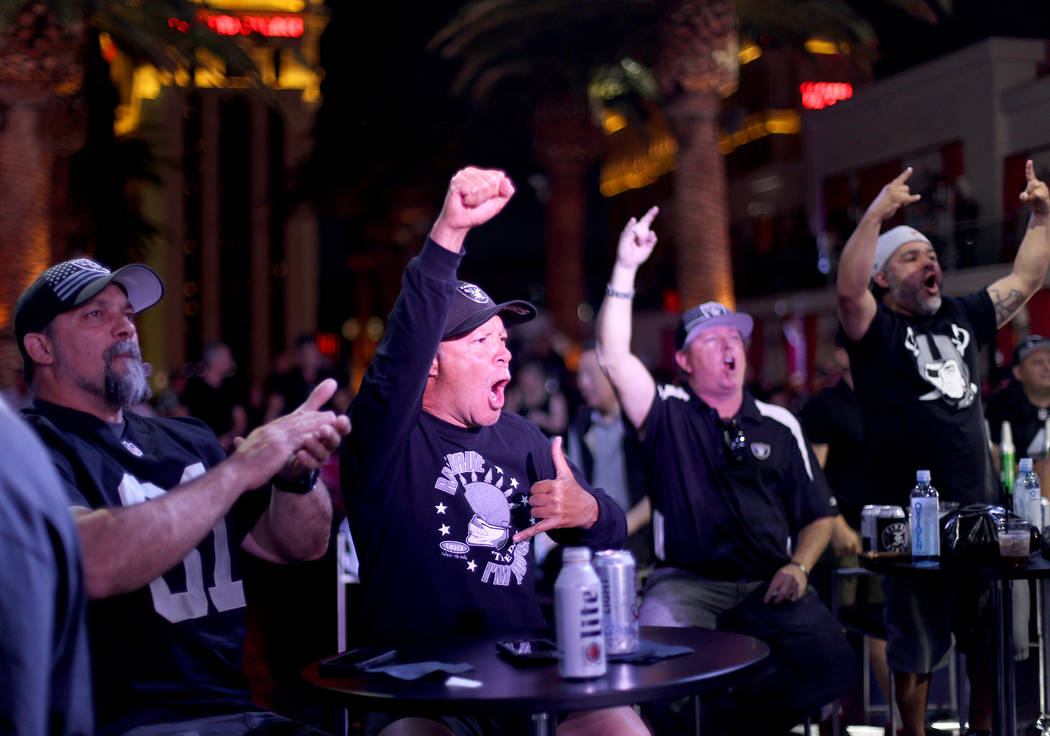 Josh Sprinkle, from left, and Sean Bogguess, both of Los Angeles, react to the 27th draft pick of safety Johnathan Abram at a Raiders draft party at Drai's nightclub at The Cromwell hotel-casino in Las Vegas, Thursday, April 25, 2019. (Rachel Aston/Las Vegas Review-Journal) @rookie__rae 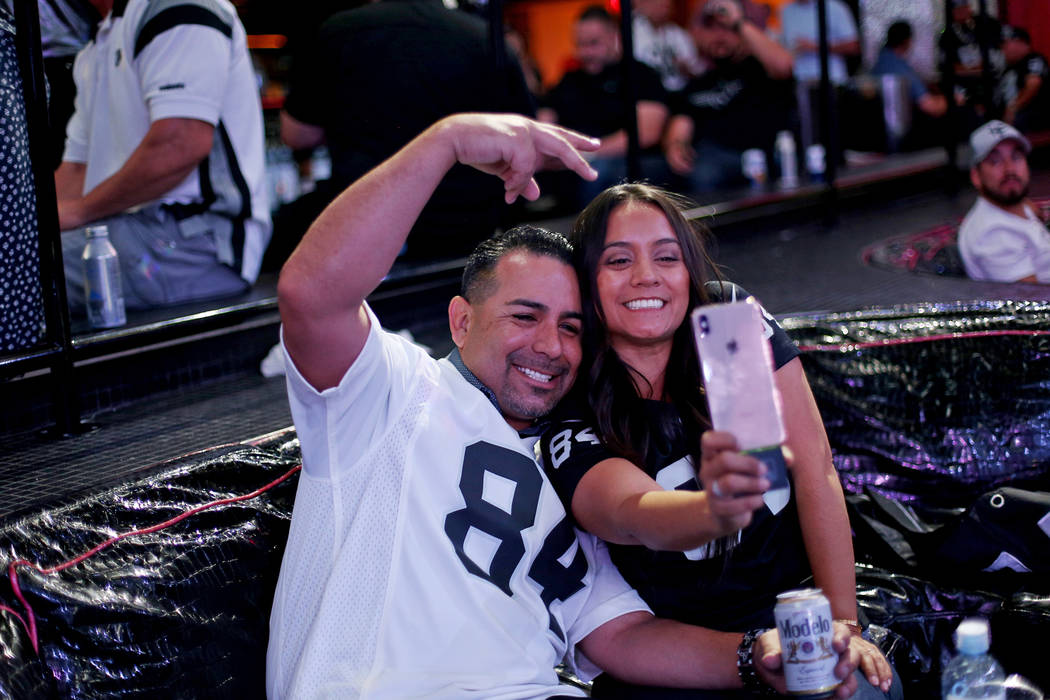 Raiderette cheerleaders danced and smoke cannons shot off. A large crowd at Raiders organized draft party on the Las Vegas Strip cheered as the team selected Clemson defensive end Clelin Ferrell with the fourth-overall pick in the 2019 NFL Draft.

The Raiders hosted an invite-only draft party Thursday night at Drai’s Nightclub at the Cromwell, attended by about 2,000 current and former Raiders players, club seat and suite holders for the Las Vegas Stadium and corporate partners.

Leo Gray, a former UNLV and Raiders player, said the team needed to address its defense, which was why the team picked Ferrell with their first-round draft.

“They have needs; obviously defense is one of those,” Gray said. “John (Gruden) will get the best players to take what they have now and take it to a new level with these three first-round picks.”

Las Vegan and newly acquired linebacker Brandon Marshall said he was excited to join the team that will move to his hometown in 2020.

Former Raiders cornerback Eric Allen believes the team will do fine in Las Vegas, pointing to the large turnout for the draft party, as he believes the team’s fandom is not contained by city limits.

“Playing for the team you understand the location really doesn’t matter,” Allen said. “Wherever the team goes the Raiders fans are going to follow. I feel bad for the fans in Oakland, but the Raider Nation is bigger than just Oakland and you see that by the crowd here today.”

Various other spots throughout the Las Vegas Valley hosted their own draft parties, including at the Downtown Las Vegas Events Center.

Next year’s draft will be an even bigger event for the city, as the NFL will host its annual draft in Las Vegas.

No matter where it takes place Gray said the event will be a huge hit.

“No doubt about it, (the draft) will serve as the initial kick off and it will move from there,” he said. “It will be an exciting time for this city.”