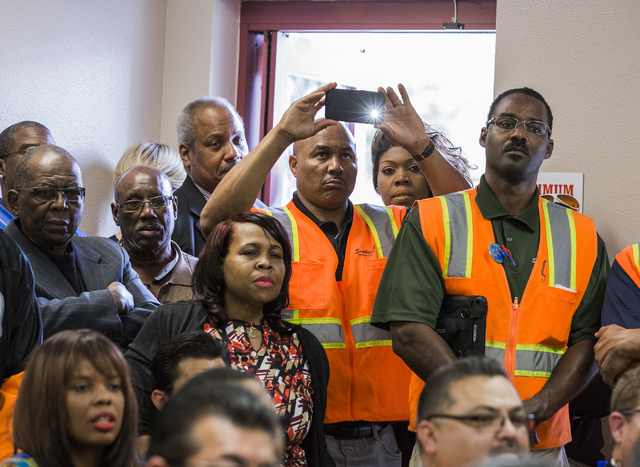 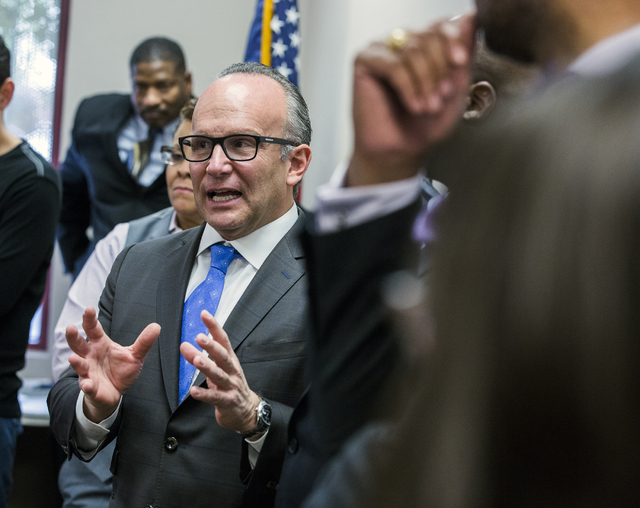 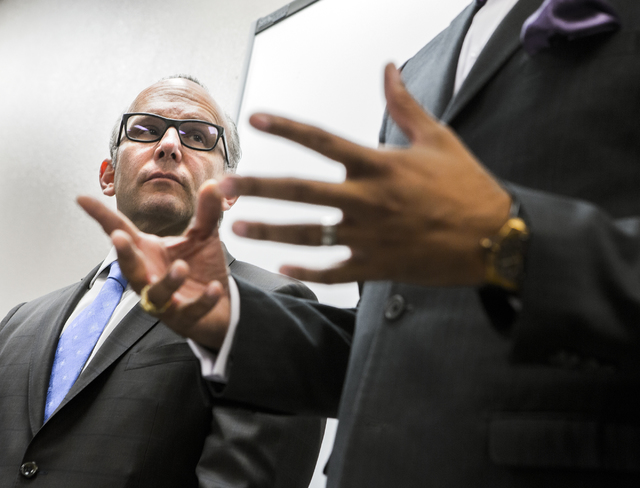 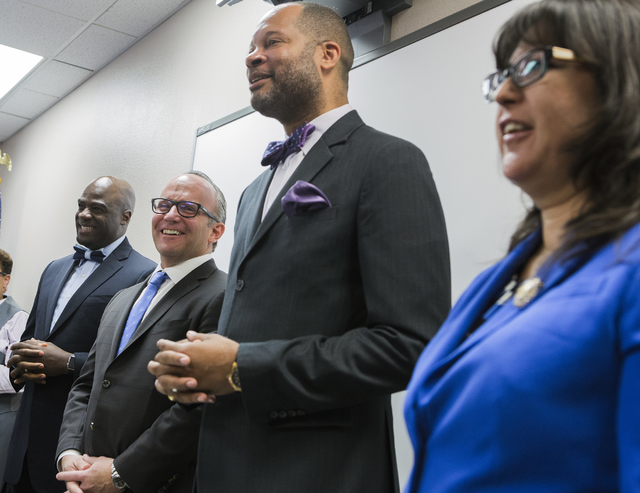 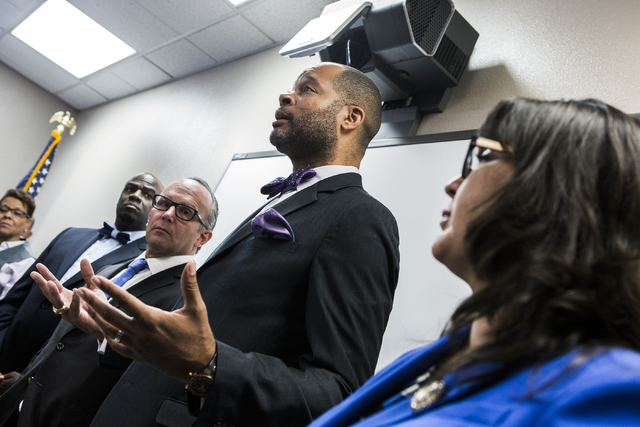 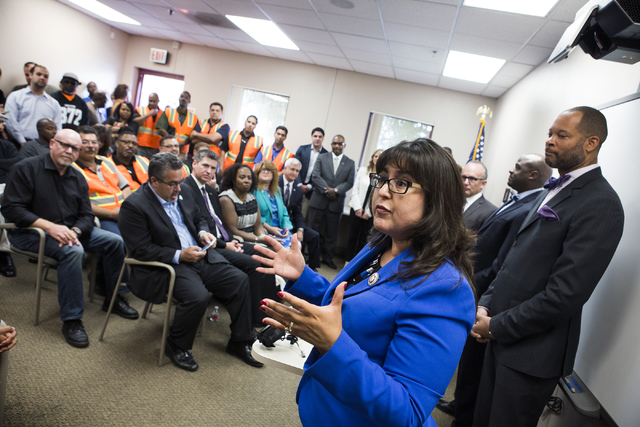 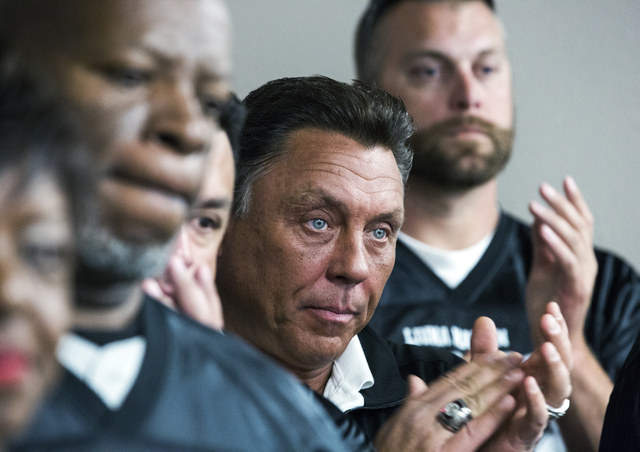 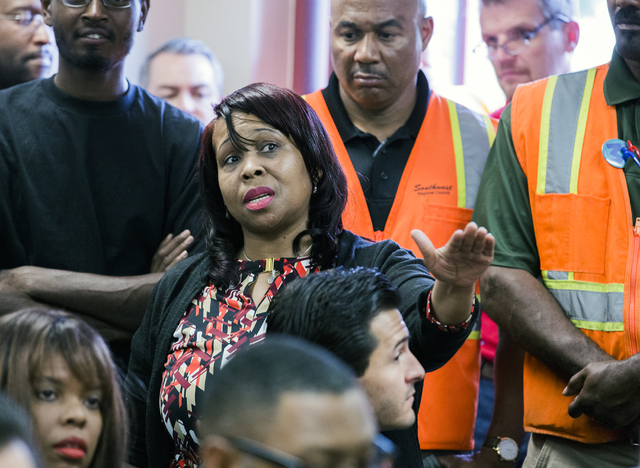 Sheila Collins asks about community benefits in the 89106 zip code during a news conference discussing benefits for employment at the stadium project at the Urban Chamber of Commerce in North Las Vegas on Thursday, Oct. 27, 2016. Jeff Scheid/Las Vegas Review-Journal Follow @jeffscheid 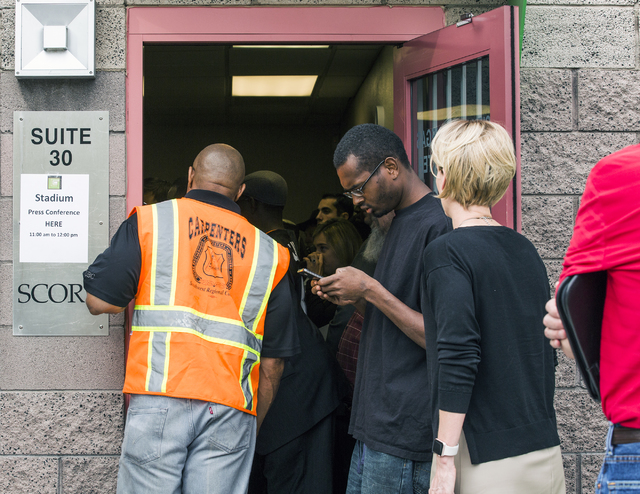 People stand outside of room at the Urban Chamber of Commerce, Thursday, Oct. 27, 2016, during a news conference in North Las Vegas to discuss benefits for employment at the stadium project. Over 50 people attending the event. Jeff Scheid/Las Vegas Review-Journal Follow @jeffscheid

Democratic legislative leaders plan to reach a community benefits agreement with a yet-to-be-appointed Las Vegas stadium authority board assuring that more than half the construction and operations jobs on the $1.9 billion project go to local workers.

Senate Minority Leader Aaron Ford, D-Las Vegas, said the agreement, still in the draft stage, is being worked out with representatives of Sheldon Adelson’s family, which is contributing $650 million toward the 65,000-seat dome near the Strip.

About 100 people jammed into a conference room Thursday at the Urban Chamber of Commerce to hear comments about the agreement from legislative leaders and representatives of minority chambers of commerce.

The announcement was made in the wake of a Reuters report from Tel Aviv, Israel, that Adelson, who led efforts to pass legislation raising $750 million in room-tax revenue for the project, said he would walk away from the project unless the Oakland Raiders improved their stake in the deal.

After the community benefits agreement announcement, Abboud said Adelson participated in a “fireside chat” at a travel technology conference in Israel and was asked about his negotiating strategies and techniques. He said Adelson used his negotiations with the Raiders as an example of his tactics, and he said his quotes were taken out of context.

According to the Reuters report, Adelson said, “(The Raiders) want so much, so I told my people, ‘Tell them I could live with the deal, I could live without the deal. Here’s the way it’s going to go down. If they don’t want it, bye-bye,’” he said.

In August, Adelson representatives told the Southern Nevada Tourism Infrastructure Committee that he would walk away from the deal unless $750 million in public funds was contributed to the project.

Davis, contacted Thursday morning, added, “It’s a non-story. I have no comment on it.”

Representatives of the Raiders and Sands met in Las Vegas on Wednesday to go over details of agreements that will go before the stadium authority board in advance of construction. Rob Goldstein, president and chief operating officer of Sands, and Patrick Dumont, the company’s chief financial officer and Adelson’s son-in-law, met with Raiders executives, Abboud said.

Among the matters that will be tackled by the nine-member authority board — which will include three members appointed by the Clark County Commission, three by Gov. Brian Sandoval and one by UNLV President Len Jessup — will be the community benefits agreement championed by Democratic leaders.

Ford detailed some of the terms planned for the agreement. They include job training, apprenticeship and internship programs, and choosing minority laborers, veterans and LGBT people among the local hires. The goal is to have up to 75 percent of the hired workers be local. The agreement also would include opportunities for small businesses to contract as suppliers.

The agreement envisions an oversight committee composed of members of the Urban, Latin, Asian and Women’s chambers of commerce and veterans groups to work with the stadium authority to enforce the hiring of a diverse workforce.

Ford also said the agreement would include a community access program enabling veterans, military families and low-income residents to get discounts and free admission to events at the stadium, including football games.

He said the developers and the Democratic leadership also negotiated a financial contribution for a recreational facility primarily for at-risk children.

Abboud said the programs outlined in the agreement are reflective of the employment philosophies used by Sands worldwide. He said the company is planning seminars on hiring and purchasing in advance of construction.

“This is going to be just like our philosophy has at the Venetian and Palazzo Las Vegas,” Abboud said. “We’ll have the best possible pay and benefits. These are not going to be low-paying jobs, but good jobs with good benefits.”

Ford said the agreement will be made public when it is presented to the stadium authority board.

CORRECTION: This story has been updated to say that the focus of the Democratic agreement is to emphasize the hiring of local workers for the Las Vegas stadium project.