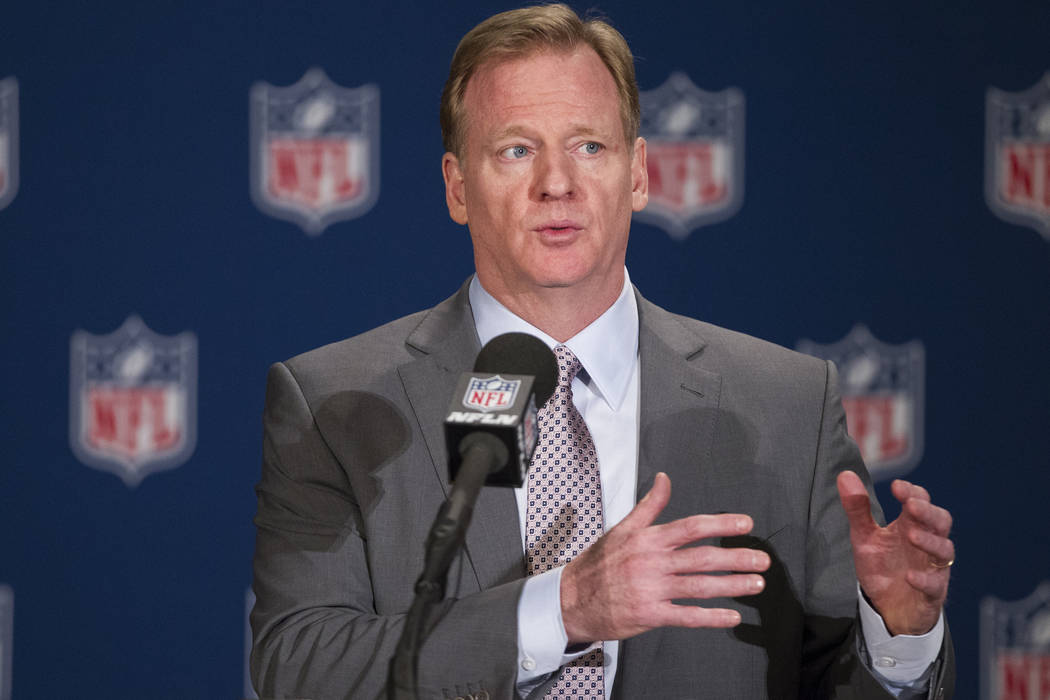 Commissioner Roger Goodell speaks during a press conference after the NFL approved the Raiders move to Las Vegas with a 31-1 vote in day two of the NFL Annual Meeting on Monday, March 27, 2017, in Phoenix, Ariz.. (Erik Verduzco/Las Vegas Review-Journal) @Erik_Verduzco

PHOENIX – A Super Bowl in Las Vegas, the ultimate entertainment feast of football, extravagance and decadence, is inevitable. So is the aggressive bidding by cities who want the prestige and economic advantages of hosting the most-important event in sports.

So, what will getting the big game really mean to the Southern Nevada economy, and when could it become reality?

With the Oakland Raiders poised to move into a gleaming new domed stadium Las Vegas in 2020, Las Vegas automatically gets in line to host the most-talked about event in sports. The next available year is 2022. But NFL Commissioner Roger Goodell told the R-J on Tuesday, “I don’t see it happening by then’’ in Las Vegas.

“There are other cities in line,’’ said Goodell, citing Phoenix, Tampa and New Orleans, among others. “The stadium will just be built at that point. But it will be built (to host a Super Bowl).’’

In the NFL, if you build (or refurbish) a stadium, the Super Bowl will come.

And when it comes to Las Vegas “it will be the biggest event ever here – it is every New Year’s Eve (celebration) rolled into one,’’ said Top Rank CEO Bob Arum, who has promoted some of the biggest events with major championship boxing in the city’s history.

Added Rossi Ralenkotter, president and CEO Las Vegas Convention and Visitors Authority: “We’re positioned very well to host a Super Bowl. Believe me, we know how to do these things.’’

The league incentivizes cities with the lure of the big game, often spurring local jurisdictions to spend hundreds of millions of dollars to help pay for stadium construction or renovation. The next four Super Bowls all will be held in new or remodeled stadiums: Minneapolis (’18), Atlanta (’19), Miami (’20) and Los Angeles, where Super Bowl LV will be held in 2021.

In a stadium-building proposal that lasted about a dozen years, Minnesota taxpayers paid about $500 million to help construct $1.129 billion U.S. Bank Stadium in downtown Minneapolis in a public-private partnership deal with the Vikings.

Some economists cite that Super Bowls have far less of a lasting impact on local economies, despite that some facilities are improved for the event. NRG Stadium in Houston was the site for the championship game last February, Super Bowl XLI, when the New England Patriots’ improbable comeback stunned the Atlanta Falcons.

Such estimates typically are pro-Super Bowl because they come from the host committees, which are predisposed to making a positive economic impact case. In the case of Las Vegas, it’s not as if the city already isn’t on the global sports and entertainment map.

David Carter, executive director of the University of Southern California’s Sports Business Institute, said that from an economic standpoint “you really have to put pencil to paper with Las Vegas.’’

“The Super Bowl might end up displacing a lot of other economic activity that already would have taken place there,’’ Carter said. “The more vibrant the city, the more there is a chance for displacement, and the less the economic piece of it is as meaningful. There’s a little bit of a ‘look at me element’ to it when a city hosts a Super Bowl. I don’t sense Vegas needs the ‘look at me’ component.’’

Regardless, said the LCVA’s Ralenkotter, “When it’s all said and done, we’ll have very strong numbers for Super Bowl (economic) impact.’’

Carter said a Super Bowl in Las Vegas ultimately should benefit the city because it never has had the opportunity to promote the city with the largest event in sports.

“Where it might move the needle is that it gives the tourism board and casinos a chance to market something new and different,’’ Carter said. “If the city can leverage sports as a 3-D brochure where you have executives visiting – and they no longer feel uncomfortable bringing their families – then I think they bring that family spending.

“With sports and entertainment, if you stand still you are going to get lapped.’’

Oakland Raiders get NFL’s approval to move to Las Vegas