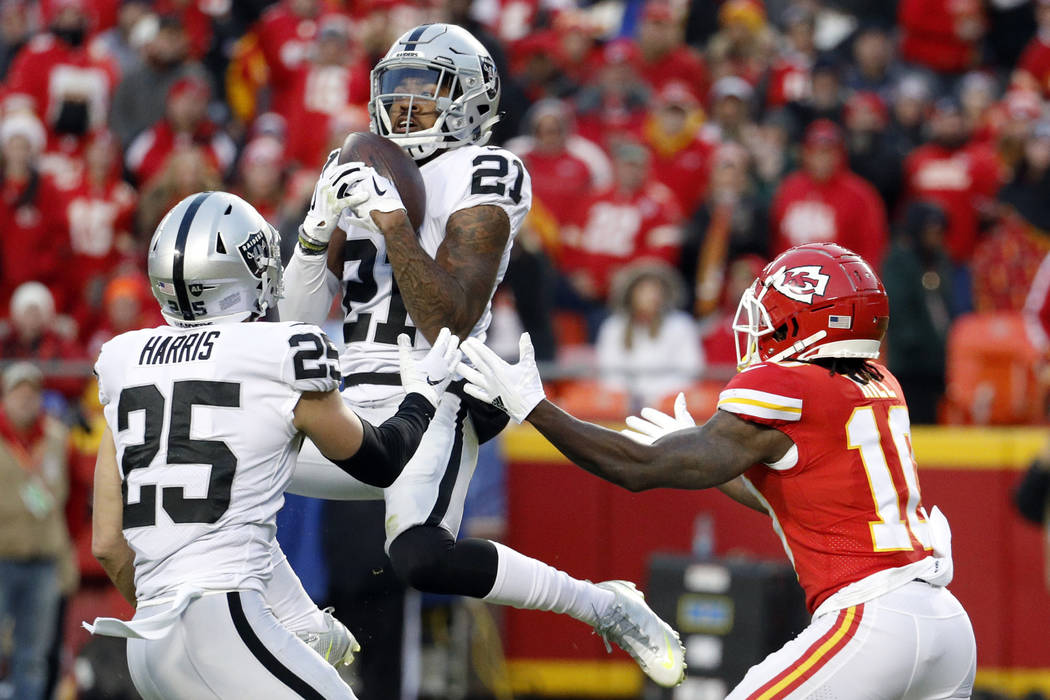 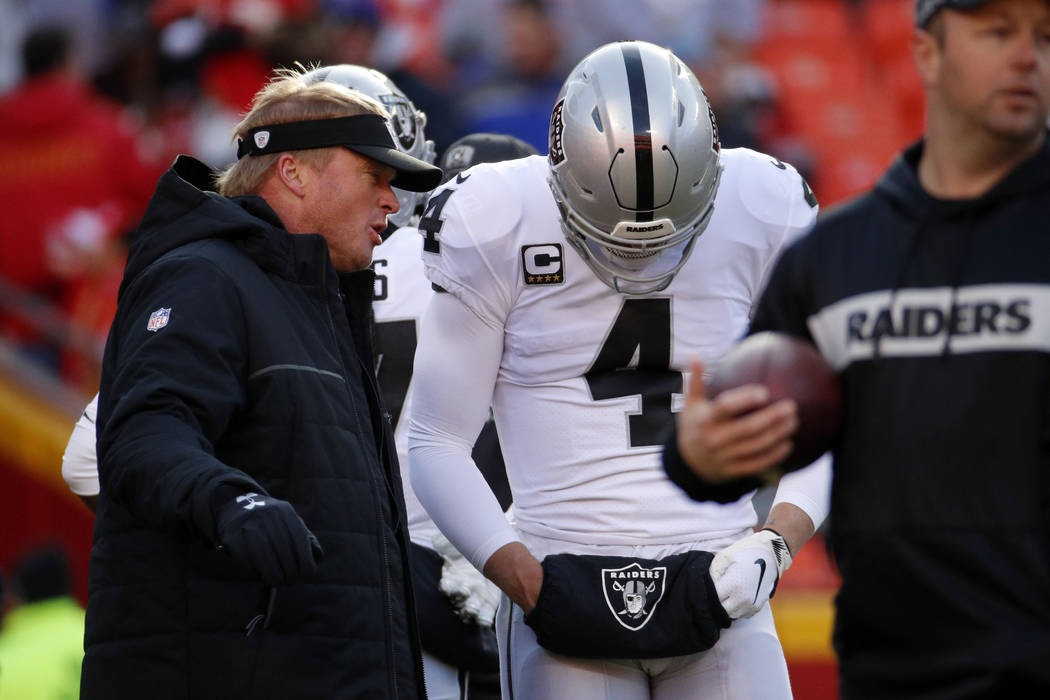 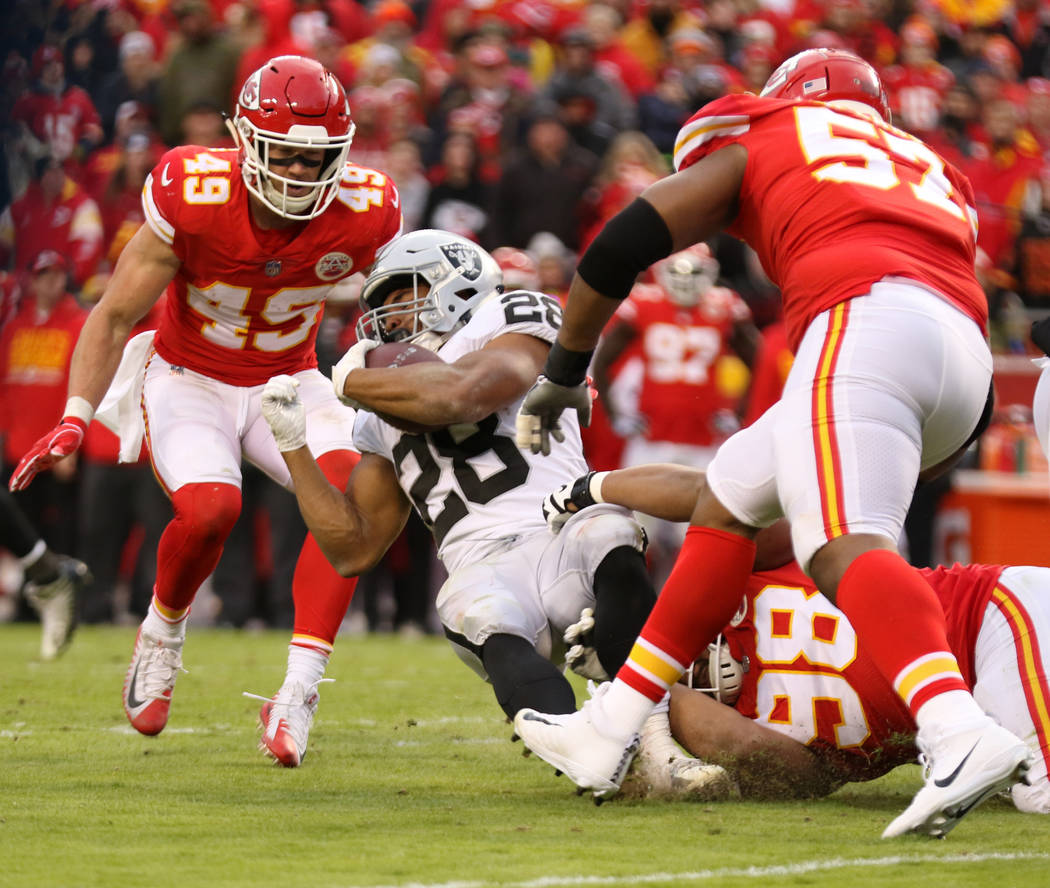 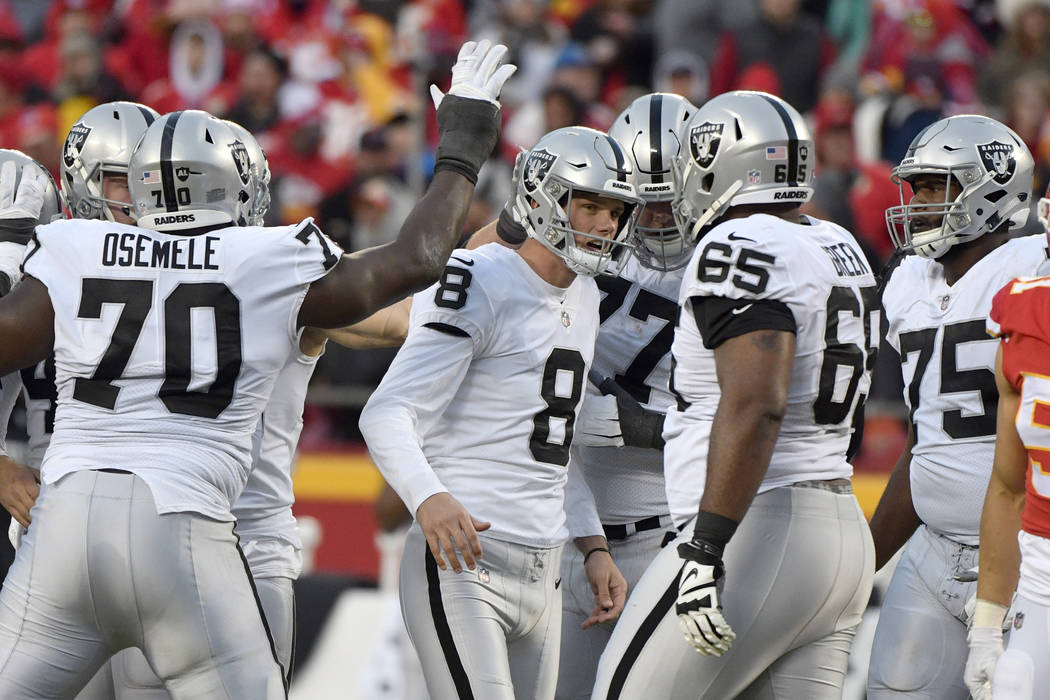 Oakland Raiders kicker Daniel Carlson (8) is congratulated by teammates after he kicked a field goal during the first half of an NFL football game against the Kansas City Chiefs in Kansas City, Mo., Sunday, Dec. 30, 2018. (AP Photo/Ed Zurga)

How the team performed in a 35-3 defeat against the Chiefs:

It’s notable that Derek Carr became just the third quarterback in franchise history to throw for 4,000 yards in a season and that Doug Martin finished the 2018 campaign with consecutive 100-yard rushing games, but when you turn the ball over on four straight first-half possessions against the AFC’s best team — fumble, interception, fumble, interception — and never reach the end zone, assigning a grade isn’t overly difficult.

There was a goal-line stand in the second quarter that kept the Chiefs out of the end zone and Gareon Conley recorded his third interception of the season, but Kansas City got touchdown passes from Patrick Mahomes of 67 and 89 yards while rolling upon a total of 409 yards. Raiders linebacker Tahir Whitehead twice had would-be picks of Mahomes in his hands … and twice dropped them.

What a find rookie kicker Daniel Carlson was for the Raiders, one of the few bright spots across a losing season. He made good from 50 yards Sunday and finished 16-for-17 on field goals, good for 94.1 percent and a single-season franchise record. Minnesota cut Carlson after two games. Heck, even inconsistent rookie punter Johnny Townsend (two kicks downed inside the Kansas City 10-yard-line) had himself a game Sunday.

It’s a bottom line business and 4-12 doesn’t cut it for anyone at this level. Jon Gruden returned to the sidelines for the first time in 10 years and discovered winning in the NFL isn’t so easy, after all. He made personnel moves that were highly criticized nationally and the weekly product his team offered on the field was nowhere near good enough.