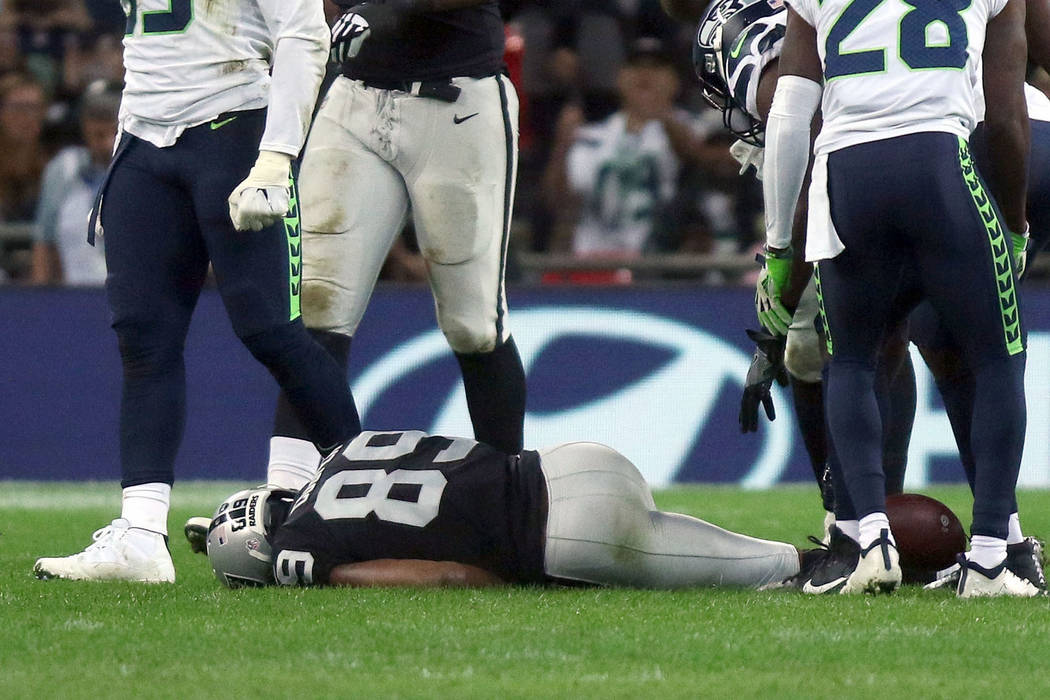 LONDON — Amari Cooper began his Sunday with news that the only NFL team he’s known is shopping him around the league for a possible trade. He then dressed into uniform. On his first target, he caught a 28-yard pass against the Seattle Seahawks, but it was negated due to a holding by an offensive lineman.

Yet the day managed to worsen drastically.

The Raiders wide receiver appeared to lose consciousness in the second quarter when he absorbed an apparent helmet-to-helmet hit over the middle of the field. No flag was thrown. After about a minute, he stood and jogged off to the sideline and walked to the locker room. He was diagnosed with a concussion in the 27-3 loss.

After the game, there was much for coach Jon Gruden to unpack.

There was the health of Cooper. There was the non-penalty call on safety Bradley McDougald. And of course, there was the Fox Sports report that the Raiders are actively exploring the option to ship their 2015 first-round draft choice, someone Gruden said in May he hoped to make the “main vein of our pass offense.”

In a news conference, Gruden only expressed interest in the first item.

“I don’t know,” he said of the trade report. “I haven’t heard that. I’m just sorry to have to deal with a lot of these reports. I just hope Amari is OK. Like I said, he’s going to be a big part of our pass offense, and we’ll see what happens here. Hopefully he’s all right.”

The same report also stated the Raiders are actively shopping backup safety Karl Joseph, their 2016 first-round choice. He has missed the past three games with a hamstring injury.

Joel Segal represents both players. He also has Khalil Mack as a client and last month helped maneuver the trade of the All-Pro defensive end to the Chicago Bears.

— A rotation at outside cornerback seems to be over, at least at one spot. Daryl Worley and Dominique Rodgers-Cromartie started on Sunday. Rashaan Melvin spelled Rodgers-Cromartie on occasion. Gareon Conley was limited to special-teams duty. It is unclear if Rodgers-Cromartie can maintain his role, but the outlook is promising for Worley. “Worley is going to be a starter here,” Gruden said. “He’s a guy that’s really established himself as a true corner for the Raiders.”

— Worley allowed some plays at corner, including a 42-yard catch by wide receiver Doug Baldwin. But his day also included an interception off a pass that safety Erik Harris tipped in coverage.

— Rookie punter Johnny Townsend had kicks of 28 and 27 yards. “He didn’t punt the ball well enough,” Gruden said. “This might’ve been the first time Johnny’s seen a drop of rain since he got off the plane (to Oakland). I don’t know if the slick field had anything to do with it, but we have to punt the ball better.”

— Awful field position has been a constant in all five Raiders losses. On average, the offense started Sunday at its own 20-yard line.

— Although it technically was a “home” game for the Raiders, the European crowd clearly favored the Seattle Seahawks. The Raiders often were booed in pregame warmups. Little in regulation occurred to affect that favoritism.

— At 84,922, the announced attendance was the largest of the NFL’s London series.

— The past six NFL international games were decided by an average of 26 points. None were within two scores.