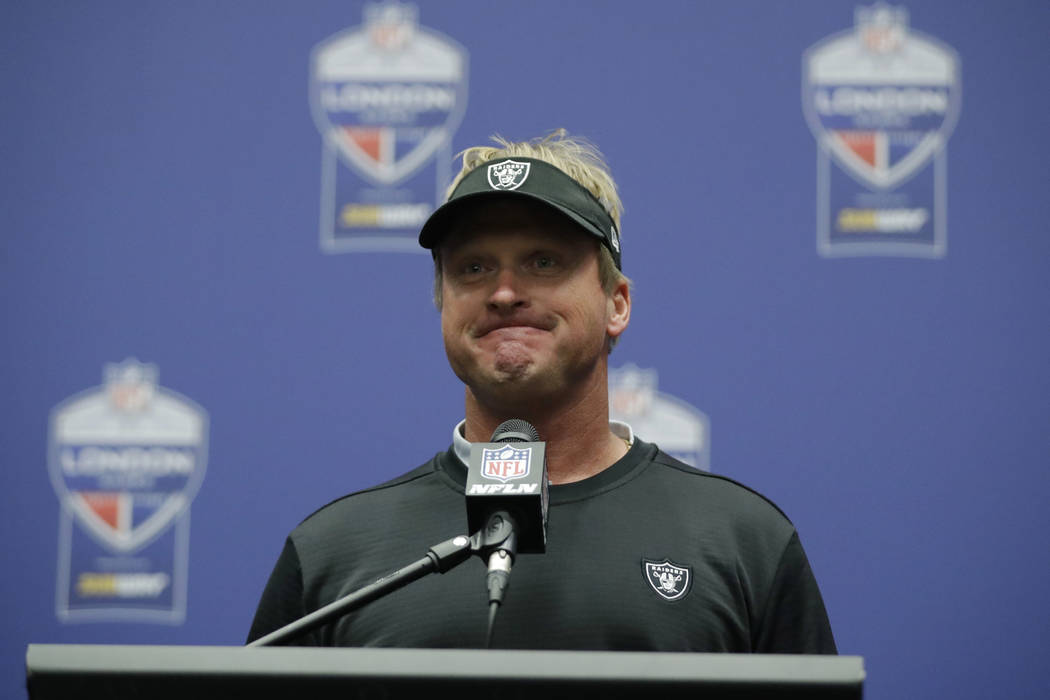 On Oct. 14, the Raiders coach was asked following a game against the Seattle Seahawks about reports indicating the team might trade wide receiver Amari Cooper. Gruden begrudged having to “deal with a lot of these reports” and said Cooper “is going to be a big part of our passing offense.”

Cooper did not practice or play with the team again.

Eight days later, this past Monday, he was traded.

Gruden spoke to Bay Area reporters Wednesday for the first time since Cooper was dealt to the Dallas Cowboys for a 2019 first-round pick. He rehashed events surrounding the most recent deal and also addressed whether more are to come.

The NFL’s trade deadline is Tuesday.

“I didn’t see us making a trade the other day,” Gruden said. “I really didn’t. Sometimes, your plans change, whether you like it or not. You don’t know who is calling or what they’re going to say. You really don’t. That goes in all phases of life. … I don’t see us making any more trades, but I’ll never say ‘never’ again to anybody. If I said ‘never’ to you, I’m sorry. I don’t think I did.”

Not until the deadline passes can the transaction door be closed.

And so, speculation will continue.

General manager Reggie McKenzie seemed opened Monday to the option of other players being moved. He did not cite anyone by name, of course, but safety Karl Joseph is believed a strong possibility, presuming the club receives an offer it deems worthy.

McKenzie passed up an opportunity to dismiss any player as “untouchable.” That left quarterback Derek Carr open to questions Wednesday about the possibility he could follow Cooper and defensive end Khalil Mack.

“My brother told me when I came into the NFL, ‘If they cut Peyton Manning, they’re going to cut you someday, too,’” Carr said. “So, that’s always a realization for anybody in our locker room. … But to be honest with you, I’m the quarterback here today, I have confidence I’ll be here tomorrow, and when we turn this around, I’m very confident I’m going to be here when we do that as well.

— The bye week was not long enough to heal Kelechi Osemele’s right knee. The Pro Bowl left guard was the only Raiders player not to practice Wednesday. He’s missed the past two games. Gruden said he is “still not sure” if Osemele will face the Indianapolis Colts on Sunday.