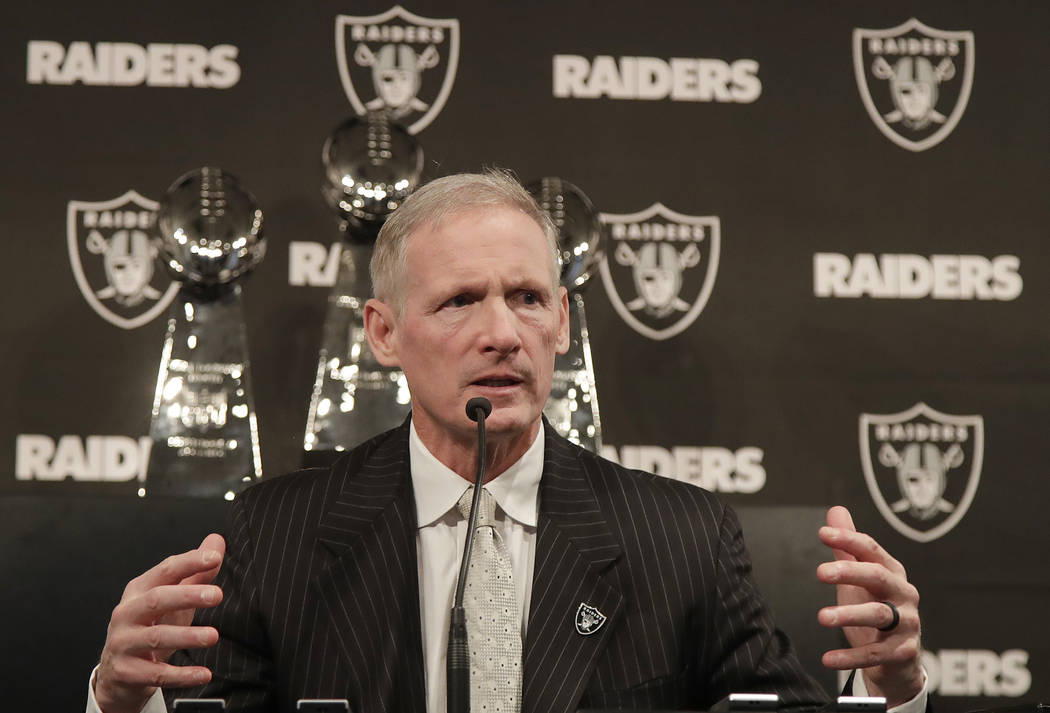 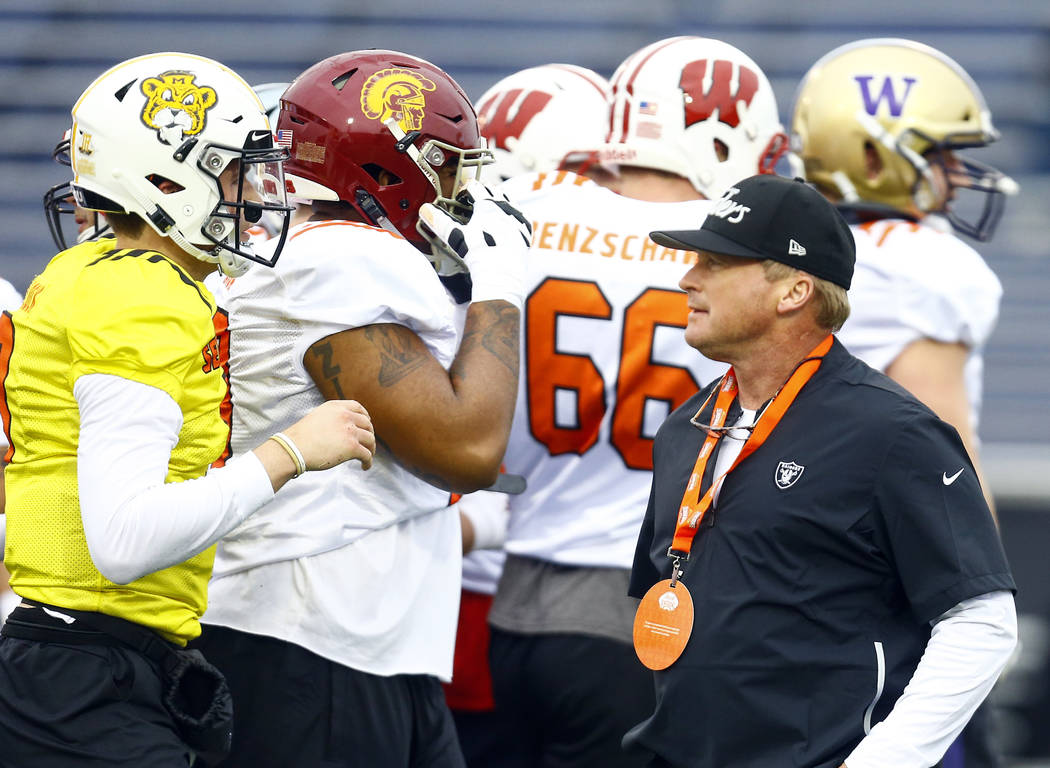 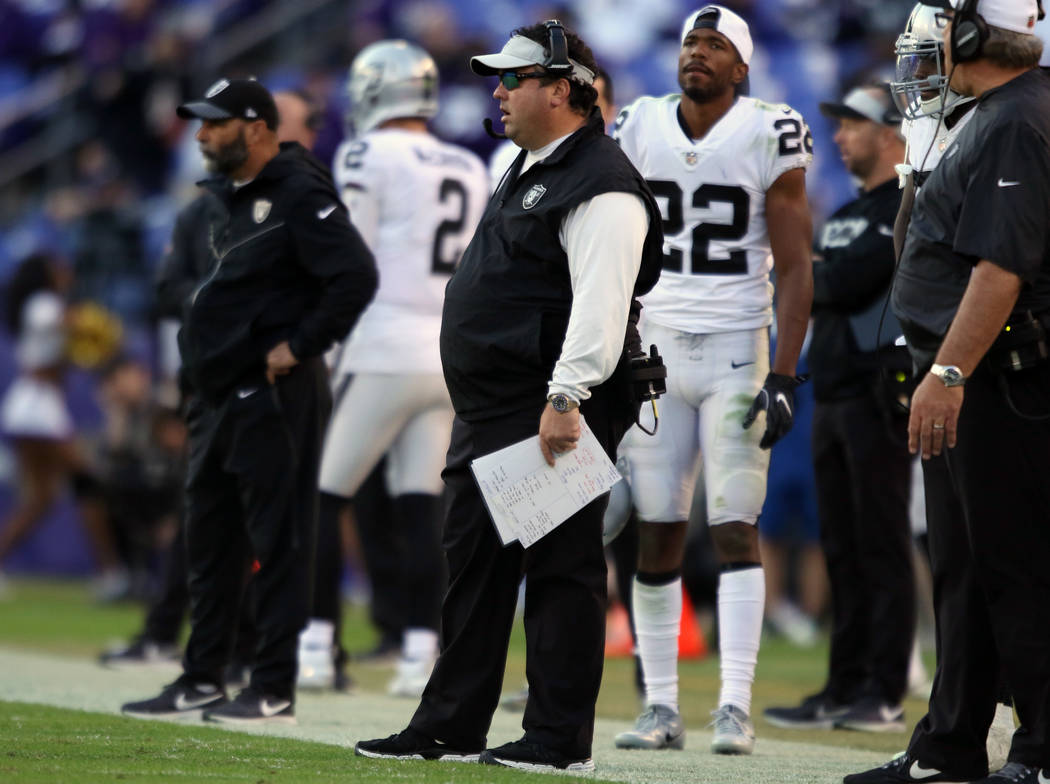 Oakland Raiders defensive coordinator Paul Guenther on the sideline during the first half of an NFL game against the Baltimore Ravens in Baltimore, Md., Sunday, Nov. 25, 2018. Heidi Fang Las Vegas Review-Journal @HeidiFang 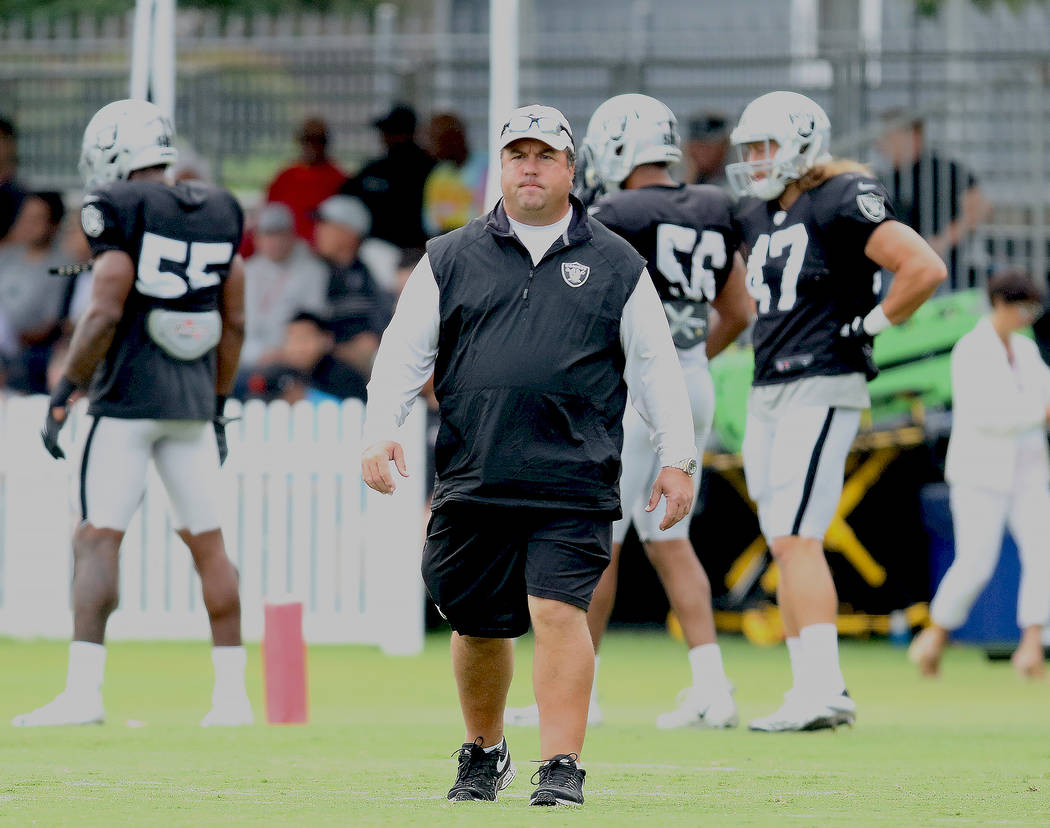 MOBILE, Ala. — Paul Guenther became the youngest head coach in college football upon joining Ursinus College, a Division III program about 25 miles northwest of Philadelphia, in 1997. For his first recruiting visit, the 25-year-old planned to visit five local high schools on the same day, beginning with the Haverford School.

A man met him there.

He was an iconic football coach on campus, someone familiar with the region.

“I got there about 6:30 in the morning,” Guenther said. “I didn’t leave there until about 1. And he took a map out. He took me through the whole Philadelphia area to go see all these guys. And then he says, ‘You know, you really should meet my son.’ (His son) was working in commercial real estate at that point, announcing games, and we just kind of … hit it off.”

Twenty-two years ago, with a map, Mike Mayock Sr. helped Guenther find football talent. Today, as general manager, Mike Mayock Jr. is doing the same. The Raiders are in need of direction, as they navigate a critical offseason that features substantial salary-cap room and 11 draft selections, including four of the top 35 picks. A busy scouting week will conclude Saturday when the team coaches the North squad in the Senior Bowl.

They will be evaluating not only their own players but those on the South, too.

Next season will be Guenther’s second as Raiders defensive coordinator.

In his first, he hardly stood a chance.

The Raiders planned for defensive end Arden Key, a rookie third-round pick, to handle a situational, third-down role behind Mack and Irvin. Instead, he totaled 644 defensive snaps, fourth-most on the team.

Key is the only defensive end under contract for 2019. Oakland totaled an NFL-low 13 sacks, recording multiple sacks in a game just once.

Clearly, Guenther needs more talent. Long ago, to find it, he relied on Mayock Sr. Here is again, leaning not only on Mayock but coach Jon Gruden and the Raiders’ scouting department for assistance. It’s rather serendipitous that Mayock occupies this role, his first in an NFL front office following a decorated broadcasting career.

There are other connections between Mayock and the coaching staff.

Among them, he and Gruden met when the latter was the Philadelphia Eagles’ offensive coordinator from 1995 to 1997. Mayock worked as a local-based broadcaster at the time.

“It’s kind of amazing,” Mayock said. “Rich Bisaccia (special teams coordinator) and I go back to 19 years old at Joe Namath’s football camp in Quinnipiac, Connecticut, two slappy 19-year-olds, just nerdy guys who loved ball. We met each other then, and we’ve been friends since. Go figure. How did we end up with the Oakland Raiders all these years later?”

Said Guenther: “I always told him he’d be a great general manager. He’s a great evaluator of talent. He’s been doing this thing with the draft even before guys were doing it to this extent. …I think he’s going to do a tremendous job for us.”