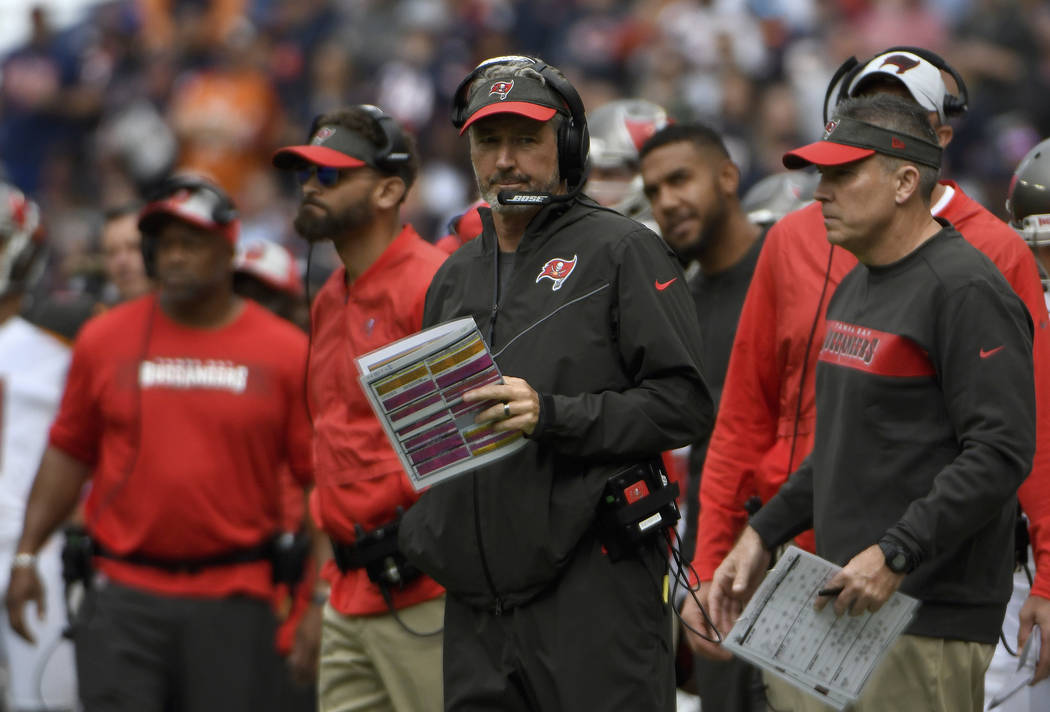 Arizona Cardinals coach Steve Wilks said it was premature to discuss personnel changes after his team was embarrassed in a 45-10 loss at home to the Denver Broncos on “Thursday Night Football.”

McCoy, who was calling plays for arguably the worst offense in the league, wasn’t the only coordinator relieved of his duties this week. Mike Smith was fired as defensive coordinator for the Tampa Buccaneers.

When coordinators are being handed their walking papers, that usually means head coaches are next.

This year, there are seven first-year heads coaches in the NFL. That number could be higher for the 2019 season.

Here are nine coaches who might be on the hot seat. But some coaches are on different temperatures. Let’s rank them based on Buffalo Wild Wings hot sauces. That’s not strange at all.

— Mike McCarthy, Green Bay Packers:At some point Aaron Rodgers will get tired of carrying the offense. There’s no creativity with the play calls and the Packers have been getting by with Rodgers’ superior playmaking ability on the fly.

Imagine Rodgers with a Sean McVay or a Kyle Shanahan? McCarthy’s 13-year tenure is growing dull.

— Jason Garrett, Dallas Cowboys: Rumors swirled that Garrett could soon be let go, but then his Cowboys crushed the Jaguars last week and suddenly there were talks about an extension.

Cowboys owner Jerry Jones denied that there’s a looming extension with Garrett. That might be relief for Cowboys fans who are tired of seeing a Stone Age, run-first offense in a passing league.

— Hue Jackson, Cleveland Browns: Jackson’s seat was burning after a 1-31 record in his first two seasons in Cleveland. But then he had a positive start to the 2018 season with wins against the Jets, Ravens and a tie with the Steelers.

— Also, the Browns defense is vastly improved, but the team took a step back in a poor performance last week in a loss against the Chargers.

— Sean McDermott, Buffalo Bills:McDermott led the Bills to their first playoff appearance in 17 years last season and could now be on the way out. That’s life in the NFL.

The Bills offense is one of the worst in the league and rookie quarterback Josh Allen hasn’t shown signs of improving. Being enamored with Nathan Peterman doesn’t help McDermott’s case.

— Steve Wilks, Arizona Cardinals: Yes, Wilks is a first-year coach. It’s been that bad. He’s not in charge of the putrid offense, but his defense isn’t much better.

The Cardinals have struggled against the run, and might soon trade away their best cornerback in Patrick Peterson.

— Doug Marrone, Jacksonville Jaguars: The Jaguars entered the season with Super Bowl expectations. They’ve been one of the biggest disappointments with a 3-3 record.

— Todd Bowles, New York Jets: Bowles was the front-runner to be fired first this season until the Jets won their last two games to pull to 3-3. Bowles’ job will depend on rookie quarterback Sam Darnold’s progression the rest of the year.

— Vance Joseph, Denver Broncos: Joseph’s team was on the winning end of the prime-time shellacking, but that doesn’t take him off the hot seat.

The Broncos’ are 3-4 with a poor rushing defense that allowed Todd Gurley and Isaiah Crowell to run for more than 200 yards in consecutive weeks.

So far, the Case Keenum experiment at quarterback hasn’t worked. Joseph was almost let go last year after his first season in Denver.

— Dirk Koetter, Tampa Bay Buccaneers:Koetter recently said everyone should be fired after the team’s blowout loss to the Chicago Bears last month. The firings have started and he soon might be next.

It was a surprise that Koetter wasn’t let go after the 2017 season. Maybe it was the team’s way of telling Jon Gruden there are no openings and he should talk to the Raiders.