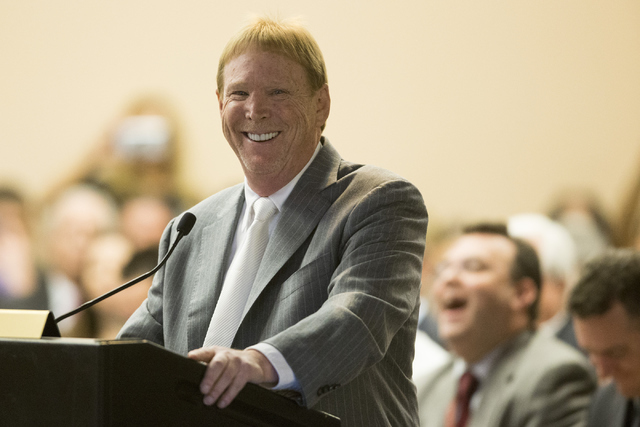 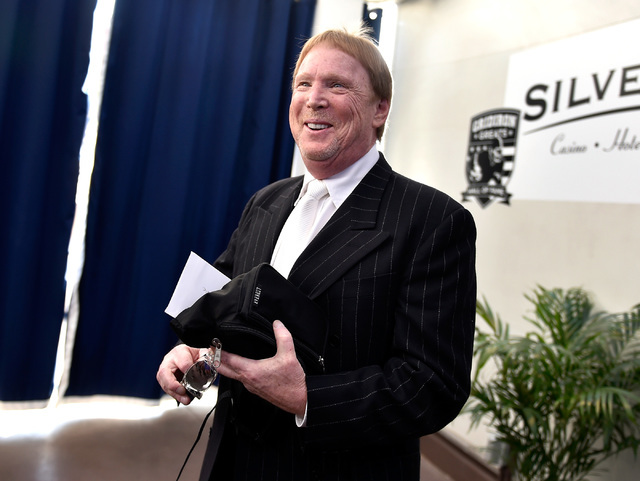 Oakland Raiders owner Mark Davis has vowed to relocate his football franchise to Las Vegas. He can only guess how many other NFL owners would support the move, and he’s moving forward without knowing for certain whether his prospective new home is built to succeed.

Las Vegas is a sure thing as an entertainment destination, but is it ready to be a big-league sports city? Is it prepared to support a pair of major professional teams?

More important to Davis, is the market financially viable for the Raiders?

“We’re doing some studies on that,” he said.

The NHL took the first leap of faith by announcing Wednesday it was awarding an expansion franchise to Las Vegas and team owner Bill Foley, a billionaire businessman and now a pioneer in the desert.

The NFL is waiting — in some cases hesitantly — in the on-deck circle as representatives from the Raiders, Las Vegas Sands Corp. and Majestic Realty continue negotiations with the Southern Nevada Tourism Infrastructure Committee over the financing plans for a $1.4 billion, 65,000-seat domed stadium at a location to be determined near the Strip.

The latest funding proposal calls for a $500 million contribution from the Raiders, $400 million from the Sands and Majestic developers, and $500 million from the public through hotel room taxes. The private partners, pushing for $750 million in public money throughout the process, reacted negatively to the surprise changes, revealed to them Wednesday afternoon and made public at Thursday morning’s committee meeting.

The next SNTIC meetings are scheduled for July 11 and 28, and recommending a funding plan and stadium site will be priorities. The final hurdle, assuming the stadium ultimately gets a green light from the Nevada Legislature and Gov. Brian Sandoval, is approval of the Raiders’ relocation from 24 of 32 NFL owners.

“We are sort of starting with the expectation that this market is ready for that type of expansion because, frankly, developers are willing to put investment money in and the Raiders have expressed their desire to come here,” said Jeremy Aguero, a principal at Applied Analysis.

Aguero, an expert in economic and fiscal impact analysis, has explained the details of the stadium financing plan at the past three monthly SNTIC meetings. The most well-known numbers: Las Vegas has 2.1 million residents, and the city attracted more than 42 million tourists in 2015, according to the Las Vegas Convention and Visitors Authority.

And Aguero knows there are more numbers stacking up in Las Vegas’ favor as a major-league city. In the past year, 2,061 new businesses opened in Southern Nevada; the population grew by 2.21 percent in 2015, ranking Las Vegas as the fifth-fastest growing metropolitan area in the nation, according to the U.S. Census Bureau; visitor spending exceeded $22 billion; and McCarran International Airport annually ranks as one of the nation’s 10 busiest airports.

There are several strong economic indicators that show Las Vegas is on the rise and ready for the major leagues. Among NFL cities — excluding Oakland and counting New York, which has two teams, as one market — Las Vegas would rank 24th out of 31 with a median household income of $52,070, according to figures researched by Applied Analysis.

“The economy is the best it has been in 10 years,” Aguero said. “In population growth, we’re the fifth-fastest growing metropolitan area in the United States. In employment growth, I think we’re in the top three in the country relative to that. We’ve had 2,000 businesses open up in the past year alone. Visitor volume is at the highest level we’ve ever seen. So the combination of those things, if you ask whether the market is trending in the right direction, the answer is absolutely yes.

“The 15 percent of people who put a head in a bed on any given night don’t live here full time. That tourist volume means essentially every weekend is a Super Bowl relative to tourists. That 15 percent is often left out in a lot of the market-to-market comparisons that are out there, and I think it’s pretty viable.”

The visitor element is what makes Las Vegas unique as opposed to other small-market NFL cities.

“The NHL gave us a vote of confidence that this is a viable, vibrant market,” said Steve Sisolak, the Clark County commissioner and a member of the SNTIC. “Once that glass ceiling was broken, and it was broken by Bill Foley and the NHL, other professional franchises and sports will look at Las Vegas.

“I clearly think we can support both teams. I absolutely believe it. If Green Bay can support the NFL, Las Vegas can support it. And I’m a lifelong Green Bay fan. I’m an owner of the Packers because I’ve got one share. I think framed it was $499 for one share. I got it as a gift for Christmas.”

Of course, the publicly-owned Packers are a historic franchise with four Super Bowl titles. Las Vegas would rank as the NFL’s fifth-smallest media market at No. 40 — ahead of Jacksonville (47), New Orleans (51), Buffalo (53) and Green Bay (68).

Las Vegas has surpassed 15,000 deposits on season tickets for the hockey team’s first season in 2017-18, a persuasive factor that convinced the NHL to expand.

Atlanta Falcons owner Arthur Blank is one of several NFL executives, a group including commissioner Roger Goodell, who have asked to see economic and population numbers that support Las Vegas, America’s largest city that does not currently field a major-league team.

“I think whether or not there are enough people in Las Vegas to support a team is a question,” Blank said in May. “I have not seen the data on that to support it or not support it.

”It’s certainly a dynamic market. It’s a growth market. It’s got tremendous tourism, a lot of convention business. So it’s certainly a consideration. We’ll see what the facts bear. I want to see all the research on whether (Las Vegas) can support a franchise or not.”

The usual knocks against Las Vegas are that it’s a transient 24-hour casino town that lacks a sense of community. The San Diego Chargers, who have enjoyed strong support for decades, alienated their fans last year by threatening to relocate to Los Angeles.

“Remember when (quarterback) Philip Rivers said he thought the Chargers were playing a road game against the Steelers last year in San Diego?” Don Logan, president of the Las Vegas 51s baseball team, said. “But when the team gets rolling here, the local community gets fired up. No doubt, the NFL would be phenomenal here.

“The sponsorship elements are going to be the big deal. There’s big money in sponsorships. But I think the NFL is more driven by the TV deals.”

Triple-A baseball has thrived in Las Vegas since 1983, during a time when countless other minor league teams have set up shop and eventually closed because of a lack of support. But the NFL is a different animal, and it’s a monster that drives the sports betting business in the city.

Andy Abboud, Las Vegas Sands’ senior vice president of government relations and community development, said “very loyal” Raiders fans from the Bay Area and Southern California will help an NFL team thrive in Las Vegas. But that aspect of support would be an added benefit instead of a building block.

“The support for the Raiders alone, in terms of the local base, is very significant. There’s incredibly high interest from the citizens of Southern Nevada to buy season tickets for the Raiders,” Abboud said. “We’re not concerned about any sort of ability to fill the stadium. We think that the fan base is there and the interest of the local community is there. It’s a no-brainer.”

Davis is becoming more convinced of that as he plots the Raiders’ future.

“We’re not counting on people flying in from Oakland or Los Angeles. That might sound good,” Davis said. “But we want to make it a local thing.”