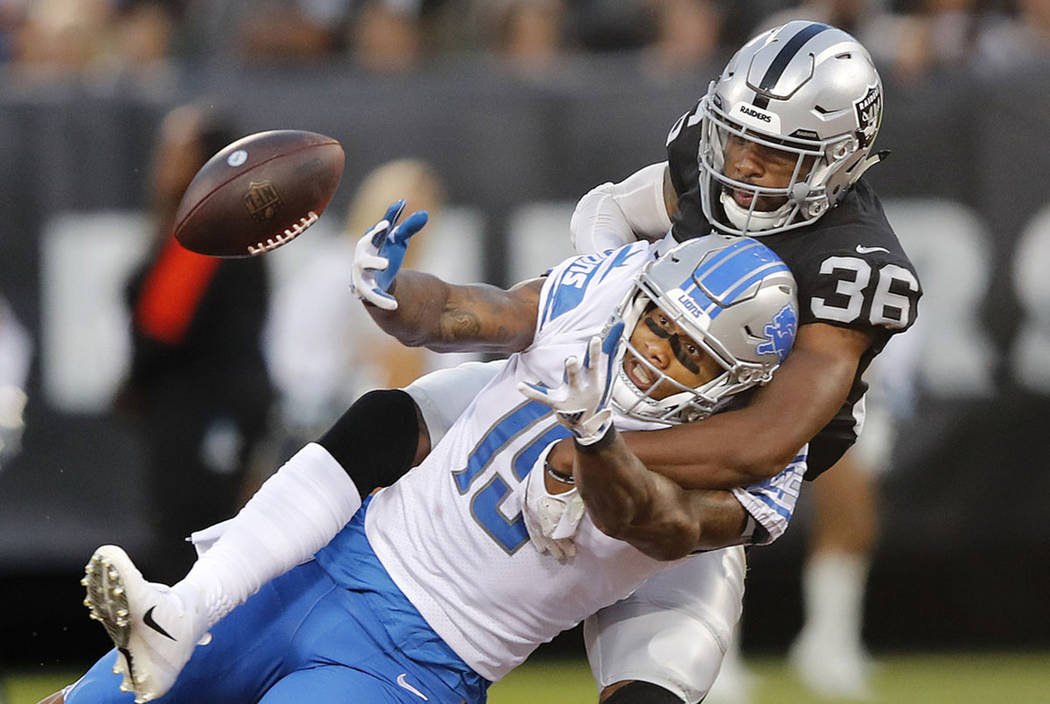 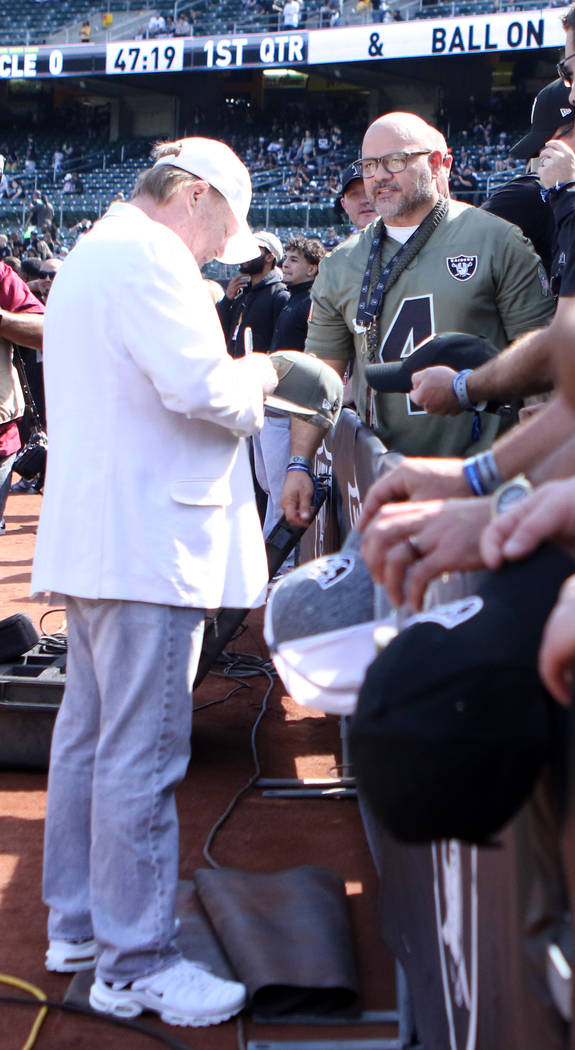 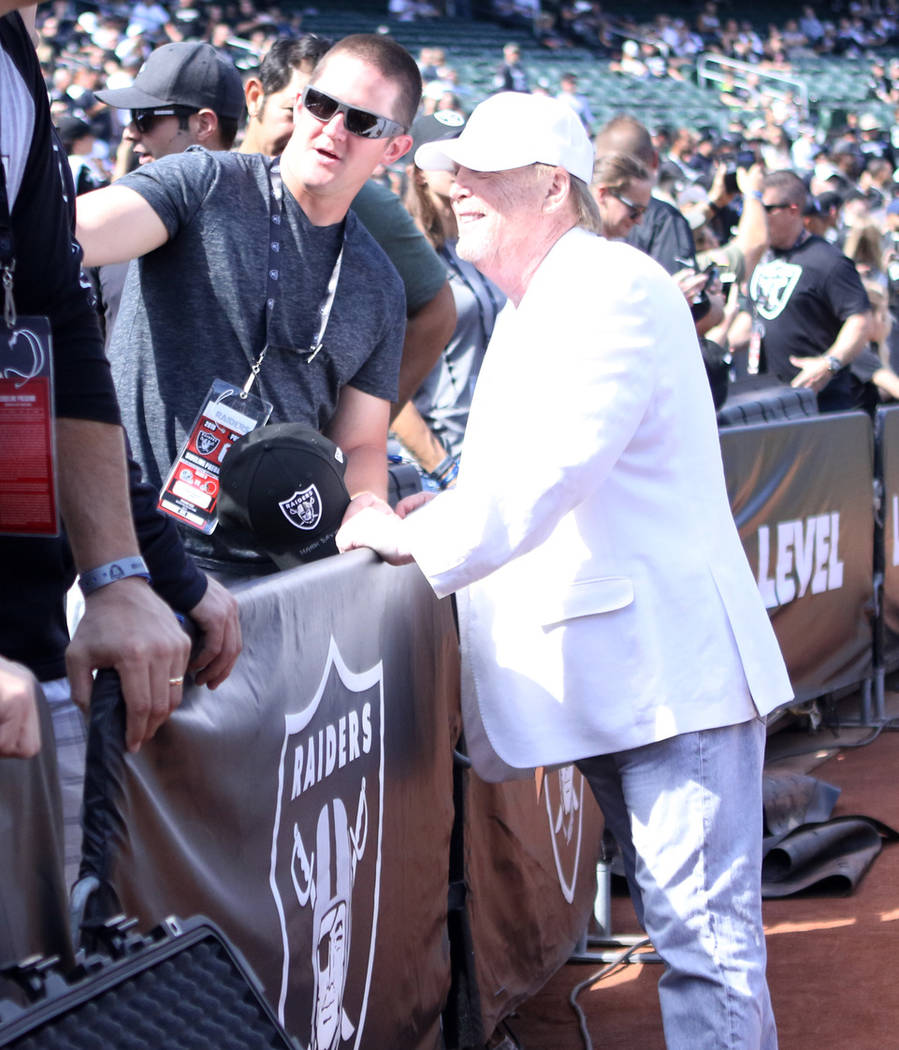 Oakland Raiders owner Mark Davis poses for a photo with Clark County fireman Robert Marquis in Oakland, Calif., Sunday, Sept. 30, 2018. First responders were invited to the game against the Cleveland Browns prior to the anniversary of the October 1 shooting that took place in Las Vegas. Heidi Fang Las Vegas Review-Journal @HeidiFang

OAKLAND, Calif. — Daryl Worley is back. And that means a difficult decision awaits.

The Raiders cornerback was reinstated Monday after serving a four-game NFL suspension. His discipline stemmed from an April arrest that occurred prior to his signing. Soon, the team must create roster room in a corresponding move when activating him onto the 53-man roster.

Worley returned to the Raiders under a temporary roster exemption. Essentially, Worley can practice this week as a 54th member of the team before a roster spot must be cleared no later than Saturday afternoon.

He served as the team’s top reserve cornerback during spring workouts and training camp. The secondary remains unsettled entering Week 5, as the team has employed an in-game rotation at both cornerback and safety.

“We like Worley, the job that he did in the offseason,” Gruden said. “He’s a good player. We’ll see where he is, and we’ll make any adjustments that we’ll need to make in a few days after we see where he is.”

Lynch a Hall of Famer?

Lynch logged 20 carries for 130 yards in Sunday’s 45-42 win over the Cleveland Browns. He added three receptions for 27 yards. According to Pro Football Focus, he forced 11 missed tackles. His 22 missed tackles forced leads all NFL players.

“If that’s not a Hall of Fame back, I don’t know what is,” Gruden said. “Honestly. What he did (Sunday), what he’s done since he’s been here is incredible. He wants the ball more and more and more. We got a good back over there in Doug Martin who is ready to roll. Doug can’t get on the field. This guy does not want to come off the field.

“He picked up six or seven blitzes yesterday, too, that no one is talking about. … Some of the runs he’s making, some of the finishes and determination he is putting on tape is unbelievable. I don’t see many guys in football running like this.”

— The Raiders hosted 30 first responders from Las Vegas police and fire department agencies at Sunday’s game. It was the second time the franchise has done so, having hosted first responders on Oct. 15, 2017, for a game against the Los Angeles Chargers. Owner Mark Davis visited the first responders Sunday, signing autographs and expressing his gratitude. The team released a statement Monday afternoon on Twitter: “One year after the Las Vegas shooting, we remember the victims and those who have worked tireless since to provide a sense of comfort and community. #VegasStrong”

One year after the Las Vegas shooting, we remember the victims and those who have worked tirelessly since to provide a sense of comfort and community. #VegasStrong pic.twitter.com/t6sQmcCXDi

— Gruden expressed a playful bias when discussing some of the officiating calls from Sunday. Namely, he disagreed with a roughing the quarterback penalty on defensive end Arden Key and a forward-progress call on Lynch that may have short-changed a touchdown. He supported a forward-progress call that negated a Derek Carr lost fumble and a ball spot overturn on the Browns’ failed third-and-2 conversion late in regulation. “The calls that go against us, I don’t like,” Gruden said. “The calls that do, I do.”