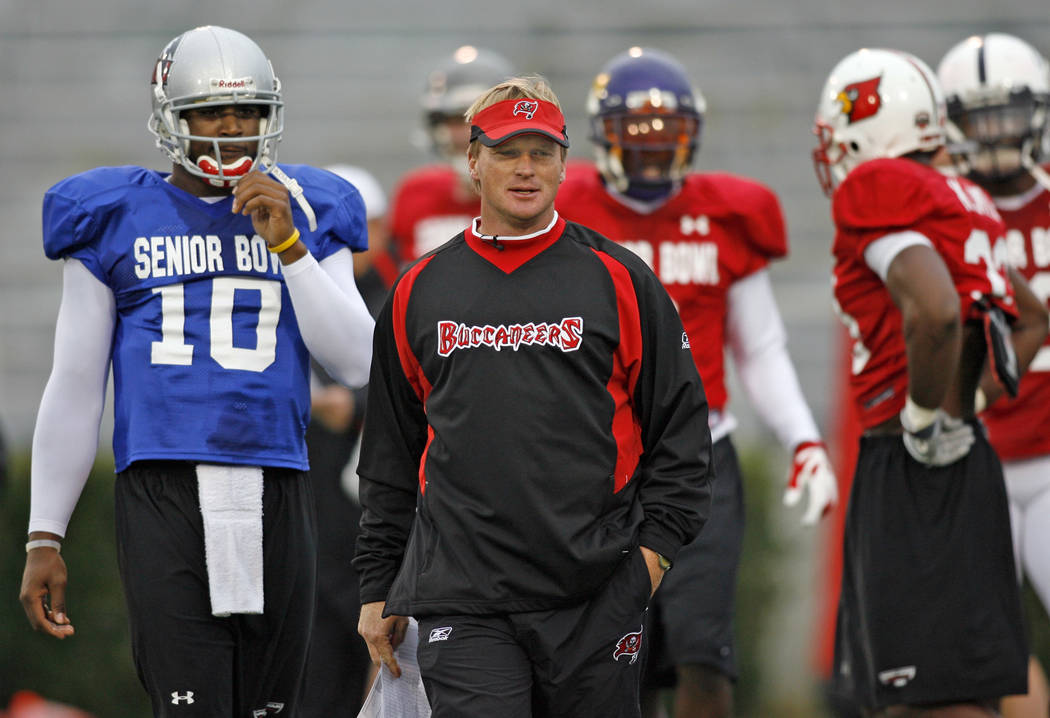 ALAMEDA, Calif. — The Raiders gained a valuable resource Monday to use when sifting through dozens of prospects in the 2019 draft class.

Jon Gruden and his staff will coach the Senior Bowl, a development many within the organization hoped would surface.

The Raiders and San Francisco 49ers officially were named as coaching staffs for the annual all-star showcase game in Mobile, Alabama, on Jan. 26. The Raiders will guide the North team, and the 49ers’ staff will coach the South.

The opportunity enables the Raiders to hold meetings, oversee practice drills and coach a game with some of the nation’s top seniors.

Which teams coach the game is determined by draft order among teams with a full coaching staff. The Arizona Cardinals and New York Jets own the top two selections in April but both fired their coach. The 49ers choose at No. 3. The Raiders own the fourth overall pick.

“The last time I coached the Senior Bowl as the head coach of the Raiders,” Gruden said, “we drafted (linebacker) Eric Barton and (defensive tackle) Rod Coleman (in the fifth round). It was a great tool for us in Tampa and in Oakland. We have three picks in the first round. We also pick in every other round, and we also have the potential to add players after the draft.

“It will give our coaches, I think, a chance to go to Mobile in front of the entire NFL and show what kind of coaching staff we have — show the energy and enthusiasm that we have as a staff. We are going to sell ourselves to the players. If we can eliminate two or three players by coaching the Senior Bowl, sometimes that is just as important as finding two or three guys that you really want. … We have to do a good job in this draft, and the best way to do it is to be as close as possible to the players.”

Mike Mayock, hired as general manager Monday, is no stranger to the Senior Bowl, having served as the NFL Network’s lead draft analyst.

“I’ve always felt like I did a better job (as an evaluator) when I got to know the players a little bit,” Mayock said. “Take (Philadelphia Eagles quarterback) Carson Wentz, for instance. He went to the Senior Bowl (in 2016) and kind of announced himself. I got to know him a little bit there. Then we go to the combine, and I interviewed him and spent some time with him there. Go to Fargo, North Dakota. …The more you find out what makes a kid tick, the better you can evaluate that kid.

“I came away from Carson Wentz like banging the table at that point just because I felt so strongly about the kid. That’s just an example. I think when you get to the Senior Bowl and you get the access to these kids and the opportunity to see both teams practice, how they practice, how they retain information, how they process information, both on an install basis and mechanics on the field, I think it’s just a huge advantage.

“We’ve been talking about this for several days now, hoping that this would come together.”