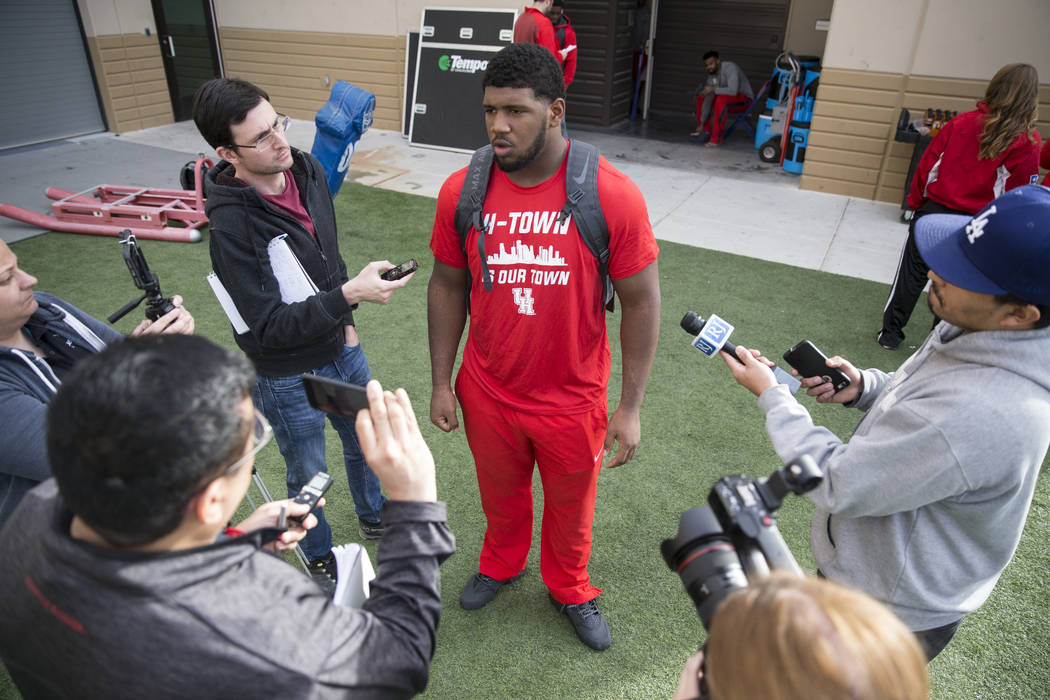 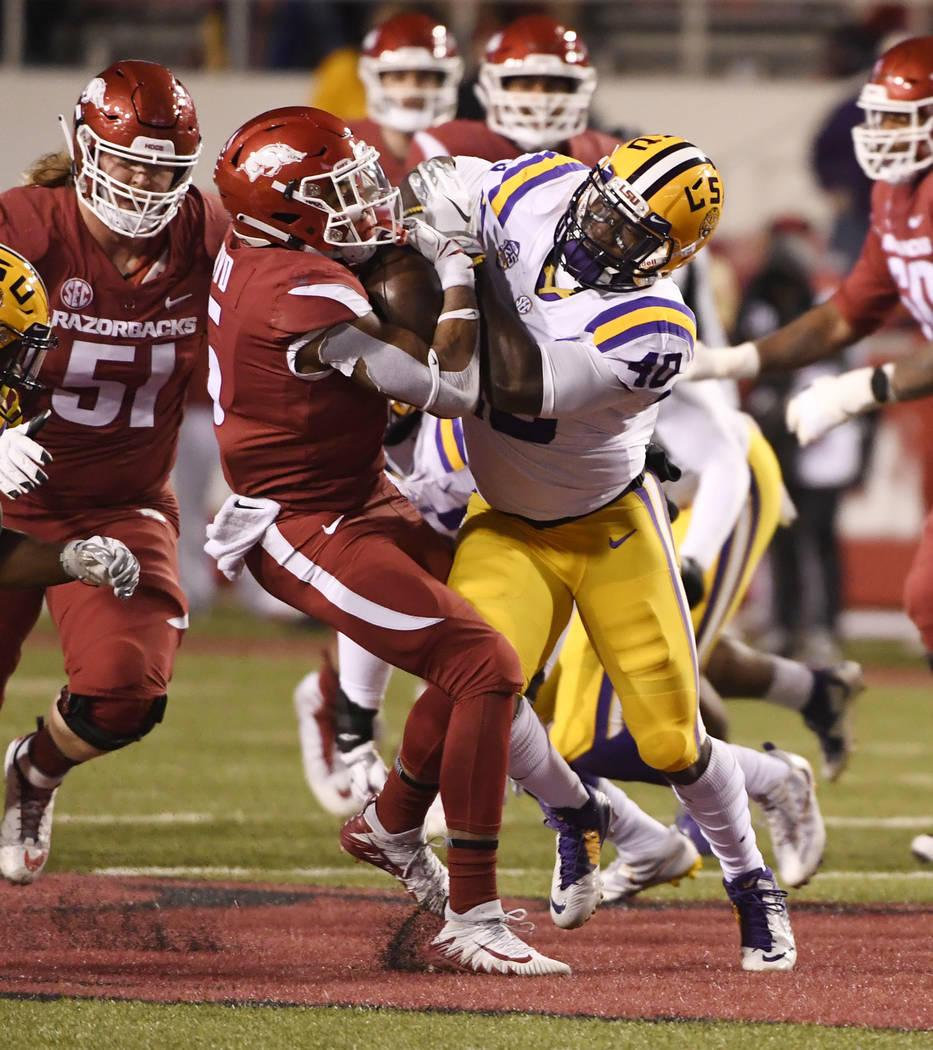 Arkansas running back Rakeem Boyd is tackled by LSU defender Devin White during the second half of an NCAA college football game, Saturday, Nov. 10, 2018, in Fayetteville, Ark. (AP Photo/Michael Woods) 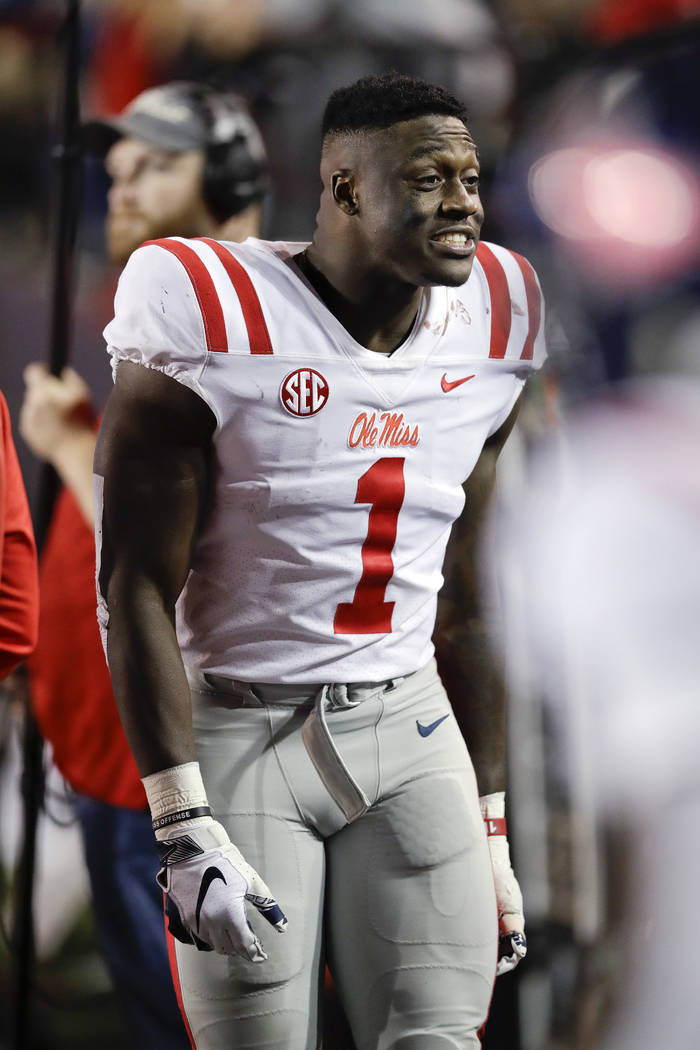 It’s been a rough few weeks for Raiders fans who believe tanking the rest of the season will lead to a better future for the silver and black.

The tank supporters got their wish when the Raiders had the No. 1 overall pick with a 1-8 record, but lost it a week later after Daniel Carlson’s last-second field goal gave the Raiders a win against the Cardinals. That created a logjam at the top with the Raiders, Cardinals and 49ers all tied at 2-8 for the worst record in the NFL.

San Francisco currently has the No. 1 pick based on weakest strength of schedule. The Cardinals are slotted second and the Raiders dropped to third.

To make matters worse, Raider Nation had to watch former Raiders Amari Cooper and Khalil Mack have standout performances on Thanksgiving to lead their respective teams to victories.

Cooper’s Cowboys and Mack’s Bears keep winning and that’s not a good thing for the Raiders, who own the two NFC teams’ first-round picks.

Not a good time to be a “Team Tank” Raiders fan, especially with quarterback Derek Carr saying he wants to mess up the draft.

But don’t worry, tankers. There’s plenty of talent in the upcoming NFL draft. Here are a few prospects to keep an eye on:

If the Raiders stay at No. 3, a team could be looking to trade up to select Oregon quarterback Justin Herbert. The Raiders should listen to offers.

Carr has played well the past month. They’re better off giving Carr another year or wait to take a QB to develop in the later rounds.

Defense should be the top priority for the 2019 draft, and if Oliver is there at No. 3, the Raiders would be wise to take the defensive tackle who was compared to Rams star Aaron Donald by ESPN’s Mel Kiper Jr.

Oliver got to know Las Vegas when he played in the Las Vegas Bowl against San Diego State during his freshman year. He was a game-wrecker then and he’s much better now.

The Raiders could have a dominant interior defensive line if rookies Maurice Hurst and P.J. Hall blossom with the addition of Oliver.

Carr just played a game with Marcell Ateman and Seth Roberts as his top two wide receivers. The Raiders need to help out their quarterback by adding a much needed playmaker.

Brown could be that guy, but it’s hard to predict where Brown will land. Some pundits are enamored with the Ole Miss wideout and have him going inside the top 15. Others aren’t sold and have him outside the top 20.

Brown was compared to Steelers wide receiver JuJu Smith-Schuster by NFL.com’s Daniel Jeremiah. Brown has size and strength to create separation down the field.

Carr would love to have a deep threat. He doesn’t have that on this current Raiders roster.

Nowadays it’s not smart to invest high on linebackers because the NFL has turned into a pass-heavy league.

The run-stopper linebacker who averages 100 tackles per season are going extinct. But White isn’t a traditional linebacker. He’s the complete package.

White plays fast and has a nose for the football. The perfect “Gruden grinder” who can sack the quarterback and make the key stop on third-and-short.

The Raiders haven’t gotten much production from their linebackers this season. White would fill that void.